It's happening again. Liverpool are weighing up a move for one of Southampton‘s best players. It's an annual event that the Reds evidently take seriously. L'Equipe are claiming Mario Lemina could be the latest player to swap the South Coast for Merseyside, with Jürgen Klopp and recruitment team at Anfield weighing up a summer move.

The midfielder would be the seventh player to make that particular move since the summer of 2014, following in the footsteps of Rickie Lambert, Adam Lallana, Dejan Lovren, Nathaniel Clyne, Sadio Mané and Virgil van Dijk.

The latter two, both signed under Klopp, have been revelations since their moves to Anfield. Could it be three in a row for the Liverpool manager?

According to various outlets, the Reds are in the market for midfielders. Houssem Aouar.

If these reports are to be believed it appears Klopp wants to further bolster his options in the middle of the park, even though Naby Keïta is already arriving in the summer.

The uncertainty surrounding the future of Emre Can no doubt plays a part in this. The Liverpool midfielder is out of contract in the summer and is a Juventus and Bayern Munich transfer target. That, coupled with Jordan Henderson and Adam Lallana's injuries woes, means midfield reinforcements are on the agenda.

Furthermore, Georginio Wijnaldum's performances for most of the season have been a cause for concern. The former Newcastle United man can, at times, go missing. Liverpool have title aspirations, they can't be carrying passengers.

The Gabon International only joined Southampton in the summer for a fee rumoured to be in the region of £15million. Though the Saints are struggling they're only outside of the relegation places on goal difference and the 24-year-old has been one of their standout performers.

However, it's not as though the Reds are reacting off the back of a few good months in the Premier League. Back in the summer of 2015, Lemina, then at Marseille, was linked with a move to Liverpool before ultimately heading to Juventus on deadline day.

His time in Turin was disappointing but there's no shame in being unable to break into a midfield containing Paul Pogba, Claudio Marchisio, Sami Khedira. The former was sold to Manchester United in the summer of 2016 but Juventus moved swiftly to sign Miralem Pjanić.

It's only been since his move to Southampton, and his exposure to first-team football on a regular basis, that fans have been able to see glimpses of a player who was earmarked as a special talent at a young age while at Lorient and tipped to one day be a starter for France.

In a recent CIES Football Observatory weekly news letter, Lemina was named as the ninth best dribbler in the top five European leagues. It's his ball carrying ability that might be a key factor in Liverpool's apparent desire to sign him. 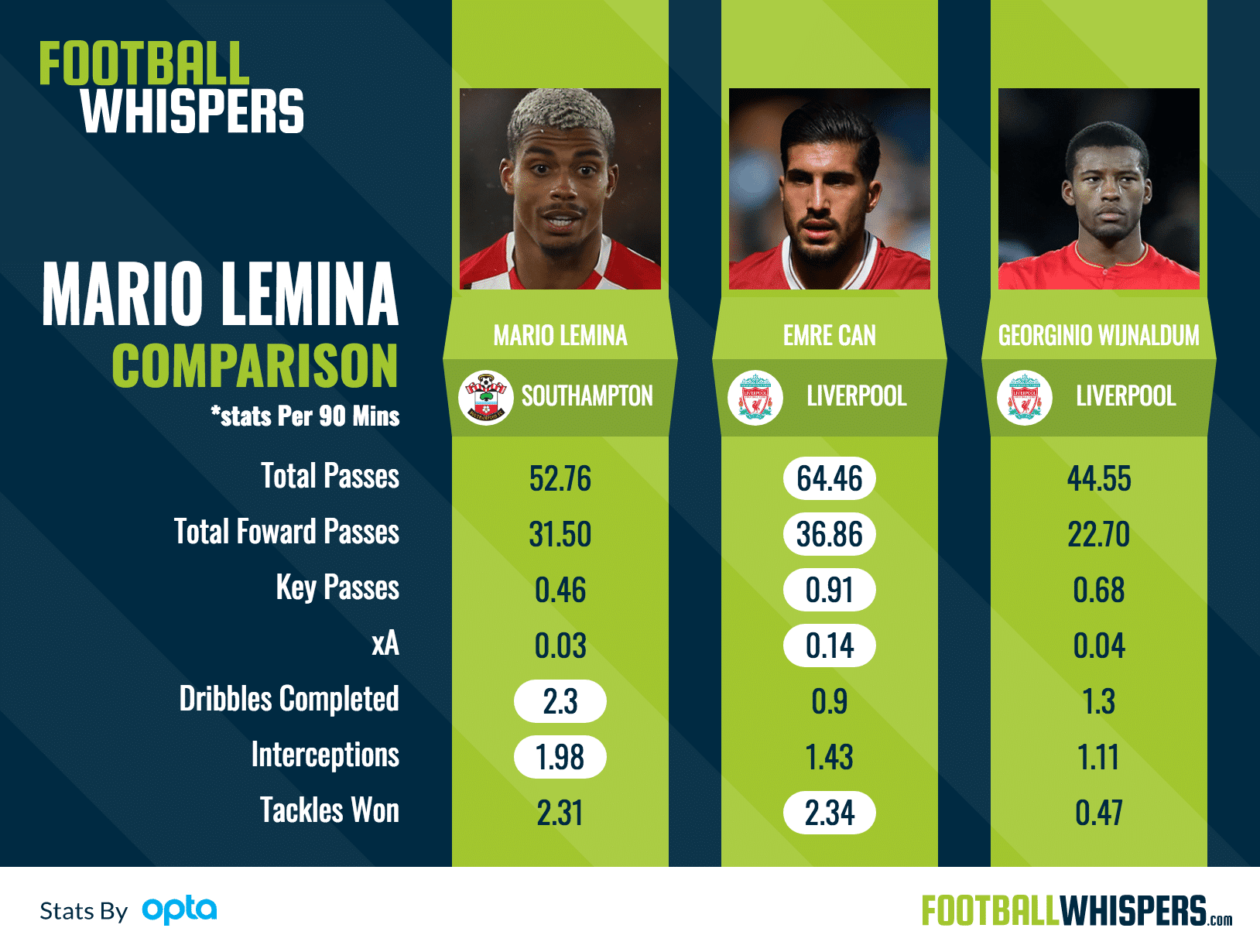 A bit of context before reading too much into the above graphic. Lemina primarily plays in a midfield two which will impact what he's instructed to do on the pitch, and it will no doubt differ to Can and Wijnaldum who play in a three.

Furthermore, Liverpool average more possession in their matches, 56.4 per cent to Southampton's 52 per cent, and play 110 more passes per 90 minutes. All things to take into account.

Finally, Can's stats are skewed slightly because he's played as the deepest midfielder at times this campaign to fill in for the injured Henderson.

He's being compared to Wijnaldum and Can because, if he arrives, Lemina will likely play on the side of a midfield three.

Of Lemina's 52.76 passes per 90, 59 per cent of them go forward which isn't too dissimilar too Can's average of 60 and is clear of Winaldum's 50 per cent. The Southampton man comes bottom when looking at key passes and expected goals assisted but it's not necessarily his duty to create for the Saints.

When it comes to defensive work he's not shy. No Liverpool midfielder wins more tackles and interceptions per 90 minutes.

You can't take anything away from Lemina's dribbles completed stat. Only Mohamed Salah (2.4) averages more and the 2.3 puts Lemina comfortably ahead of Mané (1.9) in second place for Liverpool. It's here he really shines.

He's a progressive midfielder. He picks the ball up, beats players and gives it to his more dangerous team-mates. People could say it's similar to what Wijnaldum does in the Liverpool system, and at times he probably does, but overall the Dutchman seems to be more of a recycler. He'll keep play going but it's rare to see him aggressively attack the opposition.

The 24-year-old's lack of goals shouldn't be a concern. With Salah, Roberto Firmino, Mané, Keïta and Alex Oxlade-Chamberlain in the team there's always going to be a goal threat. So don't write off the former Marseille man because of that.

Lemina's dribbling ability would come in handy for Klopp's men in a number of situations. Against the low block, something Liverpool often face, he'd be able to bypass the defensive lines and create space for others while against teams who press high he's able to take players out of the game and get the Reds onto the counter. 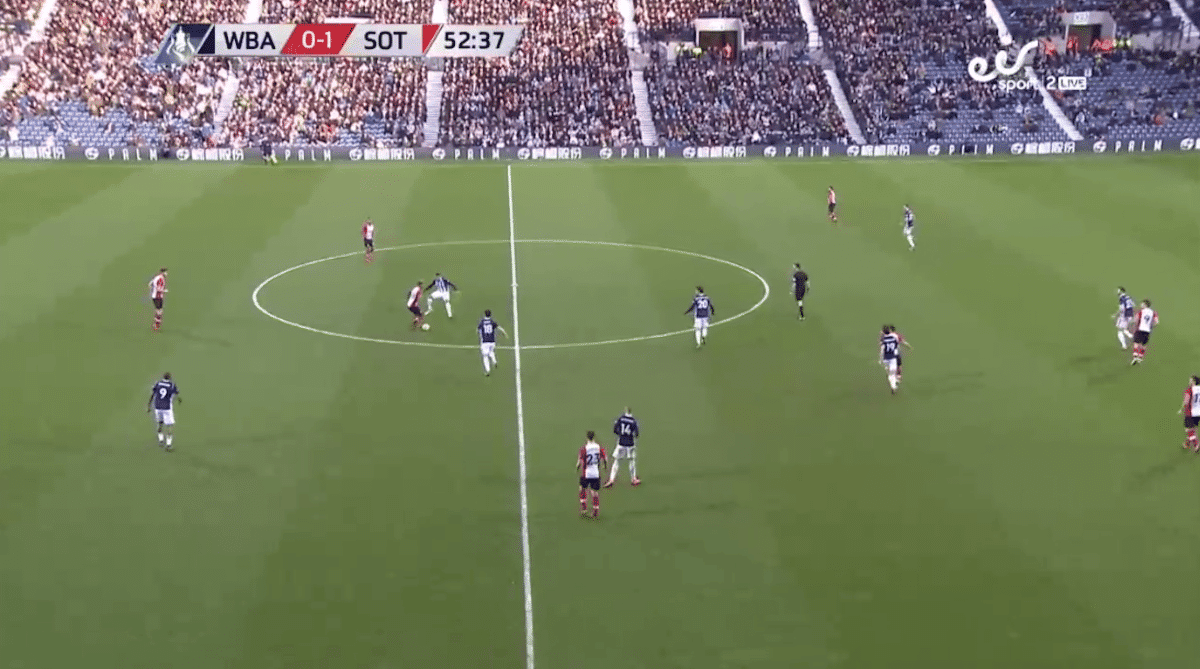 In the picture above you see Lemina in possession against West Brom. He's quickly pressed from both sides and there's no easy pass forward. Now, Liverpool as a team are better at creating passing angles but not every player is press resistant. Both Henderson and Can have found themselves in this situation at times and they've been forced to go backwards.  This then allows the opposition to get back into a defensive shape.

Lemina, undeterred by the fact two men are closing him down and West Brom have players in position to hit Southampton on the break, uses his quick feet to dance past two players before playing a pass to James Ward-Prowse on the right. A better pass might've been to Pierre Emile Højbjerg, with the former Bayern Munich man showing for the pass between the lines.

During the defeat to Liverpool you see just how good Lemina is at retaining possession. The Reds, wearing orange, are one of the best teams in the league at pressing the opposition into mistakes. Yet in the above you see him hold off Firmino and waltz past Can before evading another attempted tackle from the Brazilian to keep the ball for Southampton.

Lemina isn't the most glamorous of names, and Liverpool fans must be getting tired of shopping at Southampton, but as a cog in a new look midfield he might just be a shrewd signing. He'd allow Keïta to do Keïta things and Jorginho would be able to influence things in the final third knowing Lemina was sweeping up behind. He could be another underrated gem added to the Liverpool squad.