It was an area of the field Arsène Wenger consistently ignored in its significance, but Sven Mislintat isn’t messing around and, despite working within what is expected to be a limited transfer budget, Arsenal’s head of recruitment looks to be working on a sizeable overhaul in defence.

Departures, high-profile ones at least, are yet to be fully disclosed but already this transfer window veteran right-back Borussia Dortmund.

The versatile 22-year-old has enjoyed a breakout season, two years after he was part of the Germany squad to claim a silver medal at the Rio Olympics and, along with Söyüncü, ticks all the boxes of being young, intelligent, tall (both are 6ft 2ins), relatively affordable and with his best years well ahead of him.

Who is Lukas Klostermann?

Born in Herdecke, a town in the west of Germany less than eight miles from Dortmund (which may or may not have originally brought him to Mislintat’s attention) Klostermann served his initial football education at local club FSV Gevelsberg before he was picked up by Vfl Bochum in 2010 in his mid-teens.

He comes from strong sporting stock as his father was a 110m hurdler, who once finished sixth in the German championships, while his younger sister Lisa is also a footballer and has represented Germany at Under-17 level.

Klostermann mixed athletics with football in his youth where, due to his height he started life as a goalkeeper. As he told Kicker in 2016: “The coaches decided because I had pace, it was a pity to put me in goal.”

After playing in numerous positions, Bochum identified his defensive potential and he soon began to work his way up the youth ranks at the club before making his debut in the 2.Bundesliga at the age of 17 years and 283 days.

Emphasising the faith and belief Bochum had in his talent, Klostermann displaced club stalwart Paul Freier at right-back, unfortunately that confidence in his ability didn’t translate on the contract table and at the end of the 2013/14 season he failed to sign professional terms, allowing ambitious Leipzig to move in.

Klostermann’s debut didn’t exactly go according to plan as he scored an own goal in the DFB Pokal before making his league bow in December and gradually worked his way to become a fixture on the right-hand side of defence.

The 2015/16 campaign was when Leipzig earned promotion to the Bundesliga with Klostermann making 31 appearances, earning a call-up to the Germany Olympic squad where he made six appearances – at left-back – as they claimed the silver medal in Rio while also attracting interest from Tottenham and Arsenal.

However, his first campaign in the top-flight was curtailed by a cruciate knee ligament injury and further complications with the issue, which saw him make just one appearance, somewhat fittingly against Dortmund.

The most recent season was therefore his first in the Bundesliga but he has held down the right-back slot, pushing previous incumbent Bernardo to the left, in making 25 league starts, four in the Champions League and five in the Europa.

In pure aesthetics, Klostermann is a very un-Arsenal defender, well the Arsenal we used to know. He is tall and reasonably strong in the air, with a 55.17 success rate in aerial duels, although given his size that could perhaps be a little higher.

However, what stands out the most and isn’t always becoming of modern full-backs, is his defensive aptitude.

He’s quick, not Dani Alves rapid, but has a long stride coupled with a speed of thought which allows excellent anticipation of where the danger lies and how he can win back possession. His tackling accuracy was an impressive 85 per cent.

As the play below shows, Wolfsburg attempt to break having won the ball back but Klostermann darts forward to press and make a vital interception. 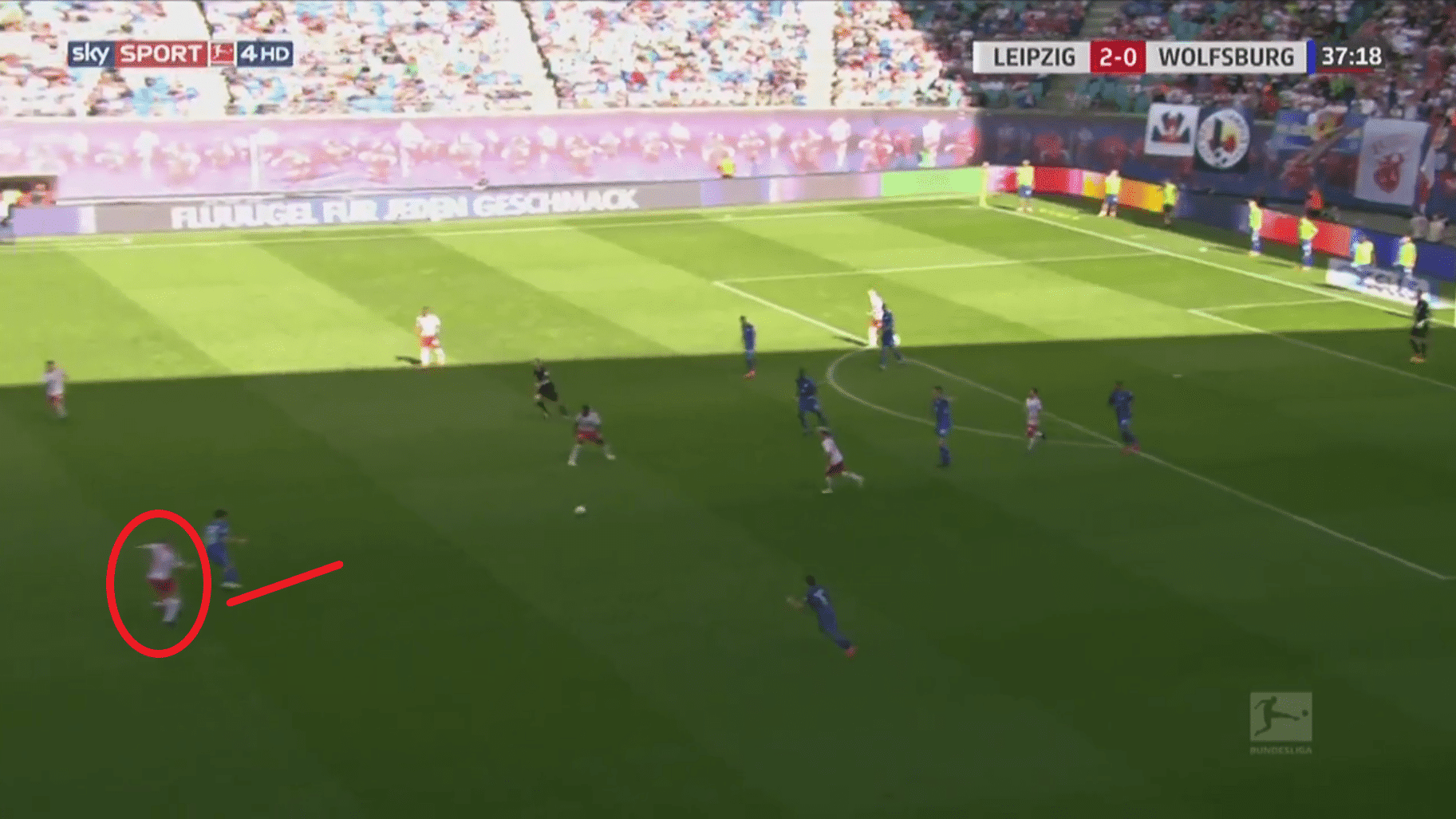 Positionally, he appears adept in maintaining a defensive line, conscious of not isolating his team-mates while fully aware of the opposition players around him. He doesn’t tend to get drawn to the ball and is always looking up and checking his shoulders for the full picture.

It would be easy for him to charge in and challenge for the aerial ball below but if he loses it, it could lead to a 2v1 situation and a likely goal-scoring opportunity for Stuttgart. Klostermann hangs back, reads the touch and make the tackle. 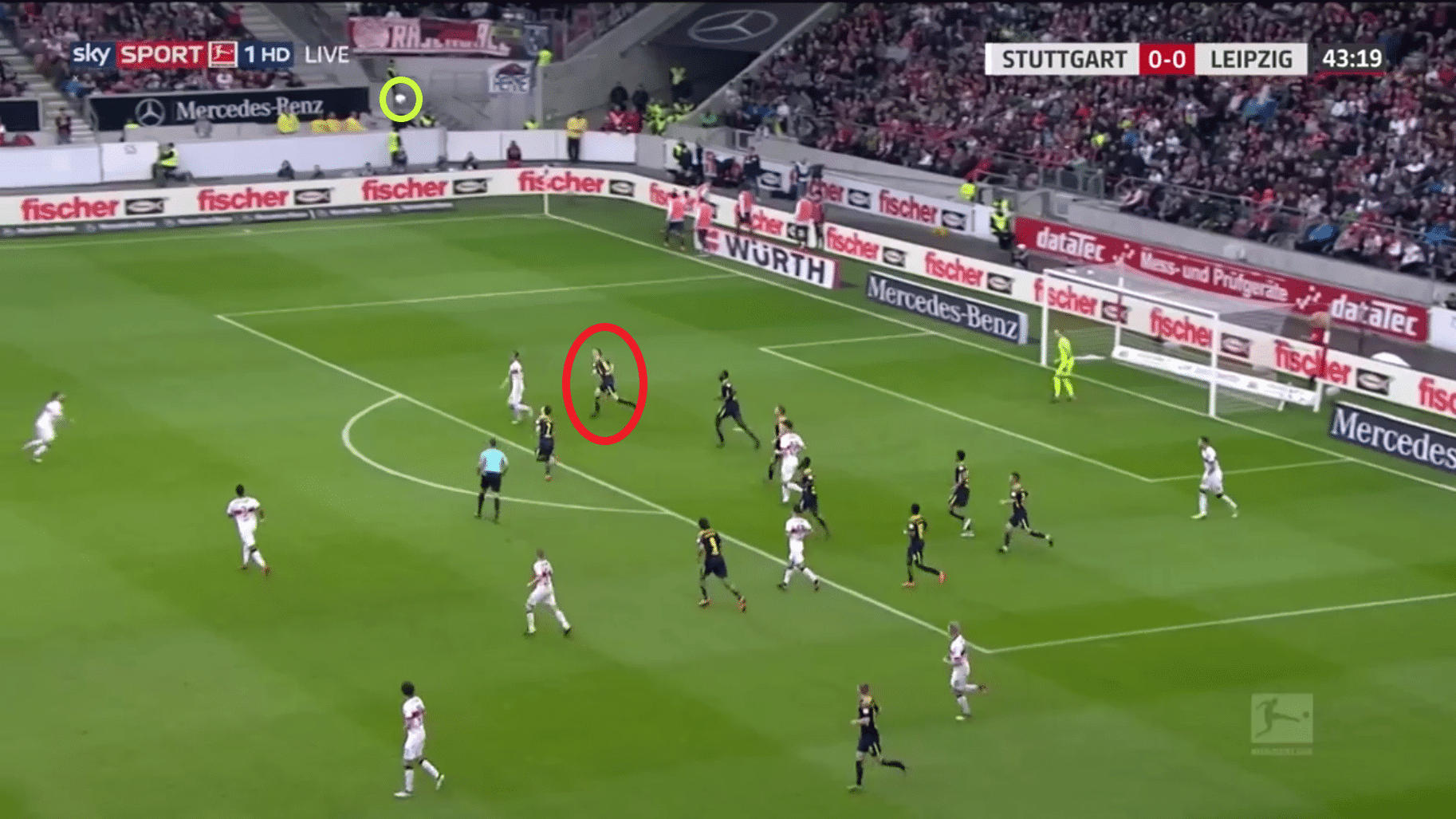 At the other end of the field, meanwhile, Klostermann looks a decent crosser of the ball and while maybe not in volume, his technique both from a standing position and first-time, at pace, is excellent.

Against Köln, he’s forced wide but despite being at an awkward angle hits it first time on the ground, beating the first defender and into the danger area just outside the six-yard box, only for Emil Forsberg’s touch to let him down. 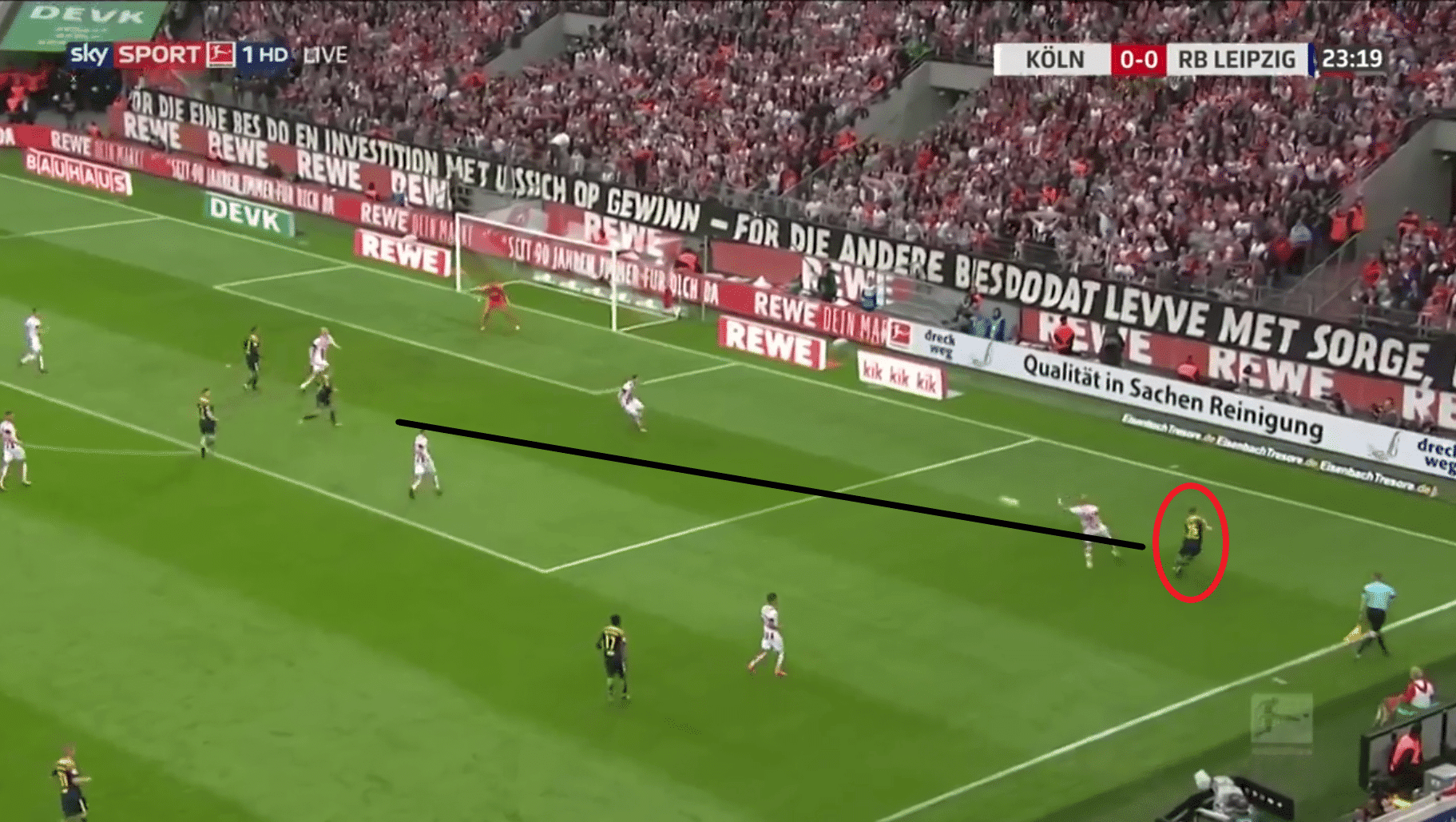 His 0.65 open play key passes per 90 (0.77 in the Champions League) ranked him 33rd among all Bundesliga defenders.

Klostermann isn’t yet a full-back to get you out of your seat. His defensive game appears stronger than his attacking one, which to most clubs could be considered a slight red flag, but to a club like Arsenal this is almost unequivocally a positive.

Unless he has space to attack in behind, the 22-year-old doesn’t like to dribble at defenders 1v1, instead reverting to a pass inside or cross, providing he’s in an advanced position.

Against Hoffenheim here, he’s forced wide by the pass but has space to run into if he chooses to attack the full-back, instead he attempts a speculative and over-hit cross into a penalty area where Jean-Kévin Augustin is outnumbered 4-1. 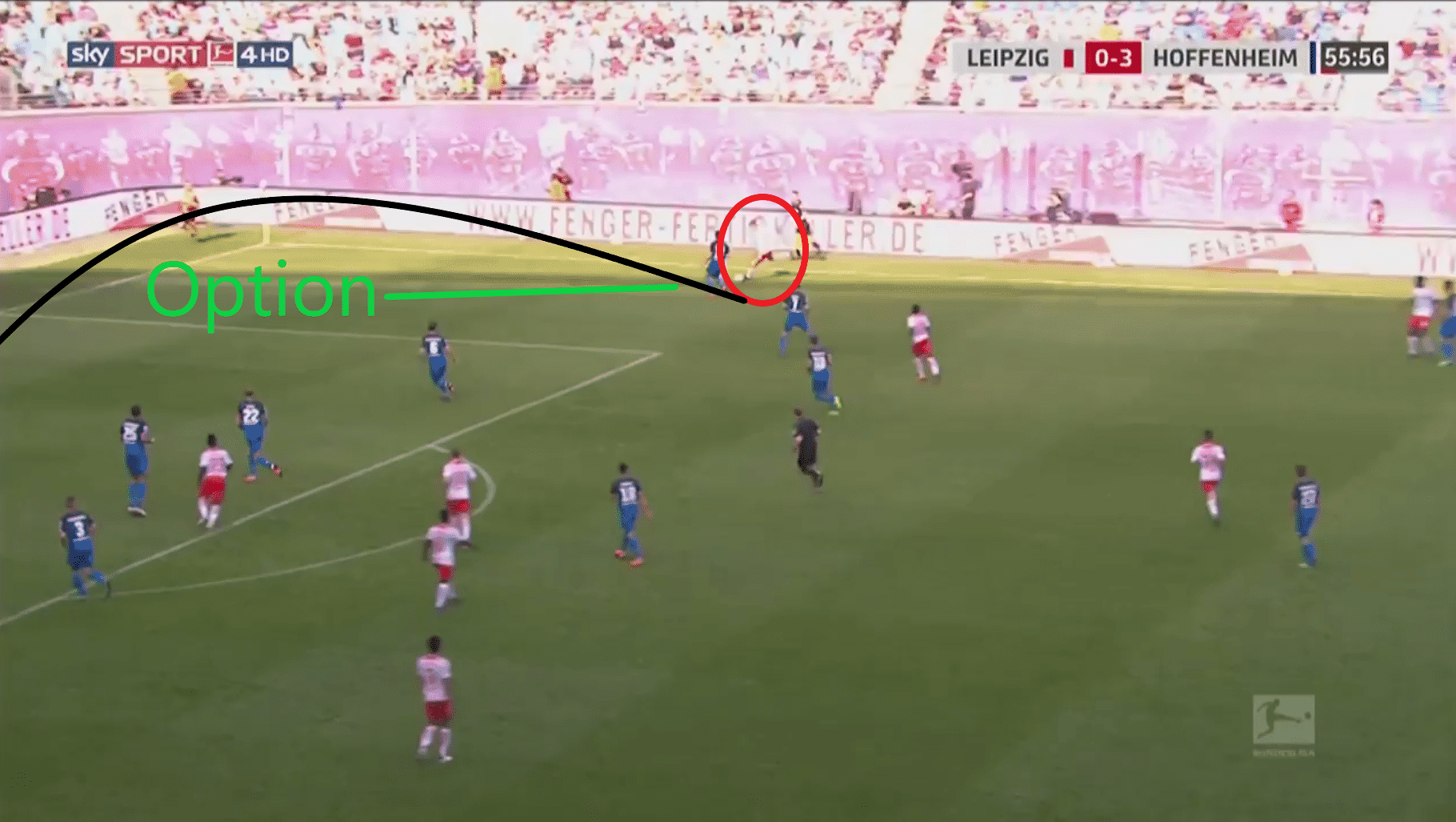 His passing could also be a little more proficient as 76.4 per cent is low for a full-back, especially when he’s completing just 29.31 per 90 minutes; for context Héctor Bellerín last season in the Premier League was 46.1 at 84.8 per cent accuracy. 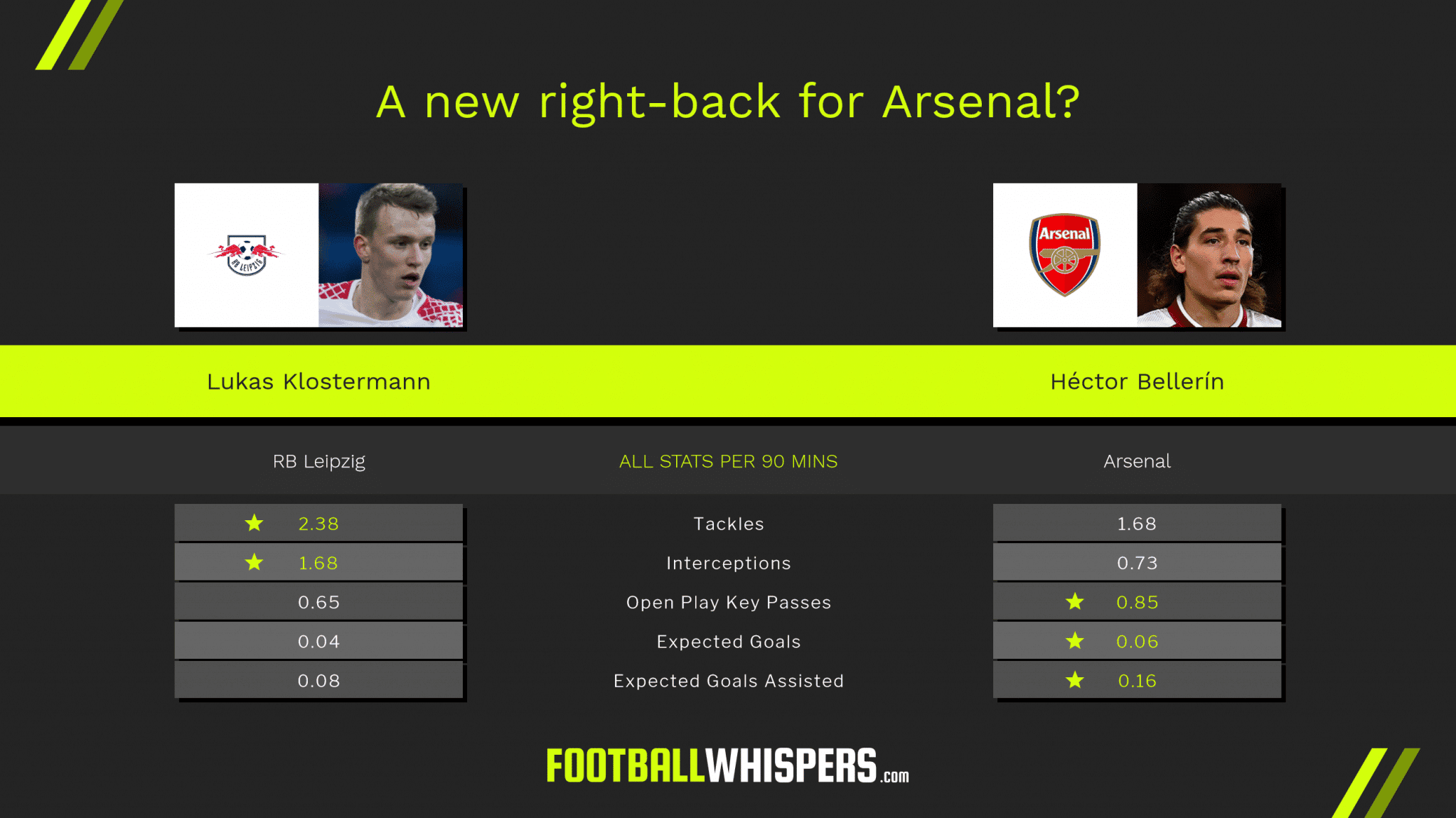 Mislintat doesn’t just look to the Bundesliga for its familiarity as it represents one of the more affordable and cost-efficient markets to shop in. Unlike France and Italy, agents tend to operate in more reasonable and realistic terms helping keep fees down and speed up negotiations.

However, that doesn’t mean that Leipzig would allow Klostermann to leave at a cut-price fee, especially after Naby Keita’s departure to Liverpool and the ever-present threat of Timo Werner attracting bids from Europe’s elite.

Klostermann’s season has greatly inflated his value which, 12 months ago following his injury, was probably in the region of £5 million but is now closer to £15m. Leipzig’s lack of Champions League football may force their hand somewhat though.

It all depends what Unai Emery’s plans are for Bellerín. Lichtsteiner is a vastly-experienced and competent full-back who will give the Spaniard plenty of competition in the short-term without necessarily requiring a starting spot every week.

Adding Klostermann to that mix, even though he can also play left-back, would create a bit of a log-jam, which means if Mislintat is serious about the 22-year-old then Bellerín's days at the Emirates are surely numbered.

If Arsenal have limited funds to play with this summer, Bellerín is a very saleable asset who perhaps hasn’t progressed at the anticipated rate and whatever Barcelona are prepared to pay could cover the cost of 2-3 additions, including Klostermann who may not make an instant impact but has all the tools to be an outstanding defender in the not-too distant future.