Leicester and Arsenal each have 14 points on the board after 9-games and both would have been expecting to make a better start to the new Premier League season. Both clubs are in the midst of a good run of form which is going to make this match even tougher to predict, but we are confident that there will be goals in Saturday's early kick-off.

Leicester vs Arsenal: Our Top Predictions

Here are our predictions for Leicester vs Arsenal.

We're backing both teams to score on Saturday just as they did when these two sides last met back in February. Both teams have scored in five of Leicester's last six matches in all competitions, while three of Arsenal's last four outings in the Premier League have also ended with both teams getting on the scoreboard.

Both of these teams have been involved in their fair share of high-scoring games of late and we're expecting at least three goals to be scored when the two sides lock horns this weekend. Five of Leicester's and four of Arsenal's last fixtures across all competitions have witnessed over 2.5 goals being scored, so you can see just why we're predicting that at least three goals will go in on Saturday.

Jamie Vardy is having a very good season in front of goal for the Foxes, netting 7-times in the Premier League alone. We're backing the former England international to get on the scoreboard once again this weekend in what should be a truly entertaining 90-minutes of football.

All the stats you need ahead of Leicester vs Arsenal

These two sides are level on points ahead of kick-off

Leicester City made the trip to Brentford last weekend and managed to come away with all 3pts. Tielemans put the visitors in front in the 14th-minute and Leicester lead 1-0 at the interval. Brentford managed to level the scorelines on the hour mark through Jorgensen but James Maddison restored the Foxes lead 14-minutes later with what turned out to be the winning goal. Daka scored four times away at Spartak Moscow in the Europa League and created Maddison's winning goal against Brentford, so Rodgers will be looking to get the striker more game time in the Premier League over the next few months.

Arsenal's last match at home to Aston Villa in the Premier League proved to be a very successful 90-minutes. Arteta's men played their best football in this game, one which they totally dominated from start to finish. Partey, Aubameyang and Smith-Rowe all got on the scoreboard as the Gunner's good form continued, and perhaps now some of the pressure has been lifted off Arteta's shoulders. Both Leicester and Arsenal have still underachieved in the early stages of the new season and both will be viewing this game as a great chance to secure 3pts and move further up the table.

Leicester: Wesley Fofana, James Justin, Marc Albrighton and Wilfred Ndidi are unlikely to face Arsenal on Saturday due to injury.

Your Questions for Leicester vs Arsenal 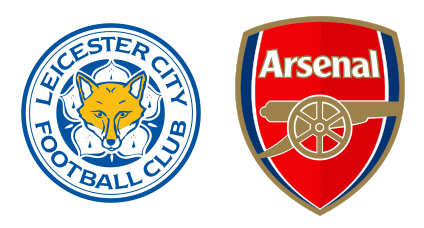