If you’re looking for a club that knows there is talent from the non-league that has the ability to make it in the Premier League, that club is surely Leicester City.

The rise of Jamie Vardy from non-league football to Premier League champion and England star is known by everyone.

And The Sun has named Oxford United’s Marvin Johnson, who was playing football in the National League with Kidderminster in 2015, as a Leicester transfer target. 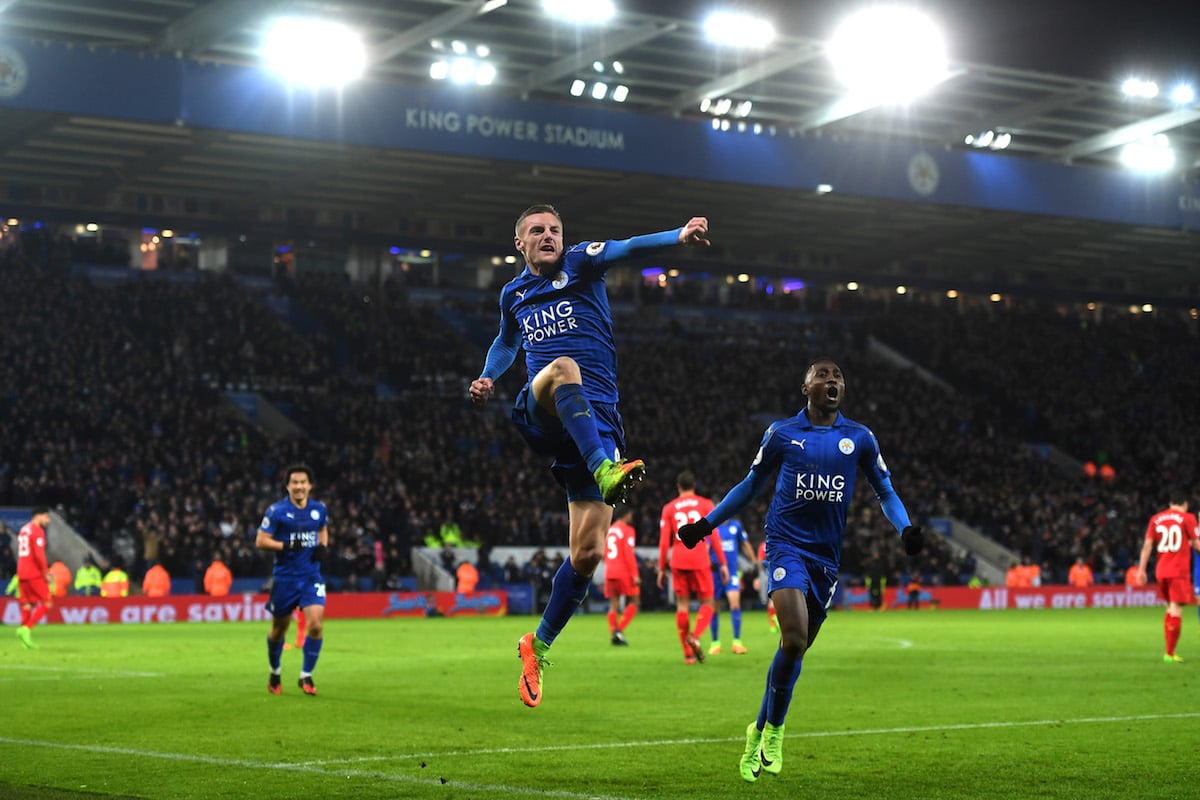 READ MORE: Jamie Vardy And The Non-League Wonders Who Made It To The Top

Who is Marvin Johnson?

Johnson came through the ranks at Solihull Moors, and had a loan spell at Coleshill Town.

In 2011, he moved to Romulus, and was their top scorer in the 2011/12 season, while it was at Romulus where he first started attracting attention from professional clubs further up the league.

Then playing as a winger, the likes of Crewe Alexandra and Watford were linked with interest in Johnson.

He even had two trials at Burnley before joining Kidderminster Harriers on an 18-month contract in 2012 for a four-figure deal.

He spent three years at the Harriers, including a loan spell at Hednesford Town where he scored 17 times, as well as providing 13 assists in 114 appearances in all competitions for the Reds. It was then when Johnson got his first big move.

On February 3 2015, he was one of four players to arrive at Motherwell, with the Scottish Premiership side paying £40,000 for the 24-year-old.

“He’s very quick and can be a match winner,” the then Well boss Ian Baraclough said at the time.

“He can be effective on both flanks or even through the middle, so the versatility will be a real bonus for us.”

“Like the others we’ve signed, he has a point to prove and we hope to take advantage of someone with fire in his belly.”

And as he had done at every stage of his career previously, Johnson proved he could do it at a higher level.

In his 64 appearances with Motherwell, he scored 11 times and got 17 assists.

His good form lead to boss Mark McGhee claiming last summer he was worth more than £1million and could play in the second tier of English football.

“We had an approach from Oxford and we respect their approach, but I’d be amazed if Oxford have the amount of money it would require to get Marvin out of here,” he said. 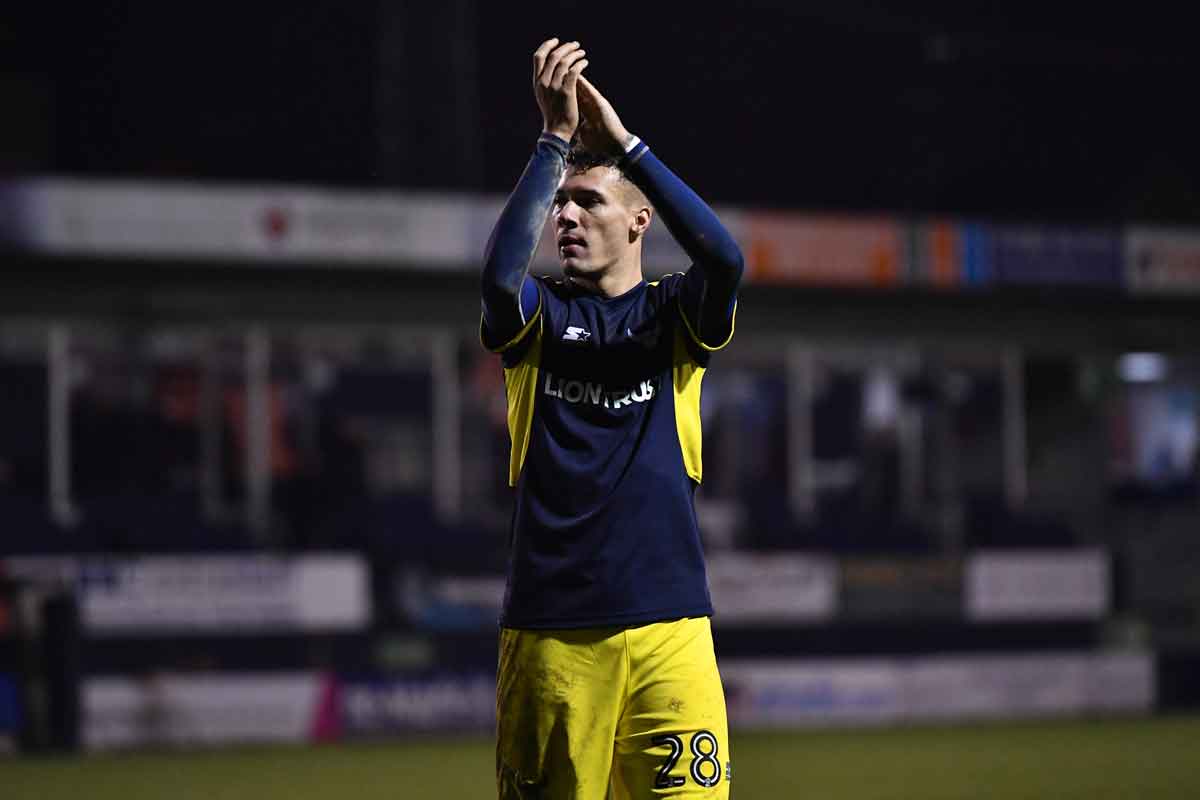 “That is not an observation about the club, but more about the league they are playing in.

“I was at Brighton against Lazio and I could have dropped Marvin into that game, and for me he would probably have been the best player on the pitch.

“Marvin can play in the Championship without any doubt in my mind.

But Oxford did make a bid big enough for Motherwell to accept and last summer he joined for an undisclosed club-record fee.

Conversion to a defender

After arriving at the Kassam Stadium on transfer deadline day in August, Johnson mainly played as a winger – playing on both the left and the right.

But injuries to Joe Skarz meant the U’s have tried him out as a left-back, and it’s there where he’s really caught the eye.

The 26-year-old is the first to admit it didn’t come to him naturally though.

He told the Oxford Mail: “I can’t really defend to be  honest, I’ve never had that mentality.

“There might be a few times when I’m out of position, but in my mind I don’t know that.

“The gaffer’s spoken to me about approaching the game from a deeper angle and getting more space.

“We’ve created a few chances from it.

“That’s what the majority of managers like now, because they want the overloads in the final third and not many wide men want to be tracking full-backs all day long.”

And since Johnson played there in November, it’s where he’s tended to play – and impress – for Oxford.

You can see how it plays to his strengths going forward. 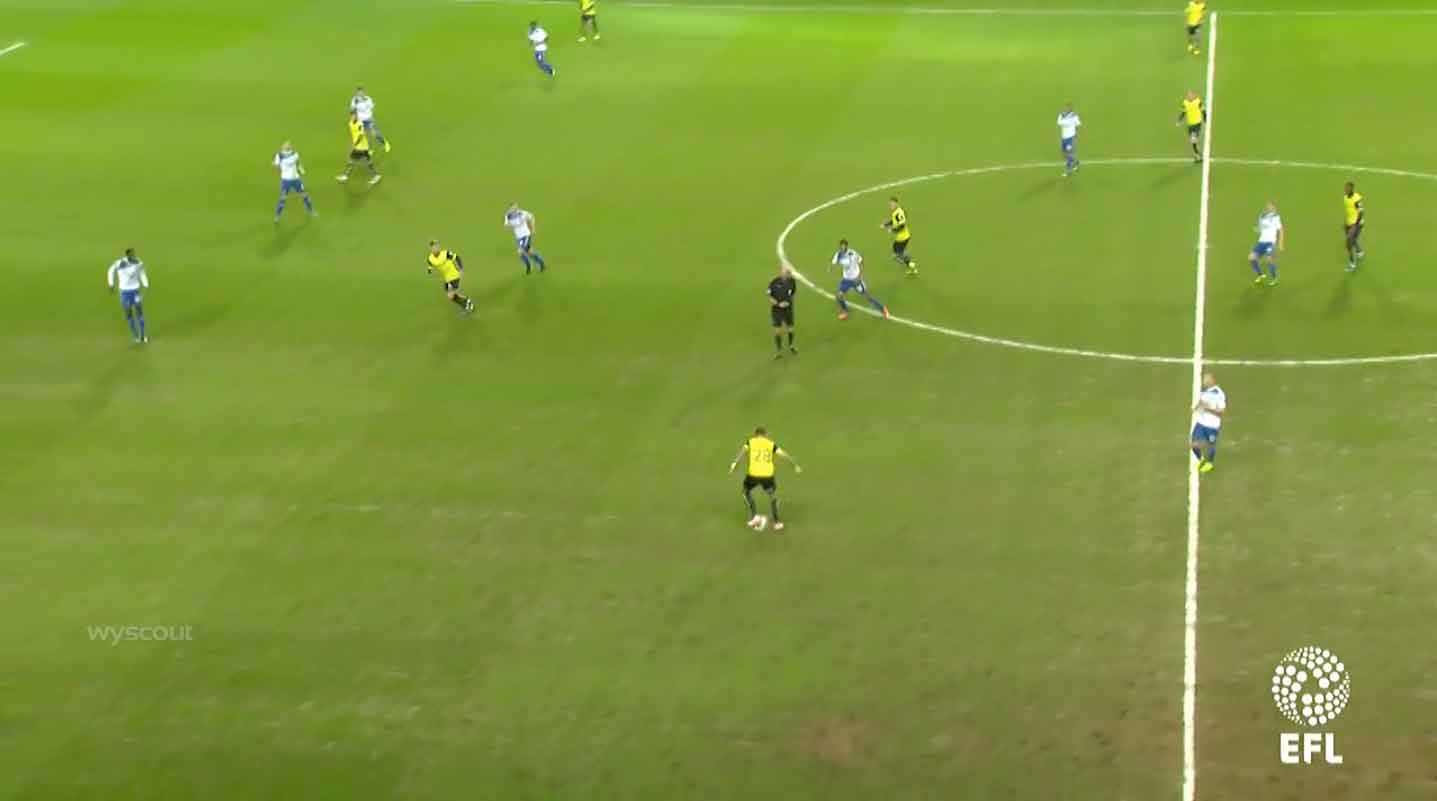 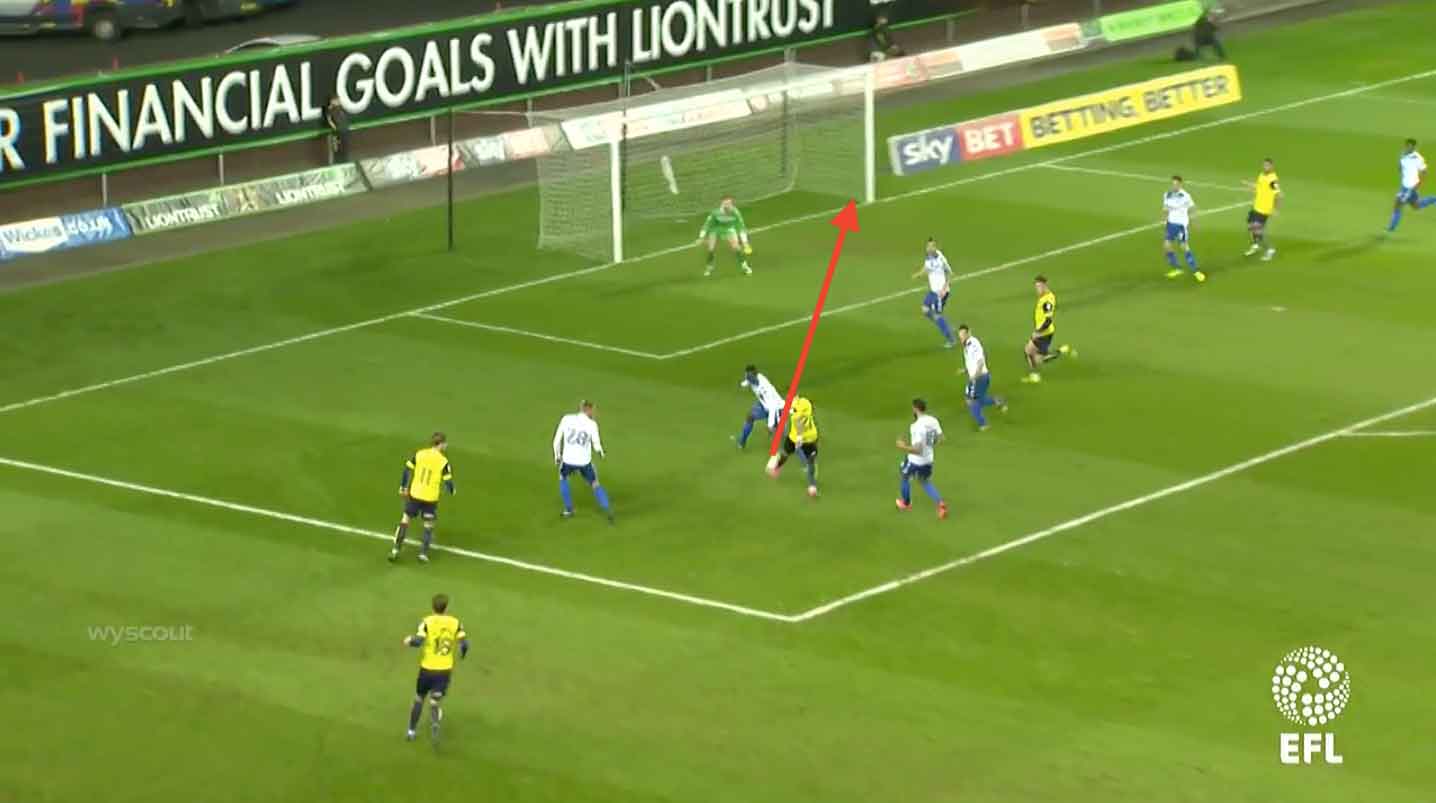 Against Bury, pushing forward from defence, the 26-year-old picked up the ball before running straight at the back line and firing a low shot home.

His pace and directness caused problems, and while the defending wasn’t great, it was down to Johnson to make the most of it.

And despite the 26-year-old’s concerns, he is showing signs of doing the defensive part of his job well. 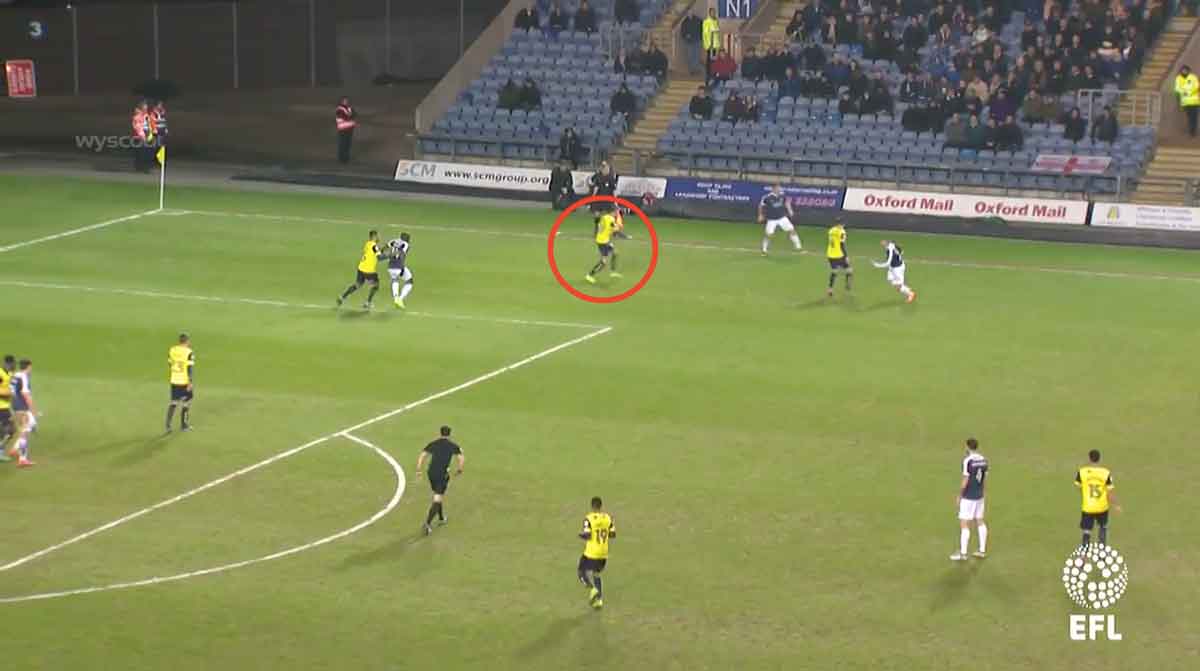 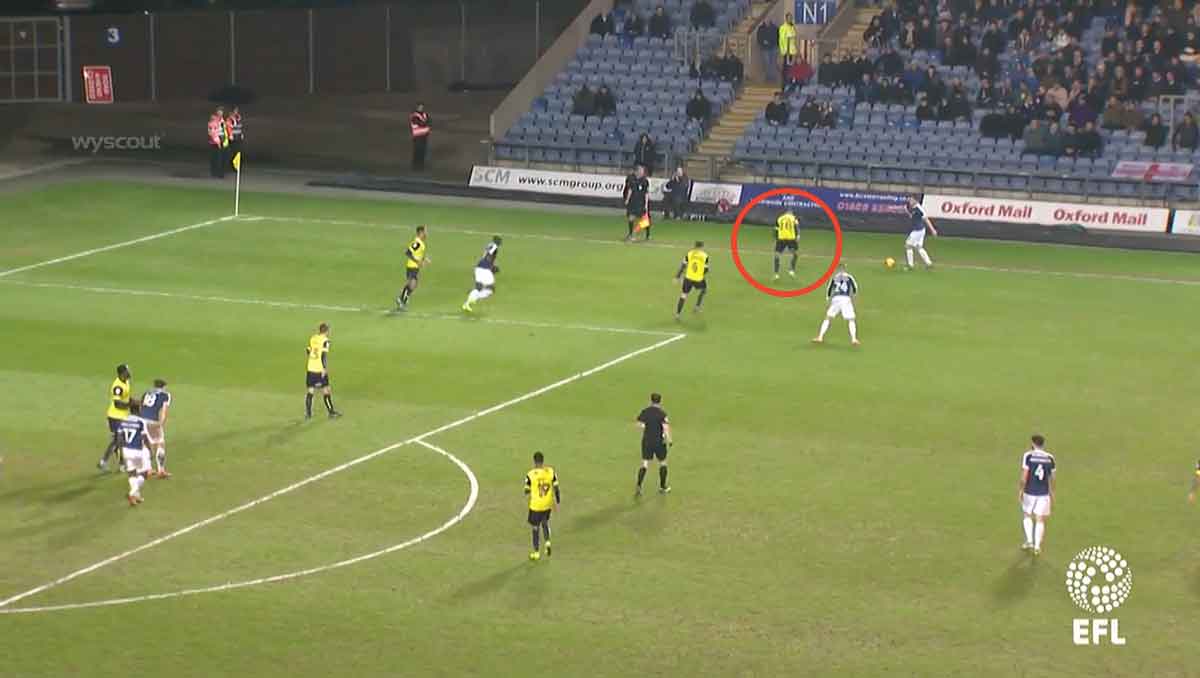 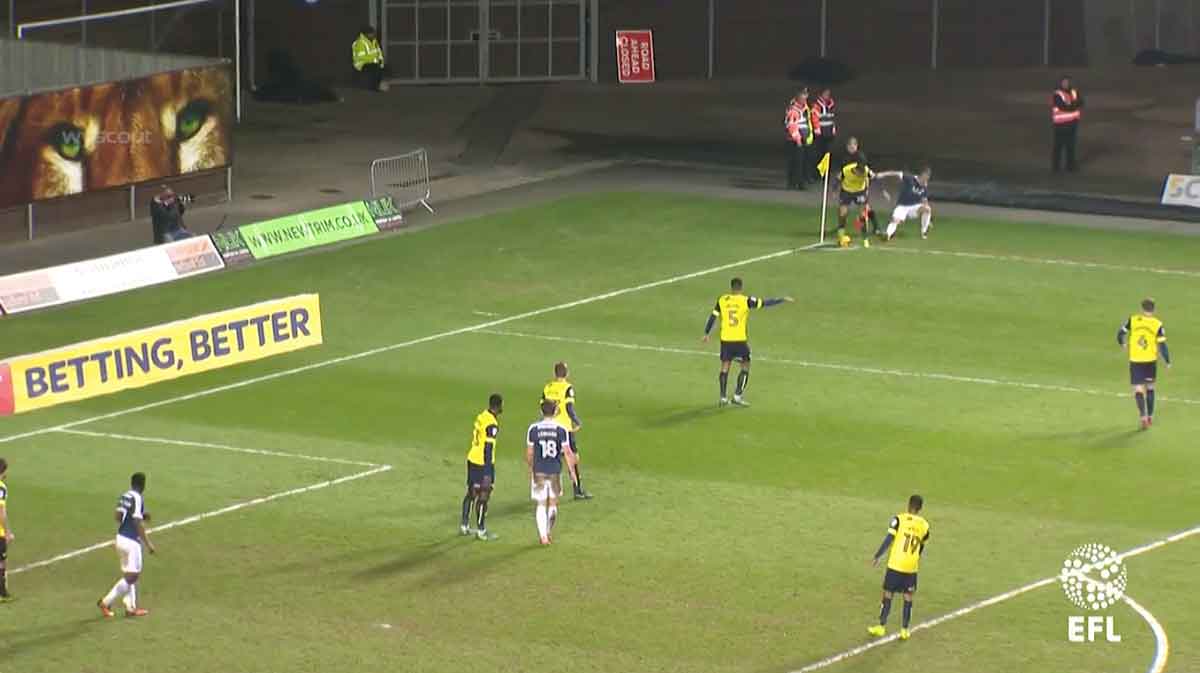 Against Southend United above, you can see how he stands off his man, uses his pace to not let him past and shows him to the corner flag, before being strong enough to get the ball and move up the pitch without committing a foul. 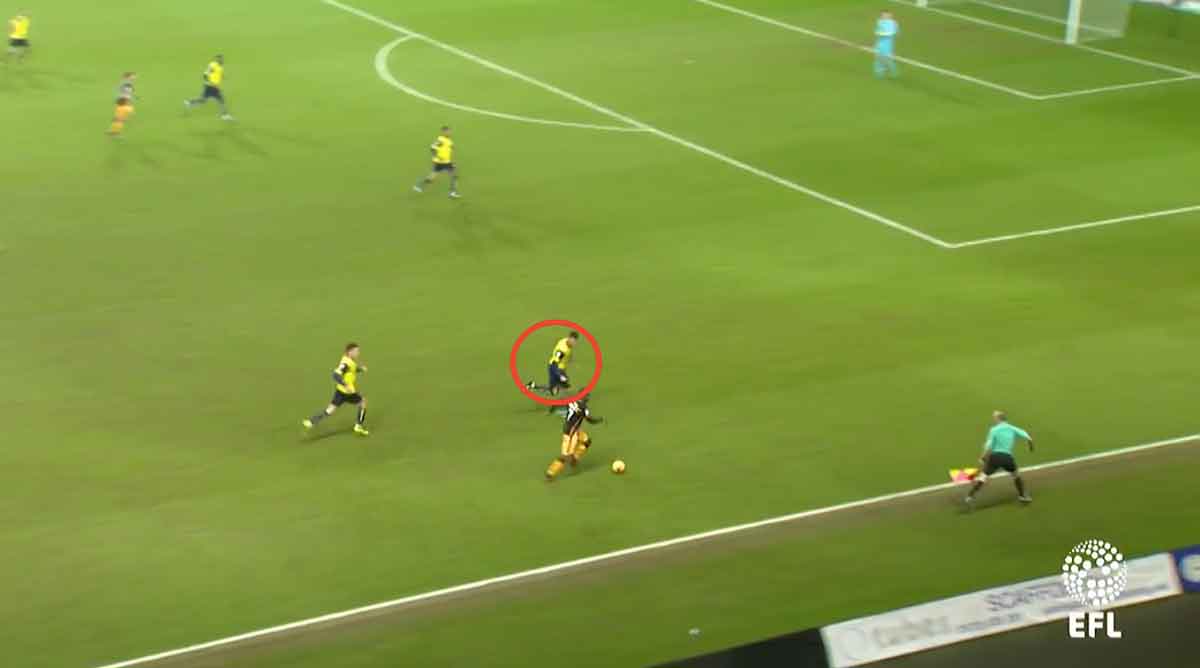 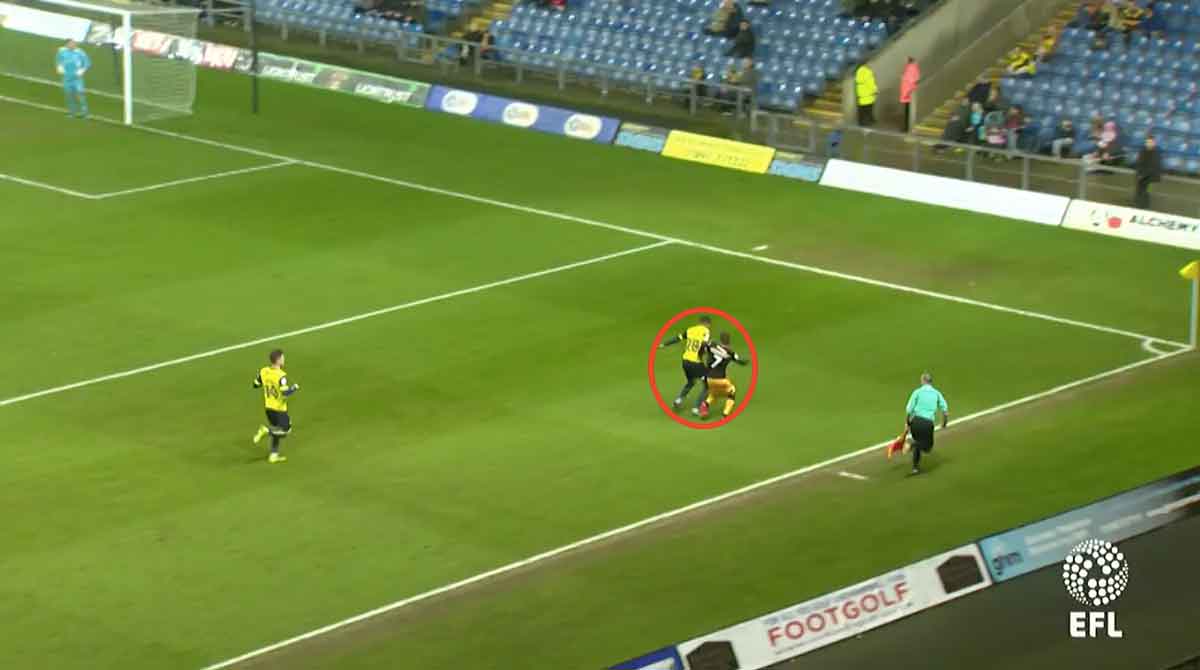 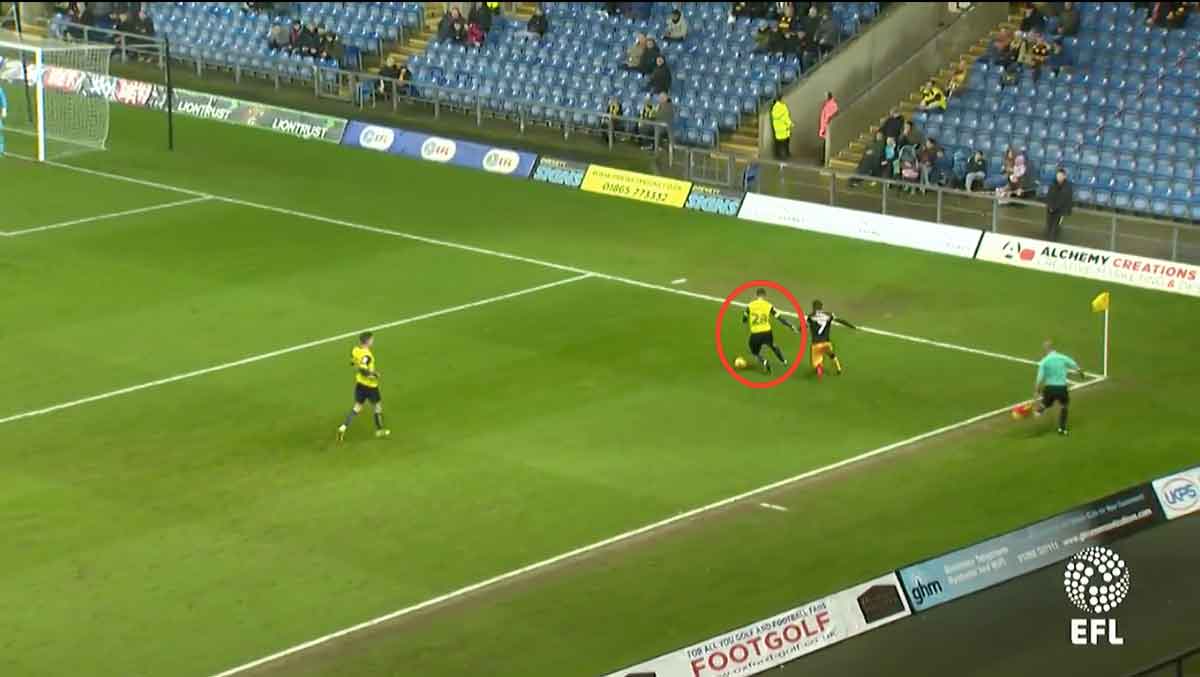 These qualities are also on show in the pictures above against Bradford City.

Johnson tracks the runner well, before using his pace and strength to win the ball for his side – that’s pretty much what you want from your full-back. 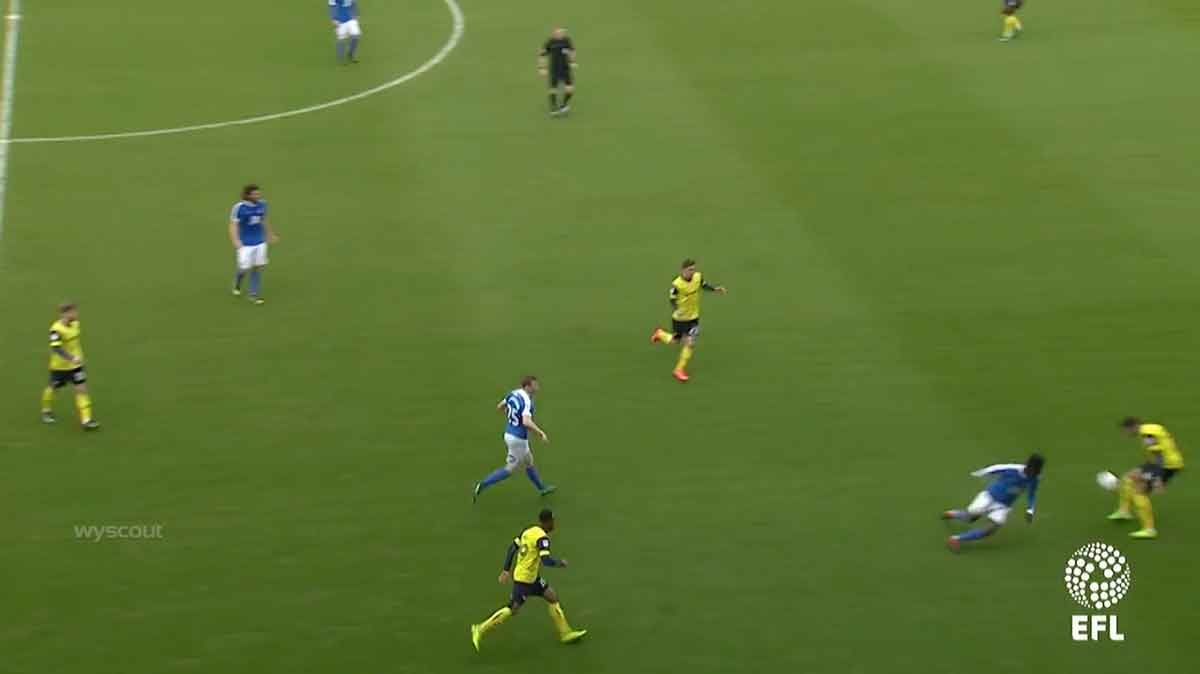 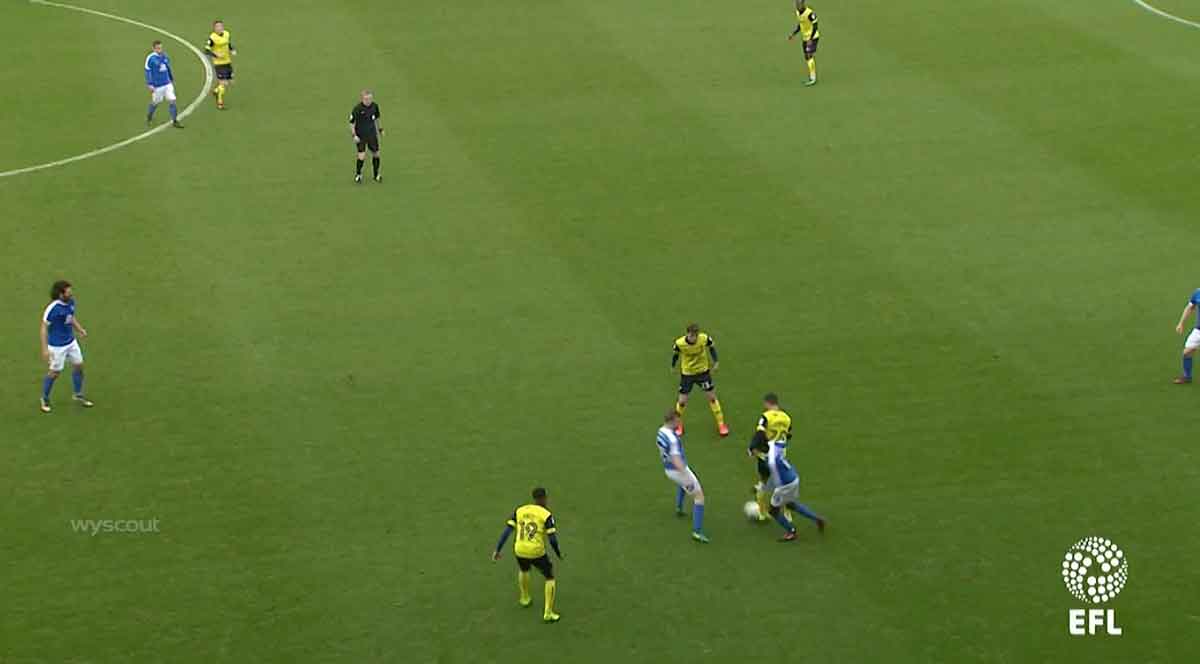 But he isn’t all about pace, he’s got a good touch too.

Against Peterborough United above, he flicks the ball in the air, but always has control of it in a dangerous situation, before playing a neat pass out of trouble to his team-mate nearby and taking two opposition players out of the game. 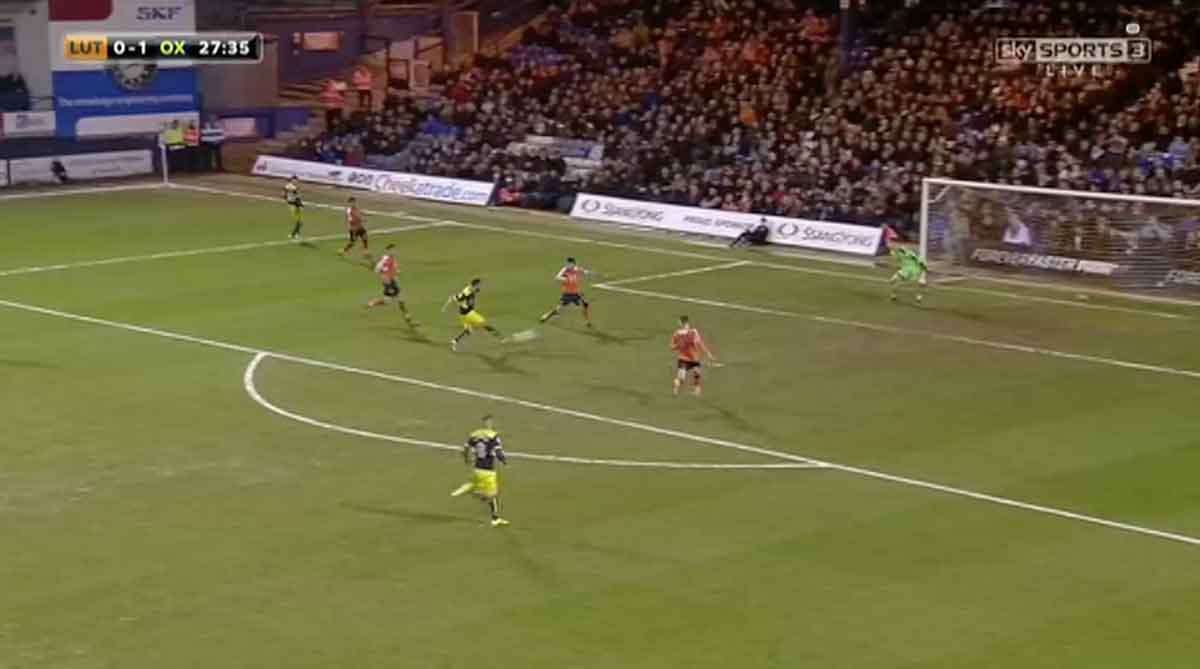 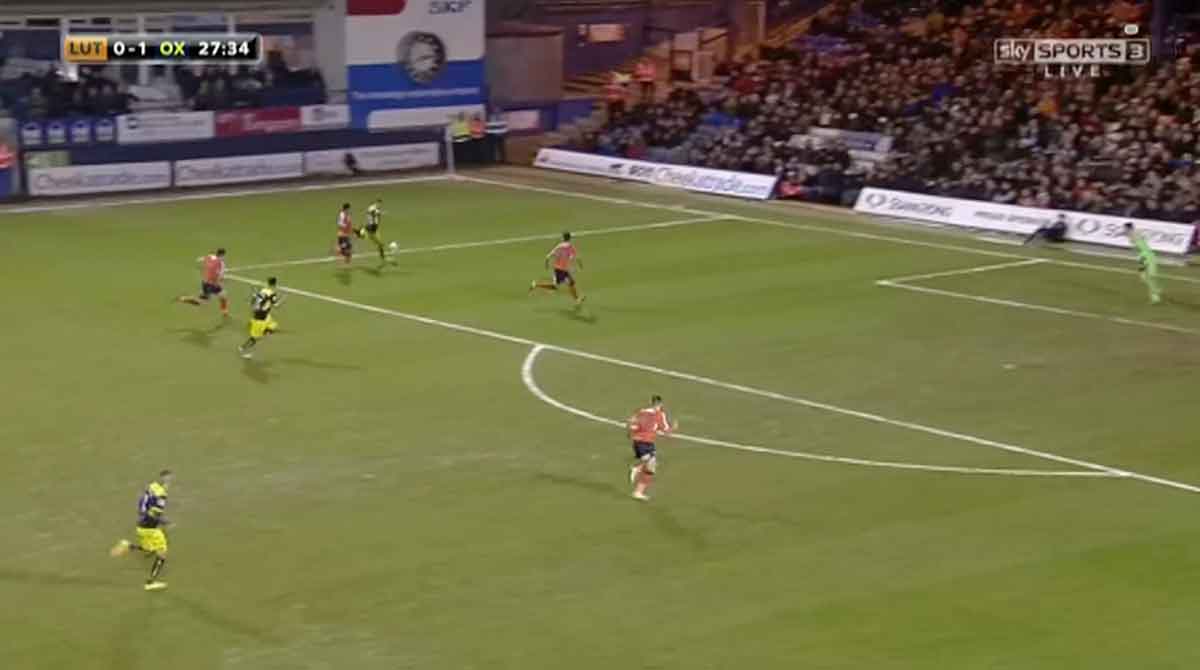 You don’t get many better strikes than the one in the semi-final of the Checkatrade Trophy to send Oxford to Wembley. His left foot can be truly sublime.

With Christian Fuchs and Ben Chilwell at the King Power Stadium, you would be surprised to see the Foxes move for another left-back.

But with Jeffrey Schlupp now departed, having a player who could play at full-back and as a winger may be useful in the squad.

The Oxford man would come cheap by Premier League standards, and even as a back-up, it’s probably pretty risk-free.

How much more can he develop at 26? Who knows? Vardy was 27 when he made his Premier League debut and look what that led to.

Crunching the numbers: Who will win the League One play-offs?