The Foxes squad from that magical Premier League triumph will never be forgotten, but there is little room for sentiment in football, especially at the top level. And, almost three years on from the most unexpected of title wins, the time has come for a clear out, a fresh start.

This summer four mainstays of that 2015/16 side come to the end of their contracts. Wes Morgan, Danny Simpson, Christian Fuchs and Shinji Okazaki can, as things stand, walk away from the club for nothing.

New Leicester boss Brendan Rodgers holds their fate in his hands. Something he doesn't take lightly.

“We'll assess over the next couple of months,” he said after the Foxes' 3-1 win over Fulham, a game in which a title hero, Jamie Vardy, scored twice. “There's no one more than me who will respect that, from looking from the outside at what they achieved.

“What they've given not just to this club, but to football. The story was absolutely amazing. I've found them really, really good guys. We have to protect their pride while also looking to improve in the summer.”

Clearly, from that last sentence, Rodgers plans to move on certain members of the quartet. But should any be kept on? We've had a look at their form this season and their underlying numbers to find out.

His influence and authority were vital to Leicester's success and he remains a big personality in the dressing room, which is why Rodgers is keen for the 35-year-old to be offered a new contract.

“I would like him to get a year,” Rodgers said. “He's ready if needed and, of course, he understands the position he is in – that he won't start every game. It happens to the best.

“As long as he can respect and understand where he is in the team and what the role is I would love to have him here.” 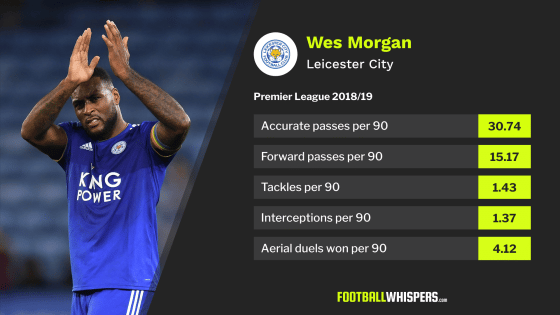 Rodgers – only in charge of Leicester for a fortnight – has been smart with his handling of Morgan. He's made it clear the defender will not be a first-team regular, his influence reduced. Either the centre-back accepts that or he moves on.

However, should Rodgers have been firmer? Should he have flexed his muscles and, politely, ushered Morgan out the door? There is certainly evidence to suggest so.

Morgan's powers have faded since the title win. He is now sluggish, cumbersome. This season he has won just 0.85 tackles per 90 and made only 1.37 interceptions per 90. For context, eighty-four other defenders better him in the former and sixty-two lead him in the latter.

His limitations with the ball would also be further highlighted in a Rodgers' side. Morgan's accurate passes per 90 of 30.74 – of which only 15.17 go forward – is the lowest figure of any Leicester centre-back to have played more than 1,000 minutes this term.

It's easy to forget the right-back wasn't in the starting XI at the start of Leicester's fairytale campaign – he didn't feature in the first-team squad at all in August and was a substitute throughout September.

But when Ritchie de Laet was dropped, Simpson made the full-back berth his own and played all but one of the following 31 matches. He was a regular the following season under Claudio Ranieri and then Craig Shakespeare, and also featured during 2017/18 under Claude Puel.

However, this term, following the signing of Ricardo Pereira, the 32-year-old has lost his place in the side. And with good reason. The Portuguese international has proven an excellent signing for the Foxes; a right-back who combines defensive solidity with attacking flair. 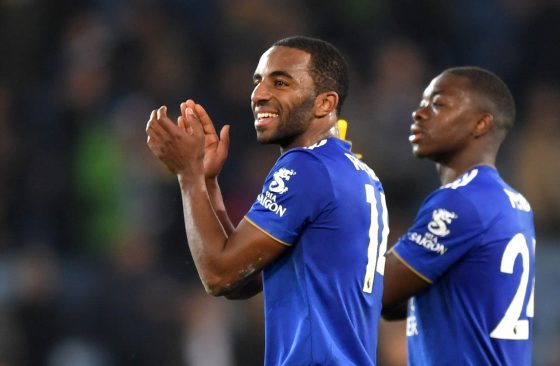 The 25-year-old is fourth among Premier League defenders for tackles won per 90 with 2.05 and is second for successful take-ons per 90 (1.68). He is also within the top 20 for big chances created per 90 and touches in the opposition box per 90.

With Daniel Amartey – who has been injured for much of this season but is closing in on a return – as a back-up option, it makes sense for the Foxes to part ways with Simpson.

Signed on a free transfer, the Austrian's first season at the King Power was the 2015/16 campaign. It took Fuchs two months to settle into the squad but was then first-choice left-back as they clinched the title.

He remained in the starting XI the following season but has been, rightly, phased out over the last 18 months, with Ben Chilwell now established as the club's left-back.

The 32-year-old has made only seven appearances in all competitions this term and will, of his own choice, depart in the summer and return to his family in New York City.

“I promised my wife I would be coming home,” he said last April. “I also want to see my children growing up, it's good we have FaceTime because letters wouldn't work.”

Had Fuchs been prepared to stay at Leicester, Rodgers may have considered keeping him for one more campaign.

Interest in Chilwell is mounting, with Manchester City constantly linked. If a big enough offer comes in for the 22-year-old, the Foxes may sell and then a replacement would be required. Fuchs could have helped bridge that gap but family, understandably, comes first.

The Japanese international's boundless energy is infectious and his work rate without the ball was vital during the Foxes' title win. He not only pressed and harassed opposition defenders and midfielders, but his selfless running created space for Vardy, who struck 24 goals in 2015/16.

Okazaki netted five times in the Premier League that season and has only added a further nine in the English top flight since.

He hasn't struck at all during the current campaign and has become nothing more than an impact substitute, a man introduced to in the dying minutes of games to either add impetus to the attack of simply be a nuisance when Leicester are defending a lead.

With Rodgers preferring systems with only one striker, and Vardy and Kelechi Iheanacho ahead of him, it's time Okazaki leaves Leicester. Hopefully, though, with a trademark smile.