For the second summer in a row Arsène Wenger has come sniffing around Leicester City with Riyad Mahrez reportedly an Arsenal transfer target.

A year ago it was Jamie Vardy, hero of the Foxes' incredible Premier League title win, who was wanted at the Emirates Stadium. But the England international elected to remain with the club he'd helped co-author the best story in English football history.

Now it's the turn of Mahrez. The 26-year-old statedBarcelona transfer target too.

Now Wenger has seen that as an opportunity to land the 26-year-old attacker.

“Have we made a bid for him? No. Not yet. Not yet means it could happen, it could not happen,” Wenger told beIN Sports.

“I think he had a huge impact at Leicester when they won the championship, like everybody else. It's been a different season this year but it doesn't take anything away from his qualities.”

That is a fair assessment of Mahrez's campaign. There is no denying the attacker – like most players at the King Power Stadium – failed to replicate his stunning form of 2015/16. 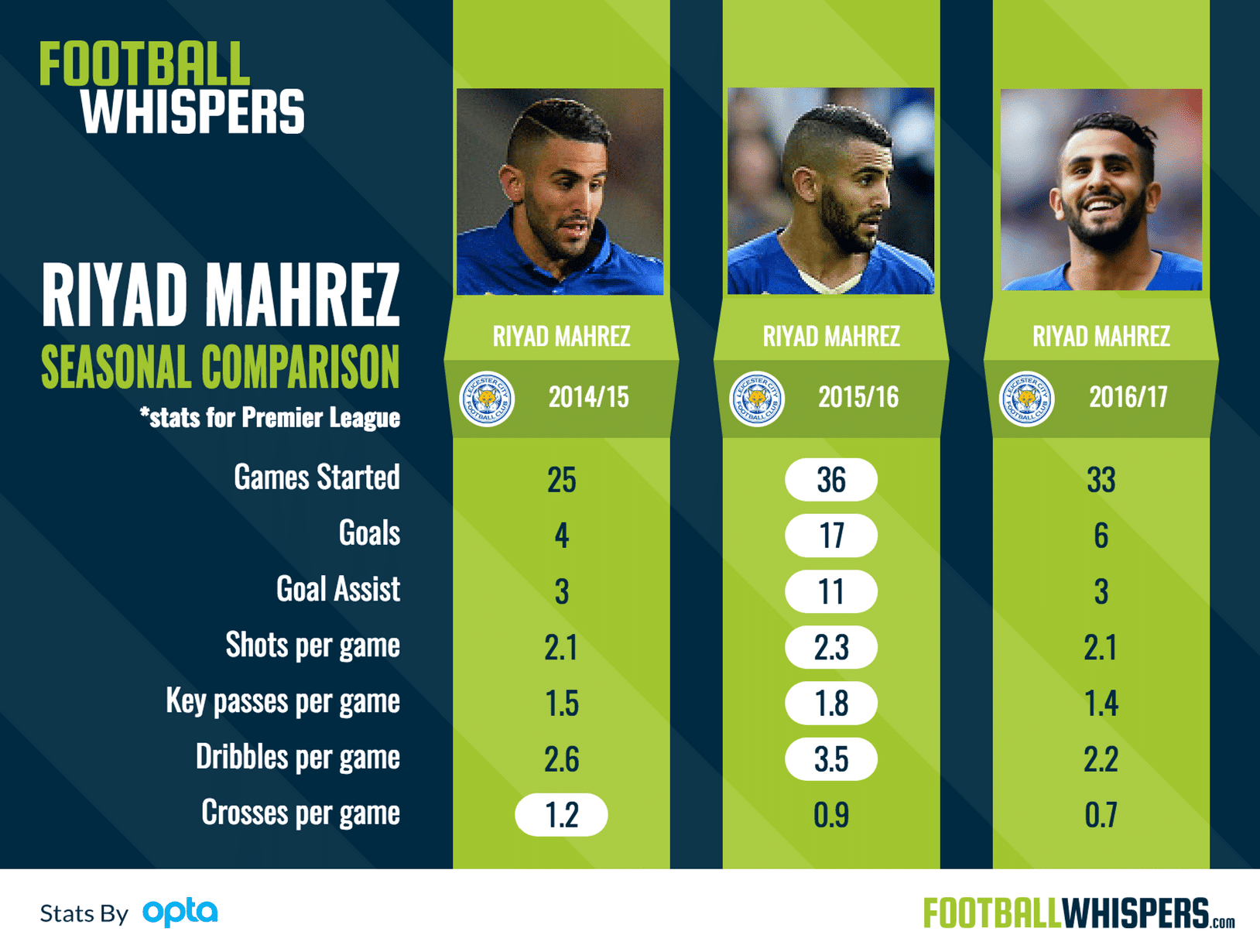 But what will be of greater concern for Leicester is that, statistically, Mahrez's 2016/17 campaign was less profitable than his first season in the top flight (2014/15) when the Foxes avoided immediate relegation with a stunning run of form.

Mahrez's displays last season won him the PFA Player of the Year award and rightly so. He was the man who found a chink in numerous defences to grind out victory after victory as Leicester marched towards the Premier League title.

But his numbers are well down. He scored almost a third of the goals he previously managed and suffered a similar drop-off in assists. He is taking fewer shots, completing fewer key passes, dribbles and crosses per game.

Replicating – or even getting close to – his 2015/16 form was improbable. Like his team-mates, N'Golo Kanté the exception, Mahrez raised his game to a level he could never hope to repeat during a once-in-a-lifetime-campaign.

Yet football's inherent lack of due diligence when it comes to scouting means Mahrez is now an Arsenal transfer target despite the fact his career history suggests he is not the player Wenger was wooed by 12 months ago.

It is not the first time the Gunners have been linked with a player off the back of one exceptional season and the north Londoners are not the only big club guilty of falling into that trip.

Liverpool, in particular, have been prolific in years gone by, signing Andy Carroll, Charlie Adam, Ricky Lambert and Danny Ings after a season in the Premier League.

Manchester City, too, have been hoodwinked in the past with Roque Santa Cruz, Benjani and Scott Sinclair all flopping after getting their big move to the Etihad Stadium.

But that is not Leicester's problem. Mahrez has made it clear he wants to leave the club and there appears to be a willing buyer. He is not at the peak of his value but it is clear the Foxes have squeezed most of the juice from him.

It is a situation not dissimilar to Dimitri Payet at West Ham United. The French international, off the back of a mesmerising debut campaign, did not want to be part of a relegation scrap and downed tools ahead of the January transfer window, forcing a return to Marseille.

The outrageously talented, enigmatic playmaker was no longer an asset to the Hammers who took the calculated decision to sell a player who had been the backbone of the side the a few months prior.

And that is exactly what Leicester City should do this summer – if and when a realistic bid arrives.

The first half of last season showed how poor Mahrez can be when he does not fancy it. He did not score from open play in the Premier League until March, netting the second in a 3-1 win over Hull City.

Once Claudio Ranieri was sacked the 26-year-old's form matched the team's and he improved drastically, scoring in vital victories over Hull, West Ham and Watford to steer his side to safety.

A sulking Mahrez is no use to the Foxes. Now is their best chance to pocket a big fee before he gets into the final two years of his contract.

If foxes are characterised by their craftiness then Leicester would do well to usher Mahrez out the foxhole this season.