The Championship Team of the Season was something of a shambles.

Announced on March 26, with nearly two months of the campaign remaining, they had Sheffield United striker Billy Sharp playing left wing, the 33-year-old shoehorned into a role out wide because leaving out the wonderfully named Teemu Pukki, whose 27 goals have brought Norwich City to the precipice of promotion, wasn't an option.

Leeds United‘s Pablo Hernández, who's been outstanding this year, was also conspicuously omitted while Aston Villa duo Jack Grealish and John McGinn were overlooked too.

Although voted for by club managers, the team sparked serious backlash on Twitter.

Leeds fans were apoplectic about Hernández's exclusion, their anger not helped by the fact that Jarrod Bowen, a right winger, could be seen on the left of the midfield three.

And while it was easy to query where Bowen was positioned, the 22-year-old's inclusion, in general, has been assured for quite some time.

For the young Englishman has been one of the division's standout performers this term, his goals keeping Nigel Adkins' side in the play-off hunt.

And while the Tigers look as though they will fall short in their top-six quest, the likelihood of Bowen playing his football in the Premier League from August is as strong as ever.

According to recent reports, Brendan Rodgers is keen to add the attacker to his Leicester City ranks. The Foxes boss is said to be a long-term admirer of the forward and, should Hull fail to clinch a play-off spot, the lure of top-flight action would surely prove too strong for an ambitious rising star.

The former Liverpool manager supposedly wants to partner Jamie Vardy, whose enjoyed a resurgence under the Northern Irishman, with Bowen in attack.

Although Bowen has predominantly played on the wing, Adkins has, at times, thrust him into a more central role, usually as the second striker. Indeed, he starred in September's 1-1 draw with Middlesbrough playing behind Chris Martin.

One of the Championship's top dribblers, Bowen is fast, strong and knows where the goal is. He struck 15 times in all competitions last term and has netted on 21 occasions this season, averaging better than a goal every two games.

While his story isn't quite as dramatic as Vardy's, the Tigers fan favourite, too, had to overcome a tough initiation into football.

Back when he was a wide-eyed pre-teen, Bowen was told by Aston Villa he had no future in the game. Having also failed to impress during a trial with Cardiff City, his hometown club Hereford United offered the then 17-year-old a lifeline.

Rising through the ranks of The Bulls, in 2014, he scored a crucial goal in a win over Alfreton United to help keep Hereford in the Conference Premier.

However, Hereford's relief was soon shattered by their expulsion from the division for failing to pay their bills. The club had no future but Bowen certainly did, and he was snapped up by Hull.

He couldn't quite break into the first-team during the Tigers' return to the Premier League, starting once and managing 181 minutes, but 2017/18 saw him blossom into a key figure at the KCOM Stadium, his performances earning him both the Supporters' and Players' Player of the Year.

This year, Bowen has been ever-present, starting all but one of Hull's 42 games, featuring in a whopping 3584 minutes of action.

Seemingly immune to pain, he has made good use of his time on the pitch. He ranks highly in some of the more obvious categories for wide players, like big chances created and crosses completed, but he excels in several other areas.

In fact, Bowen tops the Championship rankings for tackles, both attempted and completed, as well as possession won in the middle and defensive third by attackers. He's also first in interceptions attempted.

A diligent, hard-working presence on the right, his goals may help initially attract the scouts but it's his all-round game that keeps them coming back. 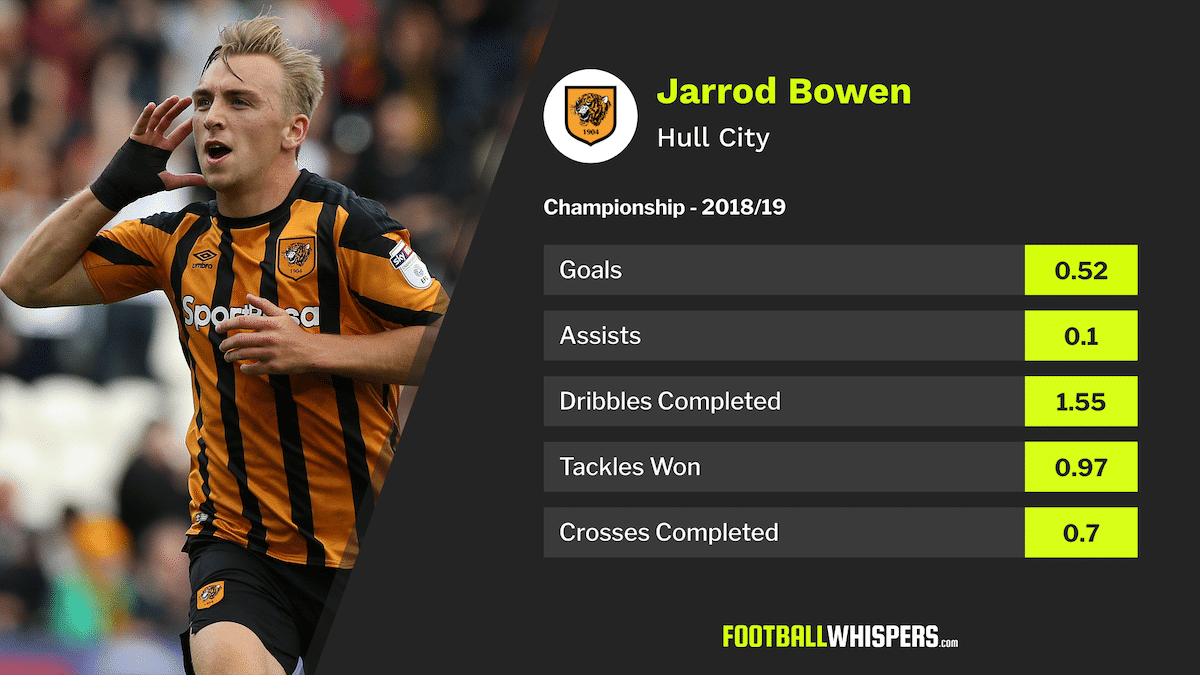 Leicester would be, you feel, an environment in which he could take his game to the next level.

As well as a manager determined to rebuild his reputation in England, the Foxes have former Championship starlets in James Maddison and Demarai Gray among an eclectic squad that boasts one of the Premier League's deadliest finishers (Vardy), a left-back of mouthwatering promise (Ben Chilwell) and a gifted Belgian midfielder (Youri Tielemans, provided he joins the Foxes permanently from Monaco this summer).

If Hull fail to finish in the top six, Bowen is almost certain to leave. And the 2016 Premier League champions could offer the ideal platform for him to shine in the Premier League.