Jamie Vardy is perhaps the most clinical forward in the Premier League this season.

The former England international turns 33 in January but looks sharper than he has in years with the former Fleetwood Town man enjoying life under Brendan Rodgers. But despite his exploits in front of goal, Leicester are going to have to start to think of a succession plan

Kelechi Iheanacho was supposed to be the heir to Vardy’s crown at the King Power Stadium. The Foxes parted with £25million to sign the forward in the summer of 2017. He’d shown glimpses of talent while with Manchester City but eventually lost his place in the team to Gabriel Jesus.

At the time, the fee seemed excessive but if he went on to fulfil his potential it would’ve been a bargain. Unfortunately for Leicester, however, the Nigerian has been anything but a success since his move. Across two seasons, Iheanacho has just four goals in the English top-flight.

According to reports, the Foxes, who currently sit third in the Premier League, are looking to reinforce their forward line during the January window and have their sights on one striker in particular.

Emmanuel Dennis tops the club’s wishlist if reports are to be believed. He stunned the Santiago Bernabéu last month when he scored two goals as Club Brugge secured a famous 2-2 draw with Real Madrid.

The 21-year-old isn’t a like for like replacement for Vardy. The two do share similarities in the sense they can both run the channels, both harass defenders, both are nuisances in general, and both have explosive speed.

But whereas Vardy is calm, cool and collected in the penalty area, Dennis is not. He has a knack for scoring some of the visually most horrendous goals you’ll witness at top level.

A night that Emmanuel Bonaventure Dennis will NEVER forget ??

A brilliant result for the Belgian side ? pic.twitter.com/Qq82xZi3CE

Take his two goals against Real Madrid for example. The first is a poor touch that ends up bobbling past the confused Thibaut Courtois. The second sees him stumble as he races into the penalty area before somehow lofting an effort over the former Chelsea man.

Dennis scored in Brugge’s 4-0 win over Gent last month, too. And, again, it wasn’t the slickest of goals. He pressed a centre-back into making a mistake, pounced on the loose ball and looked to get into the area. He slipped as he moved the ball onto his right foot but recovered to lash it home.

The deft lob over Courtois and the strike against Gent show he’s a creative finisher. There’s something there for Rodgers and the coaching team at Leicester to work with. But he’s also going to be a source of frustration due to how many opportunities he wastes because of those rogue touches and lapses in concentration.

If he’s truly going to be the one to eventually replace Vardy as Leicester’s No.9 he’s going to need to sharpen up in and around the area.

At the King Power, Dennis won’t be getting 3.44 shots per 90 and he won’t be attempting ten dribbles per game. He’s going to have to adapt to fit in. 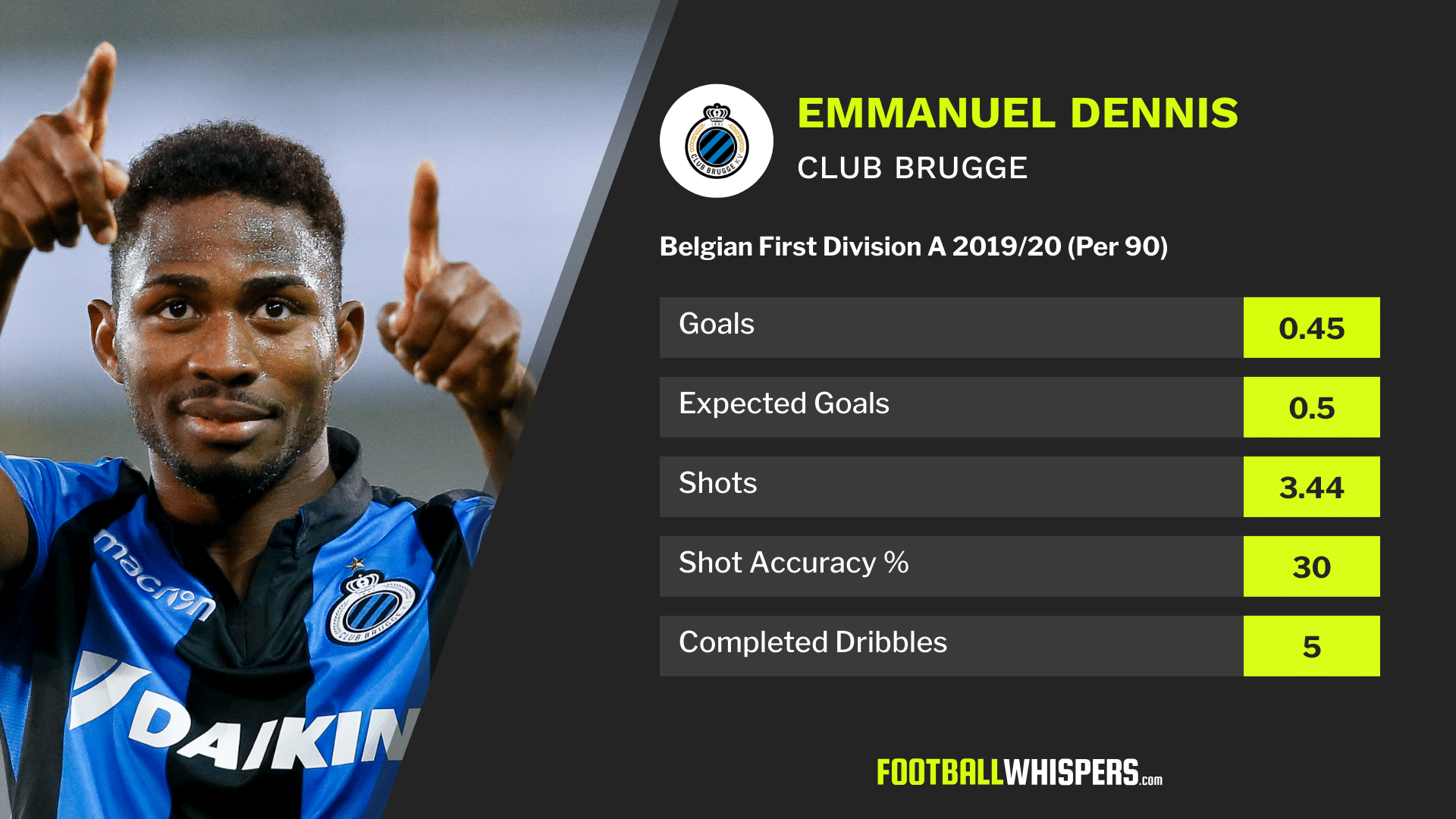 The potential is there, however. And at €20million it's a risk worth taking for a team unable to compete with the riches of the top six but still wanting to challenge for the Champions League. He’s the sort of signing that could turn into something special in the right system under the right coach.

Rodgers is a good man-manager and strikers tend to thrive under him. He helped develop Daniel Sturridge and Moussa Dembélé and it was under Rodgers that Luis Suárez really caught fire in England. Vardy has also been back to his best since the appointment of the former Celtic boss.

Dennis could prove to be yet another Leicester masterstroke in the transfer market and could well help cement their place in the top four of the Premier League for the foreseeable future if all goes to plan.