Leicester City’s fairytale 2015/16 season captured the imagination of the world. A team tipped for relegation not just challenging the established top 4 in what many claim to be the toughest football league of them all, but actually comfortably winning it. The Foxes finished ten points clear of nearest rivals Arsenal.

They followed up the unthinkable by doing the unimaginable. They managed to keep hold of star players Jamie Vardy and Riyad Mahrez. This despite strong interest from the likes of Chelsea and Arsenal. They also strengthened with an eye for planning for life in the Champions League. Islam Slimani, Ahmed Musa, Ron-Robert Zieler and Nampalys Mendy joined Ranieri’s revolution. The first victim of their success was N’Golo Kante as the Frenchman made a big money move to Chelsea.

The second victim of their success last season was Leicester as a football team itself as highlighted by their form so far this season.

In the opening 10 matches of the current campaign Leicester have conceded almost half as many goals(16) as they did in the entirety of their league winning season(36). Manchester United, Liverpool and Chelsea put 11 goals past them in just the three games and Ranieri's men have managed just the three clean sheets. This may, on the surface at least, seem like the biggest problem for Leicester but they weren’t always the impenetrable force Ranieri turned them into. Last season in their first ten league games Leicester conceded 17 goals and kept just the one clean sheet.

However, the real difference this season is the fact the goals just aren’t as frequent, just the 12 (half of what current league leaders City have managed) compared to last seasons total at this stage of 20. Record breaker Jamie Vardy has just the two Premier League goals to his name as do both Ahmed Musa and Islam Slimani with Riyad Mahrez and Shinji Okazaki netting one goal each.

While Leicester’s form in the Premier League has been underwhelming given the lofty heights of 2015/16 they have possibly exceeded their expectations in Europe. It’s a stark contrast between their Premier League form and their Champions League form. Light and Day.

In the clubs opening game in the Champions League, away to Club Brugge, they cruised to a 3-0 victory. A Marc Albrighton goal and a Riyad Mahrez double made it a memorable debut in Europe’s elite competition. Leicester welcomed Porto to the King Power Stadium for their first ever Champions League home match and Islam Slimani lived up to his Dragon Slayer nickname as he put Porto to the sword in a 1-0 win. Ranieri’s men were making this whole Champions League malarkey look easy. Leicester then faced Danish team FC Copenhagen at the King Power stadium and kept their perfect start going thanks to a Riyad Mahrez goal. The fourth matchday saw Leicester visit Denmark and although their perfect start came to an end they still remain unbeaten thanks to a late save from their very own Dane Kasper Schmeichel. They are the first debutants in the Champions League to keep four consecutive clean sheets. 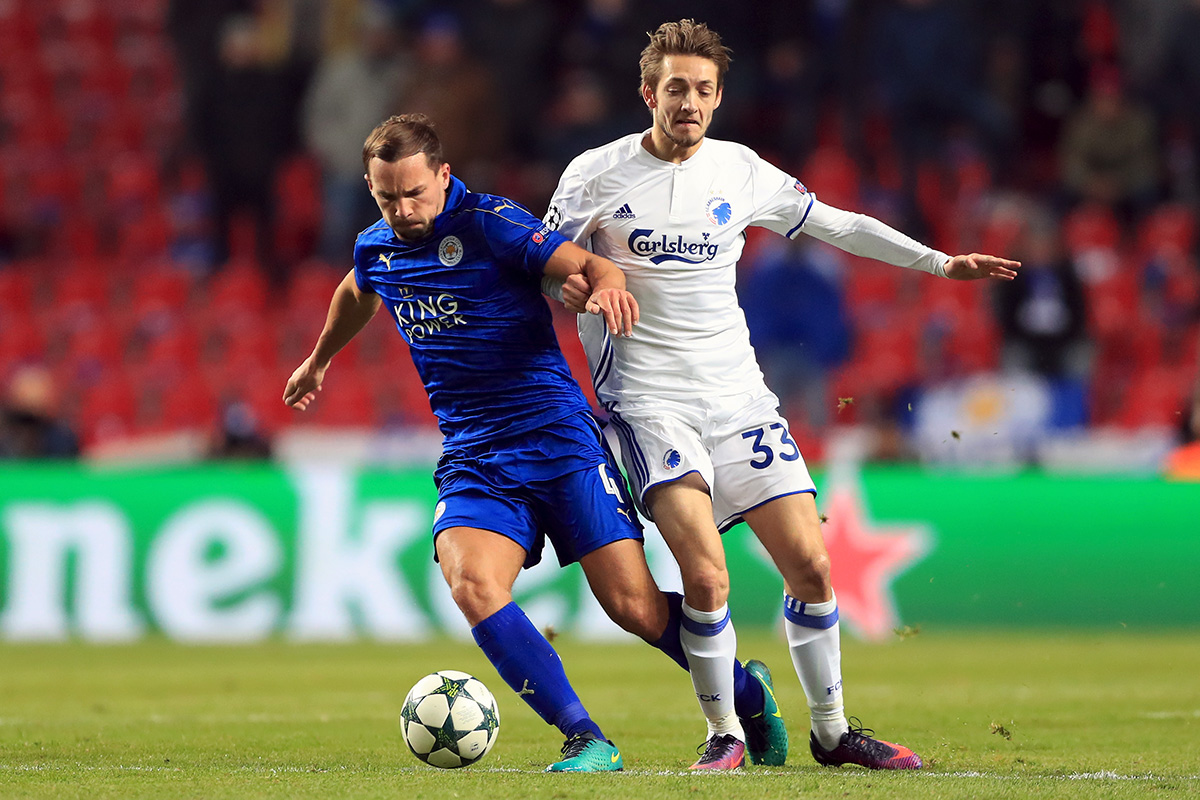 The elephant in the room appears to be Leicester’s group was one of the more favourable ones. Aside from Porto the other two teams in the group aren’t the toughest of opposition but it appears, like last season in the Premier League, teams are underestimating Leicester. They’re playing right into the hands of Ranieri and they’re doing so at their own peril.

A main contributor to Leicester’s success in the Premier League was how they dictated space. They sacrificed the possession, played a deep defensive line, looked to play on the counter attack but all the while they were in control of where the opposition could and could not play. It was a regular occurrence to see Leicester walk away with all three points even though they’d less than 40% possession. They didn’t need a lot of the ball to do the damage.

Leicester are allowing the opposition to have the ball. They are one step away from having “I dare you to break us down” embroidered on their shirts.

Teams in Europe often struggle against well organised, defensively solid opposition because, in a nutshell, they’re not used to coming up against teams like that. It’s completely different dominating possession with the other team trying to stop you than it is dominating possession because the opposition are allowing you to do so. Some of these teams in Europe have no challengers domestically so every single week they are hitting teams for three/four goals and it becomes second nature. When they are tasked with getting a little creative to break down a team they struggle and it’s why the likes of Atletico Madrid (before Cholo turned them into a machine) used to cause upsets, because his team dictates space.

Leicester are all but assured a place in the knockout round of the Champions League. If they continue playing in this style then there may be even more shocks along the way because Ranieri is perfect for European knockout football.