Legon Cities to win to nil

Legon Cities have a chance to push themselves onto the coattails of the top sides with a win here. Will they get it? Find out with our Legon Cities vs Bibiani Gold Stars match preview with free tips, predictions and odds mentioned along the way.

Hosts to win to nil

Can Legon close the gap on the boys at the top?

Legon Cities arrive in this game in a good vein of form and thinking that with momentum they can mix it up with those scrapping at the top. Hosting Bibiani might prove a good game for them too owing to how poor they've been away from home. How will both sides line up to grab a positive result?

Legon Cities have enjoyed a good run of form the past couple of months; they've lost just once in their last six games, with four wins and a draw. They also have no losses in their last two games; they'll look to extend that run to three games as Bibiani Gold Stars come visiting.

Bibiani Gold Stars have had a fairly decent run recently; they have four wins and two losses in their last six games. That said, they have struggled away from home this season, having lost all of their last six road games; they'll hope to halt that streak as they take a trip to the Accra Sports Stadium.

A quickfire FAQ on Legon Cities vs Bibiani Gold Stars 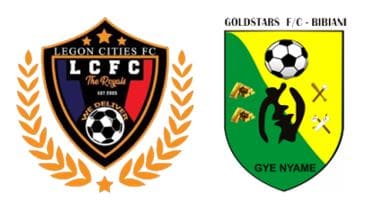