With Chelsea hopeful of overturning their registration ban in time for the January transfer window, thoughts have inevitably turned to where Frank Lampard can strengthen his squad.

It's not a particularly easy question to answer. Several of the Blues academy graduates have stepped up this term and, in the process, plugged the gaps which needed filling.

Yet there is one problem position for Lampard. And in truth, it's been an area of weakness for the past 18 months: left-back.

Emerson Palmieri has established himself as first-choice in the role this term but the Italian international has his limitations. He isn't hugely effective in the final third and can be exposed defensively by the Premier League's best wingers.

That latter problem is shared by Marcos Alonso. The Spaniard proved himself an excellent wing-back under Antonio Conte but has never convinced on the left of a back four. He lacks the required discipline and concentration and struggles against pace.

César Azpilicueta can deputise at left-back and has been shifted into the role during matches, but his tendency to cut inside onto his stronger right foot can halt promising attacks. It isn't a long-term solution.

So if the Blues are able to make additions in January, left-back should be their primary position to strengthen. They've been linked with several in recent months but we've used Twenty3‘s exclusive football lab to identify five players Chelsea should target.

Let's start with the obvious…

Leicester City have been in excellent form this season and after 13 Premier League games they sit second. Jamie Vardy has claimed plenty of plaudits, as has midfielder James Maddison. But Chillwell's impact can't be understated.

The left-back has thrived under Brendan Rodgers. Given licence to get forward and create, the 22-year-old is averaging 22.18 passes per 90 in the final third and is fashioning 0.45 Big Chances per 90. Both of which put him among the top 25 for defenders in the English top flight. 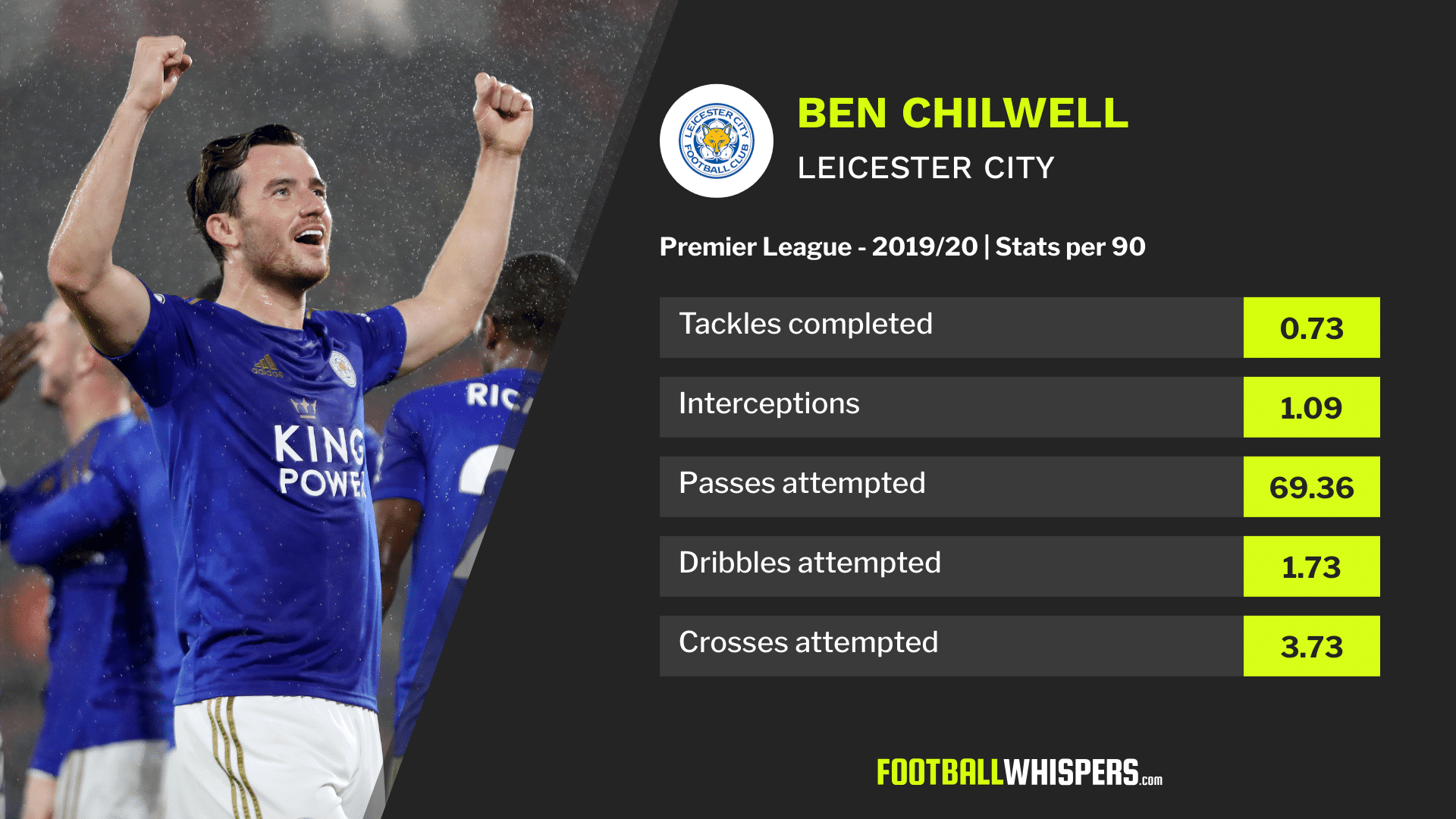 Defensively the England international is reliable, too. He is winning just shy of 60 percent of the tackles he attempts and is successful in 2.09 aerial duels per 90. He is rarely exposed at the back post, something which isn't the case for Alonso and Emerson.

The big problem Chelsea face is that Leicester will not sell Chilwell on the cheap. He signed a new contract in October and is valued at £60million by the Foxes. That may prove too much for the Blues, which is why they should consider other options.

The oldest player on this list at 27 years old, the Argentina international would be expected to make the left-back spot his own if he were to arrive at Stamford Bridge.

Since he joined Ajax in the summer of 2017, Tagliafico has established himself as one of Europe's most consistent left-backs. He can have an influence in the attacking third yet is defensively solid.

This season he is second among left-backs in the Eredivisie for attempted tackles per 90 (2.69) – perhaps not something expected given Ajax often dominate their matches – while his open-play expected goals assisted of 0.27 can't be matched by his peers in the Dutch top flight. 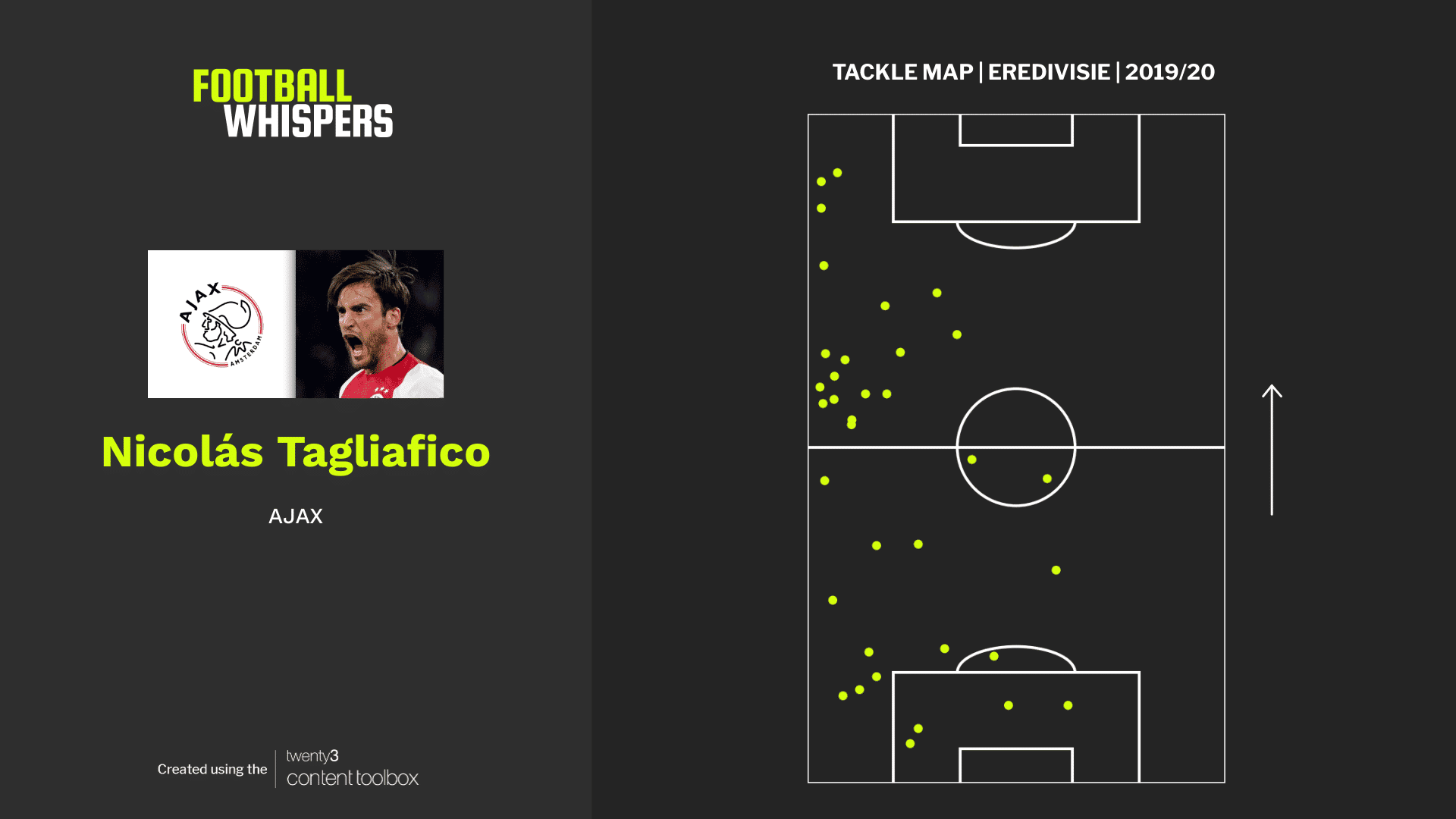 Previously linked with a move to Arsenal, Tagliafico opted to sign a new deal with Ajax in May. However, he hinted it would be his last season in Amsterdam which could make a January exit tricky.

“I want to tell you that I will stay for one more season,” the defender said. “Hopefully it will be a great year like this year.”

The Brazilian has been on Chelsea's radar for some time – reports stretch back as far as 2017 – yet he remains at Porto, in itself somewhat curious.

Over the last four seasons, the 26-year-old has established himself as one of Europe's most exciting full-backs. He is a constant threat in the final third and is assured defensively. So why hasn't he left the Estádio do Dragão?

There has been plenty of interest. Atlético Madrid were expected to trigger his £35million release clause in the summer but never stumped up the cash. Real Madrid and Juventus have also scouted the Brazil international. 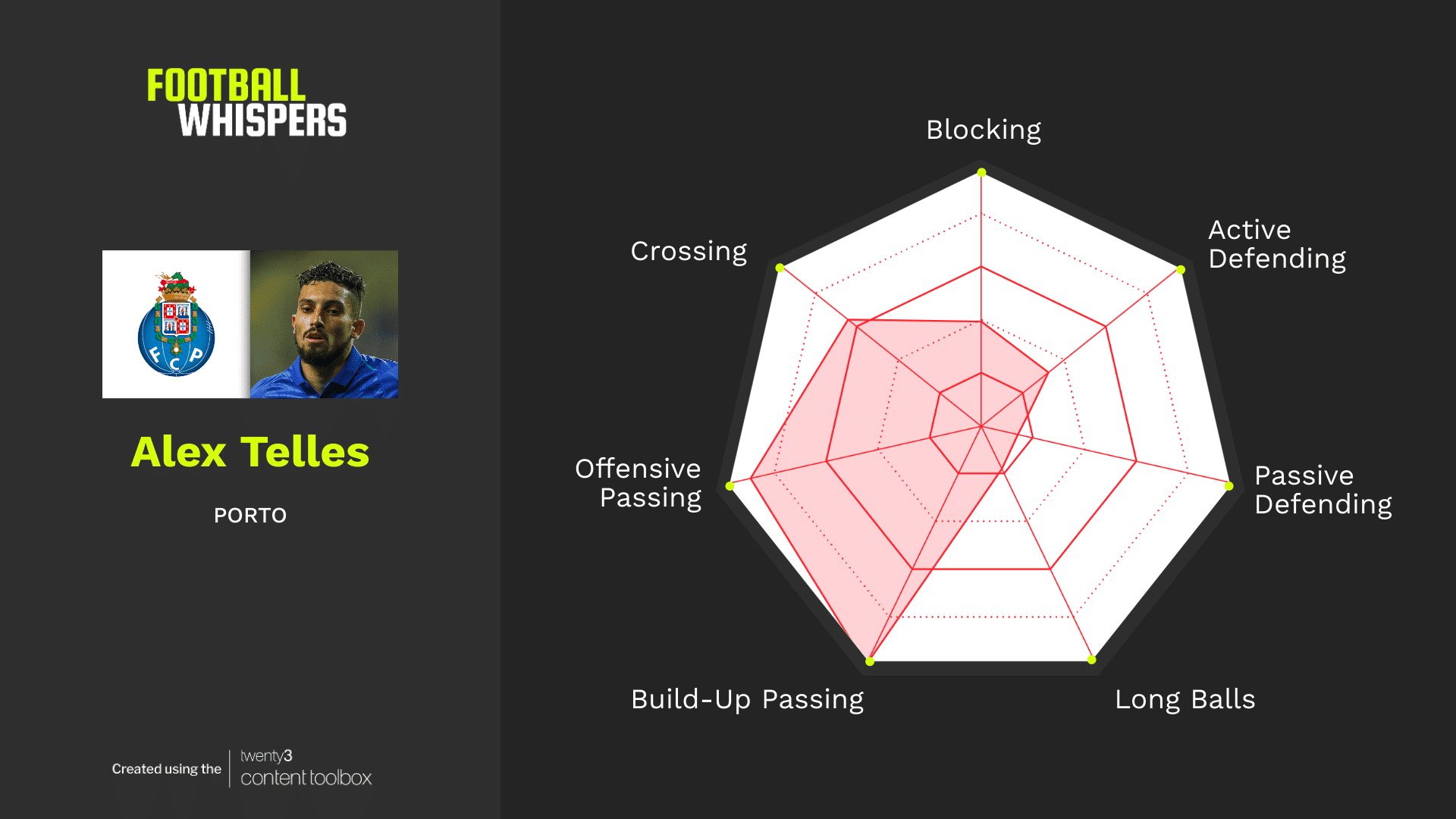 But Porto stood firm. Either a club paid Telles' buyout clause or he remained in Portugal. That stance may change in January, however.

The left-back's current deal expires in the summer of 2021. If he isn't sold this winter, he will be in the summer. Porto can't afford to lose a player of his quality for nothing so Chelsea could re-enter the market an opportune moment.

There are no signs Telles' powers are on the wane. He is top among left-backs in Europe's top five leagues for crosses completed per 90 (3.16) and second Big Chances created per 90 (0.66).

Defensively he isn't tested consistently – Porto often control their matches – but what is encouraging is he is winning 87 percent of the tackles he attempts on a per 90 basis.

The 19-year-old AZ full-back is the wildcard selection on this list. Yet that doesn't mean he shouldn't be considered by the Blues.

Previously courted by Ajax in his homeland, Wijndal has produced a number of eye-catching attacking displays this term for the club he first joined at the age of ten.

He has featured in every one of AZ's 14 Eredivisie games and has claimed four assists. Yet what is more impressive, is that isn't the result of exception finishing from his team-mates. 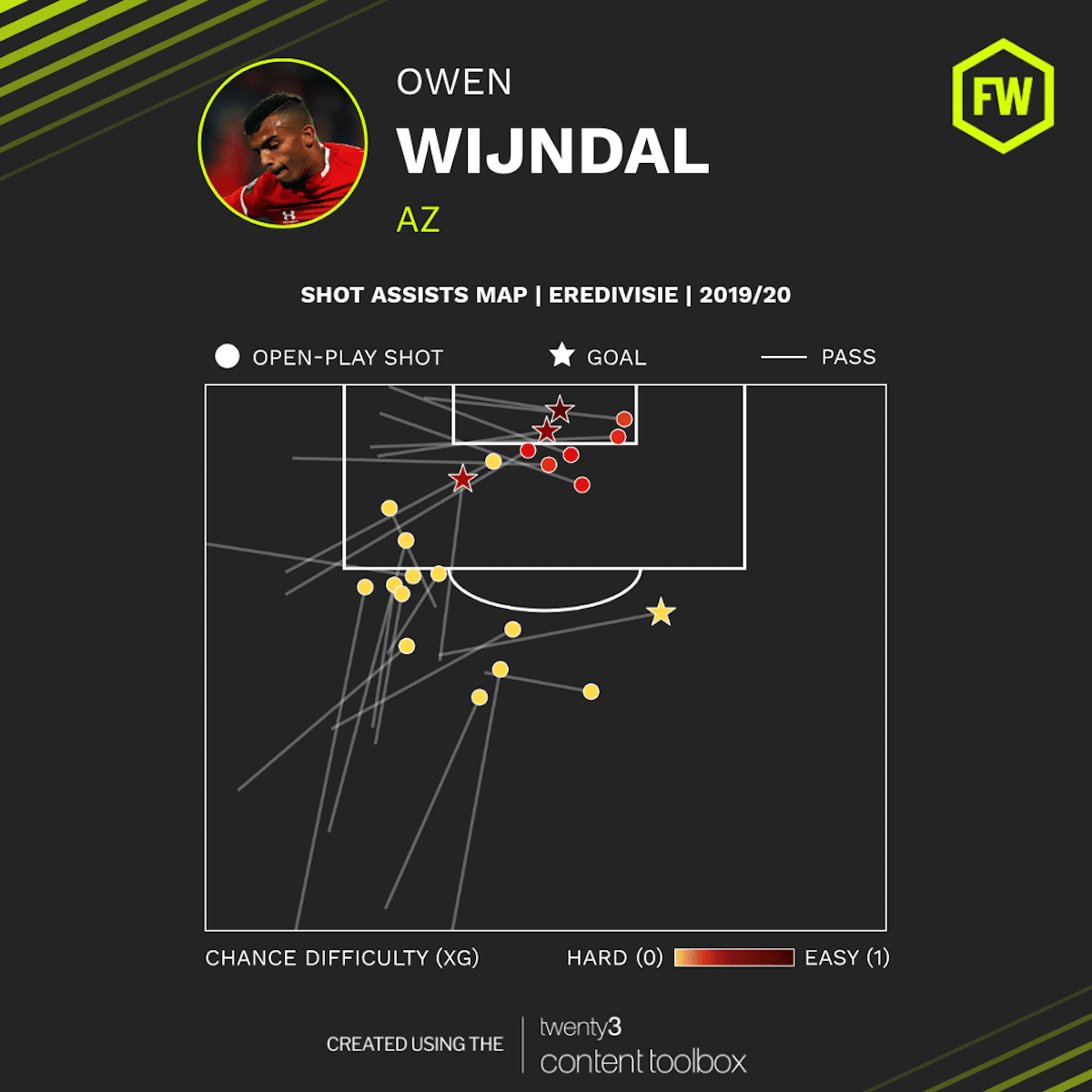 Wijndal's open-play expected goals assisted for the campaign stands at 3.50. It is a figure no left-back in Europe's top five leagues can rival.

Defensively he is raw, no great surprise, and it would be unlikely Wijndal could arrive at Stamford Bridge and establish himself immediately as the club's first-choice left-back.

However, it's clear he has an abundance of potential and, in a side built to attack such as Lampard's, the youngster could thrive at Stamford Bridge if given time.

The 18-year-old is a special talent and, unsurprisingly, he has already attracted the attention of Europe's biggest sides. Paris Saint-Germain have been linked with a move for the Angers youngster, as have Alético Madrid.

It is only a matter of time until he leaves the Ligue 1 side. They simply don't have the financial clout to keep the teenager. But they will demand a club-record fee, which would be around £30million.

That is steep for a player with just 15 first-team appearances to his name, but Aït-Nouri would almost certainly prove worth it in the long run.

Defensively he is mature beyond his years; it isn't easy to get beyond the France Under-21 international. He has regained possession 4.77 times per 90 in his defensive third this season, a figure bettered by only seven Ligue 1 defenders. 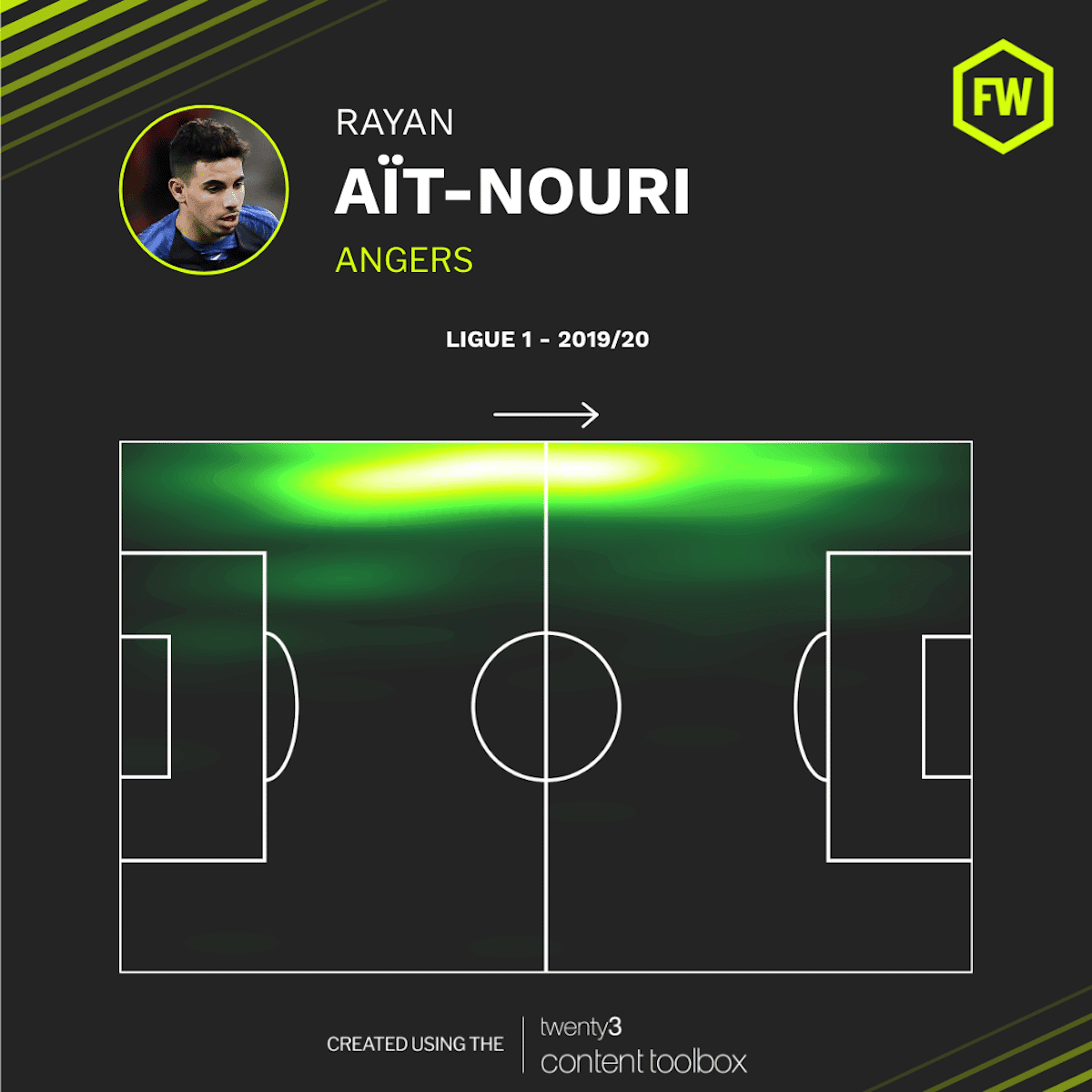 He is also winning 1.50 tackles per 90 from just 1.96 attempted which again highlights his rare ability to efficiently and regularly reclaim the ball.

Yet full-backs at top clubs need to be more than defenders. They have to be able to influence the game in the attacking third. Aït-Nouri can do that and should only improve with experience.

He has averaged 0.19 assists per 90 this season and is completing 1.50 of his dribbles. No Ligue 1 full-back under the age of 21 can match those numbers.

Aït-Nouri would be a smart long-term investment by Chelsea – as would Wijndal. The only concern would be whether the club wants to commit to a young left-back given much is expected of 17-year-old Ian Maatsen, who has already made his first-team debut.