Leeds haven't made the best of starts to the new Premier League campaign as they are yet to secure their first win with five games already played. On Saturday, David Moyes takes his West Ham side to Elland Road looking to make it three wins on the spin against Leeds after getting the domestic double over Bielsa's men last season.

Here are our predictions for Leeds vs West Ham

West Ham beat Leeds home and away last season, so you can start to see just why we're backing the visitors to win this weekend. West ham sit 5pts and nine places above Leeds in the Premier League table and have already picked up 4pts from their two away games. Leeds lost their last home game 3-0 against Liverpool and are yet to win at Elland in the league this season.

We're predicting a low-scoring 90-minutes between these two clubs as their last encounter ended in a 2-0 victory for West Ham. Under 2.5 goals have also been scored in three of Leeds' last four outings and Saturday's hosts have failed to score in two of those fixtures. West Ham have kept clean sheets in their last two away games in all competitions and we can see Moyes' men stopping Leeds from scoring this weekend.

Michail Antonio returns from his suspensions this weekend and the Jamaican international will be keen to add to the four Premier League goals he already has under his belt this season. Antonio is the key to the way West Ham play and we're confident he will find the back of the net against a Leeds defence that has been very generous so far this season.

Everything you need to know ahead of Leeds vs West Ham

Leeds couldn't hold onto their advantage away at Newcastle last time out and in the end, they had to settle for a draw. In midweek, Leeds were held to a goalless draw after 90-minutes by Championship side Fulham in the League Cup but managed to progress via a penalty shootout victory. Leeds are struggling in front of goal and haven't been doing enough to finish teams off this season, something that could be their downfall once again this weekend.

West Ham followed up their 2-0 win in the Europa League last week with a narrow 2-1 defeat at home to Man Utd in the Premier League. Mark Noble was subbed on in stoppage time to take a West ham penalty that would have secured the Hammers a 2-2 draw, only to miss the sport kick and be left red-faced. Moyes' men are going well once again this season but it will be interesting to see if their squad can cope with the riggers of competing in multiple competitions.

Leeds: Struijk, Bamford, Koch, Llorente, Harrison, Ayling and Belloli could all miss out this weekend through injury, though, Ayling and Bamford could pass late fitness tests.

West Ham: the visitors have no fresh injury concerns to deal with and, as mentioned above, they welcome back top scorer Antonio following suspension. 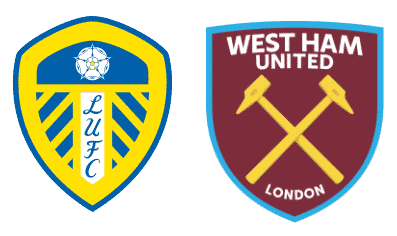