Leeds could close the gap on Leicester to just 1pt with a win in the pair's Premier League clash this Sunday. Neither side can claim to have been consistent so far this season but it's the Foxes that head into the game as the bookmaker's favourite to win.

Our Best Betting Tips for Leeds vs Leicester

Here are our predictions for Leeds vs Leicester.

Both teams have scored in four of the last six encounters between these two clubs and we're expecting more of the same this weekend. Three of Leeds' last five league games have ended with both teams getting on the scoreboard, while five of Leicester's last six matches in all competitions have ended the same way.

This is a fixture that has produced a lot of goals in recent years with each of the pair's last three meetings witnessing at least four goals. Over 2.5 goals have been scored in five of Leicester's last six outings in league and cup while Leeds' recent trip to Norwich also produced over 2.5 goals, so you can see why we're predicting goals in this game.

Raphinha to Score First or Last

Raphinha has been one of the bright sparks in an otherwise dull start to the new season for Leeds. The Brazilian has scored 4-goals in the league already and has netted the first goal for Leeds on three occasions already. Leicester don't keep many clean sheets and we're backing Leeds' biggest goal threat to score either the first or the last goal on Sunday.

Leeds vs Leicester – The latest stats and markets

Can Leeds secure back-to-back wins for the first time this season?

Leeds might have been expecting a much-easier 90-minutes than they were treated to a Carrow Road last time out. The first half ended goalless and although Leeds broke the deadlock through Raphinha in the 56th-minute, Norwich struck back almost instantly to make it 1-1. Leeds needed a reaction to silence the home fans and they got it on the hour mark when Rodrigo force the ball home for what turned out to be the winning goal. Leeds remain 17th in the table but a win this weekend could see them shoot up as high as 12th place.

Leicester always knew it was going to be a tough 90-minutes at home to an in-form Arsenal side, especially as the visitor's width was always going to be an issue to Leicester narrow and compact style. It was from these wide positions that Arsenal did indeed cause Leicester problems and control the game overall. Two first-half goals for the visitors took much of the steam out of the host's sails and in the end Arsenal deserved their 2-0 victory. Leicester are having issues balancing European, cup and league football and having a number of injuries hasn't helped but they remain a very dangerous team on their day and should be challenging fr the European places come the business end of the campaign.

Leeds: Robin Koch, Luke Ayling and Patrick Bamford are all expected to miss out on Sunday due to injury.

Leicester: Wesley Fofana, James Justin and Marc Albrighton have been ruled out of the trip to Yorkshire while Ricardo Pereira, Ayoze Perez, James Maddison and Harvey Barnes will all face late fitness tests. 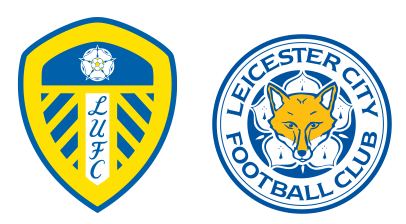