Now that the dust has settled around Elland Road, fans of Leeds United can take a step back and count stock.

With Chris Basham’s 71st minute goal all that separated them from Sheffield United in their last fixture before the international break, Leeds certainly came off the worst in what looks to have been the deciding fixture for the coveted automatic promotion spots in the Championship this season.

Had Tyler Roberts’ shot hit the back of the net rather than the post or Pontus Jansson not fluffed his lines from six yards out, it could have been a different story for the Yorkshire team. Rather than being five points clear at the top of the league, though, Marcelo Bielsa’s side find themselves a point behind the Blades with only eight games to play.

That solitary point might seem like an insurmountable hurdle at this stage. But even the most pessimistic of Leeds fan would be hard-pressed to deny that they are out of the running for automatic promotion.

In fact, on closer inspection, the similarities between both team’s run-ins is remarkably similar. They both have Millwall at home and Preston and Birmingham away. Beyond that, they both face Ipswich: Leeds away at Portman Road and Sheffield United at Bramall Lane.

But who is favourite for these runs of fixtures?

In the following table, the last eight games for each of the top three teams in the Championships have been split into home and away fixtures and ranked by difficulty.

Norwich City have been included because, being only four points clear of Sheffield United and five clear of Leeds, there is still the chance for them to fall back into the battle for automatic promotion, not least because they still have two tricky away fixtures against top six sides to come. 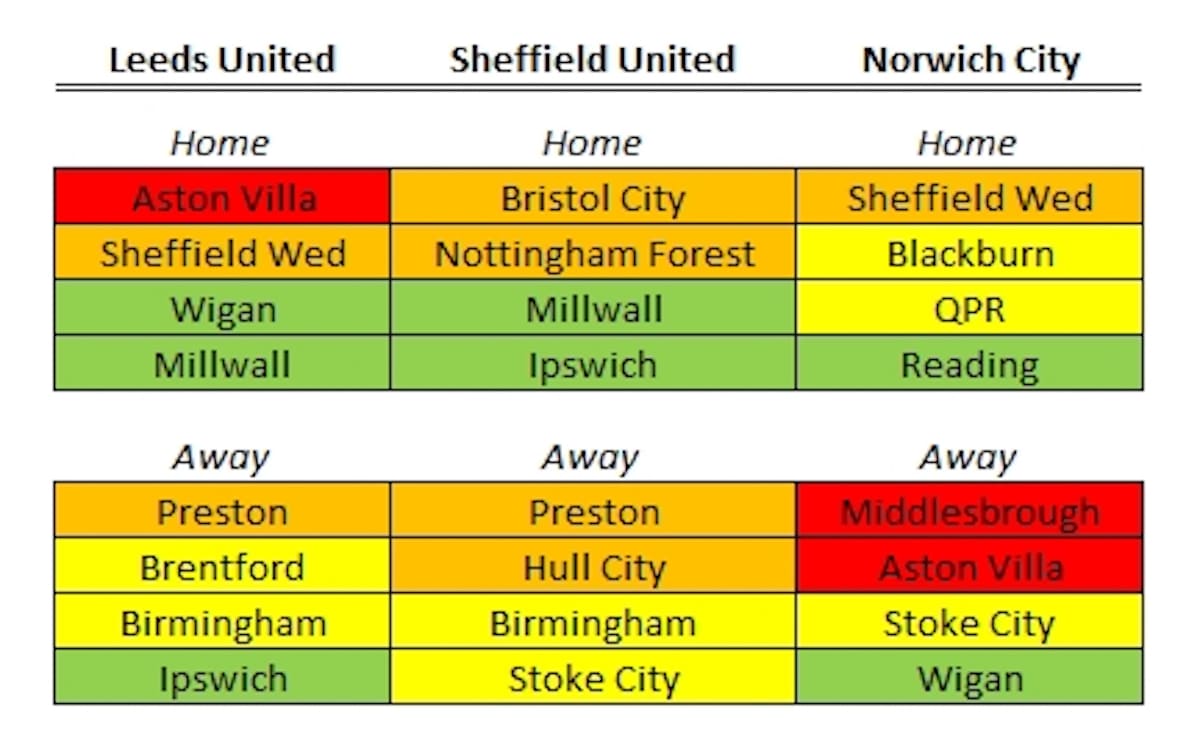 Within the graphic above, each team has been roughly ranked per their position in the table. However, this rough ranking doesn’t really help assess how difficult each respective run-in is so we have added another level.

Each colour represents a different grouping of teams within the Championship table. Red indicates teams in the top six. Orange denotes the chasing pack, in this case, seventh place to 11th place – each of those teams is within three points of the top six.

Those teams in yellow – 12th to 18th – are the sides who are likely out of the chase for a playoff place but safe enough from relegation. And then the green-coloured teams are the teams looking to avoid the drop.

At face value, it’s hard to call the easier conclusion to the season when it comes to Leeds and Sheffield United. Leeds have an unenviable home fixture against the form team, noting that this might not be a helpful heuristic, Aston Villa. But the Blades will hardly be relishing matches against Bristol City, Nottingham Forest and Hull.

Beyond this, both teams have two away fixtures against sides in the 12th to 18th category who will have ‘nothing to play for’ and Leeds have an extra fixture against a bottom six club. You could hardly slip a knife between these run-ins.

To help us better distinguish between these two, then, we could add yet another layer of evaluation. In the following two tables, we have broken down each team’s performance in the Championship this season against the four groups we distinguished above: 1st to 6th, 7th to 11th, 12th to 19th, and 20th to 24th.

Interestingly, this data shows that each team has struggled against a different sub-category in the league. For Norwich, the breakdown of points per game in each sub-category follows as you might expect: they have done best against the bottom six and worst against the top six.

Of course, you could offer explanations for this. Leeds, for example, have struggled to create against sides who defend in a low block, many of whom you would expect to be in the bottom half of the table. That would explain why they have picked up fewest points per game in that 12th to 18th bracket.

But how might all this help us assess the run-ins of these various teams? Well, although it is a little crude, you could multiple the average points per game for each sub-category by each fixture that each team has yet to play.

By the same method, Sheffield United pick up 15.13 points in their run-in, giving them a total of 89.13 points overall. Norwich, who have the worst run in by this metric, only manage 14.9 points over the course of their final game but their 4-point buffer keeps them on top with 92.9 points in total.

Of course, it should be noted that this method is rudimentary. When assessing a team’s run of fixtures, there are many more variables to take into account and the sample sizes here are small enough to raise questions. However, when comparing our results with a more sophisticated model, there is a remarkable similarity.

In fivethirtyeight’s model for the final table of the Championship, Norwich have 92 points – as we did – and Sheffield United at 89 points – as we did. Our model does give Leeds an extra two points but the correspondence between these two is still notable.

Statistical models operate on the principle of repeatability. The assumption is that, if this run of fixtures were repeated an infinite number of times, the final positions would tend towards these configurations.

In reality, then, there is everything to play for going into the final straight of this year’s edition of the Championship. One thing is certain: if one team slips up, there will be another ready to take its place.