Everything could change on Saturday, however, when Sheffield United make the short trip to Elland Road to face Leeds. It could be the defining match of the season as far as the top two is concerned.

But perhaps things wouldn’t be so close if a different course of events had unfolded in December.

There were rumblings earlier in the campaign. Samu Saiz, Leeds’ No.10 was an ever-present for the first fifteen games of the season. Suddenly, though, he was dropped to the bench with the fans left in the dark about what was going on.

Rumours of a falling out between the Spaniard and his manager Marcelo Bielsa were rife and some people were suggesting there might be underlying attitude problems.

Finally, on December 17, the club broke the news that Saiz was homesick and had given him permission to enter talks about a loan move to Getafe. He did not play for Leeds again after this point despite the fact there were two weeks until the loan window opened properly.

Although the club were magnanimous over his departure, the implications of Saiz's move were not insignificant. Playing as a 10 within Bielsa’s system, the 28-year-old performed a pivotal role in the team, offering the creative spark that had carried Leeds to the top of the Championship table.

This creativity translated into productivity. Saiz, albeit with fewer minutes than most of the contenders, is still placed among the top five Championship midfielders for open play key passes per 90, as per data from the Football Whispers lab. 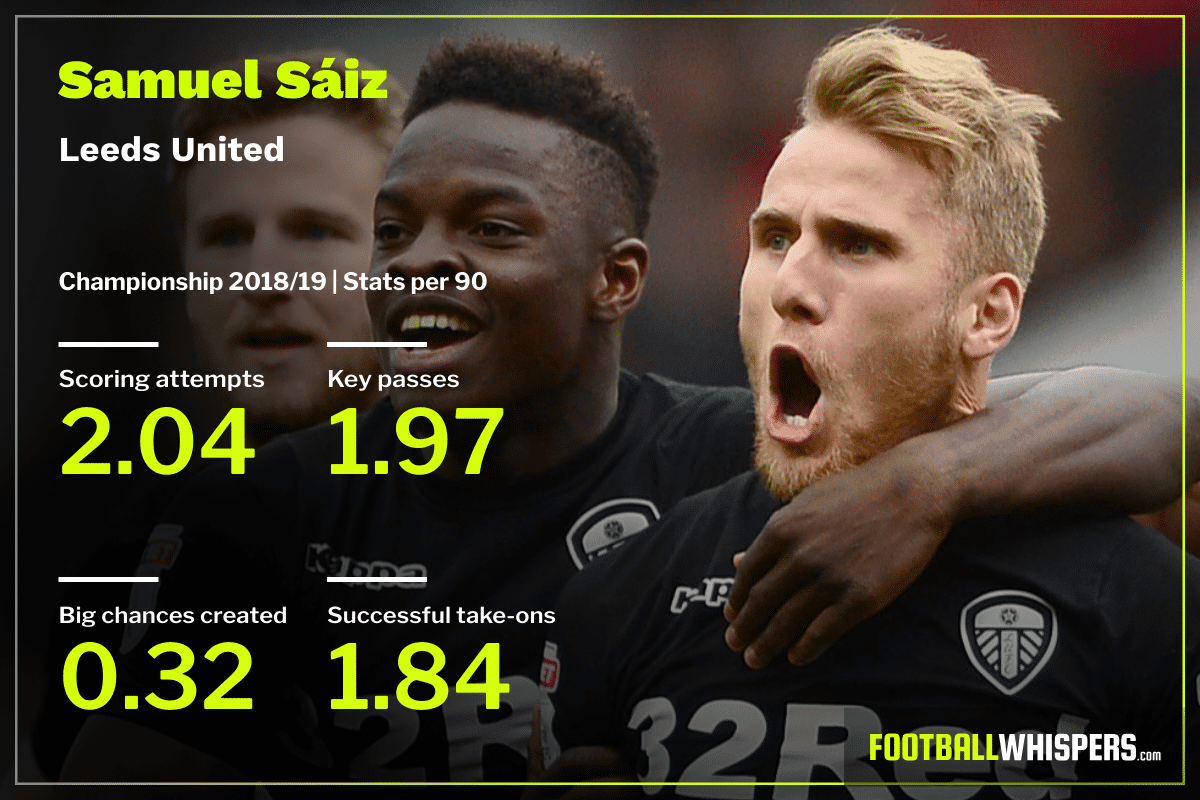 That Pablo Hernandez (2.22 open play key passes per 90) sits top of that list offers a clear indication why Leeds might be vying for promotion in the league.

Similarly, when it comes to big chances created per 90, both Hernandez (eighth with 0.44) and Saiz (23rd with 0.32) find themselves in the top fifty. Jack Clarke is in the list (13th with 0.4) but his minutes are low enough for sample size to be an issue. There are no other Leeds players in the top fifty.

It's clear without Saiz, the bulk of Leeds’ production in front of goal is coming from Hernandez. If he doesn’t perform, the team often finds themselves lacking a creative outlet.

So how has Marcelo Bielsa tried to deal with the hole left by Saiz's departure?

To answer this question, it’s important to understand the way Bielsa’s system works. With Saiz in the team, Leeds would generally set up with a back four, two central midfielders, a No.10, Saiz in this case, in front of them, two wide forwards and a striker.

In possession, the deepest-lying midfielder – usually Kalvin Phillips or Forshaw – would drop towards the centre backs to help with build-up play and the full backs would advance down the pitch, resulting in a situational 3-3-1-3 going forward.

But without Saiz, Bielsa lacked a player with the profile he wanted for the No.10 role. At first, the Argentine used Mateusz Klich in the position with two centre midfielders behind him. But Klich’s strength is primarily as a box-to-box ball carrier, starting from deep and driving forward towards the opposition goal or arriving late in the box to finish off attacking moves.

The other option was to keep Klich in a midfield two ahead of a deep-lying midfielder. With Phillips and Forshaw alternating between suspension and injury, the only other option was Hernandez playing in the centre.

Now, you might think Hernandez would suit the No.10 role. But in Bielsa’s system, the 33-year-old has made the wide forward position his own.

If you compare the personas of the two Spaniards, Hernandez and Saiz, you will see that they are very different. Obviously, with Hernandez entering the twilight of his career, the wider position suits him: it gives him more time on the ball and allows him involvement in the build-up phase or to benefit from his crossing.

This might seem like a subtle change in structure but you can perceive the impact it had upon Leeds United’s attacking play.

If you compare Leeds’ team personas before and after Saiz was frozen out of the team, you will see they are broadly comparable.

However, there are important differences. Without Saiz, Leeds are more reliant on long balls and crossing. There has been an uptick in high possession play and shot domination, but these would correlate to the fact Bielsa's side have lost a little of their edge when it came to counter-attacking.

Of course, there was the added element that opponents have sat deeper against Leeds during the second half of the season. But the Whites have lacked someone who can sit a little further forward and create chances, often at speed.

The result has been a slow-down in front of goal. After Saiz left, Leeds’ goals per 90 dropped from 1.73 to 1.61 and their big chances created also fell from 1.46 to 1.42. And this was all with Leeds seeing more of the possession, making more passes, and enjoying more shots.

Bielsa was clearly unhappy with the drop off. Rather than persisting with Hernandez in the central midfield, he looked elsewhere in his squad for someone who would fill the No.10 position.

Enter Tyler Roberts. In recent games, Bielsa has moved the youngster into a more attacking central midfield spot and the results have been remarkable. Two assists in the West Bromwich Albion game, both from advanced positions, and Leeds fans were reminded of what it was that they had been missing since Saiz’s departure.

Although there is not enough data available at this point to say anything with any certainty, the early signs are good.

This could hardly have come at a more opportune moment. With ten games to go in the season and a season-defining game on Saturday, Marcelo Bielsa will be hoping that Roberts continues to be the solution to the puzzle that Saiz caused.