From Barcelona to Watford. Leo Messi to Troy Deeney. It's not a path taken by many players, but Gerard Deulofeu did last month when he joined the Hornets on loan until the end of the season.

The contrast between the two clubs could not be more stark. The Catalans are 24-time title winners and five-time European champions to boot. Watford reached the FA Cup final in 1984 where they lost to Everton.

Deulofeu arrives at Vicarage Road after making 17 appearances in the first half of the season, scoring twice. However, the 23-year-old was afforded just five starts in La Liga. So he opted to swap playing with Messi, Luis Suárez and Philippe Coutinho for Deeney, Richarlison and Abdoulaye Doucouré.

In the eyes of most – if not all – that would be seen as a backwards step. But the Spanish international does not see it that way.

“I know I'm coming from Messi, Suárez and Andrés Iniesta, but I'm here now,” Deulofeu said this week. “I know about the situation at Barcelona.

“I came knowing Neymar was in the team. After Neymar went [to PSG] Ousmane Dembélé arrived and then Philippe Coutinho.

“If you want to be in the top teams, you know you have good competition for your place, but in the last two months, I didn't play. I don't have confidence so my solution is to come here, and to regain that confidence.

“I want to play more minutes. I'm a player who doesn't want to stay on the bench or not in the squad. I'm happy to be here and I want to work.”

Deulofeu's work will take him until the end of the season when his loan agreement expires. After that his future is unclear, although he is used to that. Last summer he returned to Everton after excelling on loan at Milan for six months, scoring four times in 17 Serie A outings for the Rossoneri.

After recapturing his best form at San Siro, talk centred around whether Barça would active a buy-back clause which would expire in the summer of 2017. Not wanted by Ronald Koeman at Goodison Park, Deulofeu returned to the Catalan side after they paid the £10.6million price stipulated.

His arrival was seen as one of two things. Either a sign Barça could not attract the calibre of player they had been able to previously or, more likely, a short-term outlay in order to make an investment.

But he has not played enough for the Blaugrana and returns to the Premier League with something to prove.

“There is life beyond Barcelona,” he told The Guardian in October 2015. At that point he was thriving in an Everton side that, under the stewardship of countryman Roberto Martínez, were lighting up Goodison Park after the more prosaic style of David Moyes.

After falling out of favour under Koeman he proved leaving Barça was not the end of the world at Milan last season, posting 5.6 dribbles per 90 (three successful) as well as 2.3 shots per 90 (one on target) and making 2.6 key passes per 90.

This term it is Liverpool transfer target Richarlison who leads Watford in all of those metrics. However, he trails the Hornets' new No.7 in two of the three. 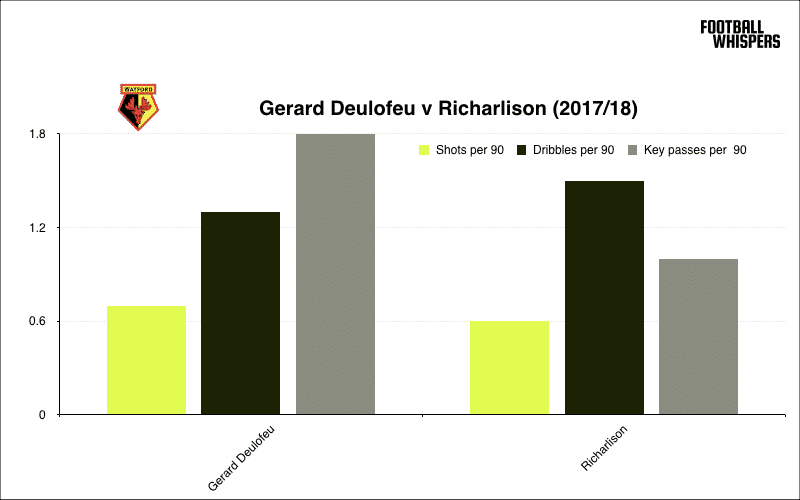 After leaving Barcelona for good in 2015, Deulofeu told The Guardian: “I want to have my career, not sit on the bench. I want to work hard, to push myself. I want to play.” Returning to the Camp Nou to a bit-part role would not have been what he had in mind when he made the switch last summer.

That is why his subsequent loan switch to Vicarage Road could prove a shrewd move for all parties.

Deuloefu joins a Watford side in transition following Marco Silva‘s sacking. Javi Gracia has inherited a squad woefully short on wide players and, in the absence of the injured Kiko Femenía, pace.

Impressive though Richarlison has been, the Brazilian needs a break having played constantly in his maiden campaign in Europe. André Carrillo, meanwhile, has not got going with any consistency yet.

And that is what Deulofeu needs to find. Quick, direct and benefitting from a low centre of gravity not dissimilar to club-mate Messi, he can terrorise full-backs for fun. But addressing those parallels, Deulofeu admitted: “It created too much expectation among Barcelona fans. There’s only one Messi.”

There is little doubt about his potential, though. Deulofeu was once punished by Barcelona for telling rival youth players to “pass by the dressing room afterwards and I'll give you an autograph.” Meanwhile, ex-Barça team-mate Rafinha once declared Deulofeu was a future Ballon d'Or winner. The accusation, though, is he lacks the maturity to reach his undoubted potential.

His former coach at Sevilla – another loan side between Everton stints – Unai Emery, once said: “Gerard has brutal qualities but lacks others. Put him out there, one-on-one and…pfff. But make him play with team-mates, on a big pitch, where he has to go up and down, it’s hard. He doesn’t have that maturity or capacity for sacrifice yet.”

Now is the time to change that. Watford need someone who can unburden Richarlison of the responsibility of being the team's creative leader. Deulofeu needs a run of games to show he has matured and can cut it in one of Europe's biggest leagues.

In one sense his loan move is a marriage of convenience. But then, being a player at a Pozzo club is just that. The Hornets' Italian owners are famed for their ability to spot a rough diamond, polish him up and then sell him on at a huge profit. The only difference is Deulofeu isn't theirs.

He has already given a glimpse of what he can do on his debut at Stoke on transfer deadline day; scampering down the right before slinging a dangerous cross into the near post for Richarlison to stab over.

If he can continue in the same vein between now and the end of the season the Hornets should quash any lingering threat of the drop. And Deulofeu will justify the decision to switch the Camp Nou for Vicarage Road.