With all eyes seemingly fixed on what the Premier Leauge top six are, or aren’t, doing in the transfer market, it’s allowed Brighton and Hove Albion to complete one of the signings of the summer.

The move went under the radar but in Leandro Trossard, the Seagulls have bagged themselves a game-changing talent, and they haven’t had to break the bank to do it – the 24-year-old arrived from Genk for a reported £14million.

The attack is an area Brighton had to improve and they’ve acted swiftly to provide Graham Potter with reinforcements.

Alireza Jahanbakhsh struggled to replicate his Eredivisie form during his debut campaign in the Premier League while injuries deprived Chris Hughton of the services of former Club Brugge star José Izquierdo for large parts of the 2018/19 season.

✍️ You’ve waited a while, so here you go…

? Breaking news brought to you by @eToro.#BHAFC ?⚪️

It meant the options going forward were fairly limited and there was an overreliance on Pascal Groß. The Seagulls scored just 35 times in the English top flight last term, an average of 0.92 per game.

Defensively they weren't that bad. Yes, they conceded 60 but Watford, who finished in 11th conceded 59 while sixth-placed Manchester United conceded 54. What really dragged Brighton into a relegation battle was their lack of potency in attack.

One player can't solve that single-handedly but Trossard goes a long way to help open the floodgates. Alongside Groß, Izquierdo, Jahanbakhsh, Locadia and Andone, the 24-year-old could be the spark needed to get everyone firing.

Deployed primarily on the left, Trossard likes to cut in onto his favoured right foot. This is a common trait in wide forwards but unlike most, the former Genk man isn't all about raw pace and explosive acceleration.

He morphs into something of a playmaker in the attacking midfield position and begins pulling the strings with delicate, lofted balls over the top and incisive, crisp passes into feet. 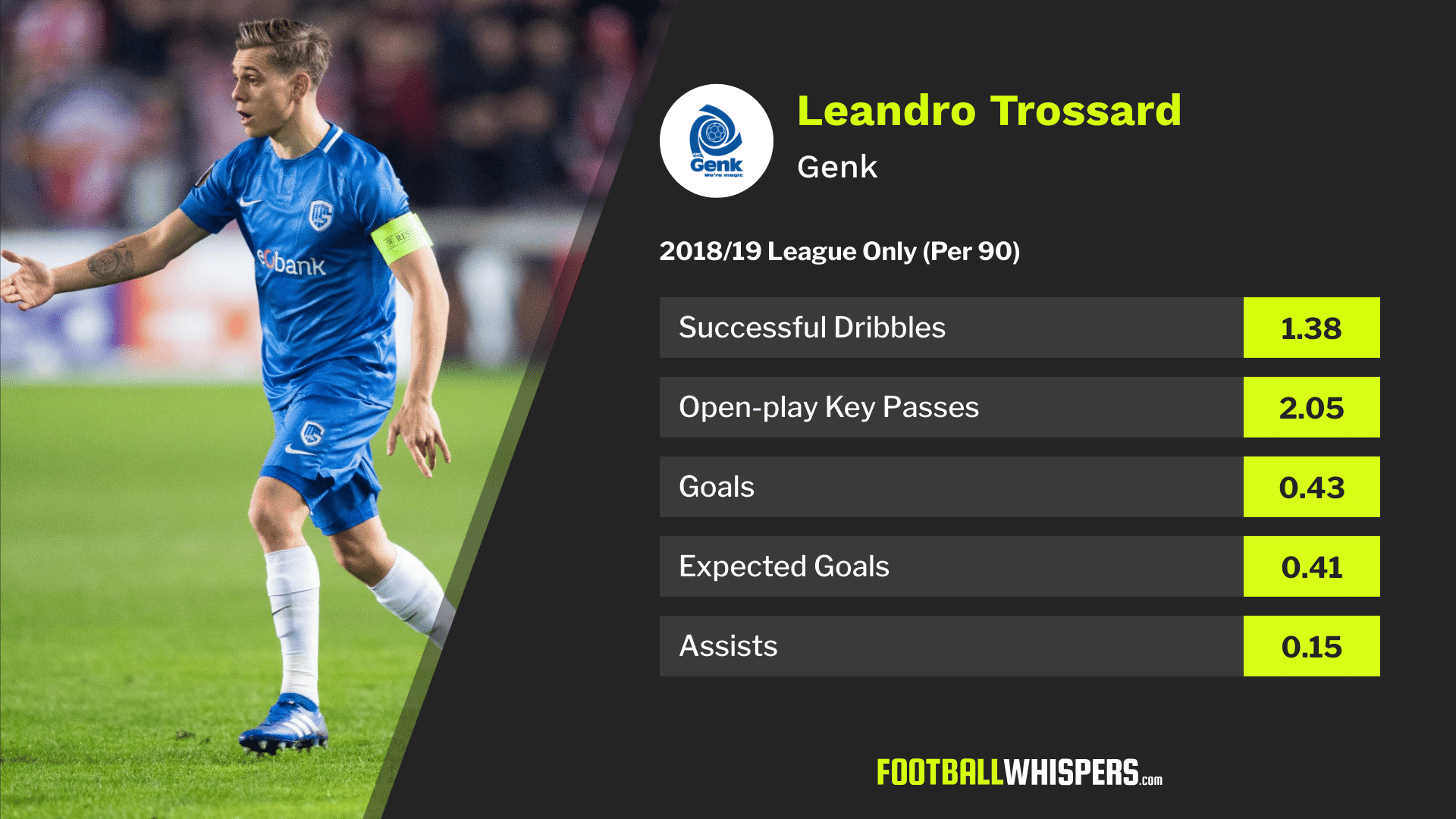 Last season in the Belgian league he averaged over two open-play key passes on a per 90 basis. It's an impressive feat in isolation but it's even more remarkable when you consider he averaged just 40 passes per 90.

Most playmakers see a lot more of the ball, so Trossard has managed to be a creative hub with fewer touches than, for example, Xherdan Shaqiri. The Swiss international averaged 56 passes for Liverpool last term with just 0.7 of those being key passes.

But playmakers in 2019 also need to be goal threats; Trossard is just that. He averaged 0.43 goals with an expected goals average of 0.41, it means his return is sustainable. He's also getting into dangerous areas on a regular basis, averaging close to six touches in the opposition's area per 90. So he isn't someone relying on wonder strikes to inflate his tally.

There's no reason Trossard can't continue to get into those positions even though he's playing for a new team in a new Premier League. Perhaps opportunities won't be as frequent, with Trossard no longer playing in a dominant side, but he's still an added goal threat with reliable tendencies in the 18-yard box.

And he's not just going to give Brighton something offensively, he'll be an asset defensively too. He presses from the front and last season won possession back 2.22 times in the middle third and 2.19 times in the defensive third. He's got the work rate and the quality to really shine in the Premier League.

If Potter makes him a key part of the forward line then the Seagulls could soar.