Much has been made of Belgian football's golden generation in recent years. Yet the mines from which many came is often overlooked.

Take Genk, for example. The club produced Kevin De Bruyne, Thibaut Courtois and Yannick Carrasco – all of whom were included in the country's 2018 World Cup squad – and Christian Benteke, whose stock as admittedly fallen in the last 18 months.

And it's not just homegrown stars who've made their name at the Belgian club. Sergej Milinković-Savić, Leon Bailey and Kalidou Koulibaly all built their reputations with Genk before moving on to Lazio, Bayer Leverkusen and Napoli respectively.

It's little surprise, then, scouts from the biggest sides in Europe often travel to the Luminus Arena to unearth another gem. Sander Berge is one man who has attracted interest, he was linked with Arsenal in 2017, and evidently, the Gunners recruitment team have been impressed with another the club's stars; Leandro Trossard.

According to reports, the Premier League giants are considering a £22million summer move for the 24-year-old Belgian And Trossard's agent, Josy Comhair, has confirmed Arsenal's interest stretches back to August.

“Leandro wants to leave Genk through the big gate,” Comhair told Belgian outlet Sporza. “I contacted representatives from Arsenal and Tottenham and a Tottenham, nobody has wanted to confirm that Trossard is an option.

“But Arsenal does. They told me Leandro has a very interesting profile and that they have been following him since August. They added that it was a good choice to stay in Genk for another year. They said they have kept a close eye on him.”

Arsenal can't afford to make any mistake in the transfer market this summer – the Gunners only have a reported transfer budget of £45million – so going big on Trossard is not only a major commitment but also a show of faith.

The cynical fan may question why, if the winger is worth £22million, he hasn't been nabbed by Europe's biggest clubs at an earlier stage of his career. The answer is that Trossard wanted to stay at Genk, the club he supported as a boy, to ensure his development wasn't stunted.

He explained in an interview with Sporza in November: “The young boys here [at Genk] sometimes speak to me and they say, ‘I want to be like you'. That makes me happy.

“I think I'm a good example in this area. Everyone must realise that it's not just about being here an then immediately going the top level.”

That time spent honing his game in Belgium has served Trossard well and this season has been his breakout campaign. He has struck 17 goals, eleven of which have come in the Jupiler Pro League, and claimed eight assists in 29 appearances. 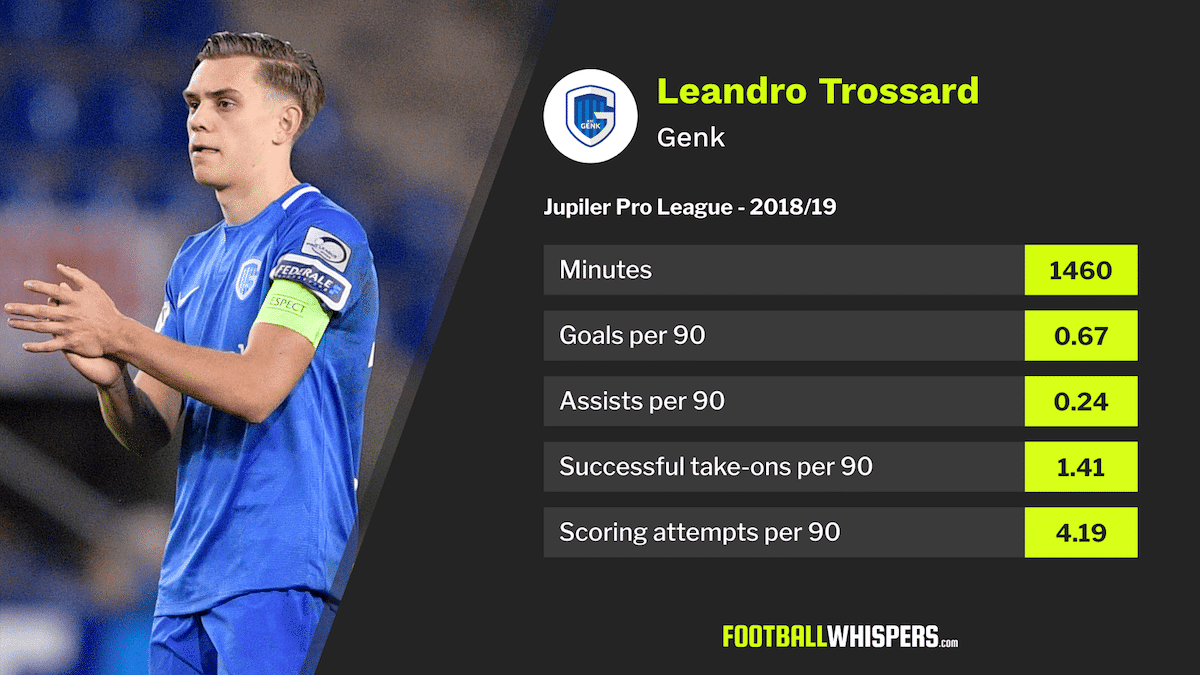 The graphic above highlights Trossard's impact in the Belgian top flight this term; he is far more than just a goal threat and is a regular creator for his team-mates.

He has registered 2.09 open play key passes per 90 this term, a figure no other attacker in the division can better. It's the same story touches in the opposition box per 90 (6.28) and for his scoring attempts per 90, which are included in the graphic above.

What aides Trossard, and makes him an unpredictable player for defenders, is he is genuinely two-footed – three of his ten league goals from open play have been with his ‘weaker' left.

The Genk No.14 is also a threat from outside of the penalty area, something which he demonstrated emphatically earlier in the campaign against Cercle Brugge.

If Unai Emery is to continue with his 4-2-3-1 shape next season, and there is nothing to suggest otherwise, then Arsenal need to enter the transfer market and sign a winger.

Henrikh Mkhitaryan hasn't produced enough since arriving from Manchester United in January 2018. Alex Iwobi is a threat but is better in a central role. And Pierre-Emerick Aubameyang is unquestionably more effective as the main striker.

Reiss Nelson's return from a productive loan spell at Bundesliga side Hoffenheim will be welcome but he isn't enough. Which is why the Gunners want Trossard.

The Belgian may need time to adapt but his ability is without question. Arsenal may have to spend half their transfer budget to land the 24 year old, but the evidence suggests it would be a shrewd investment.