A team is 2-1 down heading into the last minute of play. A winger hits the byline and puts the ball into the area. It’s behind the striker, the one man fans want the cross to fall. Yet he sticks out his left leg and, at a stretch, manages to bring it under his spell.

He's six-yards out, facing away from goal. Undeterred by this, he attempts to pivot but stumbles. The chance looks to have gone. But, like a breakdancer, he spins, still sat on the floor, and pokes the ball between a defenders legs and into the bottom corner.

It's an ingenious finish. Not one that will be shown in highlight packages or likely to be named goal of the season, but if you needed a goal to describe the player it would be this one.

It was thought up on the spot due to the sheer desperation of wanting to rescue a draw from the jaws of defeat. The striker's unpredictability, combined with his tenacity and must-not lose mentality, makes him even more dangerous than your stereotypical frontman.

No, it's not Lionel Messi. It's not Luis Suárez. You'd be wrong thinking this was Sergio Agüero or Carlos Tévez too.

It was Lautaro Martinez. Squint, though, and it could have been any one of those aforementioned players. That's not to suggest he's as good as those four, or at that he'll ever reach their lofty heights, but the Racing Club striker is certainly a player to watch.

In the Primera División this season he's been involved in nine goals in just 692 minutes of play, form that hasn't gone unnoticed. It's why the 20-year-old is a Inter, Real Madrid, Atletico Madrid, Arsenal and Liverpool transfer target.

Back in December it appeared as though he'd agreed a deal to join compatriot Diego Simeone, a former manager of Racing Club, at the Wanda Metropolitano stadium.

Reports in TuttoMercatoWeb claimed the player's agent, former Real Madrid player Rolando Zárate, had revealed Martinez was on his way to Atletico amid interest from Inter and Torino.

“It's always nice to see clubs take an interest in him.” Zárate said. “I've read about these rumours, but Lautaro has decided his future. He signed [a deal] with Atlético two weeks ago and will join [Diego] Simeone's team soon.”

The 2013/14 La Liga champions refuted these claims and a move failed to materialise.

A new contract for Martinez in January came out of the blue – the forward's release clause at Racing being upped to €20 million, according to reports. And he appears determined to stay put for now: “A lot of offers materialised and I decided to stay.”

However, he does want to play in Europe and has mentioned it numerous times in interviews. Rumours of a move to Inter Milan persist and the Serie A side have recently had a bid turned down according to TyC Sports.

Who is Lautaro Martinez?

The Bahía Blanca-born forward joined local side Liniers in 2013 and caught the eye of bigger clubs playing in the under-17 division. Racing Club made their move in January 2014 but at one stage it appeared as though this was a premature switch on the youngster's part.

Martinez suffered from homesickness and was angling for a return to Liniers, but teammate Braian Mansilla convinced him to stay and, after a bedding in period, he began to flourish.

He netted 53 goals in 64 appearances in the reserve league. He replaced Diego Milito to make his league debut in November 2015 and it was a dream come true for the striker: “I dream of playing in a Cilindro [Racing's home ground] full of people and being like Milito,” Martinez said to the club's official website after that game.

If Milito's retirement left the door ajar for Martinez's path into the first-team it was the injury to Lisandro Lopez which saw him become the main man at the Estadio Juan Domingo Perón.

What are Lautaro Martinez's strengths?

At this stage he's by no means in their league quality wise but he’s got a similar profile to the three strikers who have all devastated the Premier League with their style.

It all looks chaotic and frantic, however, at the same time he has it all under control.

And when Martinez gets the opportunity in the penalty area he’s calm and composed. He’s scored a variety of goals, with both feet, from calm placed finishes and tap-ins to emphatically struck shots that he bends into the corner from outside the penalty area.

He’s not reliant on others to create chances and is pretty self-sustaining which is key for a striker, especially in the Premier League, as some teams like to sit deep and smother the space.

In the World Football Index scouting spotlight series, they detail exactly what Martinez is all about as a player.

One of his biggest strengths, though, is his work rate. It's not something that can be quantified but more and more clubs now want a complete forward, one who doesn't shirk his defensive duties. Simply being a goal threat is no longer good enough.

In a way he's similar to Roberto Firmino, the Liverpool striker is one of the most underrated forwards in Europe right now and Jürgen Klopp's system is reliant on the Brazilian being in the starting XI. 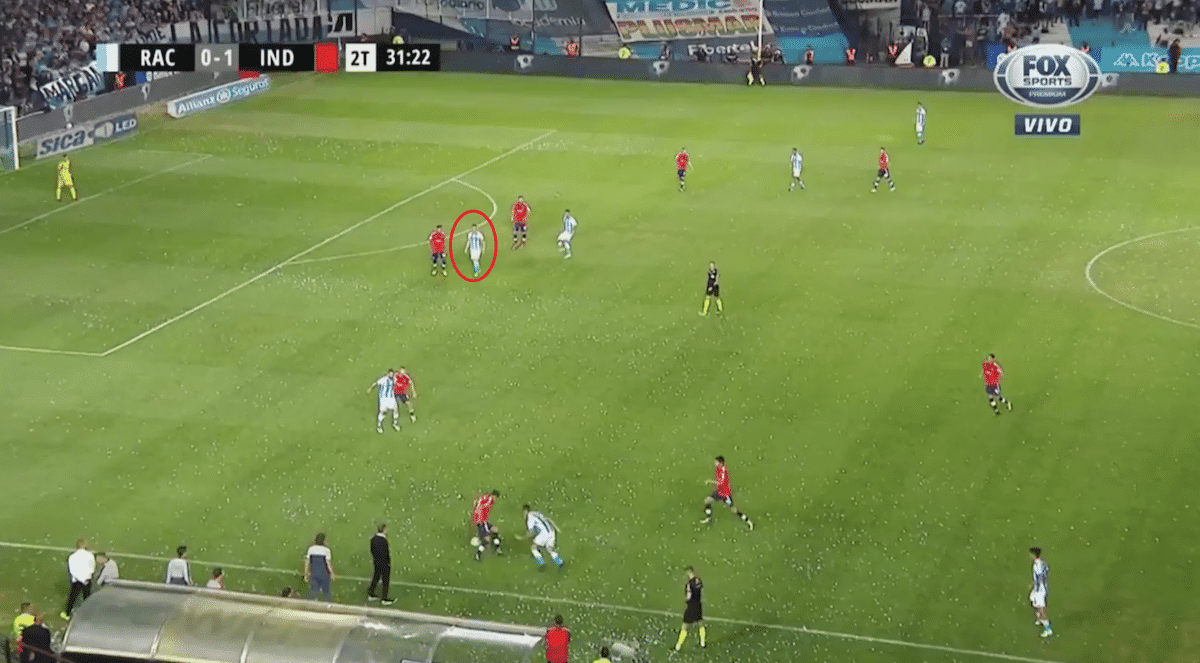 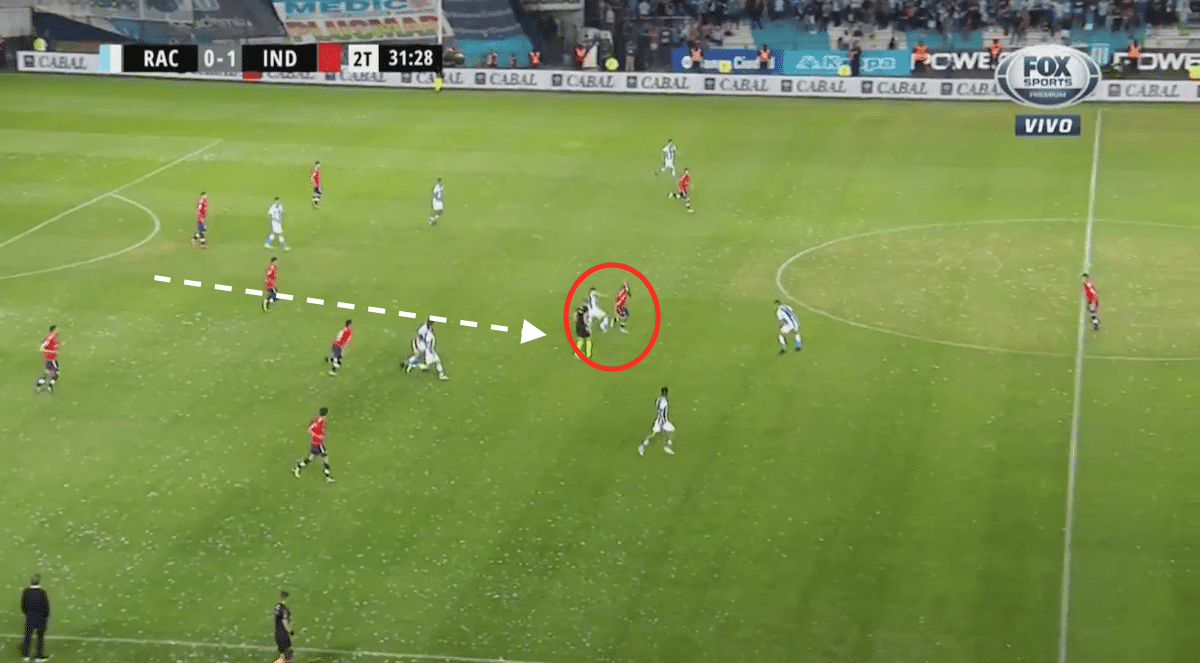 In the above pictures you see the sort of effort Martinez puts in to win the ball back for his team.

In the first he's circled on the edge of the penalty area. In the second he's chased back after Racing Club lost the ball. He dispossesses the man in possession and chases the loose ball, forcing Independiente to hastily clear. They lose possession and the home side can mount another attack.

That desire to close down opponents means Martinez would work in a counter-pressing system. Not just because he tracks back but because he does so intelligently. He robs the ball off his opponent in the second picture but does so in a way to get his team on the attack. Others in this situation poke it backwards and allow Independiente to push out.

Would a move make sense?

This is where it gets tricky. Martinez has the profile to thrive in the Premier League but he's a player who wants to be playing football on a regular basis in order to continue his development. He's every right to want that. He's a special talent and it would be a waste to see him making the off Carabao Cup appearance.

As things stand right now, is he going to be in the starting XI for any of the top seven? Doubtful. The rest of the clubs in the top flight are unlikely to want to spend £25million on a striker who is yet to step foot in Europe. It's a risk and not one many want to take.

So like those before him, he may have to move to a club in Europe, like Maximiliano Romero who moved to PSV Eindhoven, and treat it like a stepping stone before bigger clubs are convinced he can cut it.

Make no mistake about it, though, he's destined for big things and could become the latest in a longline of South American forwards who have terrorised Premier League defenders.