He may only have only scored 16 goals since his move to Inter in the summer of 2018 but that isn't putting Europe's elite off Lautaro Martínez.

The 22-year-old is believed to be a transfer target for Manchester United and Barcelona and his current release clause, rumoured to be in the region of £82.9million, isn't a deterrent.

The Serie A leaders are reportedly working on a new deal for the Argentina international, one that would see that buyout clause rise north of £100million.

If you aren't familiar with Martínez and are just going off his stats then these measures to lock him down to a new long-term deal may seem excessive. By no means prolific, his return of 0.7 goals per 90 in the Italian top-flight has been boosted by penalties. Without them, that average drops to 0.42.

For context, most £100million-rated forwards average closer to one goal per 90, with some even exceeding it.

Martínez is yet to make 50 appearances for the Nerazzurri following his £20million move in July 2018. So why are teams seemingly prepared to offer Inter quadruple what they paid for the young Argentine?

At this stage of his career, he’s by no means in that trio's league in terms of quality but he’s got a similar profile to the three strikers who have all devastated the Premier League.

Martínez looks chaotic and frantic, however, at the same time he has it all under control. 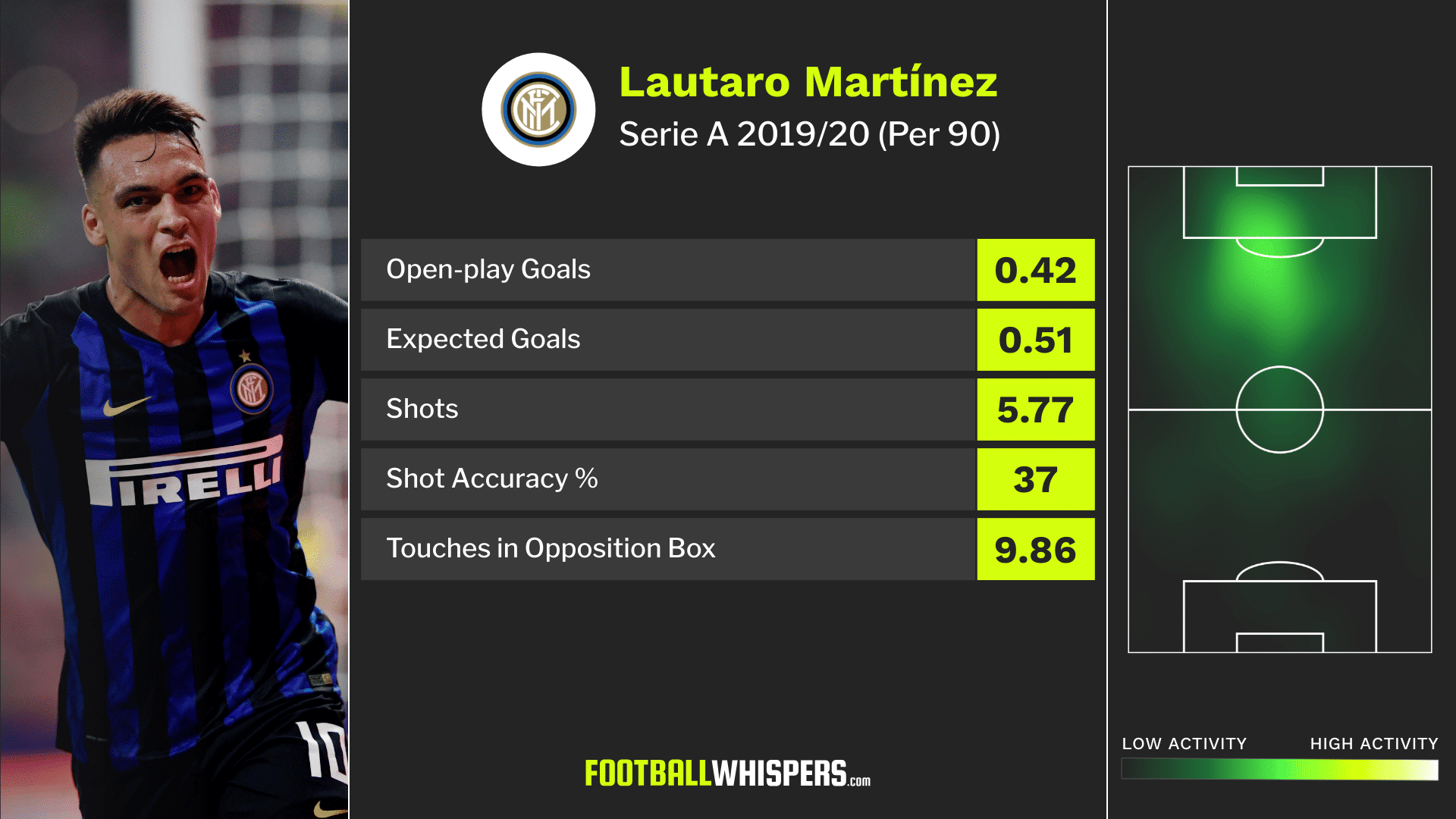 And when given an opportunity in the penalty area he’s calm and composed. He’s scored a variety of goals, with both feet, from placed finishes and tap-ins to emphatically struck shots that bend into the corner from outside the penalty area.

He's currently underperforming his open-play expected goals average of 0.51 but all forwards improve with experience. The biggest takeaway from this is he's getting into dangerous areas on a regular basis.

He’s not reliant on others to create chances and is pretty self-sustainable. That is key for a striker, especially in the Premier League, as several teams like to sit deep and smother the space.

One of his biggest strengths, though, is his work rate. It’s not something which can be quantified but more and more clubs now want a complete forward, one who doesn’t shirk his defensive duties. Simply being a goal threat is no longer good enough.

He’s similar to Roberto Firmino, the Liverpool striker is one of the most underrated forwards in Europe right now and Jürgen Klopp’s system is reliant on the Brazilian being in the starting XI.

Barça know how important it is to have a defensive forward leading the line, the sort to create space for others. It's what made Suárez's partnership with Lionel Messi so devastating. The fact they've managed to identify a viable replacement is a big positive and is perhaps why the steep release clause isn't putting them off.

Manchester United tried to use a false nine earlier in the season with Anthony Martial. The Frenchman would drop deep and drift wide to free up areas for Marcus Rashford but an injury resulted in those plans being shelved.

Furthermore, it doesn't come naturally to the former Monaco man. He's a wide-forward and though he can do a job as a false nine, his lack of experience and know-how will be evident when it matters most.

If the Red Devils want to get the best out of Rashford then a player like Martínez could be key to that. He'll chip in with goals but the idea would be that the front three all get in on the act instead of the goals being funnelled via the main striker.

Ask Liverpool fans now and they'd not hesitate to pay £100million for Firmino. Martínez could turn out to be a bargain, even if the release clause is what it takes to land him.