Rafa Benítez has made few mistakes in his two-and-a-half seasons at Newcastle United. However, attempting to jettison Jamaal Lascelles was, without doubt, almost his biggest.

The former Nottingham Forest centre-half was pitched into an ailing Magpies side at the end of the 2015/16 season but could not halt their slide into the Championship. Nothing could.

Installed as captain at the start of last campaign, aged just 22, the Derby-born defender led by example from the heart of the defence as Newcastle clinched the title to return to the top flight at the first time of asking.

But Benítez, with all his experience and medals, felt the 24-year-old was not good enough to marshal his defence in the Premier League. The signing of Florian Lejeune from Eibar looked set to end Lascelles' time as a guaranteed starter – possibly even his stint on Tyneside.

But then, seven minutes into the Magpies' top-flight return at home to Tottenham Hotspur, left-back Paul Dummett was withdrawn with injury. Later in the first half Lejeune suffered the same fate and Lascelles took his place at centre-back. The former England Under-21 international has not relinquished it since.

His leadership, as much as his ability on the field, has been mightily impressive for someone with fewer than 50 Premier League appearances to his name. “I’ve always been the biggest, the strongest and the fastest,” he the Daily Telepgraph earlier this season.

“I’ve been a captain since then, right through secondary school. It’s just something I’ve always done.”

It's why he is now, according to the Evening Standard, a Chelsea transfer target. For the second summer in succession the Blues will be looking for a new mainstay to their defence.

When captain, leader, legend John Terry bid a tearful goodbye to Stamford Bridge he passed to baton to Gary Cahill. But the England international's decline has been as steep as it has rapid and whoever is Chelsea boss next season they won't want to rely on him.

So is Lascelles good enough to thrive at Chelsea? We ran the numbers to see how the Newcastle defender matches up to the Blues' current options.

From a defensive point of view Lascelles does not come out particularly well against Chelsea's five current centre-backs, though he does win more aerial duels per 90 than any Blues player with 3.28. Only the much-maligned Cahill, with 3.12, comes close. 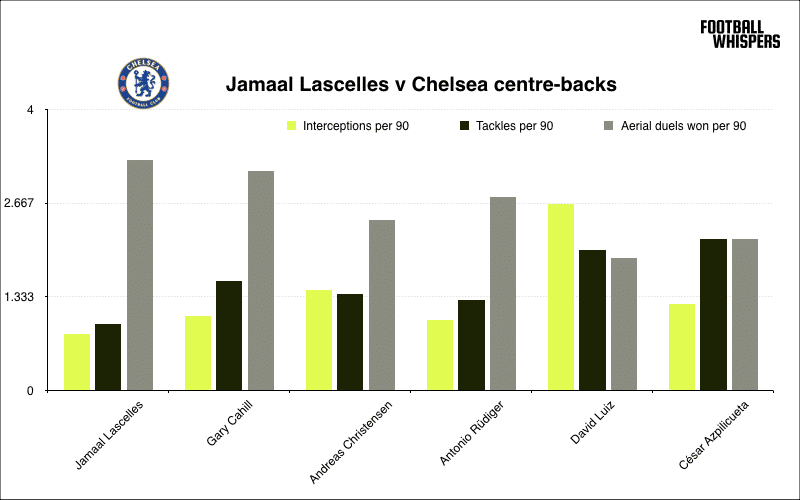 Otherwise the 0.8 interceptions and 0.95 tackles he makes per 90 put him some way behind Cahill, Andreas Christensen, Antonio Rüdiger, David Luiz and César Azpilicueta.

However, it is worth looking at the context of those numbers. Lascelles is part of a Newcastle side which see just 43.3 per cent of the ball on average – the second least in the Premier League to rock-bottom West Bromwich Albion (42.4 per cent).

Furthermore, the Magpies face 13.6 shots per game. Chelsea, for all their faults this season, are conceding just 10.1 efforts on their goal per match – the fourth fewest in the top flight.

With 55 per cent of the ball, on average, Antonio Conte's men enjoy far greater control of the game. Both are big factors which help contextualise Lascalles' defensive numbers.

By the same token it is worth noting that, per Understat, the champions' xGA (expected goal against) is just 23.63 – they have been breached on just 23 occasions. Newcastle's xGA, standing at 40.27, reflects their lack of possession and the number of shots they concede. They are over-achieving against that figure, though, having shipped 36 goals in 27 games. 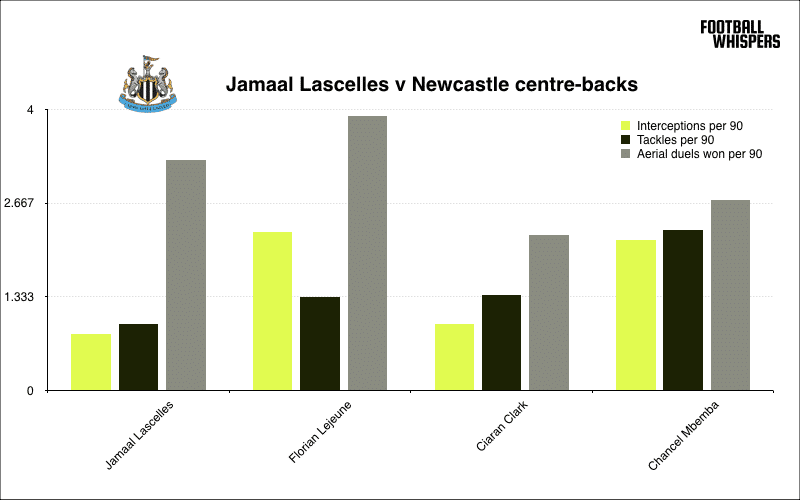 Perhaps a more accurate representation of Lascelles' ability is to compare him with Newcastle's other centre-halves. After all, as we have established, there aren't many parallels to be drawn between Chelsea and Newcastle in terms of the way their matches pan out and the pressure their respective defences are put under.

One might expect Lascelles to be head and shoulders above his defensive colleagues but, in fact, the opposite is true. Although he almost matches Lejeune (3.91) for aerial duels won per 90, he is behind each of his team-mates for tackles and interceptions.

It would be easier to make a case for him being an astute signing if he were the stand-out player in a struggling side held back by those around him. But that is not what the numbers suggest – far from it.

And herein lies an inherent problem for Chelsea. The Blues have been roundly criticised for failing to improve their starting XI in the last two transfer windows. Instead of buying proven quality to enhance the side, Conte's squad – much to his ire – has been padded out with mediocre squad players.

Lascelles would be just another example of Chelsea settling for second best.