Manchester City certainly don't need any new recruits this month. Sitting 12 points clear at the top of the Premier League, among the favourites for Champions League glory and in the Carabao Cup final, Pep Guardiola's squad already looks suitably equipped to push for silverware on multiple fronts.

It is this confidence in their strength in depth that allowed City to withdraw from the race to sign Alexis Sánchez, who instead joined rivals Manchester United, with the Citizens feeling the Chilean's salary demands outweighed their interest in the player.

That doesn't seem to be the case with Aymeric Laporte, though: City have triggered the French centre-back's £57million release clause.

Guardiola's men boast one of the best defensive records in the English top flight this season, so they are not in desperate need of the Athletic Bilbao star's arrival. But they want him, can afford him and think he adds value to their already talent-rich group, so why not?

City first attempted to signed Laporte in the summer of 2016, during Guardiola's first transfer window with the club. A deal was reportedly close only for the French defender to elect to renew his terms at San Mamés instead, raising his release clause from €50million to €65million.

Some within the City hierarchy were said to have been perturbed by Laporte's change of heart, and vowed never to move for the defender again. And, until recent deals such as Virgil van Dijk's £75million switch to Liverpool and City's own expensive pursuits of full-backs, the Athletic man's £57million price tag was deemed prohibitive.

But Guardiola remained a fan of Laporte, and the Catalan tactician, after weighing up a move for West Bromwich Albion‘s Jonny Evans, is ready to swoop for the 24-year-old France under-21 international.

In recent weeks, since his return from an injury layoff, John Stones has cut a nervous figure at the back for City, but there is little doubt that the England defender has improved under Guardiola's tutelage of the last 12 months, likewise Nicolás Otamendi.

While Laporte will not necessarily be a marked immediate upgrade on either Stones or Otamendi, the La Liga standout shares key attributes with each of the City pair, as well as offering unique strengths of his own and is a more viable long-term option than the injury-prone Vincent Kompany. 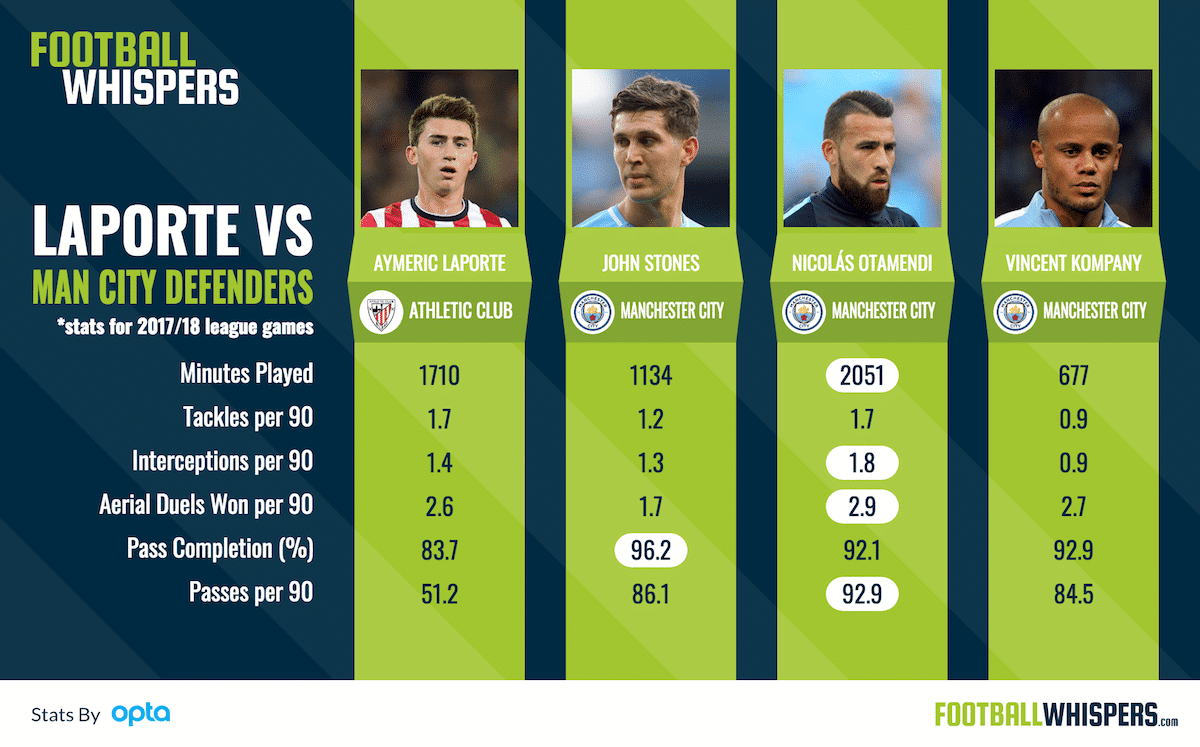 As the above graphic shows, Laporte, at 6ft 3ins, offers a similar degree of aerial prowess as Otamendi and Kompany, while pretty much matching the combative Argentinian when it comes to ball recovery. And although his passing statistics are not as immediately impressive as those already at the Etihad, this is as much a consequence of playing for a mid-ranking side such as Athletic, as opposed to operating within Guardiola's possession-dominating side, not blessed with the time on the ball and passing options City create.

Indeed, one of Laporte's greatest strengths is his passing. The left-footed centre-back has the confidence to stride forward into the midfield zone to link with colleagues, similar to Stones. But he also possesses a greater range of passing than any of City's current central defenders. 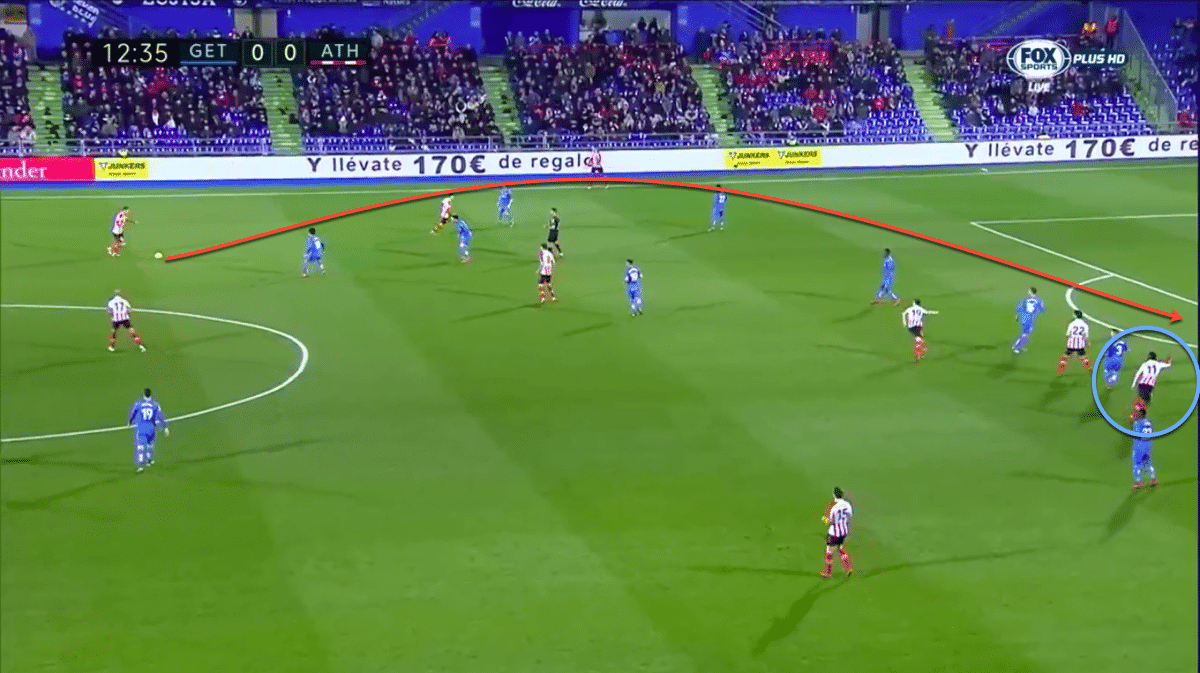 In the above image, we see Laporte's long-range passing ability in full effect. Spotting the forward run of winger Iñaki Williams, who has his hand raised, calling for the ball, the defender unleashed a pinpoint 40-yard pass to pick out the Spaniard. 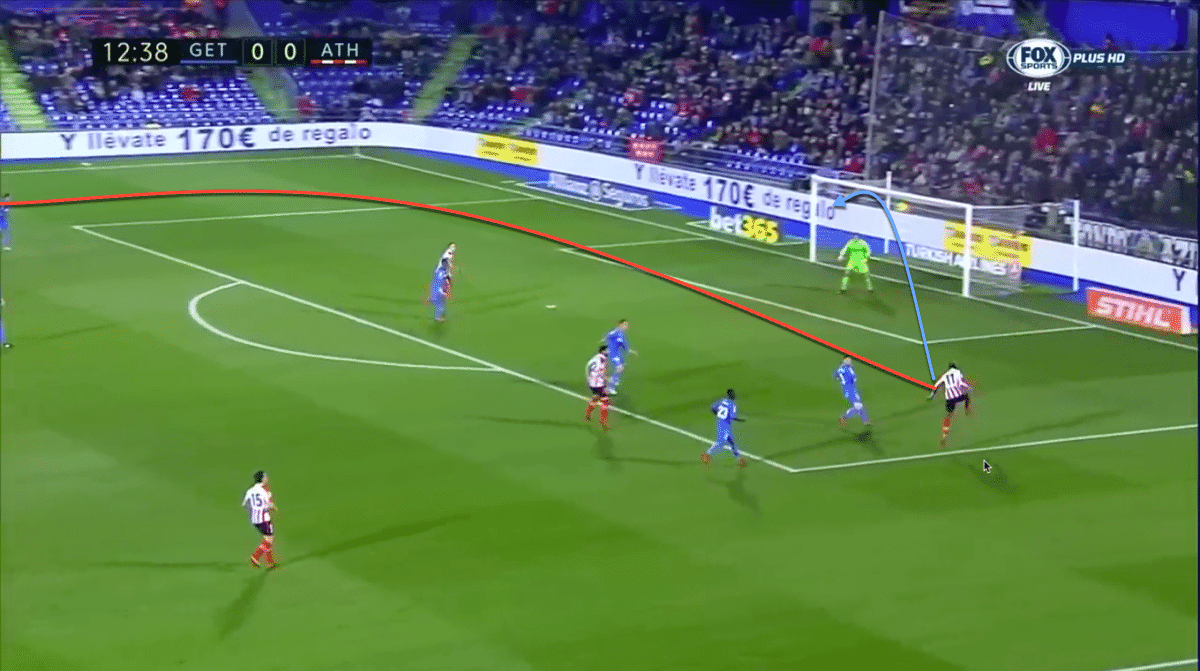 Williams then rifles a first-time volley into the far corner, which no player can be expected to pull off on a regular basis, not even City's gifted attackers. But the ability to switch play and pick out a winger in space is a tactic Guardiola came to use often during his time in charge of Bayern Munich, utilising Jérôme Boateng's accurate left foot, and could be a real asset in helping Raheem Sterling receive the ball in space wide on the right.

Laporte's average of 7.4 accurate long balls per 90 minutes is better than any City player this season, with Kompany (4.7) and Otamendi (4.2) coming closest.

The 23-year-old is not all about pinging the ball over great distances, though; his use of possession is intelligent and astute, able to break the lines of the opposition with a more delicate, considered approach. 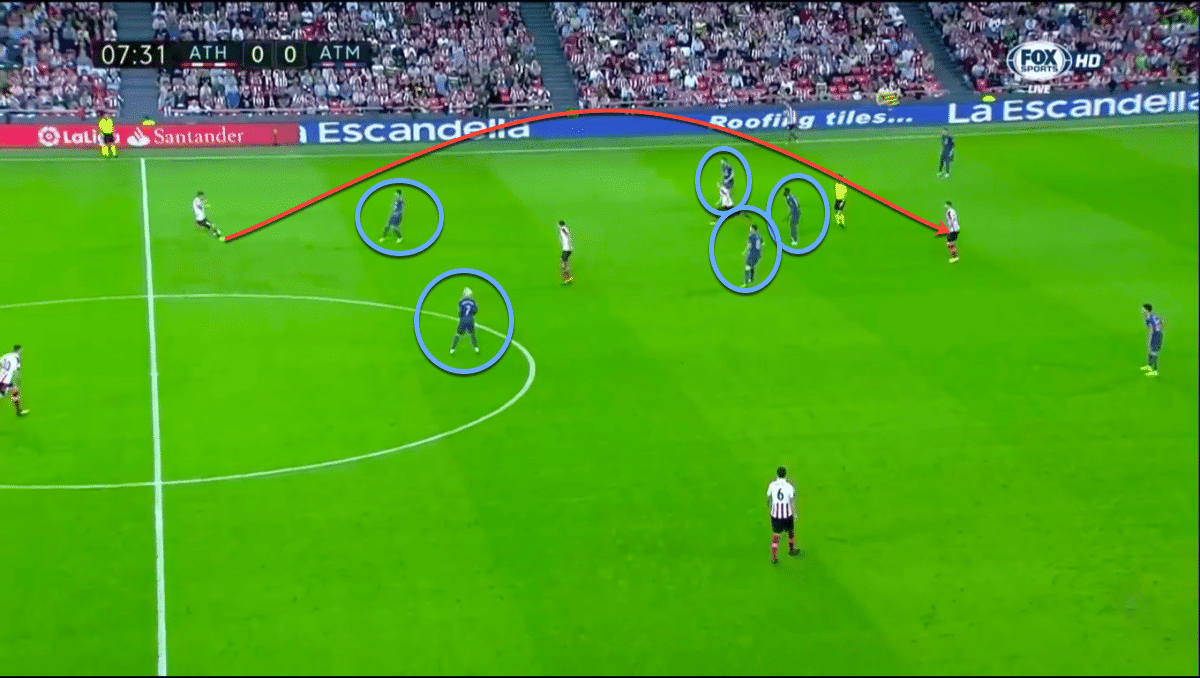 This time, against Atlético Madrid, we see Laporte bypass five Atleti players with a cleverly chipped pass into Aritz Adúriz, demonstrating the vision to spot a team-mate in space through a crowd of bodies and the technique to execute a difficult pass.

If there is any weakness in the Bilbao star's game, it is that he is not especially quick, at times lacking the recovery pace to get back into position after being caught up the pitch. With Guardiola's preference for an ultra-high defensive line, there may be moments when this is an issue.

That's not to say that Laporte is a slouch, though. While limited athletically, his positioning is usually good, and he shows the desire to get back and thwart a progressing attack whenever exposed. 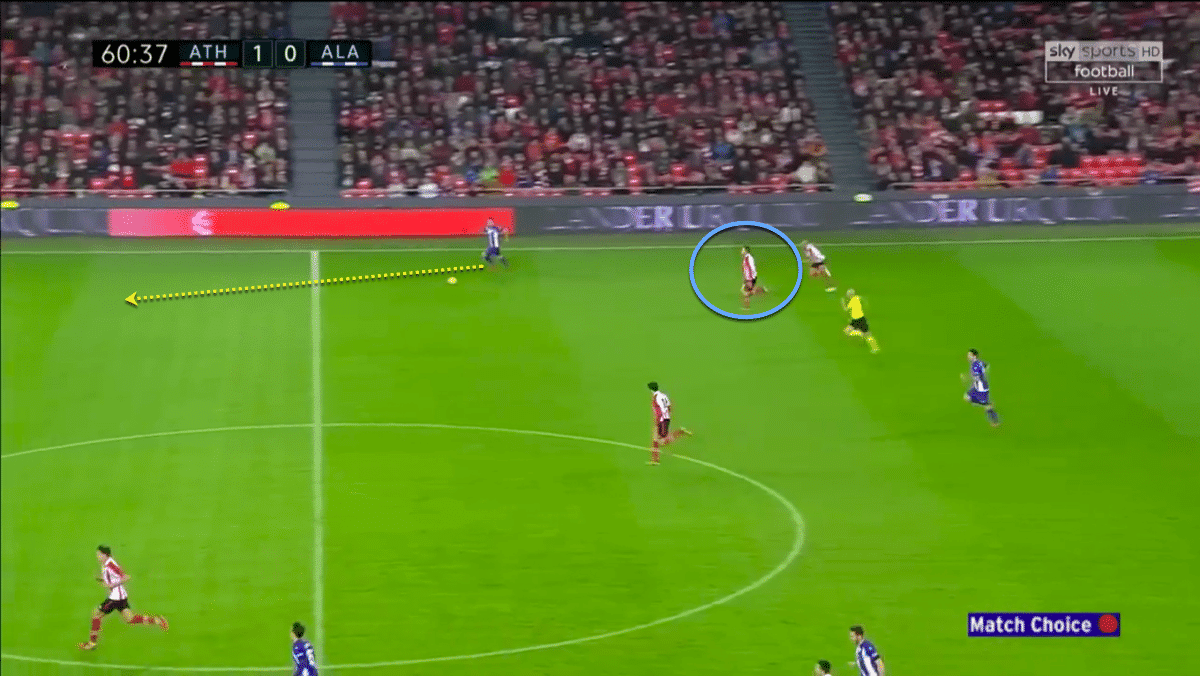 This example, from a game against Deportivo Alavés, shows Alfonso Pedraza breaking away down the right wing for the away side with Laporte (circled) caught up the pitch. 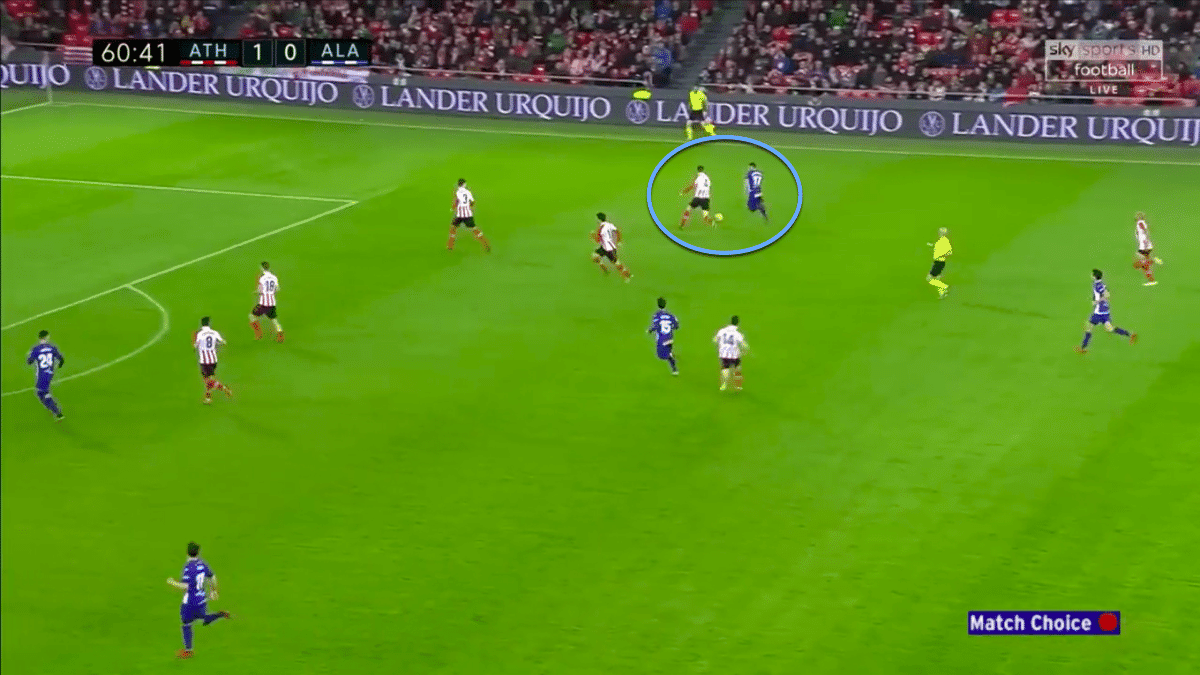 Laporte manages to close the gap on the Alavés winger and takes full responsibility for eradicating the threat he helped cause, getting tight to Pedraza and looking to win the ball back for his side. 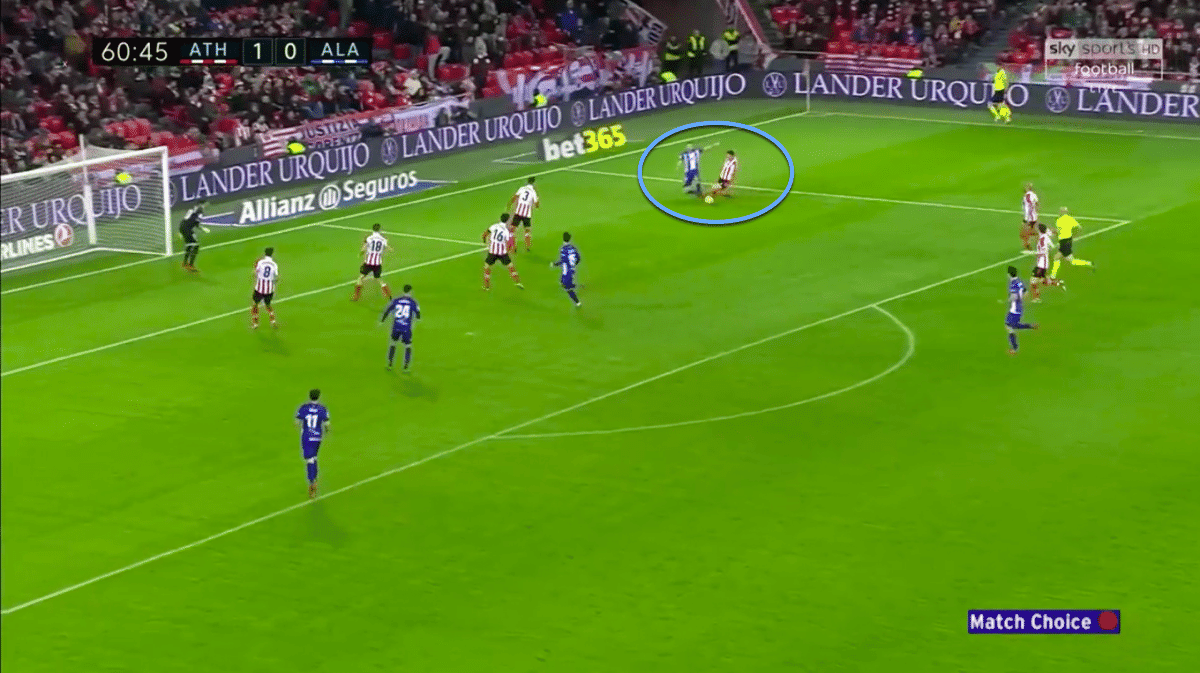 After forcing Pedraza wide, Laporte then cleanly wins possession as the Alavés man attempts to move into the penalty area. Using the outside of his left boot to nick the ball, the Bilbao defender avoids making the kind of heavy contact which could lead to a penalty. 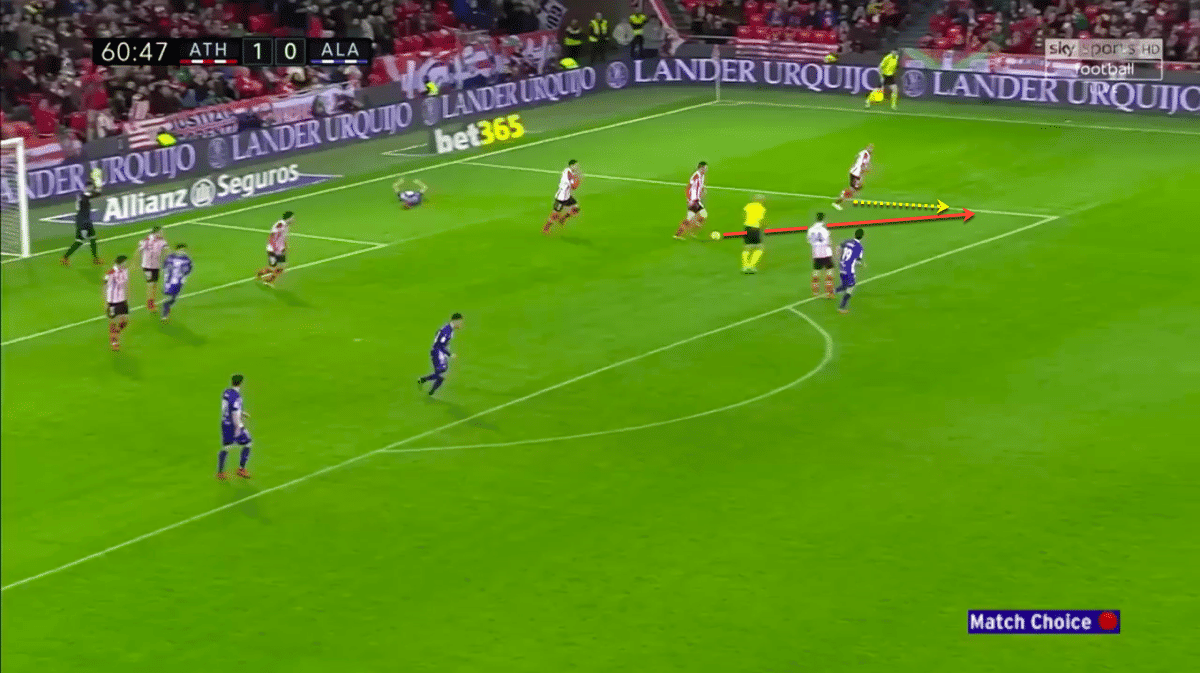 Laporte then single-handedly restores serenity to his backline by calmly stepping forward with the ball, getting his head up and making a simple pass to get Athletic back on the front foot.

There have been some question marks over Laporte's injury record recently, but his only major injury layoff came when he broke his ankle – an impact injury that could strike any player at any time – in 2016, which caused him to miss ten club games at the end of the season and ruled him out of contention for a place in France's squad for the European Championships on home soil.

Aside from that, he has only missed seven club games through injury since his senior debut in December 2012 according to Transfermarkt.com.

Having established himself as one of the finest defenders in La Liga by the age of 21, some feel the Frenchman has not progressed as expected in recent seasons. While there may be some merit to such theories, this is likely because a move to an elite-level club is somewhat overdue for Laporte; joining City now presents the chance for him to kick on once again and prove his top-level credentials.

With his broad skillset, age and room for development, even at £57million, Laporte represents value for the Premier League leaders. And, matching up well as a partner for either Stones or Otamendi, and available for the Champions League knockout phase, he could be the insurance policy Guardiola is looking for to ensure City don't slip on their march to silverware.