It had been a long, dark road back, but for Manuel Lanzini, hearing the West Ham United fans sing his name once again made it worth the wait.

Last year, things were going well for the Argentine. He ended the 2017/18 season strongly, signing off with two goals against Everton and looking forward to the World Cup having nailed down his spot in the national side under Jorge Sampaoli.

Then disaster struck. Lanzini ruptured his anterior cruciate ligament during a training session in the build-up to the quadrennial tournament in Russia.

His World Cup dream in tatters, Lanzini was told he would likely miss the entire 2018/19 campaign.

The Brazilian has enjoyed an excellent first season in England. He is the Hammers' top scorer with eight goals and his form has earned him a recall to the Brazil set-up, his solitary cap having come nearly four years ago.

In January, Pellegrini also added Samir Nasri, who had starred in the Chilean's title-winning Manchester City side during the 2013/14 season. However, despite an impressive performance and assist in the win over his former side Arsenal, the Frenchman has struggled to maintain his fitness.

Anderson, meanwhile, has not scored a league goal in 2019. He notched an assist in the draw with Liverpool but, as per the Football Whispers Story Mining tool, the 25-year-old's performances have dropped over the last two months, specifically when it comes to his average expected goals (xG) per 90 minutes. 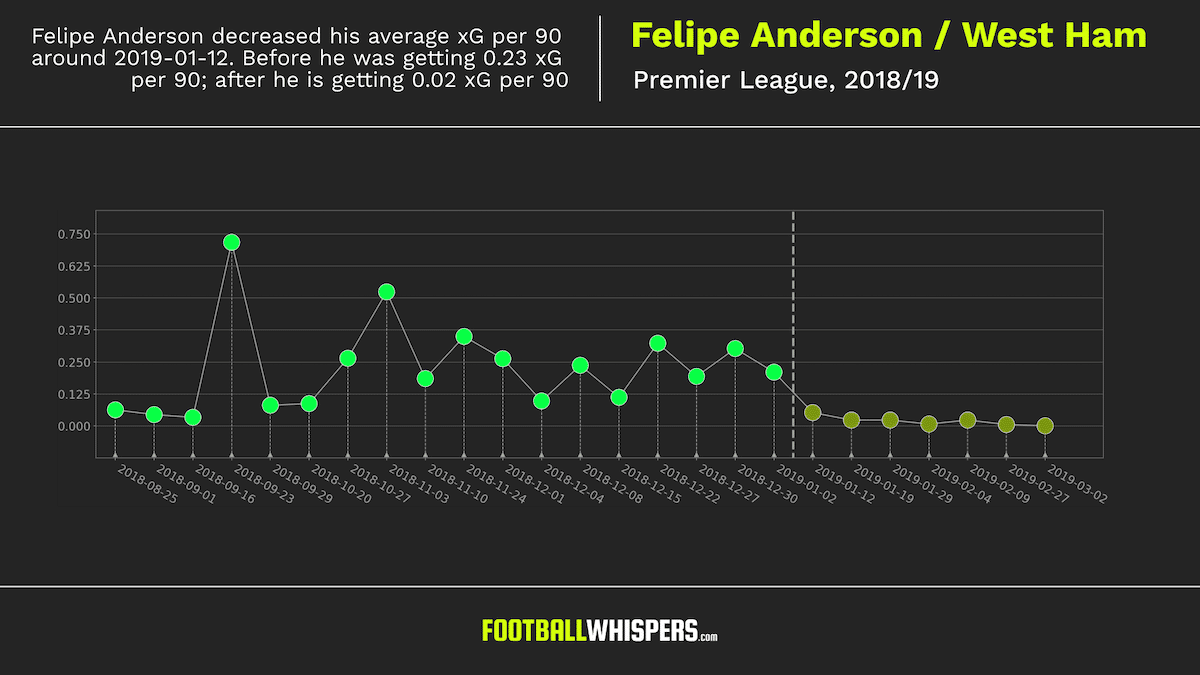 Anderson needs help, so step forward Lanzini. Recently, Pellegrini has alternated between a 4-2-3-1 and a 4-1-4-1. The latter was used effectively in their most recent outing, beating Newcastle United 2-0. Declan Rice, the deepest midfielder, was outstanding but it would have been encouraging, from a Hammers perspective, to see Lanzini complete 90 minutes for the first time in ten months.

The 26-year-old was influential, too, slotting seamlessly into his central role alongside Mark Noble. Lanzini completed more accurate passes than any other player on the pitch – with 97 per cent accuracy – and while he didn't create a goalscoring chance, he added poise and elegance to the Hammers' play.

Lanzini shouldn't be judged on his assists. He can obviously create – having notched ten in the league over the last three seasons – but his ability to link play and weave in between challenges is just as important.

The Argentine's return is timely. With Nasri struggling and Anderson fading, West Ham are in need of a creative boost.

Four points off Wolves and Watford, Pellegrini's side still have hopes of finishing seventh, which would cap a satisfactory season after a turbulent 2017/18. And with Lanzini back at 100 per cent, they have an even better chance of achieving it.