With Chelsea unable to make any signings for the next 12 months, thoughts have turned to those forgotten men of Stamford Bridge and whether they can help beef up what will surely be Frank Lampard's squad next season.

If indeed it is Lampard who succeeds Maurizio Sarri – at this stage, it seems impossible anyone else would get the nod – the former Blues midfielder will bring Mason Mount and Fikayo Tomori with him from their season-long loan spells at Stamford Bridge.

But there are a clutch of senior players who will be wending their way back to SW6 this summer, including a man you'd be forgiven for forgetting was still registered to the West Londoners: Kurt (Happy) Zouma.

Still only 24, the centre-back has spent the last two seasons away on loan, proving himself once more after rupturing his anterior cruciate ligaments against Manchester United in February 2016, an injury which ruled him out for six months. 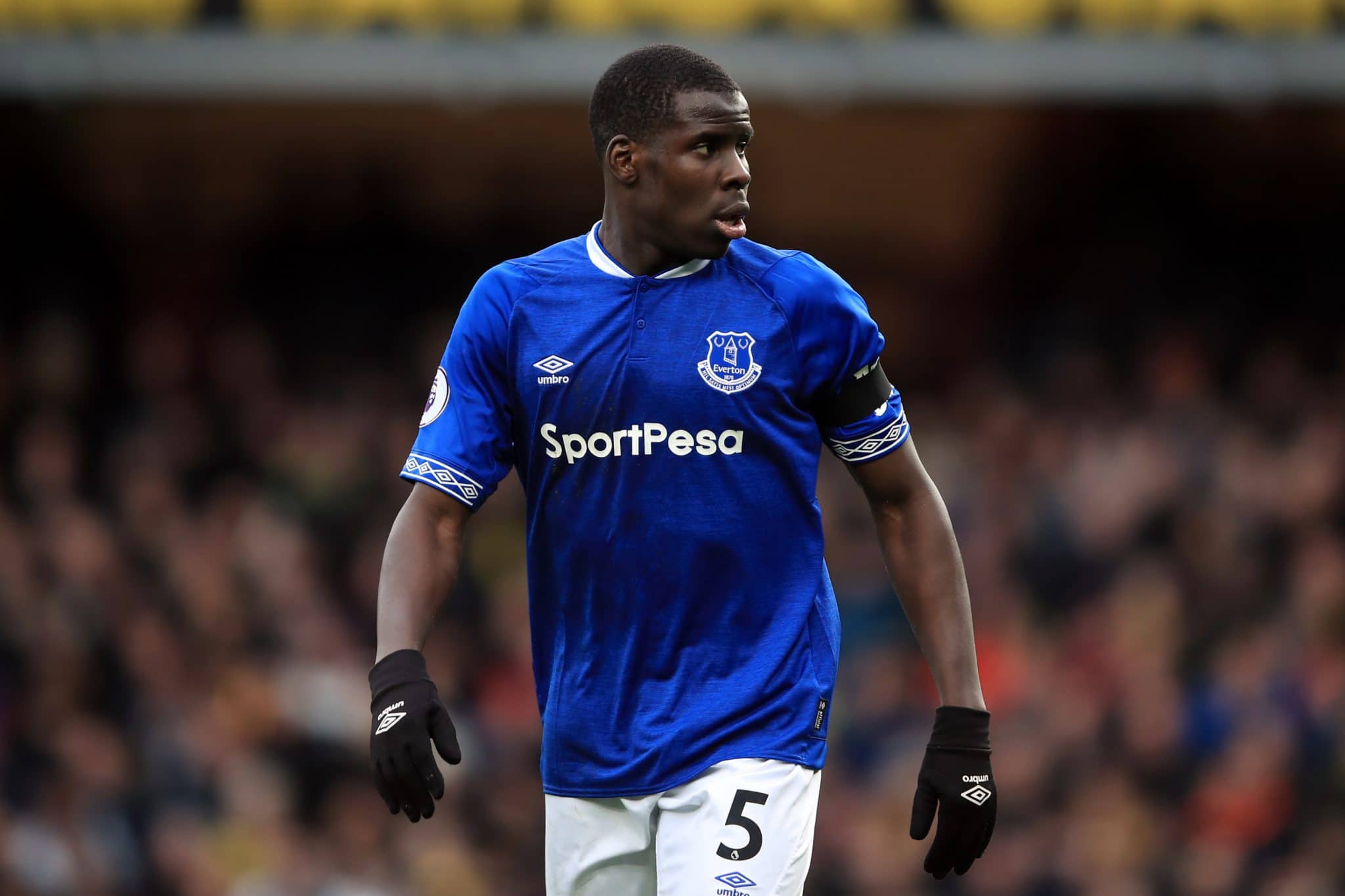 By the time he returned, Antonio Conte was in situ and Zouma did not fit into his back three with César Azpilicueta, Gary Cahill and David Luiz his preferred trio.

Chelsea's faith was cast-iron, though, and the Blues handed Zouma a six-year deal in July 2017 before he signed on loan at Stoke City for the season. Although Zouma played regularly, the Potters were relegated from the Premier League.

Last summer he was allowed to leave on a temporary basis once more, joining Everton as part of the Toffees' new-look defence under Marco Silva. Again he featured regularly and, after impressing at Goodison Park, the Merseysiders are keen to bring the Frenchman back on a permanent basis, according to BBC Sport.

However, any deal will have to be signed off by incoming Chelsea boss Lampard and he would do well to hang fire on giving Zouma the green light to leave for several reasons.

Firstly, that pesky transfer ban. Chelsea won't be able to sign anyone until next summer – Andreas Christensen as their senior central defensive options.

Rüdiger could miss the start of the campaign through injury while Christensen, who was so impressive during Conte's first season in England, has some ground to make up after falling out of favour in the last two seasons.

Youngsters Tomori and Ethan Ampadu – though his long-term future could be as a No.6 at the base of midfield – will bulk that number out but Zouma would slot in as one of the first-choice pool.

That pool, it's worth pointing out, could have been one fewer had Chelsea not backed down and given David Luiz a new two-year deal this summer, flying in the face of their notorious policy of only giving players over 30 one-year extensions. 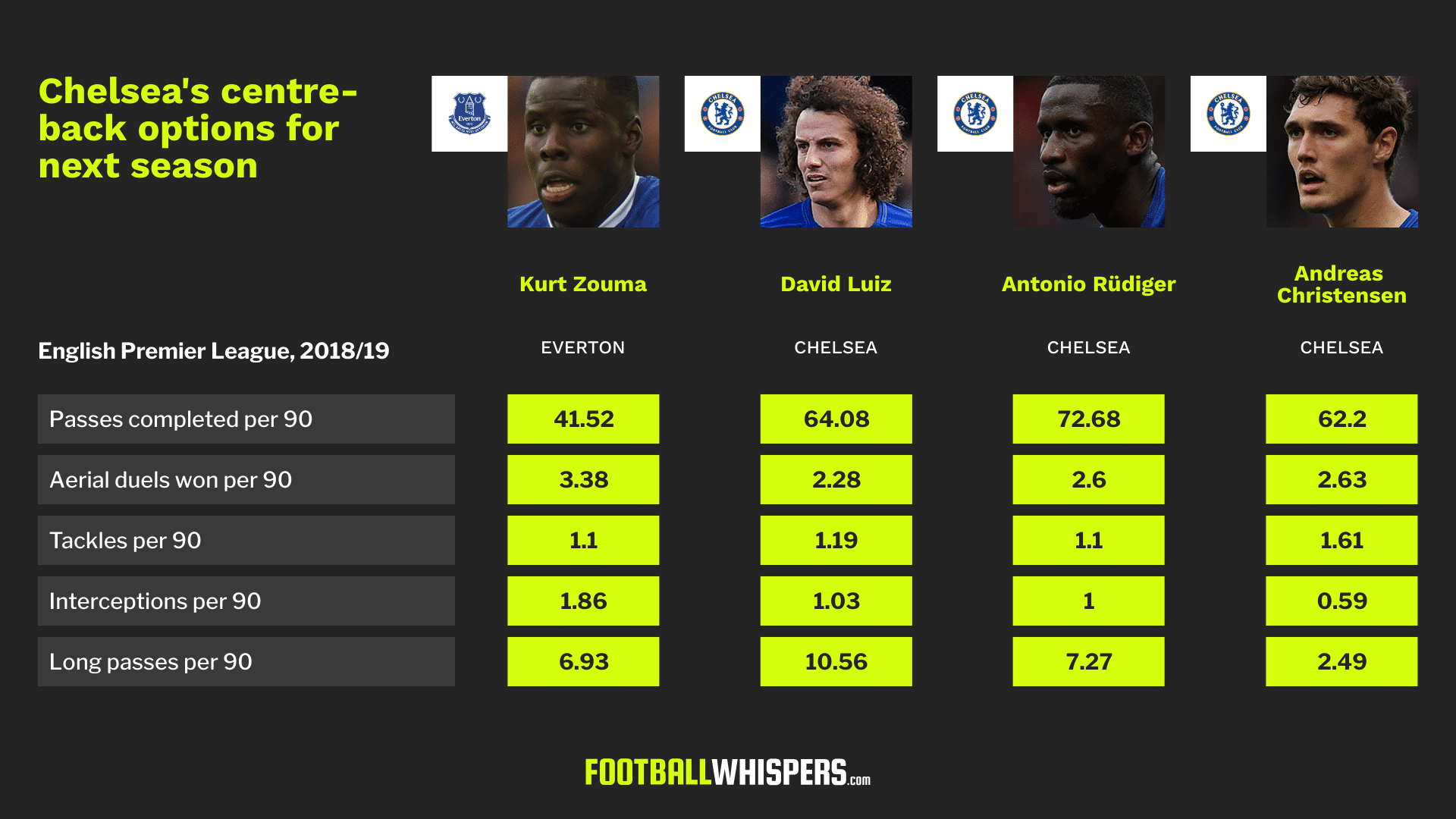 So how does Zouma compare to the three centre-backs currently on the Blues' books? Using data from the Football Whispers Lab, we can see how the 6ft 3in defender stacks up against his peers.

It's difficult to read too much into defensive statistics because a player at a big club will always be less involved than someone at a lesser club who is worked harder over the course of 90 minutes. To some extent that bears out in what we see in the graphic above.

Zouma won more aerial duels per 90 last season (3.38) than any of his Chelsea team-mates while his 1.1 tackle per 90 were not far behind Luiz and Christensen. He also dwarfed the others for interceptions (1.86 per 90).

But when you consider Chelsea kept the ball for an average of 15.55 seconds per possession, while the Toffees managed just 9.27 seconds, it's unsurprising. That is reflected in the number of shots the two sides conceded (9.18 for Chelsea vs. 10.68 for Everton) and their xG conceded totals of 39.86 and 49.82 respectively.

The real question is whether Chelsea believe Zouma is still the player he was when he broke into the Blues' first team in 2015/16, shining alongside John Terry.

While his positioning and concentration are questionable at times, Zouma has the recovery pace to get himself out of trouble more often than not. His imposing physique means he is, unsurprisingly, a dominant force in the air at either end of the field. On the ball, he is arguably better than he gets credit for with his long passing a particular strength.

But, at 24, and with almost 150 Premier League appearances to his name, Zouma is at a make-or-break stage of his career in West London. Another season out on loan will not benefit him or the club while he is too good to be parked on Chelsea's bench in case of emergency.

The decisive factor might just be the appointment of Lampard.

While the pair's paths never crossed at Stamford Bridge – Zouma signed the same summer the legendary midfielder exited for Manchester City – the incoming boss is expected to put his faith in the club's young players.

In some areas of the pitch he simply won't have a choice and, while centre-back is not one of those, a return to the Champions League means he will have to rotate from time to time.

His ability is not in doubt, the question now is whether Lampard will make Zouma Happy and resurrect his Chelsea career.