With four goals and an assist in his last four Premier League appearances – averaging direct involvement in a goal every 29.6 minutes –Érik Lamela.

The Argentine was close to becoming the forgotten man of White Hart Lane after a period of 13 months where a hip injury prevented him from making a single appearance as four of the aforementioned offensive quintet all prospered.

Lamela remains on the margins to an extent, as he’s yet to start a league game this season with his time on the field just 23 minutes per appearance, but such as been his impact whenever he’s played, he’s presenting a pretty conclusive case for Mauricio Pochettino to include him.

The issue for his countryman is exactly where and who to drop. Lamela did start the Champions League tie against Internazionale at San Siro, at the expense of Lucas, but the weekend trip to the Amex Stadium saw the Brazilian return to the right flank against Brighton.

Lamela emerged in the 76th minute and started and finished the move that put Tottenham 2-0 up with exactly the sort of dynamism Spurs have lacked at times this season; playing on the front foot, forcing the issue with a purposeful dribble and pass out wide before continuing his run and finishing inside the area with a smart first-time effort.

With Alli now fit again it presents Pochettino with a conundrum, a welcome one as competition for places will never be a negative. But the issue for the Argentine is his trusty lieutenants and the individuals who have been so integral to his vision of Spurs – Alli, Kane and Eriksen – are the ones out of form. Those demanding starts are the players supposed to be their deputies.

And after Lucas’ bright start to the campaign, it’s Lamela now demanding inclusion from the start, however effective he may be as a 20-minute super sub.

With the 26-year-old on the field (yes, he’s still only 26), Tottenham look more dynamic, play with a quicker tempo and his overall energy appears infectious to those around him. Lamela has long been criticised for inconsistency but it’s an almost impossible judgement to make in 2018 due to his lack of consistent minutes.

His suitability as a starter therefore cannot be properly analysed until he has a run of games in the first XI.

What is definite is the impact he’s made this season and although it’s restricted to a tiny sample size of 70 minutes, if it’s extrapolated across per 90 averages, it’s quite remarkable: Lamela’s xG is 0.98, his xA 0.41, his touches in the opposition penalty area a Messi-esque 18.26 and his scoring attempts at Ronaldo levels of 9.13.

It’s silly to place too much emphasis on these numbers in a wider context but what is clear is that Lamela couldn’t do much more in sticking his hand up to Pochettino and demanding he’s installed in the starting XI for the Premier League.

If his manager has taken notice, the issue is where. It’s clear Kane cannot or won’t be dropped or rested and Eriksen’s importance in the overall attacking scheme is too great to move the Dane to the bench.

It’s unclear how fit Alli is after his return but he’s an eternal favourite of Pochettino which, in a 4-2-3-1, leaves one place for Lucas, Son and Lamela. As it stands right now, the Argentine should be at the front of that queue, but in reality he’s probably at the back of it. 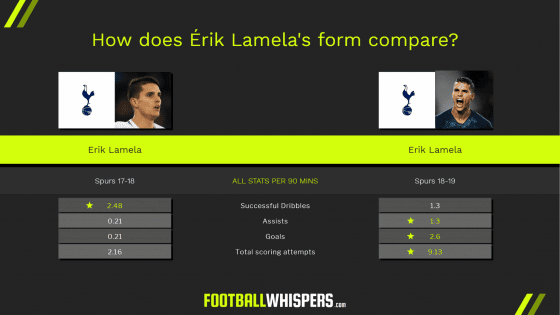 He can play across any one of three attacking midfield roles so it’s not as if he lacks flexibility in selection. He can stay wide and isolate full-backs 1v1, or drift inside as an auxiliary playmaker alongside Eriksen. While, although not the most natural of defensive players, he presses relentlessly, so it’s not as if he betrays the Pochettino’s playbook.

If he doesn’t make the XI for the trip to Huddersfield, it’s unlikely the situation will change without injury to Eriksen or Alli. Which then prompts questions over his long-term future, given a footballer that talented can only sit on the bench for so long.

David Neres is among Pochettino’s targets for January or summer, 2019. However credible and whatever the probability of the 21-year-old Brazilian moving to north London, it’s another doubt surrounding Lamela’s future.

Pochettino’s quotes post-Brighton didn’t exactly speak of a manager about to hand the keys over to Lamela as he said: “Sometimes I have some vision, but never appears that Lamela is going to be or have the best season in the club after five years. I don't know, I don't know. Many things can happen.

“Yes, I hope that he feels well and can add his quality every time that we demand his quality. Today I am happy for him because it was a great goal. He finished an action that was fantastic from the team and that's why I am so happy.”

It’s easy to hyper-analyse what are a largely bland set of quotes but it’s either a sign of pessimism over Lamela’s consistency, and therefore he’ll remain a substitute, or it’s some kind of kidology and a challenge for the midfielder to take his chance.

As an option off the bench, it’s a potent weapon for Pochettino to have and although Kane may be something of an isolated figure in striking terms, the choices behind him in creative attacking roles are plentiful.

The problem is, keeping Lamela in that role will only have a limited shelf-life and, sooner or later, he’ll begin to tire of it and could, at best, become disinterested and suffer that loss of focus or determination that Pochettino has alluded to or, at worst, seek a transfer away from the club.

Given what he possesses and what he can provide Tottenham, that seems a great shame and, ultimately, a terrible waste.