Just a few weeks ago the squad looked thread bare and it appeared as though Liverpool had failed to fully utilise the summer transfer window. Sadio Mané and Philippe Coutinho joined Lallana in the treatment room while Alex Oxlade-Chamberlain still was not up to speed with the intricacies of the Liverpool tactics following his deadline day move to Anfield.

But now the trio are back from injury and the former Arsenal man has found his rhythm in red, just in time for a busy festive period which sees Klopp’s men play 18 matches in 43 days.

And while it’s never a bad thing to have depth, the more options you have the harder it sometimes is to get it right – it can all be slightly overwhelming. Klopp has big decisions to make as he attempts to juggle his team, keep players fresh and ensure the Reds are at least within touching distance of the top four going into the new year.

It's not as straightforward as it once might have been, though. The new formation Klopp has used over recent weeks, coupled with players hitting a good run of form, has further complicated things.

Liverpool have slowly morphed from a 4-3-3 shape into more of a 4-4-2 shape, at least on paper. However, it's much more complex than that with the right sided midfielder, which has been Oxlade-Chamberlain or James Milner in the previous two matches, having to operate as a centre-midfielder in a three man midfield on occasion.

It means whoever is deployed in that role needs to have the flexibility to almost play one and a half positions.

Klopp opted for Milner's workmanlike strengths for the 3-0 win over Huddersfield Town but preferred Oxlade-Chamberlain's pace for the 4-1 win over West Ham United, with the Reds blitzing the Hammers on the counter-attack throughout.

It's clear he's going with a horses for courses approach, and that Lallana will be battling it out with those two players for a place in Klopp's XI. But why could he be the one size fits all solution?

Lallana blends the strengths of Milner and Oxlade-Chamberlain, kind of, but with added goals. 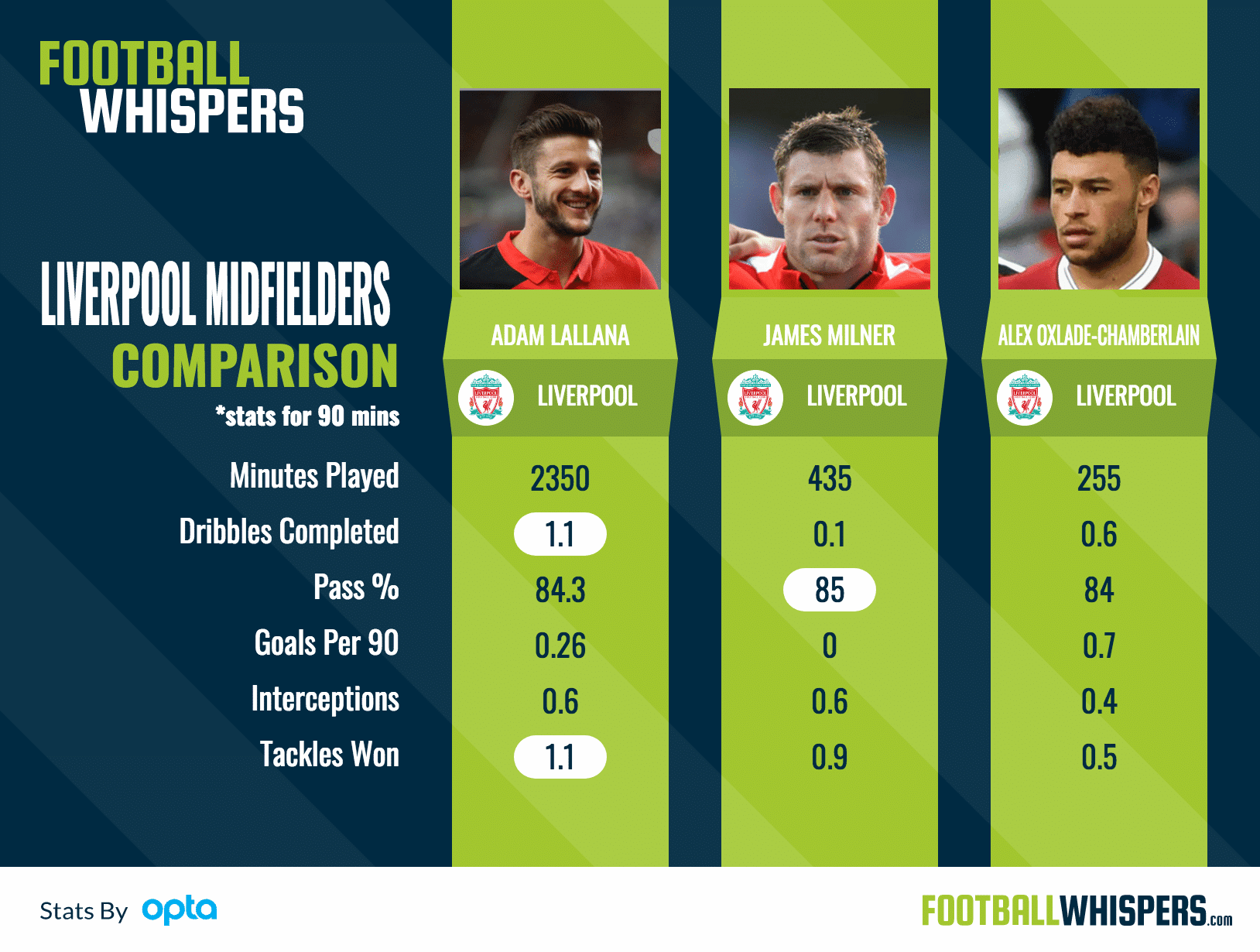 Though he's not as electric as the former Arsenal man he is quicker than Milner and was part of some memorable counter-attacking goals scored under Klopp. He's industrious in the middle third and diligent when it comes to his defensive duties. He can cross the ball on either foot – just watch the ball he puts in for the Gini Wijnaldum goal against Manchester City last season –  if he's asked to even though it's not something he prefers to do, or even likes doing.

He can break the lines both with and without the ball. He's more famed for his slaloming runs but not only can he spot a potential pass, he's able to execute it which then gets Liverpool into areas they can exploit.

Furthermore, he brings an energy to the team that they can't replicate in his absence. His pressing technique could sometimes be compared to that of a headless chicken but the majority of the time he's one of the key cogs in the Liverpool press.

Last season he played, and excelled, in a midfield three. However, he often found himself in an advanced position whenever Liverpool had possession of the ball, transforming the attacking three into a quartet. At times he was almost playing as a No.10 and it's a role he'd operate in if he was deployed on the right of the midfield four in the new look system. 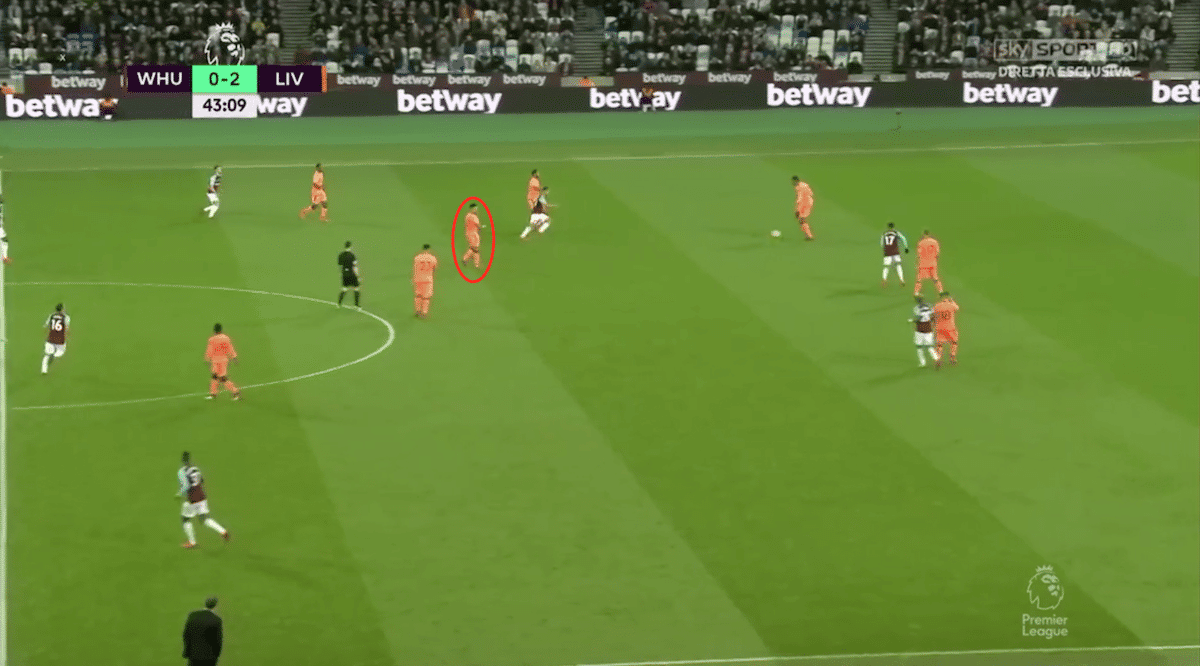 In the picture above you see Oxlade-Chamberlain, circled in red, in a deeper role. If you looked at that picture in isolation you wouldn't realise he was playing as a right midfielder and it's because the system is fluid and flexible. It allows the players to drift into a number of different areas to have an impact on the game.

Lallana found himself in a similar position countless times last season before he'd turn to face the oppositions goal, go through the gears and get Liverpool onto the attack. Just because he'd be starting on the right-hand side doesn't mean he wouldn't be able to do that again.

Likewise in the above picture, Oxlade-Chamberlain has drifted into a central area with Mohamed Salah occupying the space on the right hand side. It's intelligent on the ex-Arsenal player's part to position himself between the lines as he does.  Lallana takes up similar positions and, as things stand, he's much more dangerous there than the Liverpool No.21.

Unlike some systems, Klopp isn't tasking his wide players with being traditional wingers meaning it doesn't matter that Lallana isn't the quickest or the most dynamic in wide areas. It's what he does when in more central positions that he'll be judged on and it's where he delivers.

The 29-year-old seems ideally suited to the new system and his flexibility means the Reds will be able to make in-game changes without needing to use substitutes.