Like many Liverpool players past and present, Adam Lallana has been a divisive character since his move north. When he made the switch from Southampton in the summer of 2014 the £25million fee the Reds parted with was the first point to cause a rift between fans.

The attacking midfielder had enjoyed a successful campaign with the Saints, involving himself in 14 goals and starting 37 matches in the top flight. But the price tag made him one of Liverpool’s most expensive signings ever at the time. There was no history of consistency either as, despite being 26, it was his debut season in the Premier League.

For context, Roberto Firmino was available that same summer while Antoine Griezmann moved from Real Sociedad to Atlético Madrid in a deal reported to be in the region of £24million. The hot topic was whether the Lallana money coukd have been better spent elsewhere.

Next up for debate was his contribution to the team. His first season at Anfield saw him involved in eight goals in the Premier League in 1,792 minutes. A goal or an assist every 224 minutes was forgiven by most. It was a transitional campaign for the Reds and injuries acted as speed bumps in what should have been a smooth bedding in period.

The 2015/16 season saw Lallana’s goal involvement improve (213 minutes) but so did his minutes on the pitch. He finished with four goals and six assists.

Liverpool weren’t at their free-scoring best under Brendan Rodgers that season. But a return of four goals from an attacking midfielder isn’t the best, especially not for a player supposedly coming into the prime of his career.

The pro-Lallana fans believed what he brought to the team couldn’t be quantified. There’s no doubting the England international’s high intensity and work off the ball benefited the team but, as simplistic as it sounds, a player in the front three needs to be a goal threat.

The former Southampton man started the 2016/17 campaign with a point to prove. Deployed in a box-to-box role, he was involved in 14 goals before the turn of the year. His output now matched his work rate and the £25million Liverpool paid for him appeared to be a bargain.

However, from January to May he added a single goal to his tally. Injuries and having to play different roles to cover for others hindered him. His purple patch was over but he still finished the season having been involved in a goal every 156 minutes. But his inconsistency was one of the reasons he was seen as someone the Reds could upgrade on.

Can Klopp rely on Lallana?

Whether he's good enough is a subject still debated on a weekly basis. Reliability and quality are two separate issues, though, and it's the former that should take precedence. After all, Jürgen Klopp's system is built on sustainability.

How is the Stuttgart-born boss supposed to build when one of his supposed foundations is rotting? This is the problem he has with the 29-year-old, who many believed was a key part of Klopp's interchangeable 4-3-3 shape. The Liverpool manager implied it was Lallana's return to fitness that stopped him rushing out and spending the Philippe Coutinho money after the Brazilian left for Barcelona.

While that might have been the plan, it's not come to fruition. Since the Liverpool No.10 departed, Lallana has played just 220 minutes, with 90 of those coming against FC Porto in the second-leg of their Champions League last-16 tie.

It was always a risk.

And now the former Southampton captain's season appears to be over before it really got started. He hobbled off just three minutes after coming on against Crystal Palace on Saturday and the reports afterwards suggest it’s another hamstring strain. The cameo at Selhurst Park was his tenth appearance off the bench in the Premier League having started just once all season.

According to Transfermrket, since his arrival on Merseyside Lallana has missed 49 matches directly because of injuries – a number of which have been muscular problems; the last two have been hamstring related. 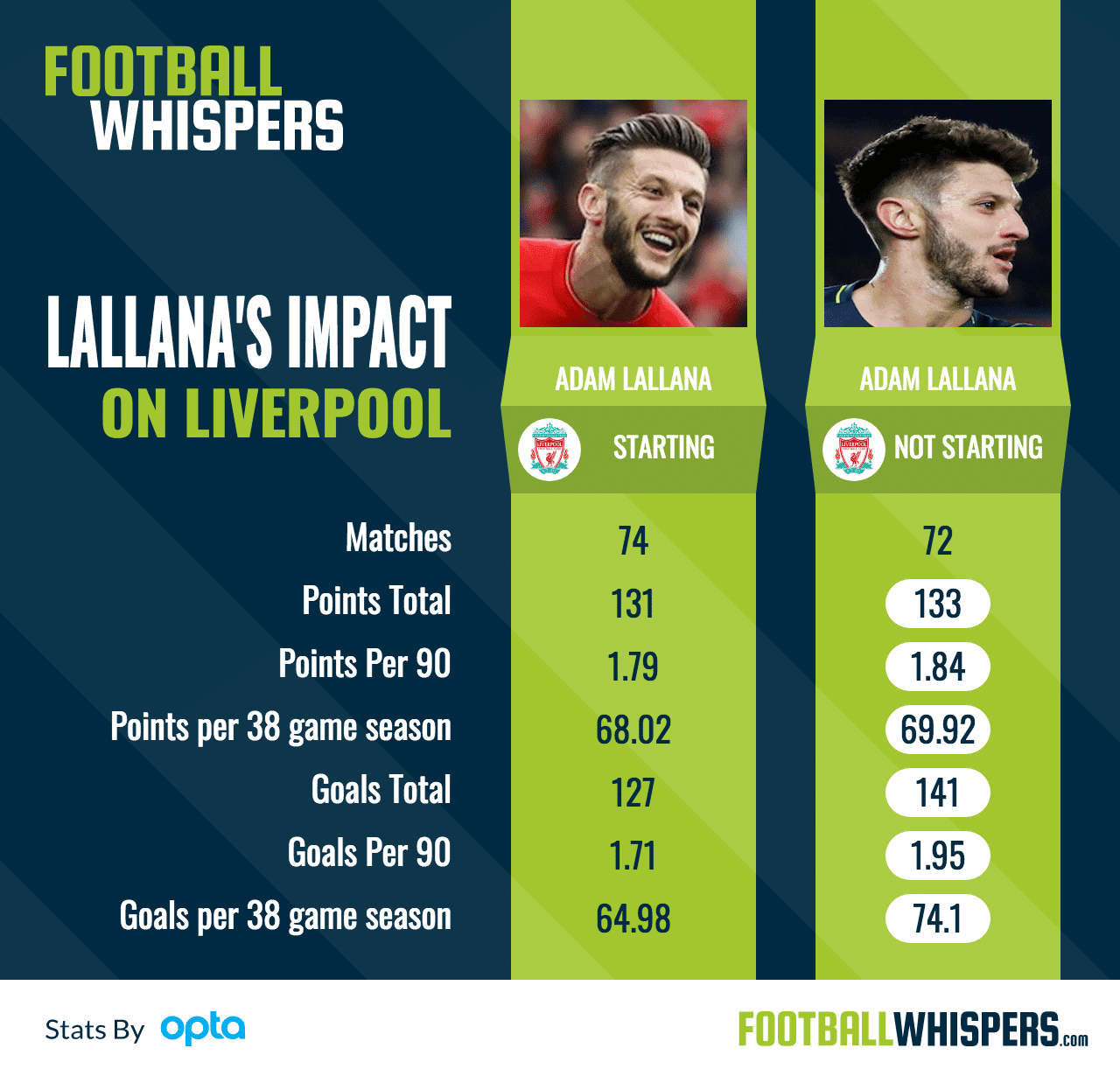 However, the bigger picture is even more alarming. The Premier League minutes available since the summer of 2014 is roughly 13,200 – Lallana's featured in just 6,470 of these meaning he's missed minutes equating to 76 full matches.

Not all of these absences are injury related, with Rodgers and Klopp sometimes rotating players, but it still means Lallana's missed two seasons of Premier League action and this is only his fourth term with the club. Jordan Henderson and Daniel Sturridge get a hard time from fans but compared to Lallana they're matching James Milner's levels of durability.

The Liverpool boss sounded as frustrated as the player looked as he made his way off the pitch following the 2-1 win over Crystal Palace: “It’s absolutely bad. We don’t know exactly what he has, but in the first moment and then I saw him going down it looked really serious, to be honest,” Klopp said.

“He’s our friend, our boy, our mate, our player having a difficult season already. Maybe one of the biggest achievements of the team is that they could play a season so far like they played without Adam Lallana – I never would have thought it was possible. So we are all desperately waiting for him and now coming step-by-step back and now… it’s a big, big blow for us today.”

Can his body cope with the demands of being a dynamic box-to-box midfielder in Klopp's system? That's the elephant in the room right now and one that needs to be addressed. There's a big decision to be made about his future.

In February 2017 Lallana extended his Anfield stay until 2020, a deal which made him one of the highest earners at the club. This summer represents Liverpool's last chance to get a big fee for him. Otherwise they will have to offer him a new deal or worth losing him on the cheap at the end of next season.

He might have been a key player for Klopp initially but can the same still be said? He was, in a sense, unique and his flexibility added to his appeal. But with the arrival of Alex Oxlade-Chamberlain and Naby Keïta joining in the summer, Lallana's now one of a few.

Furthermore, he's looked off the pace when on the pitch this season. It's understandable with him still finding his feet after a series of injuries, but what if the team has moved on without him? Oxlade-Chamberlain's been involved in a goal every 168 minutes in the Premier League since his arrival and that while playing a number of roles.

In the world of football, teams can’t afford to stand still, not when they’re vying for a place in the top four. The game is perpetually evolving and players get left behind.  There's no room for sentiment and Klopp will have to be ruthless.