After weeks of speculation linking him with a move to Atletico Madrid, Alexandre Lacazette became an Arsenal player on 5 July.

The French hit-man signed a five-year contract with the Gunners after they agreed to pay Lyon a club-record £46.5million fee, not including add-ons, for the striker's services.

It comes as a bonus to those at the Emirates who spent a great deal of time courting the 25-year-old and his representatives.

Arsène Wenger's men missed out on a top four finish last season despite the best efforts towards the end of the campaign. How much of an impact would Lacazette have made on this Arsenal team had he joined last summer? Would his arrival have made a difference?

How Will Arsenal Line Up In 2017? | FWTV by FootballWhispers

Using Football Manager 2017 we moved the Frenchman to London and simulated two full seasons. The results are staggering.

Lacazette left his beloved Lyon in the summer of 2016 and joined the Gunners. Wenger, ever a traditionalist, stuck his compatriot on the left of a three behind the striker in a 4-2-3-1 formation. On the right was Alexis Sánchez, Mesut Özil occupied the number ten position and Olivier Giroud was the main man in attack.

The versatile player operated as a winger in his early years and played in that role for Lyon before transitioning to a central role.

He made 23 league appearances, scoring five goals in the process. He shared the position with the likes of Alex Iwobi and Theo Walcott. However, his second season in London wasn't as rewarding. Just the two appearances all season despite being relatively injury free throughout.

The reasons for this will become clear as you read on.

How did Arsenal perform?

Yes, you're reading this right.

Wenger's Arsenal not only won the league, they did it at a canter. Spurs were 14 points behind their North London rivals as the Gunners amassed an impressive 96 points having lost just twice throughout the entire domestic season. That's six more points than what the famous invincibles side managed in 2003/04.

They scored the most goals in the league (86) and conceded the fewest (24) as this well-balanced Arsenal side ran riot in the league.

The Gunners managed to retain their title but the 2017/18 season was a slog. Liverpool went into the final game of the season leading the Premier League knowing a win at home to Southampton would secure their first title in over 25 years.

True to form, the Saints spoiled the party and ran out as 2-1 victors while Arsenal beat Manchester City to complete an unlikely turnaround.

Not only did Sánchez stay at Arsenal, he signed a new five-year deal. The Chilean was influential in both title winning seasons, especially the first when he was involved in 29 goals in just 36 appearances.

In the league alone he scored 32 and assisted a further 19 in the two simulated seasons. A stunning return from the former Barcelona man. He was primarily used on the right side of the three behind the striker but filled in as the striker from time to time.

Like Sánchez, the German magician stayed at Arsenal and pulled the strings in what was an utterly dominant attack. The former Real Madrid playmaker recorded 28 assists and scored 19 over the two seasons. He averaged an assist every other game.

Arsenal reinforced their attack during the summer of 2016. To go along with the signing of Lacazette the club signed rumoured Liverpool target Luan, 16-year-old Václav Černý from Ajax and Eduardo Salvio arrived from Benfica in the January.

Luan was loaned to Borussia Dortmund to get first team minutes under his belt before returning and replacing Lacazette on the left of the attack. Černý made the move to Las Palmas.

This is it. This is when Arsenal showed the entire world they were a force to be reckoned with. They parted with £52million (potentially rising to £83million) to secure the services of Paulo Dybala, the heir to Lionel Messi, from Juventus.

The Argentine's debut campaign in England saw him involved in 31 goals (he found the back of the net 20 times and assisted another 11) as he started to repay the faith shown in him by Wenger. 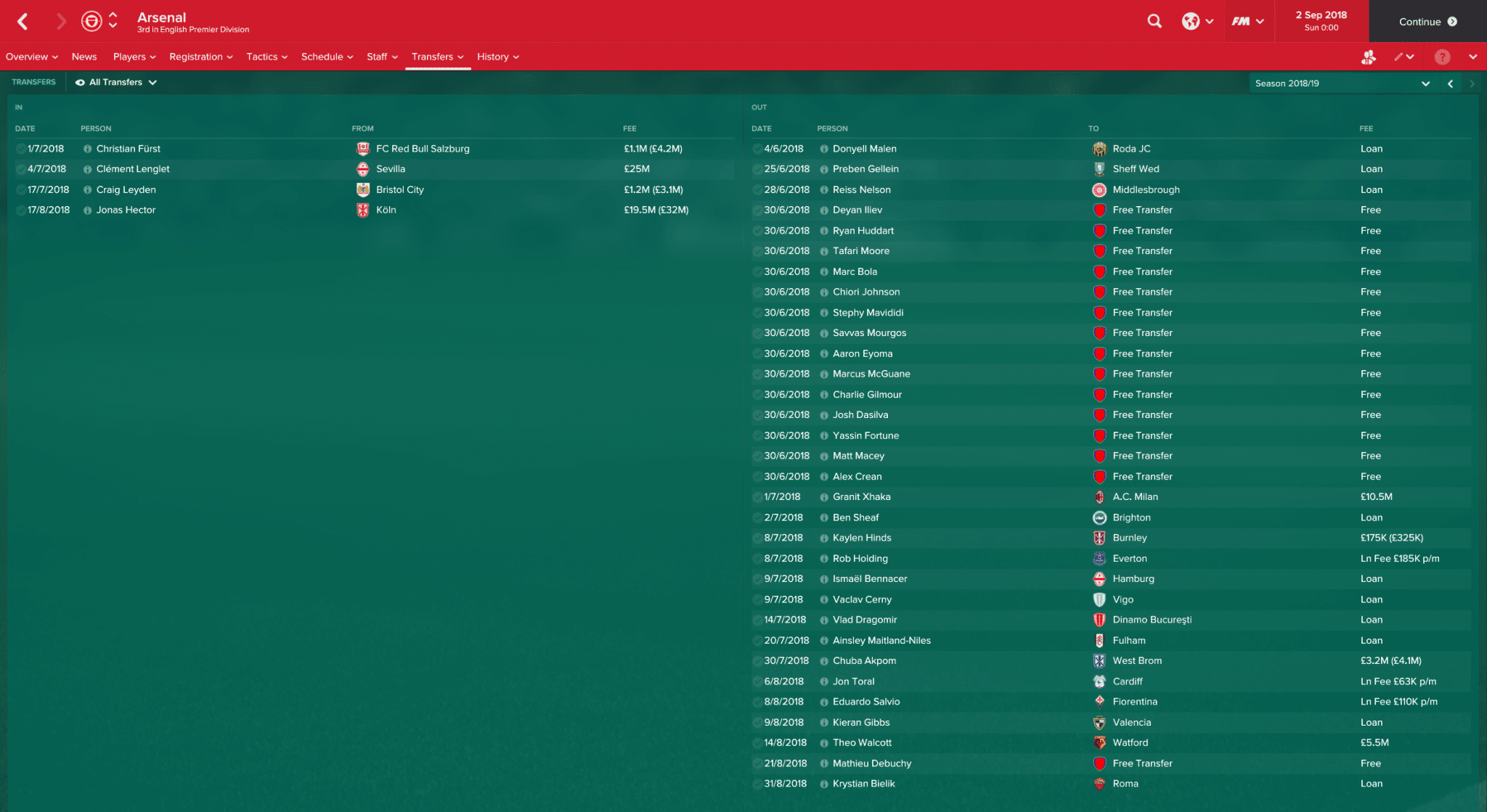 The summer after retaining their title they looked to add defensive signings. French centre-back Clément Lenglet arrived from Sevilla to replace compatriot Laurent Koscielny at the heart of the defence, and Jonas Hector, Koln's 28-year-old versatile full-back, was signed for a what could potentially be £32million.

Wenger left Arsenal in the summer of 2018 to take over as manager of the French national side. The 68-year-old went out on a high after winning back-to-back Premier League titles as well as an FA Cup. However, he failed to make any inroads in his quest for a Champions League medal.

During the 2016/17 season his Arsenal team fell to German opponents. Bayer Leverkusen ran out as 4-2 winners on aggregate with Kevin Volland netting a double in Germany to send the Gunners crashing out in the round of 16.

His departure from the Emirates saw the likes of Eddie Howe (then at Everton), Rudi Garcia (now at Lyon) and Marco Silva (managing Benfica) named as favourites but it was Carlo Ancelotti who took over the club. Ante Čačić replaced the Italian at Allianz Arena.

There you have it. Lacazette's arrival sparked Arsenal's reemergence as the best team in England, even if he didn't have much of an impact.