And two of the league's most expensive forwards, Romelu Lukaku and Alexandre Lacazette, have experienced the inexorable spectrum of emotions attached to the life of an elite-level striker.

Both players proved to be costly properties. Lukaku joined Manchester United from Everton for £75million while Lacazette cost Arsenal a club-record £52.7million, making for a combined value of £127.7million.

With hefty price-tags, the pressure on both players to perform was automatically intensified.

Now, with their respective debut campaigns coming to a close, it seems appropriate to compare Lukaku and Lacazette as the United and Arsenal prepare to face off at Old Trafford on Sunday.

Arsène Wenger is responsible for introducing some of the most exciting strikers the Premier League has ever seen. From Nicolas Anelka to Thierry Henry, the Frenchman possessed a keen eye for a player capable of stretching defences and, most importantly, finishing the flowing moves that have become synonymous with Wenger's time in England.

Lacazette was a different kind of experiment, a mega-money marquee acquisition who came with a reputation enhanced significantly thanks to scoring 37 goals in his final season at Lyon.

At 26, Lacazette was expected to be more rounded than Anelka and Henry, who were raw when Wenger signed them. Gifted, but raw.

Lacazette wasn't expected to blossom in the future, though: he was expected to supply the goals on a consistent basis from the outset.

He got off to a flyer, too, scoring after just 94 seconds of his debut against Leicester City. He scored in his next two games at the Emirates but there were also worryingly subdued displays against Stoke City and Chelsea.

When he struggled against the Blues only to shine against West Bromwich Albion, there were suspicions that Arsenal may have snapped up a flat-track bully.

Which is a label Lukaku has tried to shed at United. For too long, the Belgian has been classed as a striker who mercilessly picks off the smaller teams only to become conspicuously timid in the heavyweight clashes.

The 24-year-old found goals relatively easy to come by at the start of the season, but when he failed to shine against Liverpool, Tottenham Hotspur and Chelsea, the flat-track bully narrative reared its ugly head once more.

Although Lukaku was bright in the 3-1 victory over Arsenal at the Emirates in December, he didn't score. Performances are important but a £75million striker's progress will inevitably be measured by goals. 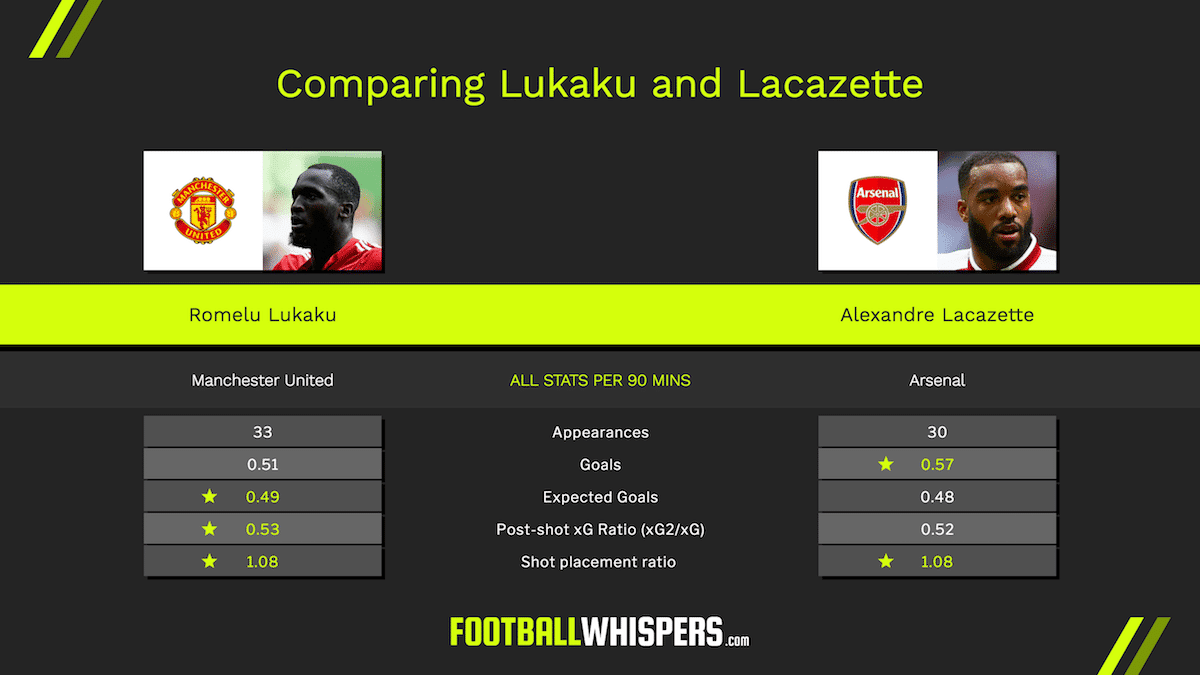 Then, when Lukaku plummeted to a crushing nadir against Manchester City, it threatened to derail his season. Culpable for both of City's goals while struggling to make an impact in the final third, Lukaku looked as though he wanted the ground to swallow him up.

A golden opportunity for the forward to assert himself on the big stage, Lukaku's first experience of the Manchester derby was a harrowing one.

Fortunately, he has continued to provide goals at a steady rate and struck his first for United against a top-six in the 2-1 win over Chelsea in February. In fact, with 27 goals in 49 appearances in all competitions, this is Lukaku's most prolific season, surpassing the 26 he managed at Everton in the previous campaign (albeit in 39 games for the Toffees).

Lukaku's output is certainly not to be sniffed at but has been made to look ordinary when pitted against the extraordinary exploits of Mohamed Salah, who, despite costing Liverpool around half of what United paid for Lukaku, has scored 43 in 47.

Lacazette has been more erratic. After scoring in the defeat to United in December, the Frenchman went nine games without a goal.

However, he's been hot since returning from his knee injury at the start of the month, netting seven in as many games including four in his last three so he is in the midst of his most productive spell in front of goal for the Gunners.

Comparing the two strikers statistically unearths a few interesting revelations. Lukaku's expected goals (xG) of 15.39 is comfortably higher than Lacazette's 10.92, while the Belgian's post-shot xG – a metric which measure only shots on target and takes placement into consideration – is 16.63 compared to the Arsenal forward's 11.85.

Intriguingly, Lacazette boasts a higher goals per 90 average of 0.57 to Lukaku's 0.51, and also averages significantly more touches in the opposition's penalty area, with 7.99 to the United man's 4.91.

Of course, Lacazette's style is different to Lukaku's. Whereas the Belgian often drops deeper to receive possession, Lacazette's game is built more on sharp movements in tight spaces. Lukaku can dominate aerial battles but Lacazette is more likely to slide into pockets of space and try to unhinge defenders with his feet.

With Lacazette fully fit and firing, it would be a shame if he were to be rested for the United game with the trip to Atlético Madrid to come next week.

Even if he doesn't play, however, his first season with the Gunners draws some parallels to Lukaku's experience at United. Both were high-profile summer signings expected to produce excellent numbers and have largely delivered, with a few bumps along the way.

Yet, although both Lukaku and Lacazette have proven themselves as first-choice strikers, Arsenal signed Pierre-Emerick Aubameyang in January while Alexis Sánchez was bought to add more firepower to United's ranks.

Come next season, both players will be under pressure. While Lukaku will want to deliver more in the big games, Lacazette will have to adjust to a new manager, which may mean a radical change in Arsenal's style of play.