Just 12 months ago, Krzysztof Piątek was one of the most in-demand players in Europe.

His goalscoring exploits for Genoa meant the Serie A side were reportedly fielding calls from Milan, Chelsea and Real Madrid just six months after signing the Poland international for €4million.

Now, Milan are reportedly prepared to sell the 24-year-old for a loss. The Rossoneri parted with €35million to secure his services in January 2019, even cutting short Gonzalo Higuaín’s loan spell at San Siro to make room for him.

But after netting just 13 times in 36 Serie A appearances, those in charge of recruitment at San Siro are looking at ways to recoup as much as possible for the former Cracovia forward.

Fortunately for them, there is interest in Piątek. Reports in England claim Crystal Palace, Newcastle United Aston Villa and Tottenham Hotspur are all weighing up a move for the Milan No.9. English and Italian outlets suggest a deal in the region of £25million would be enough to land the ten-cap Poland international.

Last season, such a fee would’ve been a bargain for Piątek. Now there are reservations over whether such a move would make business sense. In the space of a year, he went from being viewed by many as one of the best strikers in Italy – perhaps even in Europe – to someone viewed as a gamble for the price of a Premier League squad player.

The question is whether this is just a bad patch or his true level. Was Piątek's hot streak prior to his move to Milan nothing more than a purple patch?

For the first half of the 2018/19 campaign, Piątek averaged 0.73 goals per 90. He was running hot, really hot, with his expected goals average coming in at 0.42. His post-shot expected goals average, a stat which looks at where the shot was taken from and where it lands on target, showed him to be fairly consistent with his finishing. Such reliability leads to overperformance – exactly what happened. 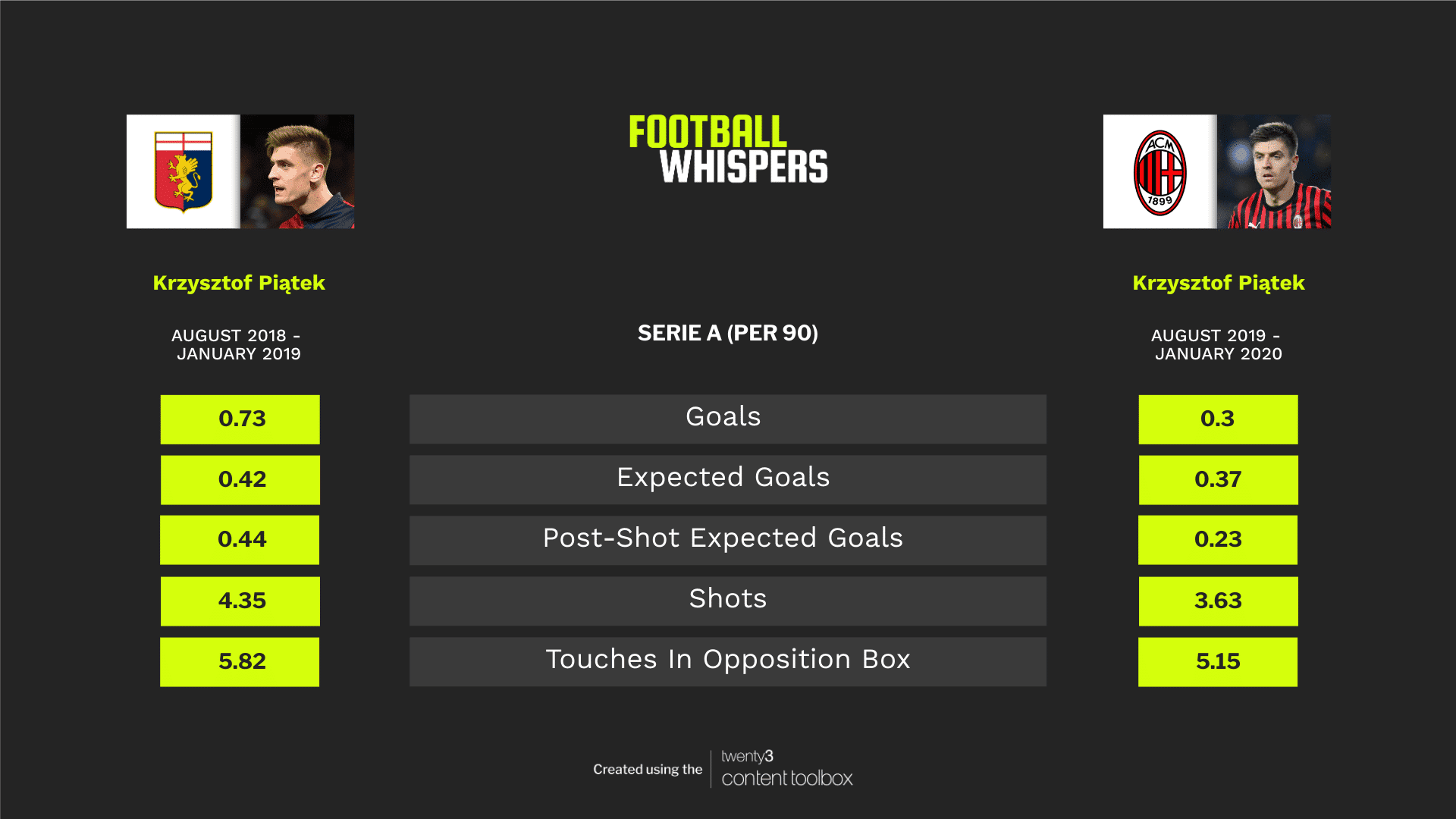 At Genoa, the team was geared towards creating opportunities for their summer signing, which explains why he was averaging more than four shots per 90. It also goes some way to painting a picture of Piątek. By no means clinical, he relied on volume to be at his effective best.

When comparing the same stats to the start of this season, it becomes clear why he’s only scored four goals. Of those four goals, three have come from the penalty spot. At this stage of the campaign last year, Piątek had 13 to his name.

At first glance, it may appear as though Milan have somehow nullified their biggest threat. But Piątek's expected goals per 90 average isn’t that far off what it was for Genoa. The biggest difference is in his post-shot expected goals numbers.

This season, the Pole is underperforming. Instead of adding value to his efforts, he’s making his chances worse due to his finishing and his placement. This is explained in his post-shot expected goals difference of 0.21.

He’s also taking fewer shots this term. Now, a drop to 3.63 from 4.35 might not seem like so dramatic but, over the course of a season, that is a difference of almost 30 efforts on goal.

What we learn from looking at his Milan numbers is that they don’t play to his strengths. His confidence is shot and that is why his stock has fallen dramatically. Yet he’s still getting into dangerous areas on a regular basis – doubtless why clubs are showing an interest in him. If an attack is built around him, Piątek could soon rediscover his Genoa form.

He may be viewed as a gamble but goals are king in football and having a reliable threat in your team can be the difference-maker. Piątek's goals could fire Villa to safety, Spurs into the Champions League or Palace and Newcastle to mid-table safety.