“Life moves pretty fast. If you don't stop and look around once in a while, you could miss it.”

Just a few months ago, Piątek was finishing ninth in the Polish league with KS Cracovia. Now, though, having joined Genoa and started life in Italian football with a bang, the 23-year-old is being linked with Barcelona.

Piątek might want to stop, look around and savour the surroundings in northern Italy. Before he knows it – and before sub-editors have the chance to write out his name without Google's help – he may be off to greener pastures.

Recent events would certainly indicate as much. If Piątek is destined for a European giant, Genoa have reason to be a little disgruntled.

In a year which has seen them lose teenage sensation Pietro Pellegri to Monaco and Mattia Perin to Juventus, the last thing manager Davide Ballardini needs is another one of the club's prized assets dominating the Serie A transfer columns.

Then again, it is a measure of Genoa's ability to find/develop talent. Pellegri and Perin were both outstanding graduates from the Rossoblù academy. Piątek was scouted but, with clubs like Barcelona circling, Genoa can potentially expect another significant windfall.

Having struck 21 times in 38 games for Cracovia last season – a return which was enough to see him named in Poland's provisional World Cup squad and, considering their feeble showing in Russia, should have been enough for the final cut – Piątek has wasted no time picking up where he left off.

After a well-taken goal in a pre-season friendly against Swansea City, Piątek thought better of waiting until the start of the Serie A season before he started terrorising defences, scoring all four goals in the 4-0 cup win over Lecce.

The No.9 showcased his impressive aerial prowess against the second-tier side by scoring three headers (his other was an accomplished finish, latching onto a through ball before rounding the keeper).

Piątek was merciless, scoring four to crush Lecce inside of 38 minutes, giving the new signing a significant boost heading into the new season.

It took him a mere five minutes to open his Serie A account, too, in the 2-1 win over Empoli, instinctively finishing a Domenico Criscito cross from the left flank.

Although he scored twice next time out against Sassuolo, Genoa capitulated, conceding four goals in a disastrous 13-minute period prior to half-time, eventually losing 5-3. While the result was disappointing, Piątek's opening 180 minutes for Genoa have been anything but, suggesting, for the time being at least, that he is immune to the leap from Polish to Italian football.

In fact, with seven to his name, Piątek has already surpassed top scorer Gianluca Lapadula's tally of six for last season.

Being that he is a Polish striker who finds the net regularly, Piątek has already been compared – rather dubiously – to Robert Lewandowski. However, the in-form forward isn't just a carbon copy of his illustrious compatriot.

While Lewandowski has benefitted from being in peak condition to relish the physical side of the game, Piątek is more elusive, trusting his ability to find tiny pockets of space between defenders.

As you can see from his heatmap below, Piątek is a busy, roaming presence in attack. He has been considerably more active on the left flank, but that has been a result of lining up on the left of a two-pronged attack alongside Cristian Kouame in both games. 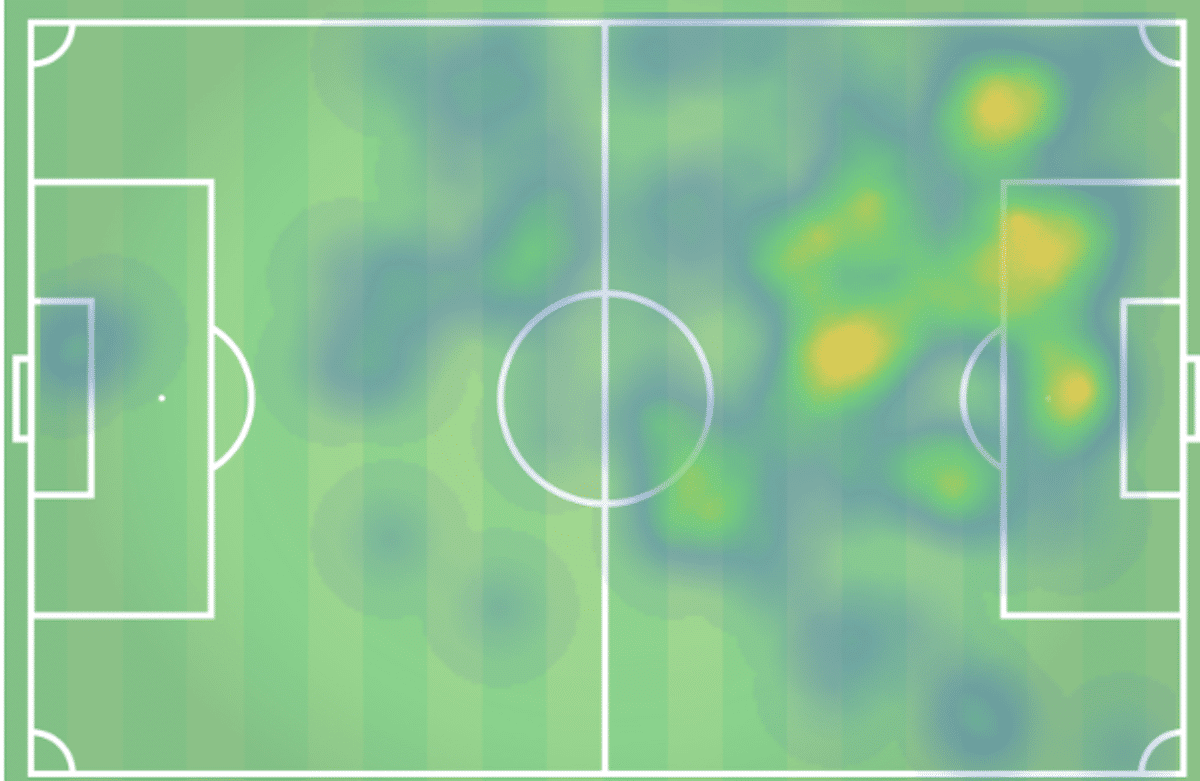 As illustrated above, he is willing to drop deep and link up the play and often drifts out left to pick up the ball from the full-back.

He is also a towering presence in the air, winning 2.5 of his 5.97 aerial duels per 90 minutes in Serie A so far. Piątek is also an astute reader of the game, having already made eight interceptions for his new side. The most impressive stat, though, is his shots on target; from four in the first two games, he's found the net three times.

Such ruthless efficiency is in stark contrast to the early-season fortunes of some of Serie A's more established marksmen.

While he missed out on the World Cup, new Poland head coach Jerzy Brzęczek selected the striker in his first squad for the upcoming UEFA Nations League opener against Italy, and friendly against the Republic of Ireland four days later.

As you can see from Football Whispers' Player Persona radar above, Piątek's style of play is heavily focused on goalscoring. He's not likely to be a prominent chance creator for Genoa this season but, find him in the box and, chances are, he'll finish the job off.

It's early days but reports that Barcelona are monitoring Piątek's progress in Italy is a striking barometer of the impression he's made in such a short space of time.

His current goals per 90 of 1.5 will certainly drop off dramatically as the season wears on but, if Piątek continues to lead the line with anywhere near the efficiency he's shown in the opening few weeks, he will almost certainly be the next high-profile departure from Genoa.

For now, anyway, he can revel in the fact that, while Cristiano Ronaldo, Mauro Icardi and Gonzalo Higuaín await their first Serie A goal this season, he is flying high at the Stadio Luigi Ferraris.