When Leicester City striker Jamie Vardy revealed his pre-match routine included drinking three cans of Red Bull there was uproar. On the flip side, Werder Bremen striker Max Kruse has benefitted from kicking his Nutella habit with improved form culminating in rumours of a move to Everton.

The 29-year-old German international is reportedly a Toffees transfer target after hitting 15 goals for the Bundesliga side this season.

The 2016/17 campaign has been the best of Kruse's career and it comes after he was told to cut back on his habit of eating Nutella for breakfast.

Kruse, who was a Wolfsburg player until last season, was told by club director Klaus Allofs he would have to improve his diet during the previous campaign's winter break.

“The aim is to support our players to deliver optimum performance,” Allofs said. “Max needs to correct a few things.”

And it appears Allofs knew best, even if Wolfsburg did not see the best of the German international as he returned to Werder last summer for a second spell.

Who is Max Kruse?

Kruse left die Werderaner in 2009 in search of regular football having failed to make an impact on the first team. He bounced between St Pauli, Freiburg, Borussia Mönchengladbach and Wolfsburg with mixed success before returning to Werder last summer.

Initially, he struggled to force his way into the thoughts of coach Alexander Nouri and was restricted to just three appearances before scoring his first Werder goal in a 2-1 win against Ingolstadt in December. He added to that the following weekend with the winner at Hertha Berlin.

But Kruse had to wait until the end of February for his next goal with strikes in consecutive weekends proving consolations in defeats to Bayern Munich and Augsburg.

But, just around the corner and out of the blue came the best month of Kruse's career. After scoring once in March the Reinbek native bagged eight goals in six matches throughout April.

It was as many as Barcelona's Lionel Messi managed that month and one more than Bayern's Robert Lewandowski. That number is enhanced somewhat by the four he notched in a single game against Ingolstadt but Kruse had finally made good on his promise.

He finished the 2016/17 campaign with 15 Bundesliga goals from just 23 starts and the equivalent of a goal every 136 minutes. It's why there is talk of a recall to the Germany squad for June's Confederations Cup in Russia. 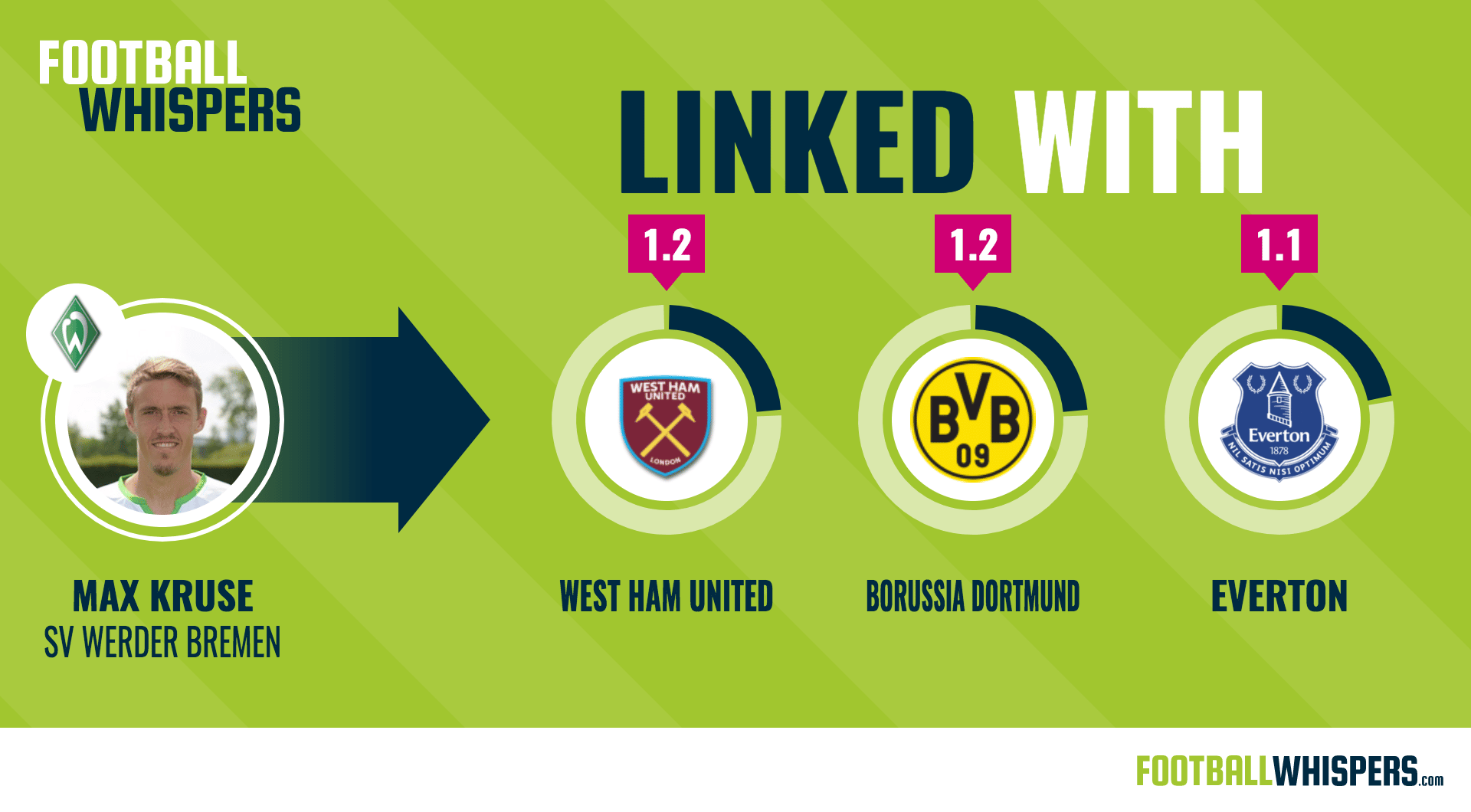 Löw has not always had words of encouragement for Kruse, however. In March last year he was reprimanded by Wolfsburg after leaving casino winnings of £59,000 in the back of a cab.

An additional fine of £20,000 rubbed salt in the wounds and Löw was left distinctly unimpressed by Kruse's actions.

“We need players who are focused on football and also understand their role as role models,” he said before banishing the forward from die Mannschaft's squad for their friendly with England.

“I talked with Max about what I expect from players on and off the pitch. His actions in the last weeks were unprofessional.”

There was also, as reported by Bild, an incident where Kruse was photographed in a nightclub by a woman at the venue. The striker, reportedly, tried to grab the phone on which the photos had been taken to delete them. 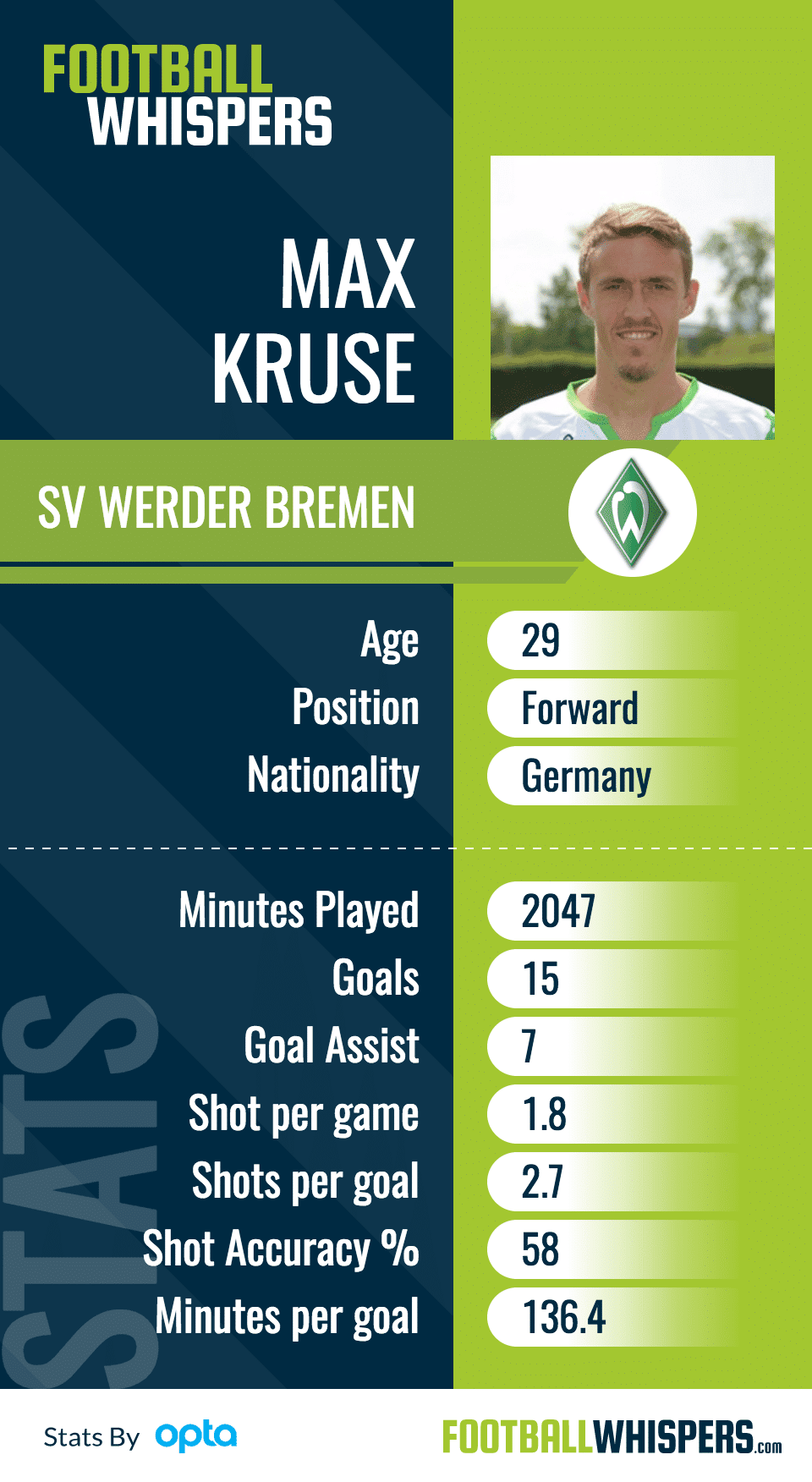 Is he worth the trouble?

Despite those issues there is a talented player in Kruse. His form for Werder Bremen, who finished eighth in the Bundesliga this season, suggests as much and if he can replicate that over a full season die Werderaner have a £25million-£30million forward on their hands.

For Everton a striker is a necessity this summer. Chelsea transfer target Romelu Lukaku will almost certainly leave Goodison Park, be it for London, Manchester United or abroad.

That means Ronald Koeman will have to sign a top-drawer striker, one capable of leading the line single-handedly, to take on the unenviable role of filling the big Belgian's boots.

Werder have been tactically flexible this season, playing with one or two strikers up front depending on the situation, though Kruse has tended to play with a partner – either Fin Bartels or Claudio Pizarro.

That could present an issue as Lukaku has been the focal point of the Toffees' attack since signing. Koeman switched to three at the back during 2016/17 and often played with two players – usually Tottenham transfer target Ross Barkley and Kevin Miralles – off of Lukaku.

In an ideal world Kruse would play in a two or off of the main striker, almost as a number ten. He is quick, intelligent and brings those around him into play – something Lukaku is not so strong at. The Belgian, typically, is the man who ends a move instead of instigating it.

In that sense he might actually take the place of Barkley if the England international leaves Goodison Park with contract negotiations at an impasse – just as long as he stays off the Nutella.