Despite keeping clean sheets in their last two games, West Ham United still have the joint worst defensive record in the Premier League.

They are level with Everton as the only sides who’ve conceded double figures in the division so far, with both letting in ten goals in five games – giving them an easy to work out average of two goals shipped per game.

However, the Hammers’ ten goals were all conceded during their first three games as Manchester United put four past them at Old Trafford on the opening day of the season before Southampton and Newcastle both managed three against them in their next two fixtures.

The Hammers had to play their opening three fixtures away from home due to the remnants of an athletics event which had been taking place at the London Stadium. But despite this early disadvantage, Slaven Bilić would still have expected his side to perform much better than they did.

Their return home and the introduction of a few key players has seen them pick up after this poor start, and the creation of a midfield partnership in front of their defence has been key to their upturn in fortunes.

In the two games Cheikhou Kouyaté has started, Bilić’s side haven’t conceded a goal, and this is as much down to his partnership with Pedro Obiang as it is his own individual strengths as a midfielder.

The Senegalese possesses many defensive strengths from his time playing as a centre back, mainly during his time at previous club Anderlecht, but also occasionally for West Ham.

Obiang, meanwhile, is a central midfielder who has also excelled in a defensive midfield role.

He has been at the club for three seasons and has two goals and two assists to his name in 65 appearances, but he’s there to make sure others are free to attack, and prevent the opposition from doing so.

The pair stand at an imposing height with Obiang measuring in at 6ft 1ins and Kouyaté towering above most midfielders at 6ft 4ins – again seeing his centre-back characteristics coming into play.

They both have decent passing accuracy of 83 per cent and this should improve if West Ham can put some wins together and increase in confidence in possession.

Of the pair, Kouyaté plays the slightly more attacking role while his Spanish partner tends to sit deeper. But they are very much a double pivot in front of the back three they played in front of in the last two games.

Their average positions from the game against Huddersfield, with Kouyate (No 8) just ahead of Obiang (14), show this perfectly. 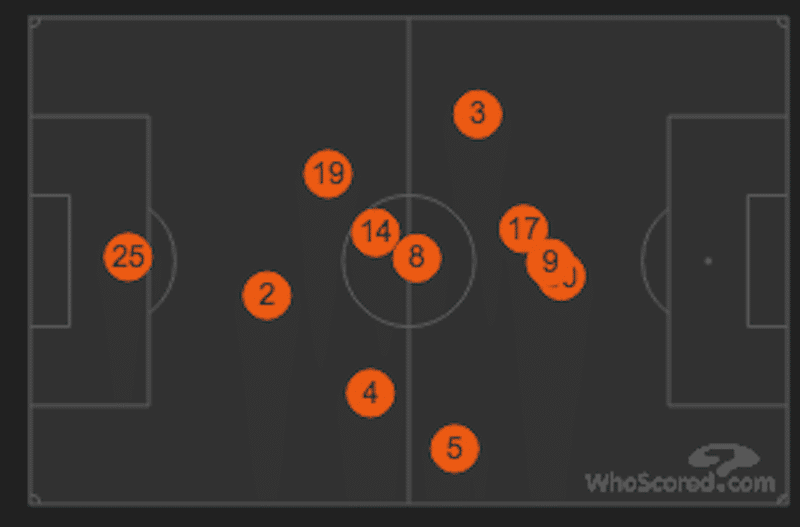 The Spaniard's deeper position sees him lead the team, and indeed the entire Premier League, when it comes to tackles per game, with 4.5.

Having only played two full games it will take a little while longer for his team-mate's statistics to begin showing trends, but they should eventually show good all round support defensively, aerially, and his passing accuracy should improve wants he gets more games under his belt.

The first set of screenshots below show Kouyaté's tendency to advance. While their roles may swap once in a while, and Obiang gets forward, the average positions and play such as this suggest it's the job of the former. 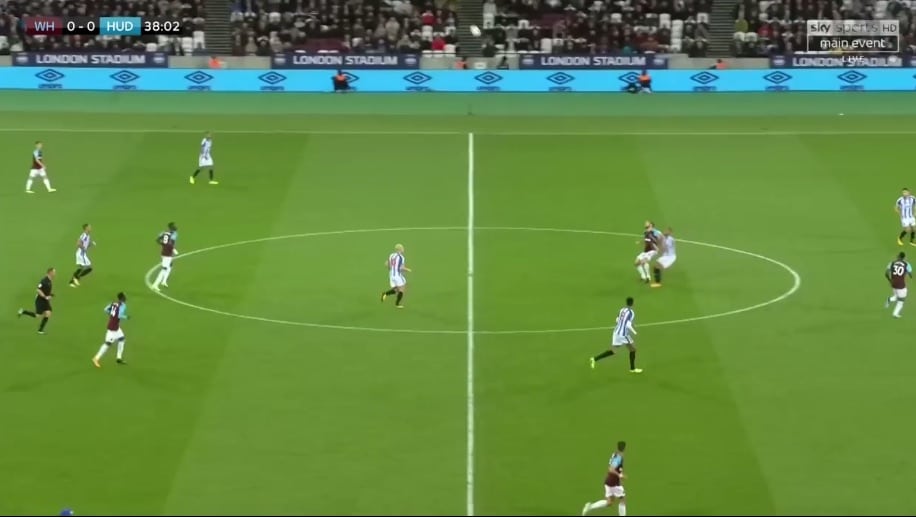 Andy Carroll is challenging for an aerial ball, which everyone watching the game knows he'll win, including Kouyaté, who springs from his position next to his midfield partner to pick up the ball. 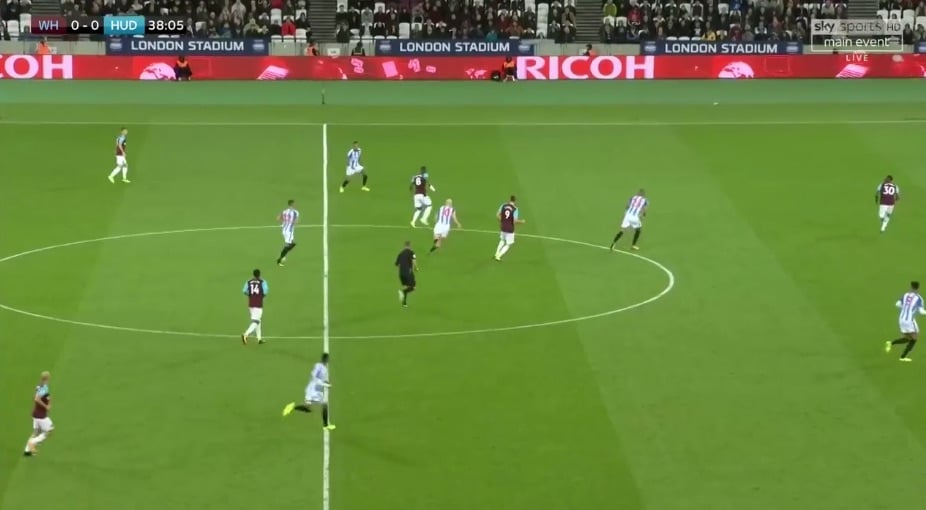 He manages to do so but makes a meal of his pass choosing to pass back to the left-back rather than forward to Michal Antonio (30) who'd made a good run down the left.

In defence they act as much more of a unit. In the next set of images Obiang wins a header in defence as Huddersfield play the ball in. 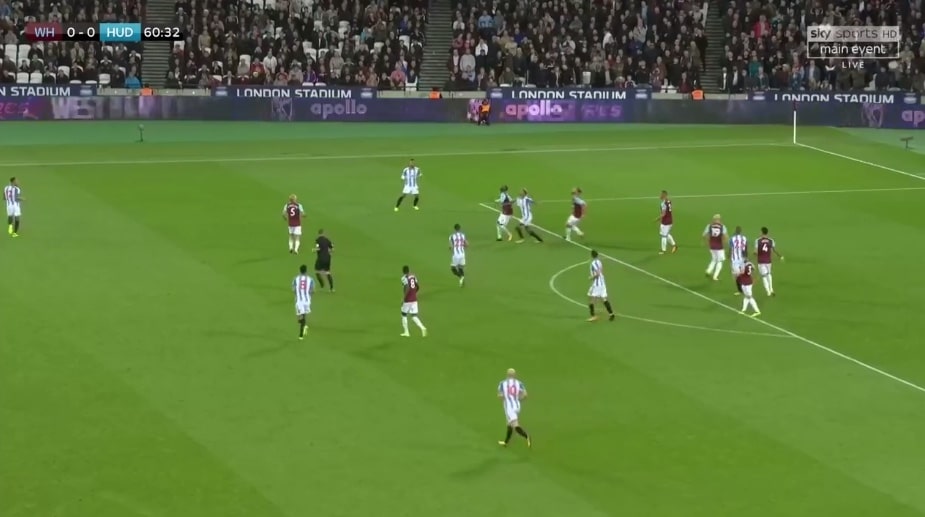 Obiang just about gets his head on it but his team-mate is on hand to clear the second ball before they return to their pairing in midfield for the next phase of play, once the ball is cleared. 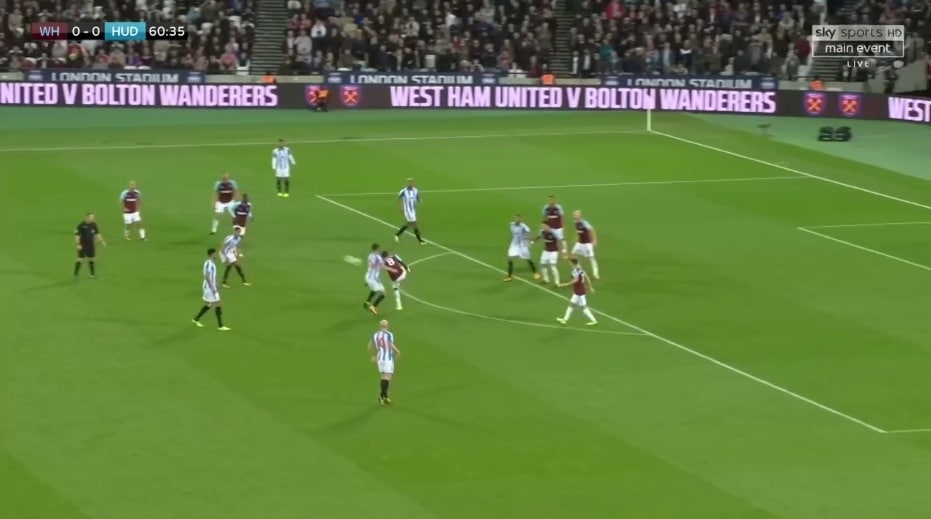 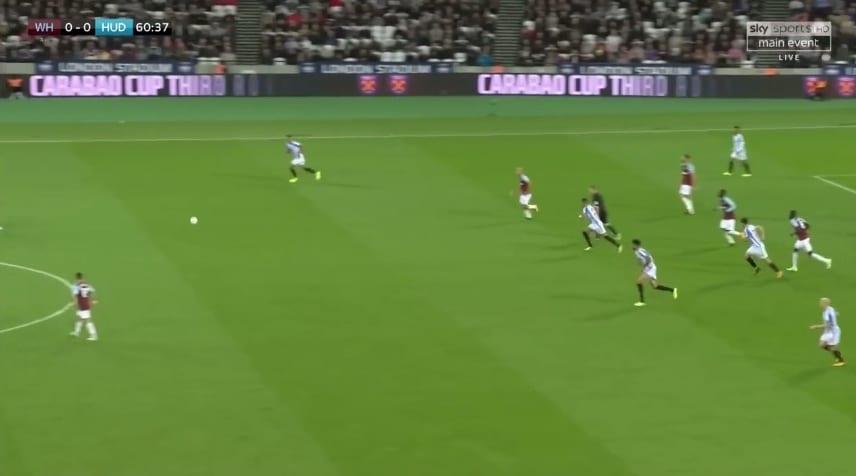 The challenge for the two of them now is to try to control games with the ball. They have the attributes to defend and recover in midfield, but need to add some attacking composure to their game, and maybe start threading a few balls through to the forwards, as Kouyaté could have done in the first example.

Bilić's side now have a couple of home games in a row against Tottenham, and then Swansea, as they look to make up for their poor start in those early away trips.

The visit of Spurs will be a real test of their improvement so far, and it will be a fixture where their dynamic midfield duo will have to be at the top of their game.