After an impressive 2016/17 season for Roma, Kostas Manolas looked set to leave the Stadio Olimpico for a move to Zenit St. Petersburg.

Once linked with Arsenal, it appears he’s become a Chelsea transfer target, as, according to the Daily Mail, the Blues have swopped in for him.

The Greece international looked set to join the five-time Russian champions after three seasons in Rome, and the centre-back was due to arrive at Zenit for his medical on Wednesday.

But he didn’t turn up due to an apparent dispute over his wages, which left the door ajar for Chelsea to hijack the bid, with Antonio Conte earmarking Manolas as a potential replacement for Bournemouth-bound Nathan Aké in his defensive options.

While Italian teams may not be as defensive as they once were, teams in need of a reliable defender almost always head to Italy to do their shopping.

Kalidou Koulibaly at Napoli, subject of Liverpool transfer rumours, and German international Antonio Rüdiger show that it’s not just Italian defenders thriving in Serie A, something that is perhaps best embodied by the latter’s partner at the heart of the Roma defence.

Playing alongside the likes of Francesco Totti, Manolas has always been blessed with great team-mates, something that began when he joined AEK Athens as a teenager.

Thrust into the starting XI while still only 18, he immediately forged a great understanding with club legend Traianos Dellas, who was of course a key figure in the country’s incredible triumph at Euro 2004.

Before he scored his only international goal in the semi-finals and played a major part in the robust rearguard that was so crucial in their unlikely triumph, he had played out a career that took in spells at locations as varied as Perugia, Sheffield United and, of course, Manolas’ current club Roma.

“It is an honour to play alongside such a great player like Dellas,” Manolas said at the time.

“I have developed and become a better player. His experience has helped me become confident on the ball and the decisions I make in the game. I’ve learned a lot from him and he is basically like a teacher to me who I look up to.”

That didn’t stop Manolas leaving, upsetting his former fans as he won two league titles with bitter rivals Olympiacos before joining Roma in the summer of 2014.

The move is believed to have been for €15million, with the player signing a five-year contract, paying him a reported weekly salary of just under €35,000, something Chelsea, and Zenit, you would expect too, could easily increase.

For their money, Roma get an old school defender, one who is never afraid to get physical with opposing players while clearly enjoying a testing head-to-head battle.

His reading of the game is brilliant, while he combines the pace needed to keep up with quicker strikers with the strength and power to contest event the most robust forwards he is asked to mark.

Manolas is comfortable in either a traditional four-man defence or a back three, his speed across the ground and ability to recover are essential to his success in the latter, and that will have alerted Conte.

He is more than capable of winning the ball, making an average of 1.2 tackles and 2 interceptions per game this season, also making good use of his solid 6ft 2ins (1.87m) frame to win 2.4 aerial duels per outing.

That he has won 77 of the 107 such battles he has contested this term indicate Manolas would be more than adept at adapting to the English style of play, while he is smart and alert to diagonal balls behind the defence and diligent at set pieces.

That effectiveness at dead ball situations has yet to translate into goals at the other end either of the pitch however, the 25-year-old netting just twice in his 131 appearances in all competitions for Roma.

Of course he is not the perfect defender.

His distribution is limited, connecting with 87.3% of his 48.9 attempts per game but many of those are short and sideways to a fellow defender or simple balls into midfield.

Manolas rarely attempts difficult or incisive passes, but there is something to be said for the fact he knows his capabilities and what he can’t do, rarely being tempted by a long Hollywood effort. 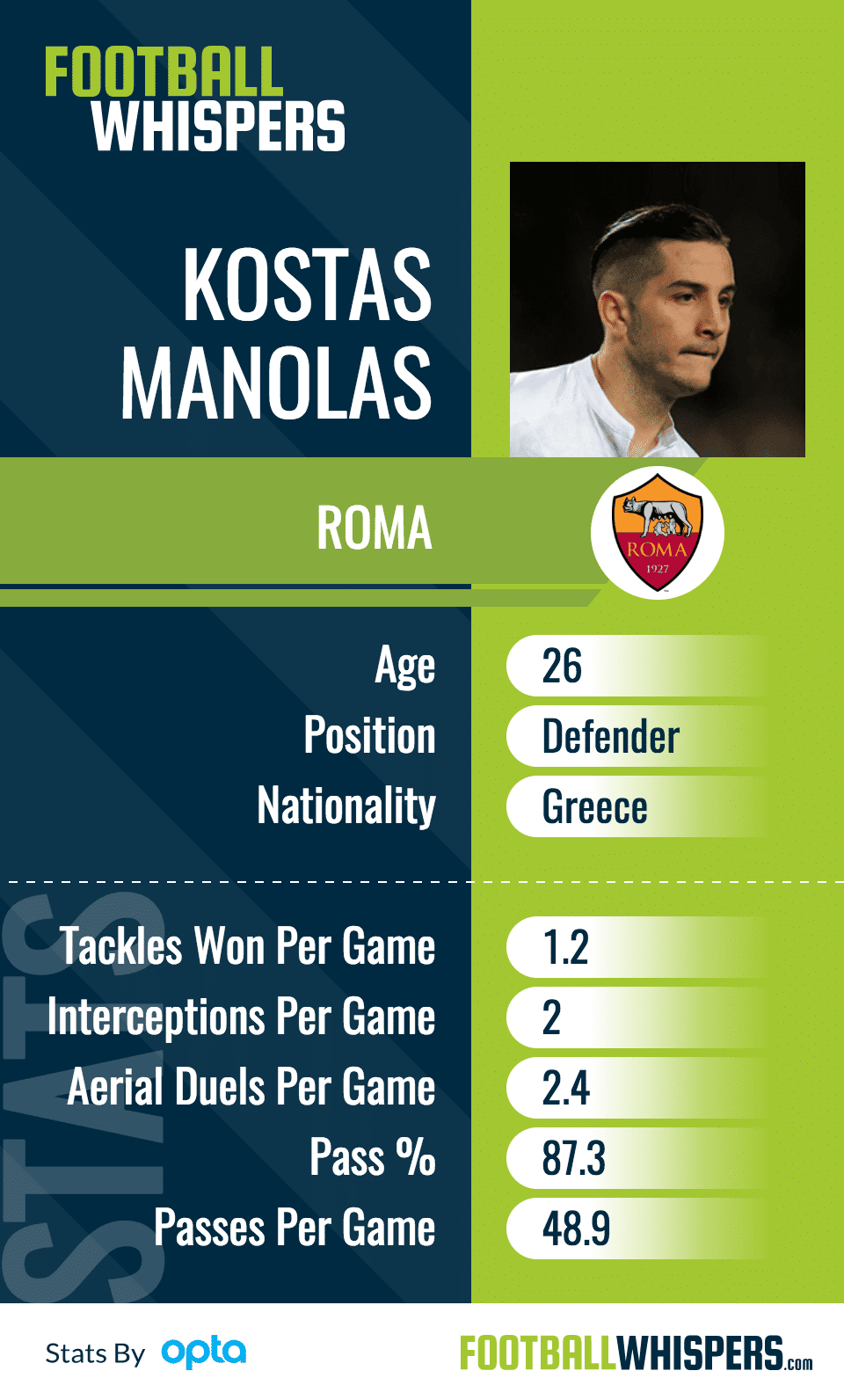 One common theme over recent years has been Roma selling a high-profile player in order to balance the books. The past few seasons have seen the likes of Marquinhos, Medhi Benatia and Miralem Pjanic have all been sold on for huge profit, meaning it is no surprise to see Radja Nainggolan, Rüdiger and Manolas all be discussed as potential departures this summer.

For the Greek international that is nothing new however, with rumours of a move to Chelsea or Arsenal – who reportedly had a €40million bid rejected twelve months ago – never too far away.

He would clearly suit the Premier League, his style of play and temperament fitting particularly well with the demands of Conte as he looks to enjoy the return of Champions League football to Stamford Bridge.

And with Conte seemingly failing to bring Bonucci on board, his desire for a defender is clear.