Unai Emery has done what a lot of managers couldn't do; last a full season after succeeding a decorated predecessor.

So, for that, Emery deserves recognition for having steered the Arsenal ship through the first phase of the post-Wenger era.

Of course, it's been a mixed bag. Emery's Arsenal are capable of battering Tottenham Hotspur 4-2 but are equally likely to lose three games on the bounce against Crystal Palace, Wolves and Leicester City after having seen off Napoli.

Ultimately, a leaky defence has cost the Gunners their place in the top four and, while they can still enter next season's Champions League by beating Chelsea in the Europa League final, centre-back is undoubtedly their problem position.

Arsenal conceded 51 goals during the 2018/19 Premier League season, 12 more than Chelsea and Spurs, who finished third and fourth, a point and two points above them respectively. Having scored an impressive 73 times focus must now shift to the opposite end of the pitch.

And if their £105million combined outlay on Pierre-Emerick Aubameyang and Alexandre Lacazette has showcased the obvious benefits of spending big, Arsenal have little excuse not to invest at the back.

Liverpool (Virgil van Dijk) and Manchester City (Aymeric Laporte) have both secured the signatures of team-elevating central defenders and, while Emery won't have £75million to spend, capturing a proven centre-half should be item one on this summer's agenda.

That perhaps explains why the North Londoners have been linked with a £31million swoop for Roma's Kostas Manolas.

According to reports, the 27-year-old Greece international will be allowed to leave the Giallorossi should they fail to secure a top-four finish (at the time of writing, they're sixth with one Serie A game remaining, three points off Inter and with an inferior goal difference).

But is he the man to shore up Arsenal's defence?

Several Gunners supporters will be wary that their last significant investment in a centre-back gave them Shkodran Mustafi.

The 27-year-old German, who cost the club £36million from Valencia in 2016, has been anything but a steady, commanding presence of late, his error-strewn displays, particularly during the latter stages of the season, prompting fans to call for his departure.

In addition, Laurent Koscielny is 33 and, although Emery can welcome Rob Holding (injury) and Calum Chambers (loan) back next season, the 47-year-old does not have the defensive personnel to challenge for the title.

Manolas, who attracted interest from Manchester United in January, has good and bad qualities.

First, the good; he's remarkably quick and athletic, which allow him to play in a high-line and to make up ground rapidly should he be caught out of position. Capable of making astute readings of the game, he averages 1.93 interceptions per game.

While physical gifts are far from everything a defender needs, it is important in the modern game. For instance, in November, he was clocked as the fastest player in the Champions League with a top speed of 33.1 kilometres per hour.

Given some of the speed merchants that feature in Europe's top competition, that's no mean feat. The nephew of AEK Athens legend Stelios Manolas, he has clearly benefitted from some good genes.

The Champions League was, of course, also the stage for Manolas' greatest moment in a Roma shirt, scoring the goal which sealed their remarkable comeback over Barcelona last year.

Unfortunately, while that header ensured a very special place in the hearts of Roma fans, this season has been marred by inconsistency.

There have been solid displays but also error-strewn ones. During the Champions League round of 16 second leg against Porto in March, he was caught in possession by Moussa Marega, which led to Tiquinho's goal on the night the Giallorossi were sent crashing out of Europe. 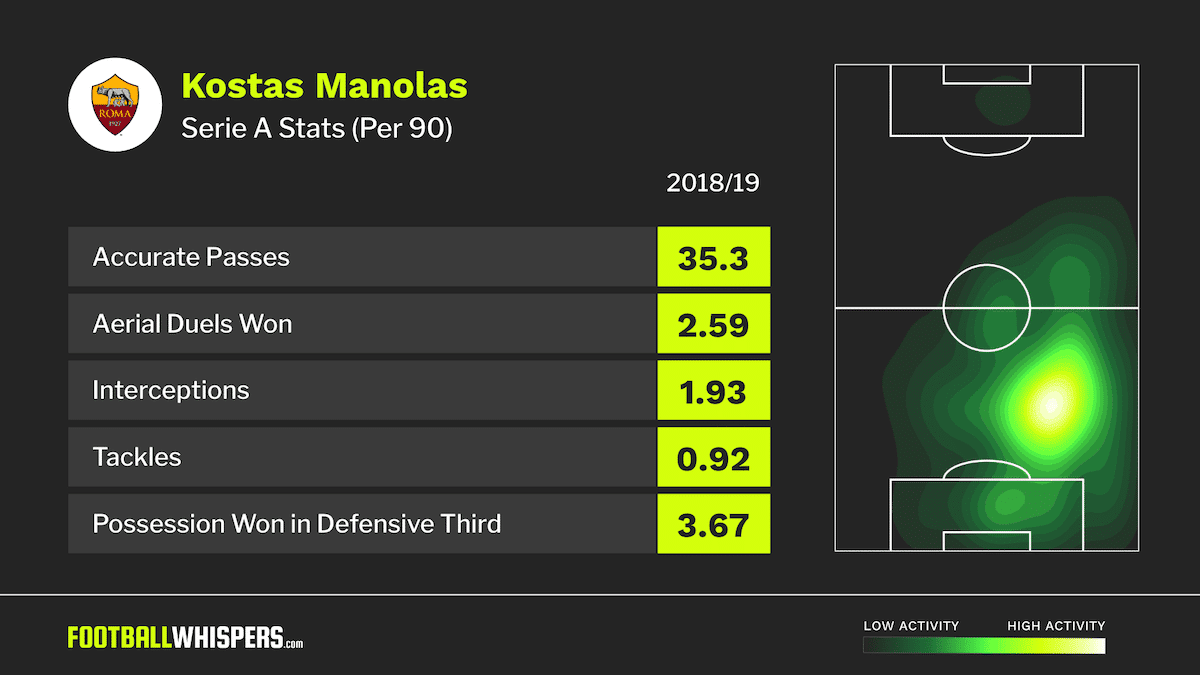 In a way, Manolas is a readymade Arsenal defender. He evokes strong responses from Roma fans, be they gushing praise or scathing criticism. The Greek has a thick skin, a vital attribute for any prospective Arsenal defender.

No defender is perfect. Mistakes are inevitable in football, particularly with the speed at which the game is played these days. Manolas's strengths and weaknesses are clear. His superior athleticism is offset by a tendency to make reckless, unforced errors.

The two legs against Barcelona neatly encapsulate what makes him at once inspirational and unpredictable. Having scored an own-goal at the Camp Nou, his perfectly judged near-post flicked header sent the Stadio Olimpico into bedlam.

Despite his deficiencies, however, £31million for a 27-year-old – when Harry Maguire will cost somewhere between £75-90million – is certainly worth consideration.

It is possible that, with compatriot Sokratis Papastathopoulos by his side, Manolas could flourish under Emery.

He isn't going to be a Van Dijk-esque, transformative signing but, with a reported £40million, are Arsenal really going to do much better?