When you lose a game after attempting 33 shots on goal and holding 75 per cent of possession, questions will be asked and blame will be pointed.

With just four shots on target, Manchester United scored twice, beating Arsenal 3-1 at the Emirates Stadium. After a shaky start, the Gunners were excellent and take away an amazing performance from David de Gea, it could have been very different.

Mistakes cost the home side dear and without their initial collapse it could have been very different. Laurent Koscielny has been the biggest brunt of the blame from Saturday’s performance, you can’t defend him.

His terrible pass across the pitch which handed United the impetus for the first goal was a terrible decision from an experienced player.

Later in the second half he was lucky not to see red when he brought down Romelu Lukaku and stopped another counter-attack from the away side.

“I'm not taking anything away from United, and the way they played, but you don't play a pass across the pitch like Koscielny did for the first goal,” said Arsenal legend Ian Wright on Match of the Day.

“I think those goals could have been avoided by simply just switching on.”

Rather than just be labelled as a poor day for the Frenchman, it has brought up a lot of doubts over the ability of the 32-year-old and whether or not he is up to the task of being the Gunners' lead centre-back.

Koscielny finished the weekend’s game with two tackles won, one interception and four clearances. Yet, it’s the two fouls, the yellow card and the error which led to the goal that grab the headlines.

Since leaving Lorient in 2010, Koscielny has played over 200 league games for the North London club. This, his eighth campaign, has perhaps been his worst, but does it mean he’s no longer a positive influence on the club? Is this the time for Arsenal to move on, or is there life in the old dog yet? 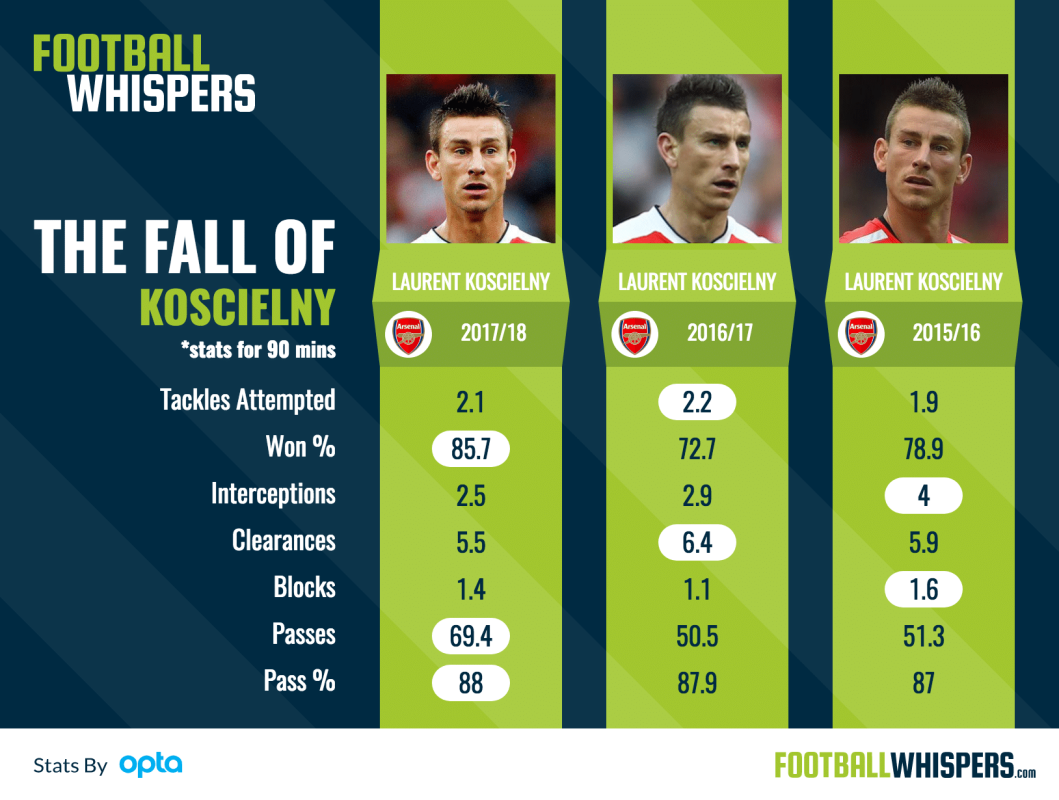 This season, the France international is attempting 2.1 tackles per 90, which is on track for what he managed over the past two campaigns.

Where he has dropped is in terms of the interceptions and clearances he manages. In the former he has fallen from four to 2.5 in two seasons and although his clearances have only dropped 0.4 in three campaigns, he has averaged as high at 7.7 per 90 in the past.

One of the most interesting statistics shows that this term it’s Koscielny who is being asked to play the ball out of defence more and more, going from an average of 50.5 and 51.3 passes per 90 to 69.4.

Usually it would be Per Mertesacker or Shkodran Mustafi leading with the ball at their feet, but due to injuries and the new formation, that job has fallen to the Frenchman.

A slight increase in completion percentage, from 87.9 per cent to 88 per cent, may not suggest poor form, but when you are attempting more passes, completing the same level means that more are going astray, just like on Saturday.

Outside of his passing mistakes, Koscielny’s biggest failing have come when the Gunners have been caught in behind and he must recover.

Against United, Manchester City and Everton, there are examples in each game of the defender being caught and fouling an opponent from behind.

Fouling Lukaku, the Arsenal centre-back was the last man, often called a smart foul, it stopped United having another chance on goal. However, that can’t be said for his foul against City.

In the graphic below, you can see he is not the last man, but he’s chasing down Kevin De Bruyne with three team-mate between the Belgian and the goal. 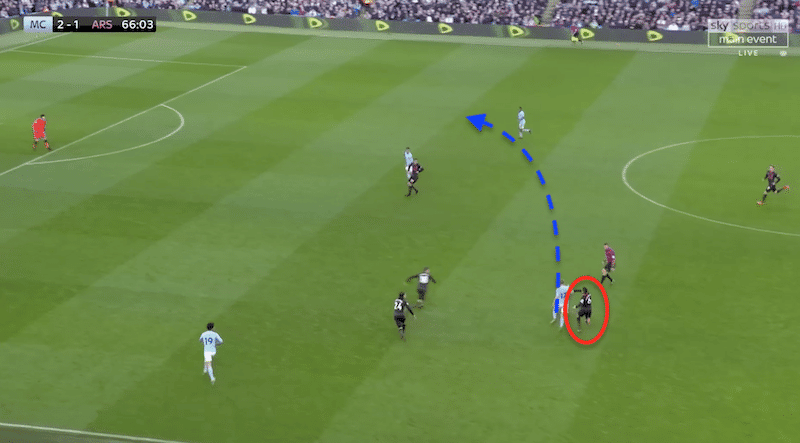 Koscielny slides in, bringing down the former Chelsea midfielder. There was danger out wide on the right if the pass had found its target, perhaps at 2-1 down it was the right thing to do.

Yet, it felt like a player knowing he didn’t have the pace to recover rather than him spotting the danger.

The 5-2 win over Everton was a great moment for Arsenal. Playing Alexandre Lacazette, Alexis Sánchez and Mesut Özil together for the first time, but from the graphic below you find another worrying example of Koscielny’s ability. 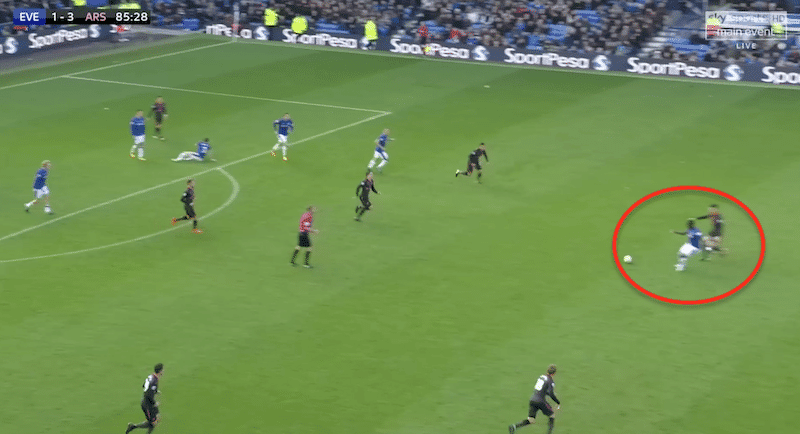 About to hit on the break, Oumar Niasse is the outlet ball and looks to quickly turn. In normal circumstances, you wouldn’t be surprised to see the Frenchman take down the forward. However, 3-1 up and with just five minutes left on the clock, there is no need to rush in.

The smart play, the experienced play, would be to stay on your feet.

Koscielny steams in, makes a poor tackle and brings down the forward. It’s disappointing to see a defender with all his experience make that decision, especially with Nacho Monreal covering the danger.

The Premier League has changed, tactics have changed and what you need from your centre-backs at the top level has ultimately changed.

Manchester United showed on Saturday they don’t need the ball to punish you. City are defeating all-comers and are breaking Premier League records hitting opponents on the counter. Even Liverpool, with Jürgen Klopp’s high-press, are much more comfortable waiting for their moment to pounce.

If you are going to play possession football, you need pace at the back, players capable of holding a high line, but who are able to recover. Koscielny has been dealing with an Achilles issue, so playing games in short succession harms his ability to get back.

If you are a club with ambitions of finishing in the top four of the Premier League, the number of games played can’t become an issue with your best centre-back.

The Christmas period can make or break title challenges, this would suggest Arsenal could face a tricky winter.

This is not to say Koscielny is finished, but there is a case to be made that he is no longer at the elite level needed or good enough to anchor the Gunners back-line.

Facing the challenge City, United and Liverpool now bring to the table, the former Lorient man is no longer the best man at the heart of Arsenal’s possession based football.

He could still be great for a side who don’t hold such a high-line, but similar to Gary Cahill at Chelsea, age and football’s development has gotten the better of these veterans.

It’s not as simple as saying Koscielny has lost it, he just hasn’t got the tools to be the saviour of Arsenal's defence.