Kortrijk and OH Leuven meet for a First Division A opener on Saturday, July 23rd. Can either side kick their campaign off with a victory? Read our free predictions and find the latest odds for the fixture below in our detailed match preview.

OH Leuven have beaten Kortrijk in three of the clubs’ last four meetings. Can they upset the odds to win again on Saturday? Read our top predictions for this weekend’s fixture below.

OH Leuven start their new First Division A campaign with a trip to play Kortrijk on Saturday and the visitor’s record against their hosts indicates they could enjoy their campaign opener. Leuven have won three of their last four encounters with Kortrijk  – a run that should arm them with plenty of confidence this weekend. Kortrijk, who lost six of their final seven home matches last term, are vulnerable on their own patch and a stake on Leuven in the generously-priced double chance market is advised.

Neither Kortrijk or Leuven were particularly reliable in defence last season, keeping relatively few clean sheets between them over the course of the campaign and both backlines could well be breached again on Saturday. BTTS has been a winning bet in 100% of the last three skirmishes between the clubs and there is enough wiggle room in the odds to make this market backable again this weekend.

Top Betting Odds and Stats for Kortrijk vs OH Leuven

View our selection of the best stats for Saturday’s fixture below alongside a tool to help you choose the best odds.

Read all of the injury updates and team news for Saturday’s First Division A match between Kortrijk and OH Leuven below.

Kortrijk finished in a lowly 13th position last term and they signed seven new players over the summer in a bid to spark a revival. Habib Keita, who joined on loan from Lyon and right winger Youssef Challouk, who signed from KMSK Deinze, were among the more interesting additions. 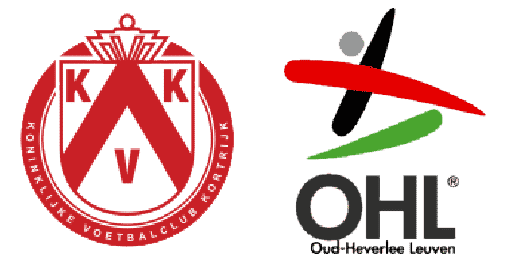 Who are the current Belgian champions?

Kortrijk vs OH Leuven is not being screened live in the UK.