It's fresh start at Arsenal this summer and Gunners fans are allowed to feel optimistic perhaps a bit more than they have done in previous seasons now there's a new man in the managerial hot-seat.

Unai Emery is already getting stuck in with his transfer recruitment, snapping up the experienced Stephan Lichtsteiner on a free from Juventus and is on the verge of bringing 17-year-old Yacine Adli to the Emirates Stadium from former club Paris Saint-Germain.

There are rumours Emery is hoping to build a team around Aaron Ramsey through the middle, and so it will be interesting to see what system he will adopt in north London.

Arsenal moved to the in-fashion 3-4-3 formation last year for the large majority. A move which saw Nacho Monreal operate as a centre-back and not a full-back. It meant the left-back position needed to be filled.

And one man who tipped to take up that role arrived a year ago with high expectations. Sead Kolašinac. The full-back was named in the Bundesliga Team of the Season with Schalke 04 before his move to the Emirates. He arrived with a reputation.

Big, powerful and possessing a fierce left-foot, the Bosnia and Herzegovina international looked like he'd fit into the Premier League with ease, and it seemed to have been a coup of a free transfer, too.

However, he failed to live up to expectation. So what went wrong for the Arsenal No.31?

He got off to a dream start, scoring on his debut in the Community Shield and playing his part in Arsenal's way to the top end of the Premier League by the end of November.

Kolašinac's positioning, however, was often called into question at times. Eager to get forward, he perhaps doesn't get back quickly enough to help his defensive colleagues, and there's a feeling he isn't suited to a back four system.

Since January, the player has started just eight times out of a possible 17. Four of those came consecutively in the final games of the season, perhaps to boost his confidence heading into the summer. However, it's worth noting that Kolašinac did pick up an injury at the start of the year, ruling him out of three matches.

But he did fail to regain his place and has looked to have lost sharpness.

So how does Emery get the best of him? Well, it seems he has two options. One is to play him on the left-side of a three-man defence. His power and aggressive style of play could be suited to the position, though, and he's able to cover both central and wide areas. He would have to sacrifice going forward. .

That move would leave question marks over Monreal, who impressed last season. 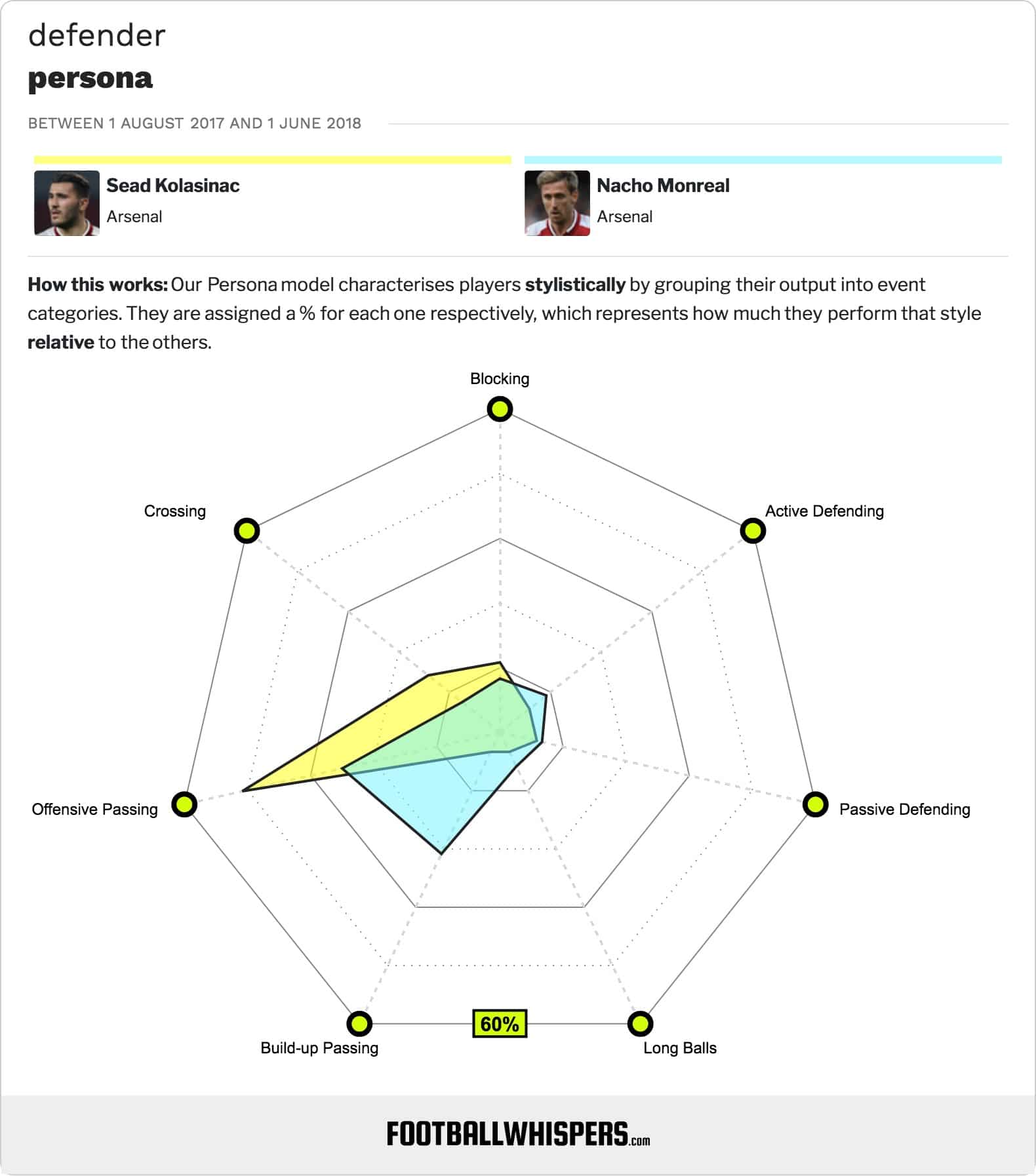 Of course, most of the big clubs have two players for nearly every position, but you wouldn't be getting the best out of Kolašinac if he was used here and there, not nailing down that centre-back position as his own.

And even if you were to fit both men in the side, It would have to be in a flat back four which Kolašinac doesn't appear to be comfortable in.

The second option, which would be better, is to have him as the left midfielder as part of a 3-4-3 formation. It's a position he played for Schalke and one he was signed to play for Arsenal.

Kolašinac had 3.84 touches in the opposition's box per 90 minutes last season, which shows his prowess and wanting to get into dangerous positions – and also ranking him highest against other full-backs in the Premier League.

He managed  four assists last season, putting him in the top seven for full-backs, an impressive amount given he was a bit-part player for large parts of the season.

Furthermore, that's evident in his range of passing. Overall, he completed 42.49 accurate passes per 90 minutes, and his forward passing nearly doubles his backwards ones.

The more he plays, the more confident he'll become – but he, like everyone at Arsenal this summer, will be looking to impress Emery in pre-season. It will feel like a new start for Kolašinac.

But Kolašinac needs to take his first season experience and listen carefully to what Emery wants out of him. It isn't just him that needs to improve but the defensive unit as a whole, and it's easy to understand why the new manager has highlighted that as an area to address.

Indeed, Arsenal are believed to have made full-back Lukas Klostermann a transfer target from RB Leipzig. Next season is huge – and the Gunners do need to give Kolašinac a chance in a forward-thinking role. You just feel as if he'd thrive a bit more in English football.

If he doesn't take the chance or is utilised in defence in a back four, there might not be any improvement – and he might be heading for the exit door.