Ronald Koeman’s final act was not one he, nor the Everton fans, will remember fondly. The admission that a group of players, largely assembled by the manager himself, were unable to play his favoured brand of football, was a sign that the situation was beyond rescuing.

As a result of his players’ apparent inability to keep possession and play the ball out from the back, the Dutchman reverted to something simpler, despite the fact they lacked the target man striker to play the long ball game.

“With the circumstances in the team it’s better to play more direct than try to play short,” he said after the Europa League defeat at home to Lyon.

Even if in Koeman’s mind they may not have had the confidence or quality to play this way, they also lacked the tools to play more direct, too. There is some pace in the ranks which would lend itself to long balls being played into the channels, to Dominic Calvert-Lewin in particular, but the failure to replace Romelu Lukaku meant that there was no aerial alternative, meaning this other style of play was also very limited and ineffective.

Against Arsenal, Everton opened the scoring when good work from Idrissa Gueye saw the ball fall to Wayne Rooney with the Gunners off guard. The Englishman rolled back the years, curling the ball into the net from outside the area to give his side a surprise early lead.

But this goal was down to the tenacious play of Gueye rather than any change in system, and once the game settled down Everton stifled their own play rather than that of the opposition, wasted possession, and failed to control the game to anywhere near the level required to maintain their lead.

The direct tactics were failing, and rather than cutting out errors in midfield which have blighted their play in recent weeks, they simply repeatedly gave the ball back to Arsenal. Arsène Wenger’s side were able to take full control of the game as a result, and this was eventually reflected on the scoreboard as the home side’s defence crumbled in a worryingly familiar manner.

The statistics reflect Everton’s lack of control and show that they only had 32 per cent of the possession. Even against a team like Arsenal, this isn’t the type of statistic which fans would expect to see in a home game. And, after all, the Toffees were supposed to be making the step up this season as they hoped to be challenging with the likes of Arsenal and the rest of the big six and the top end of the table.

Instead they find themselves stuck in the relegation zone, albeit on goal difference, but if they can’t even control their own home games then how were they supposed to lift themselves out of their slump and begin controlling their position in the Premier League?

As a team they only completed 68 per cent of their passes, which for anyone who watched the game might, if anything, appear to be on the high side. Goalkeeper Jordan Pickford, and central defenders Michael Keane and Phil Jagielka attempted 47 long balls between them, completing just 18.

The image below, from 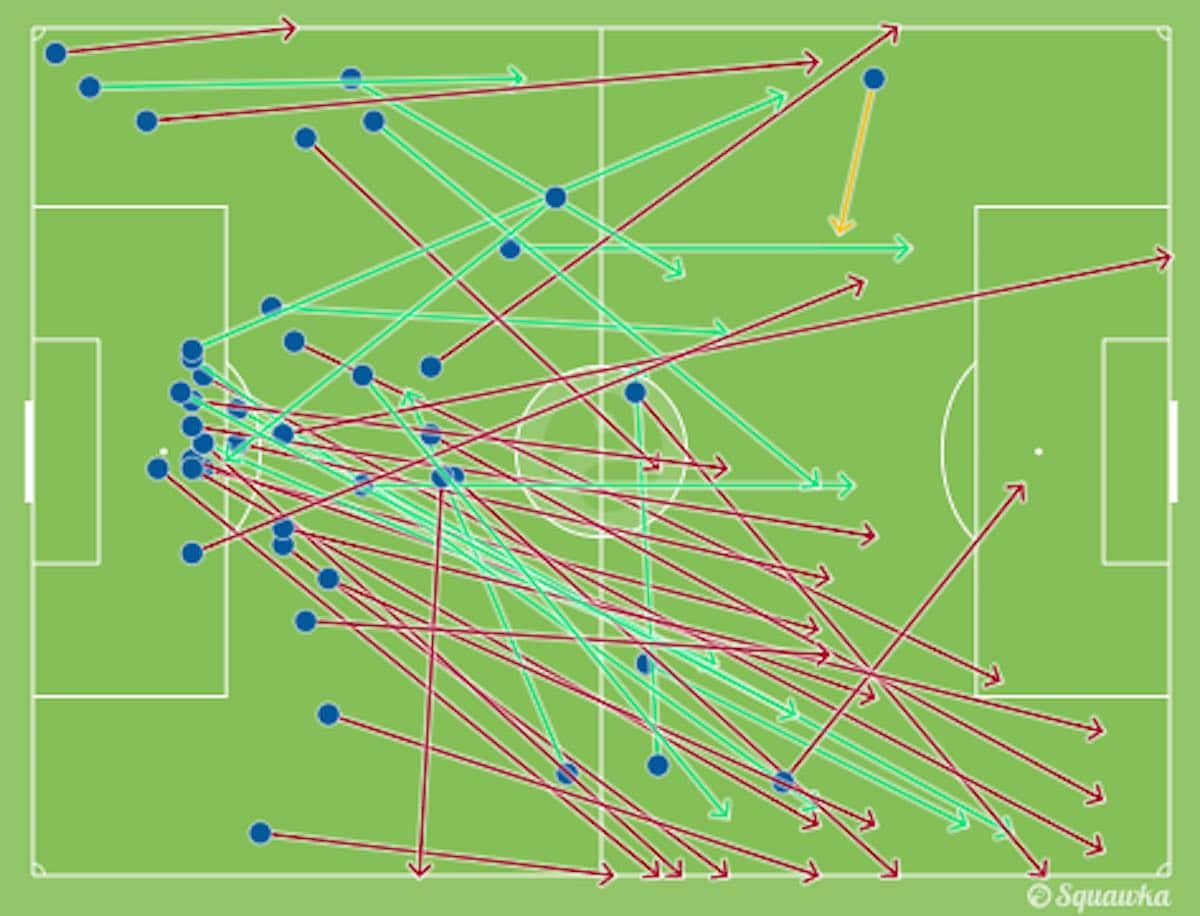 Calvert-Lewin was the main target for these direct passes, and did have some success against Nacho Monreal down that side, winning seven of 13 headed duels with the opposition defenders and three of his four challenges with the Spaniard.

But the young Englishman was fighting a losing battle for much of the game, and even on the occasions when he did win the ball there wasn’t much he was able to do with it. His own pass accuracy was just 56 per cent.

The first job for whoever becomes Everton’s new manager would be to get the players into a system where they can control possession. The right combination of skills need to be used in the right formation, but there’s no doubt that the club have some talented players on their books.

The lack of a target man centre forward may continue to be a problem, but there are plenty of other ways the team could set up until they bring in a more robust option up front. The team are awash with midfield players, so finding players to sit in the middle of the park to win and then keep the ball shouldn’t be an option.

Once they begin to control their own game and have a proper plan in place to keep the ball once they have it, they may be able to start controlling their own destiny, and begin working their way up the table as opposed to sliding worryingly down the Premier League rankings.