There are a multitude of famous ex-footballers’ sons trying to make their way in the beautiful game today.

Enzo Fernández, son of Zinedine Zidane, is currently at Alavés having previously plied his trade in Real Madrid’s youth and reserve teams, while Diego Simeone and Gheorghe Hagi’s sons Giovanni and Ianis are both playing for Fiorentina in Serie A.

However, Justin Kluivert is perhaps the most promising of the bunch. His father, Patrick, earned renown during goal-laden spells with Ajax and Barcelona in the 1990s and 2000s.

He scored a Champions League-winner for the former in 1995 before enjoying spells at the top level in Italy, Spain and England while hitting the net 40 times in 79 outings for Holland at international level.

He made his debut for the Ajax first team at the age of 17 and was on the substitutes’ bench as the team lost to Manchester United in the Europa League final last season.It’s quite a benchmark to set, but 18-year-old Justin isn’t wasting time in trying to live up to the family name.

Since then he has continued to establish himself, earning covetous glances from top European clubs along the way.

Tottenham Hotspur have been linked with a move for the player of late. The rumours make sense given Spurs’ need for extra attacking potency – they are, along with Chelsea, the lowest-scoring top-six team in the Premier League.

However, Manchester United are a potential next destination for Kluivert. Following the Europa League final, the youngster was seen chatting with José Mourinho.

VoetbalInside reported that the Portuguese said: “One more season. Then you come to Manchester. And you become my striker. One more season to shine at Ajax. Then we make history together.”

Exactly how much truth there is in that translation is up for debate; lip-reading is unlikely to provide all the information necessary. But Mourinho’s enthusiasm for the player was made fairly clear, and those who have watched Kluivert grow in the Eredivisie of late will understand why.

Who is Justin Kluivert?

The obvious answer to the above question is simply: The son of Patrick. But, on the basis of all the evidence available so far, he is much more than that. The 18-year-old is gaining attention on his own merits; already there are countless video clips and gifs dedicated to his skills.

He scored his first goal for Ajax against Excelsior in March, but his finest performance came against Roda JC in November, where he scored a brilliant hat-trick to seal victory for his team.Having come through the famed Ajax academy, Kluivert made his debut for the first team in January against PEC Zwolle. Immediately he looked comfortable, happily receiving the ball and looking to make things happen in and around the final third.

The opening goal was a fine finish into the bottom left corner after a clever give and go with a team-mate that involved fending off a marker with astute body positioning. The second was a powerful strike from outside the opposition penalty box, while the third was a remarkably calm strike following a sublime touch to bring down a long ball.

Kluivert’s goals were the most noticeable aspect of what was a man of the match individual display, but he produced in other areas. He also completed two dribbles and made four key passes.

What are Kluivert's strengths and weaknesses?

Comparisons to his dad don’t do Kluivert many favours. Firstly, his father was an exceptional player who was once among the finest strikers in the game – it’s always going to be difficult to equal, never mind surpass, that sort of career. Secondly, he isn’t a striker.

The teenager is a natural winger, one who prefers cutting in from the left-hand side onto his favoured right foot. He is tactically made to measure for the traditional Ajax system – a 4-3-3 with plenty of fluidity in forward areas.

However, despite the almost impossible expectations on his shoulders, Kluivert is happy with his own prospects. “I like it when I am compared to my dad,” he said in 2016. “He had a great career, and I hope to have one [too]. People anticipate things from me, but I feel no pressure. I just love playing football.”

One thing that Kluivert does have in common with his father, even at this early stage in his development, is a first-rate touch. However, it is worth noting that this is something seen in almost every Ajax academy graduate – even the defenders.

The 18-year-old is extremely technically proficient. He can control the ball with one touch and is not easy to dispossess.

However, one weakness at this stage is that he lacks upper body strength, which is something he would need to work on were he to succeed in the Premier League, where technique isn’t always enough to ward off attentive markers and robust challenges.

Kluivert makes up for in brains what he lacks in brawn. He times his runs well, moving off the ball to create a viable forward passing option for his team-mates. And, while he tends to hold a wide position, he isn’t afraid to come inside to receive or drive at the opposition defence. 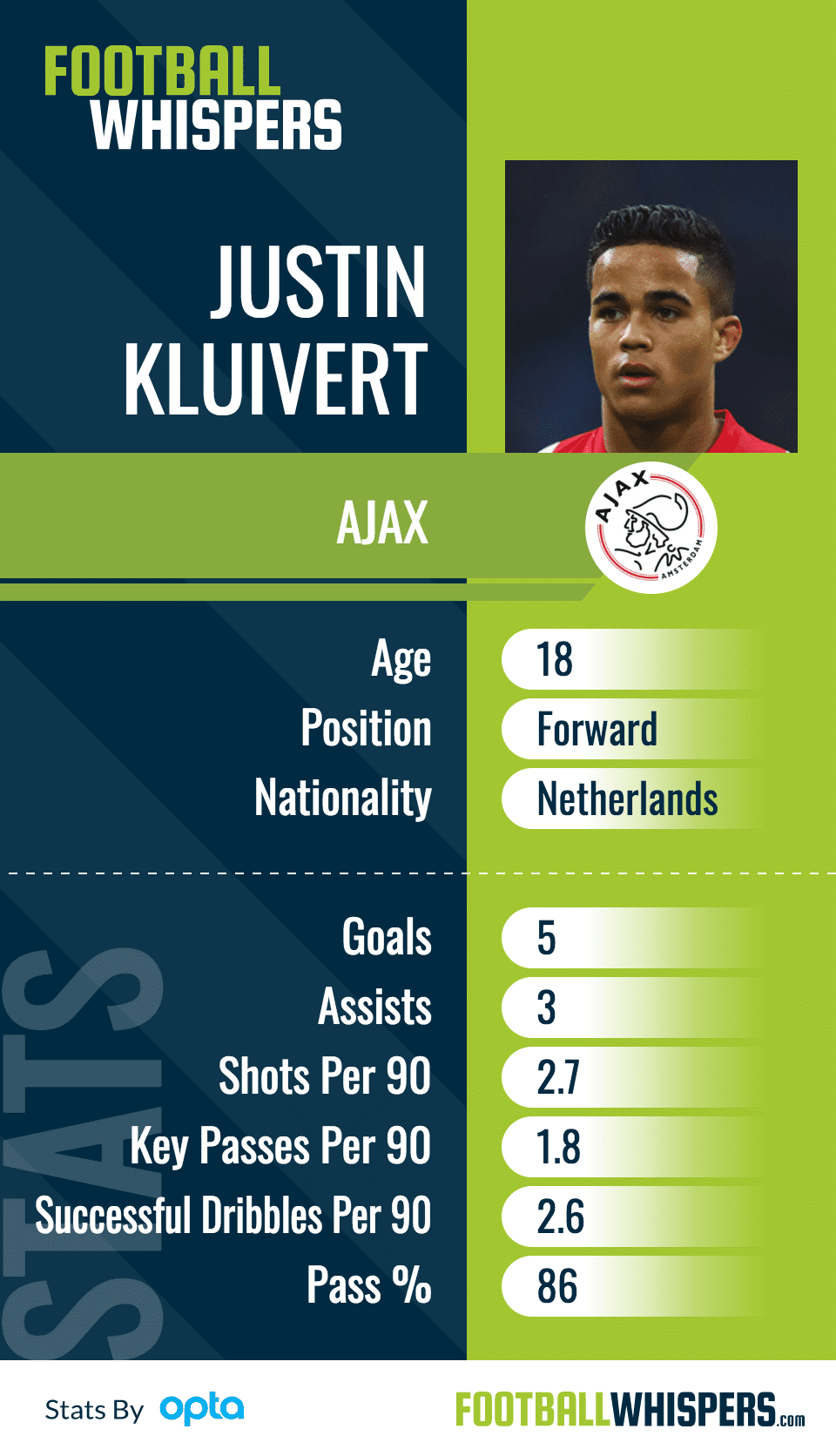 Players coming out of the Eredivisie aren’t always the finished article; often, it takes time for them to adjust to the competitiveness of the top European leagues. In recent years, Memphis Depay and Vincent Janssen are the most high-profile examples of youngsters who starred in Holland before struggling in the Premier League.

Ironically they played for Manchester United and Tottenham Hotspur, the two teams linked most strongly with Kluivert. So, would they be wise to sign from the Dutch top tier on this occasion?

It’s difficult to answer that question at this precise moment, given the player is so young and has had minimal experience. He deserves more time to prove himself and assert his position at Ajax before moving on.

Kluivert is still raw, and tactically he might not suit Spurs or United as yet. The former don’t tend to play with out-and-out wingers, while the latter seemingly prefer not to, especially in big games.

If he were to join either side, patience would be needed from all parties to ensure the move turns out to be a success.