Liverpool’s £13.5million acquisition of Xherdan Shaqiri is increasingly looking like the bargain of the summer.

This is, perhaps, not entirely surprising. Shaqiri has always been a talented player: he was at Bayern Munich for three years and had a brief spell with Inter before joining Stoke in 2015. He is not unfamiliar with Europe’s biggest clubs.

But there was always a feeling that his career was still yet to truly kick into life, that as he approached his late 20s he remained a player of unfulfilled potential.

Shaqiri was clearly Stoke’s most influential player last season – he scored eight goals as the Potters fell to relegation – but was criticised by some for what appeared to be a lack of application.

When Liverpool took him from Stoke, plenty were underwhelmed. How, they asked, would Shaqiri fit in with Jürgen Klopp’s high-intensity, aggressive style of play? Would his inconsistency at Stoke continue with Liverpool?

Any doubts have now been alleviated. Shaqiri has slotted seamlessly into this Liverpool team, complimenting last season’s front three of Mohamed Salah, Sadio Mané and Roberto Firmino. He was not signed as a replacement, but an addition, and is another example of Liverpool’s shrewd dealings in recent transfer windows.

Clearly, Klopp identified something in his side’s attack that was lacking last season, despite a total of 91 goals between the front three. On occasion, the Reds struggled to break down teams that played only with the intention of nullifying them, with packed defences and low blocks.

Shaqiri’s introduction has helped solve that problem. The best example was against Manchester United earlier this month: Liverpool had controlled the game but were level at 1-1 and growing increasingly frustrated. Klopp brought on Shaqiri, who carved United’s defence open and scored twice, sealing victory for his side.

The Swiss international now has six goals in the Premier League this season, at an impressive rate of 0.75 goals per 90 minutes. He has averaged 2.89 scoring attempts and 2.76 touches in the opposition box per 90.

And he is creative, too. He averages 1.38 key passes from open play per game, most of which are played in the final third. Shaqiri is direct but equally capable of unlocking a tight defence.

It will be pleasing, too, for Klopp that Shaqiri has proven himself a player for the big occasion. He stepped up when needed against United and emphatically proved his detractors wrong. Liverpool, clearly, did their research before signing the 27-year-old; it was less of a gamble than it might first have seemed.

“He needs a coach who gives him a lot of trust,” former FC Basel coach Thorsten Fink said in a recent interview with Bleacher Report. “Then he can decide a game. In big games, he's there. A lot of players, when they play big games, you don't see them. But Shaqiri loved big games.

“There are players who you try to motivate, and it doesn't help. If you motivate Shaqiri, he flies for you.” 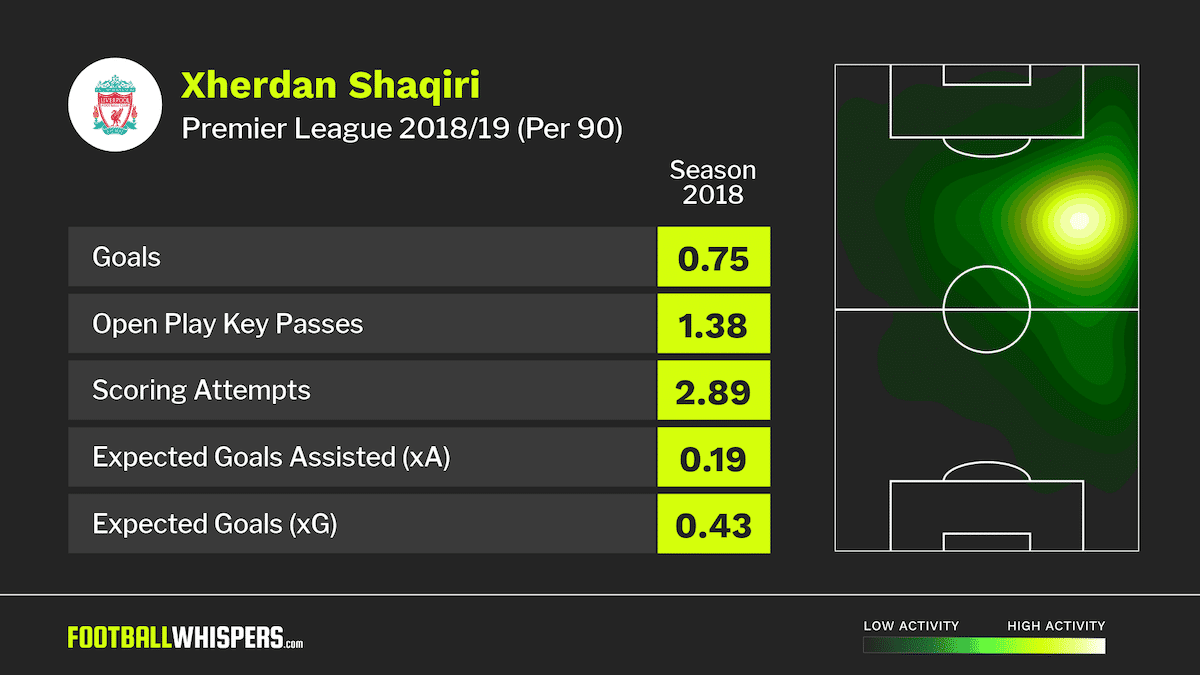 There is, you feel, still more to come from Shaqiri. He feels welcomed and wanted at Anfield, and he has responded with a string of impressive performances. But he is yet to establish himself as a guaranteed starter.

If he continues in his current vein of form, Klopp may be left with little choice but to make him a regular in his starting XI. Shaqiri has started eight of Liverpool’s 19 Premier League games so far this season, making a further six appearances from the bench.

His most recent start was against Newcastle, where he lined up in a front four alongside Salah, Mané and Firmino, and added another goal to his tally. That may be the way forward for Klopp.

Shaqiri is impactful as a substitute, but his recent displays warrant a more regular place in the team. And Liverpool have often looked a livelier, more creative unit when he is on the pitch.

“You can see on the pitch, my understanding with my teammates is very good,” Shaqiri said after the Newcastle victory. “It’s always good to score goals or give assists. I’m helping the team to win games and that’s the most important thing.”

With Arsenal and Manchester City to come over the next week, it will be interesting to see how prominent a role Shaqiri is afforded.