Jürgen Klopp‘s team selection for Liverpool's trip to take on Brighton & Hove Albion at the Amex on Saturday afternoon raised plenty of eyebrows.

The Reds have faced criticism for their defensive capabilities this term, so seeing that the German tactician had elected to send his side out with a back three comprised of two midfield players – Emre Can and Georginio Wijnaldum – either side of much-maligned centre-back Dejan Lovren didn't inspire too much confidence.

After thrashing the Seagulls 5-1 and exhibiting some of the most devastating counter-attaking football the Premier League has witnessed this season, the majority of the post-match focus was on Liverpool's dynamic strike force – in particular top-scorer Mohamed Salah.

But the defensive system worked a charm, offering a solid base from which the Merseysiders could spring their lightning-fast attacks, while also aiding the Reds' ability to break down Brighton's deep defensive block by clever positioning and creation of numerical superiority in key zones.

Ever since Antonio Conte's tactical brainwave reversed Chelsea‘s fortunes and sent them on their way to the Premier League title back in October last year, three-man defences have become commonplace in England's top flight, so Klopp's use of a back three was not surprising in itself.

But the fact that he decided to field two midfielders in his backline gave the tactic a fresh twist. One that brought about some unique possibilities both in and out of possession.

Ordinarily, dating back to his first coaching gig with Mainz in his native Germany, Klopp's modus operandi is to squeeze the pitch when possession is lost. His gegenpressing system is predicated on reprogramming his charges to move forward when they lose the ball, rather than drop back into a safety-first mode.

Klopp's theory, one shared by influential German coaches Ralf Rangnick and the Liverpool manager's former mentor Wolfgang Frank, is that, rather than drop back into a defensive shape at the breakdown of play, it is better to strike the opposition, closing them down in a coordinated fashion and cutting off passing lanes. This approach requires a degree of courage from its exponents who must move up towards the opponent in possession and their closest colleagues; it often leads to the ball being regained high up the pitch.

Liverpool this season have been less aggressive in their counter-pressing than, say, Klopp's title-winning Borussia Dortmund side of 2011 and 2012, but the trip to Brighton offered a new twist altogether.

Perhaps having seen the way Tottenham Hotspur‘s back-three, high-line tactics have backfired on them at times this term, with opponents exploiting their relative lack of pace by playing direct balls in behind the Spurs defence, Klopp elected to utilise Lovren as a form of insurance policy.

Whenever Liverpool had the ball, Can and Wijnaldum would look to move up alongside Jordan Henderson in the deep midfield zone, but Lovren would always remain ten yards further back, ready to sweep up any attempts Brighton mustered at a counter. 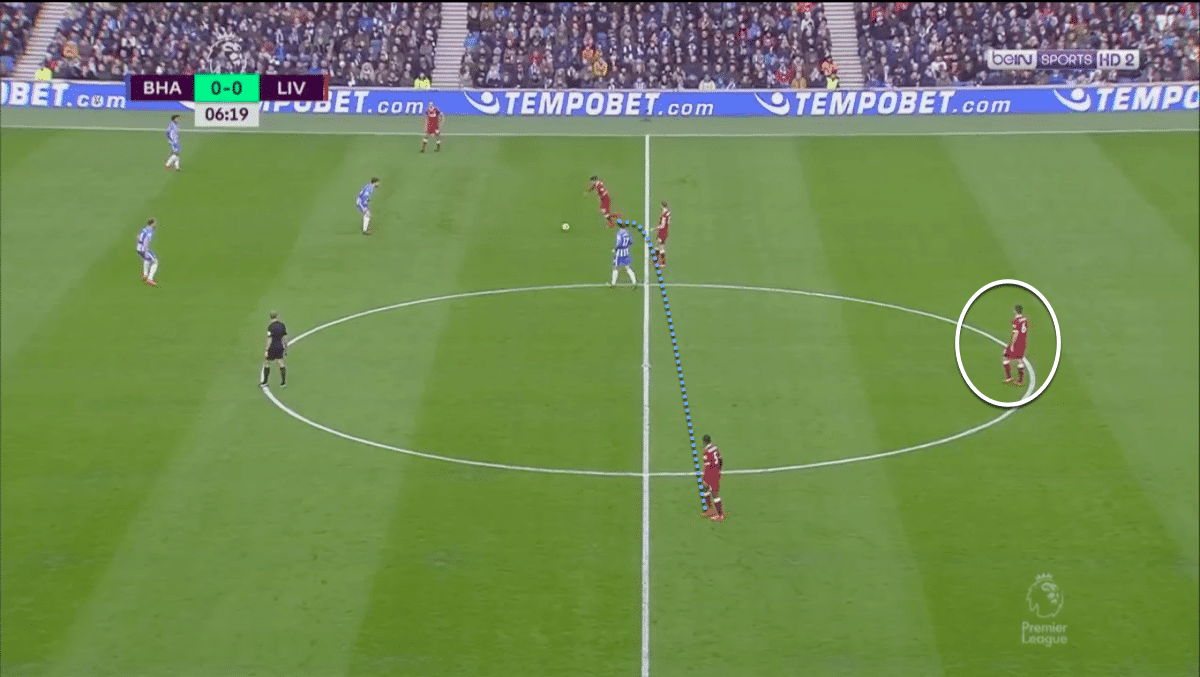 The above image shows Can, Henderson and Wijnaldum aligned in midfield, with Lovren (circled), holding the fort as the deepest man. From here, the Croatian has a full view of the field and is able to anticipate the progression of play, positioning himself to snuff out any potential danger. 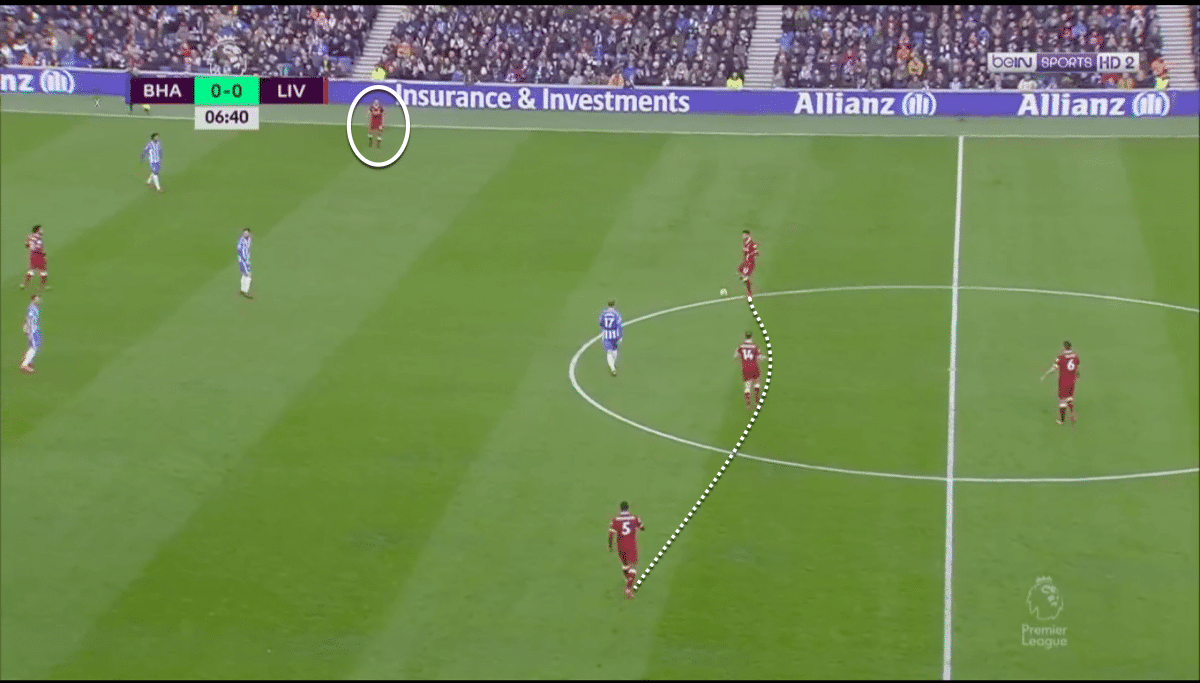 Again, we see Can and Wijnaldum pushed high either side of Henderson with Lovren in behind. But this image also shows the effect this had on Liverpool's wing-backs. With two of the back three moving up to help control and offer a numerical advantage in the midfield area, Trent Alexander-Arnold (circled) and Andrew Robertson were able to push high and wide, ensuring Liverpool made the pitch as wide as possible when in possession.

This is a tactic similar to one Pep Guardiola tends to employ. At Manchester City, the Catalan coach often looks to either move ball-playing centre-back John Stones into the midfield zone to support Fernandinho, or, as was regularly the case during his Bayern Munich reign, the full-backs will tuck inside an allow the wide midfielders to push higher up the pitch than would otherwise be expected. This is how he is able to field attacking midfielders Kevin De Bruyne and David Silva in unorthodox roles without hampering there offensive impact.

Against Brighton, this meant Philippe Coutinho, whose starting position was on the left of the midfield three in Liverpool's 3-5-2, was stationed high, just behind attacking duo Salah and Roberto Firmino, for much of the game. 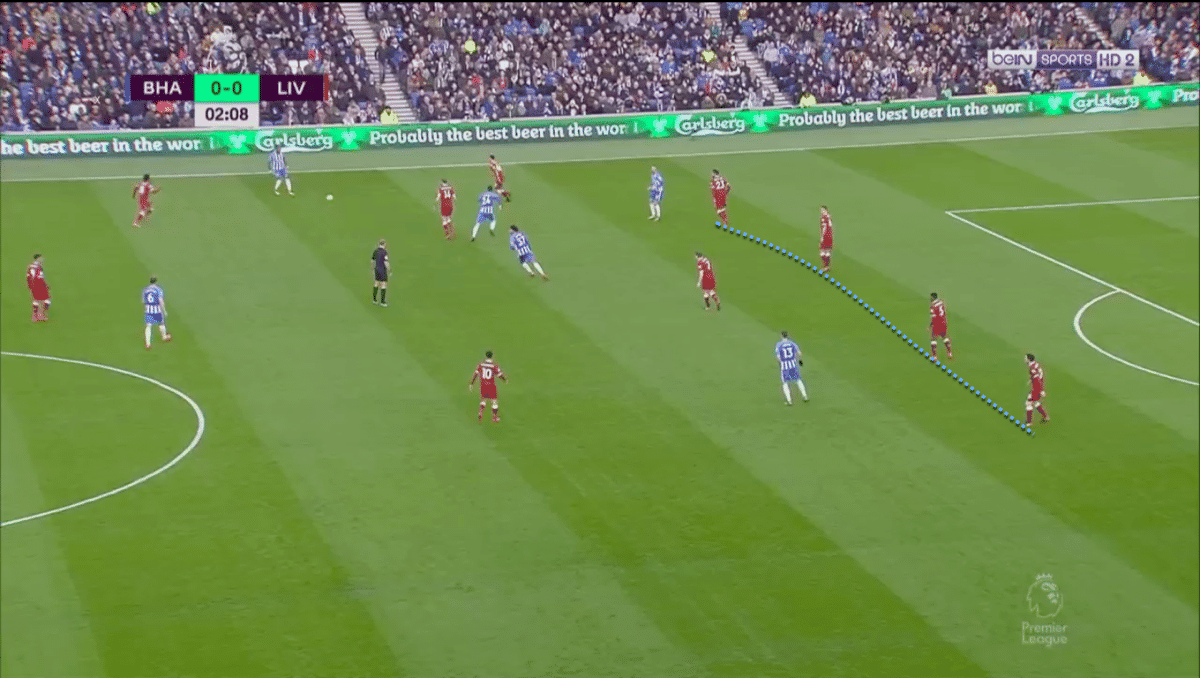 On the occasions when Brighton managed to construct a sustained attack, Can and Wijnaldum would fall back alongside Lovren, but it was the movement of the wing-backs that was especially interesting.

As the above image shows, the wing-back on the opposite side to the ball would drop back to form a line of four, while the wing-back nearest to the ball was free to press the Brighton player in possession. Henderson and James Milner would shuttle in front of the backline, applying pressure to the ball. 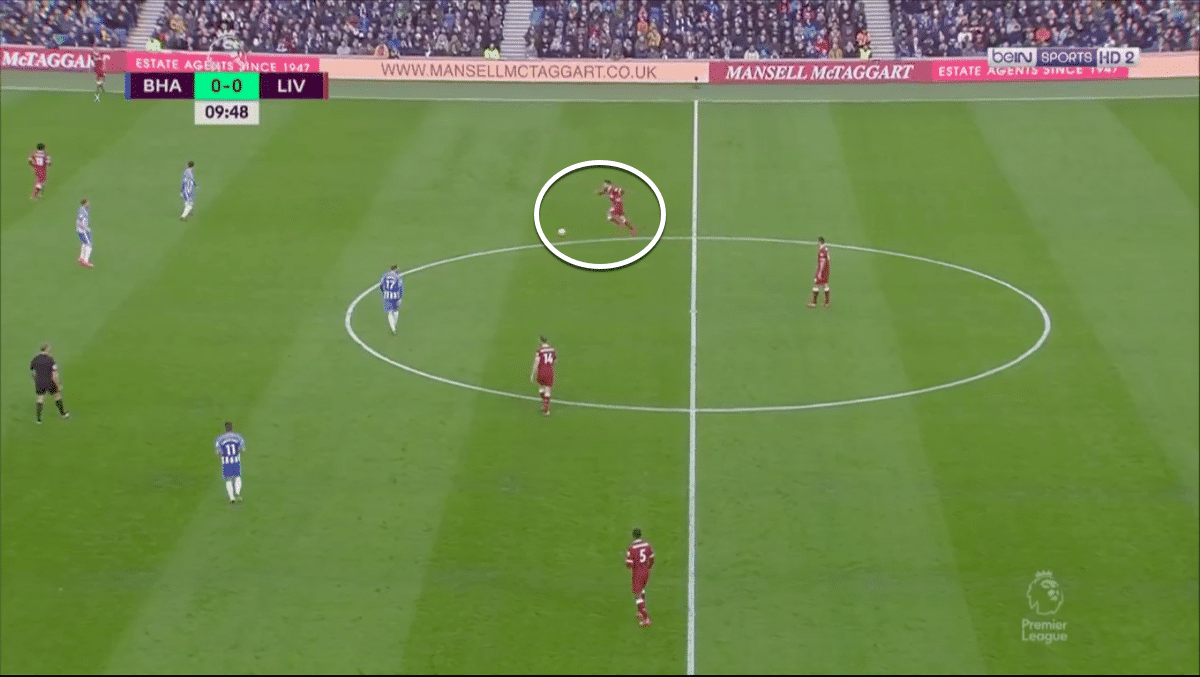 The biggest impact this defensive shape had on Liverpool's performance was how it enabled Klopp to stack his side with capable playmakers in deep positions, though. Can's 103 touches and 90 attempted passes was second only to Henderson.

Above, we see the German international bring the ball out of defence in a manner typical of his display at the Amex. 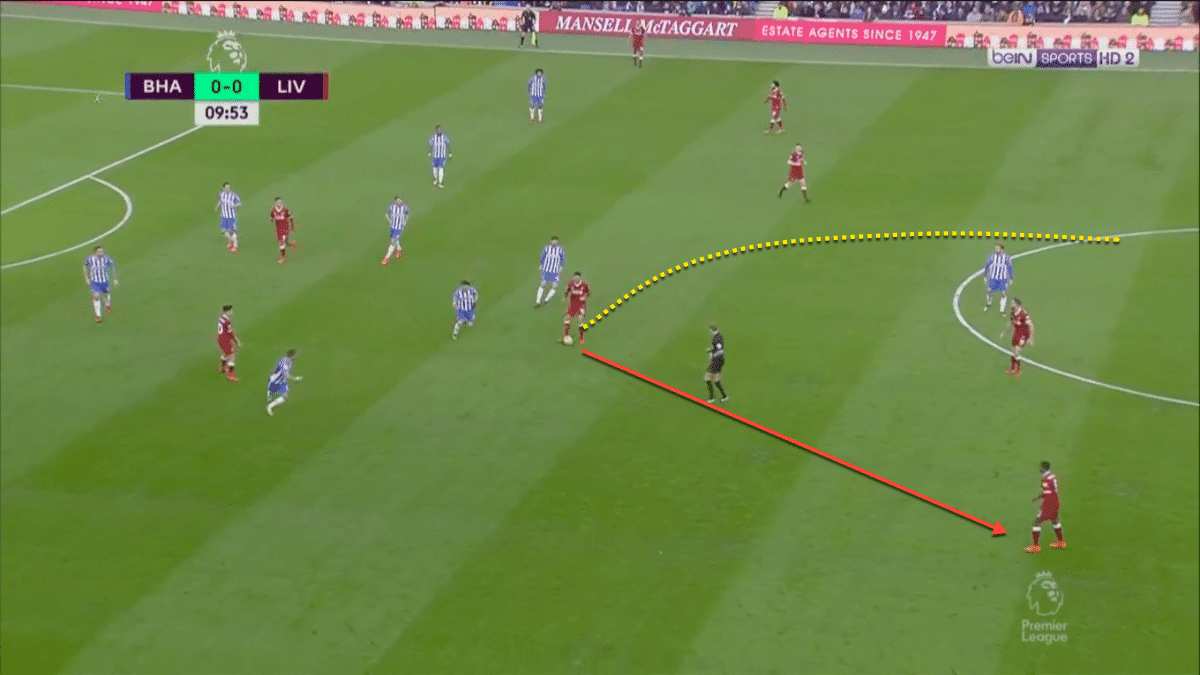 Can carries the ball forward until he is met with pressure at the edge of the attacking third. Then, when he surveys his options, he sees both Henderson and Wijnaldum available. On this occasion he picks out Wijnaldum who himself moves forward. 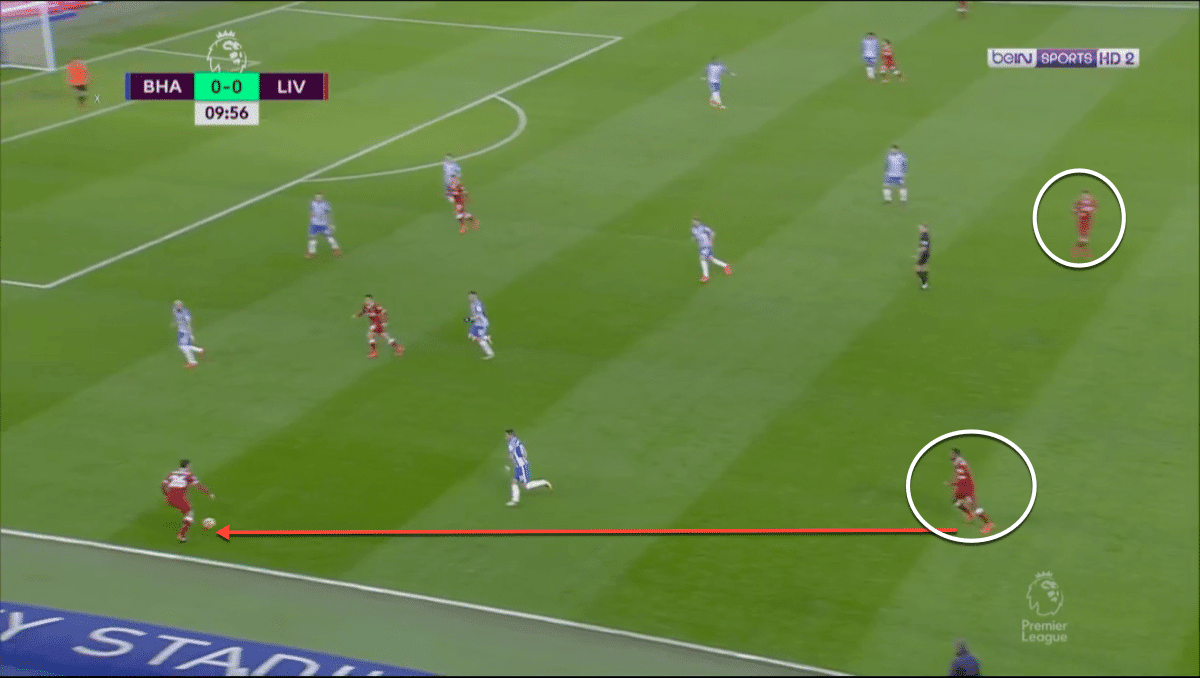 Wijnamdum finds Robertson, who, thanks to the ability of Wijnaldum and Can (both circled) to maintain high positions on the edge of Brighton's defensive structure, was able to maintain a high, wide position as the move was being built.

Toby Alderweireld and Jan Vertonghen have done similar things for Spurs this season, but they lack the incisive passing qualities of the Liverpool pair. The Tottenham duo push into similar areas from which they act as ball-winners, quickly regaining and recycling possession in high zones. Can and Wijnaldum offer this too, but also have a greater play-making value to their team. 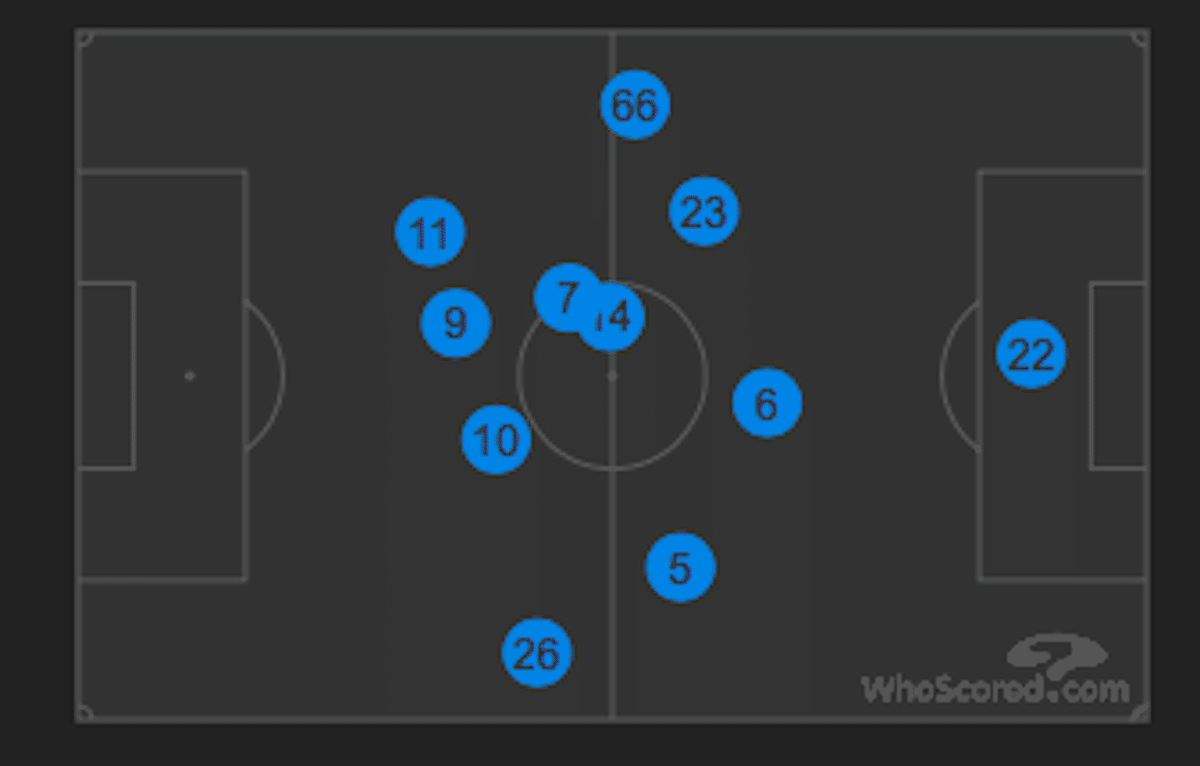 Liverpool's unique defensive set-up greatly influenced their attacking potency against Brighton. As the above average positions graphic (couresty of ) shows, with Can and Wijnaldum playing in advanced, wide defensive roles, the Reds were able to keep both wing-backs high to maintain width, get their most creative player (Coutinho) into advanced positions, and still field a genuine front two.

Faced, as the were against Brighton, with a side aiming to defend deep, limit pace and frustrate, Liverpool created too may options and covered too great an acreage for the defending side to contain. 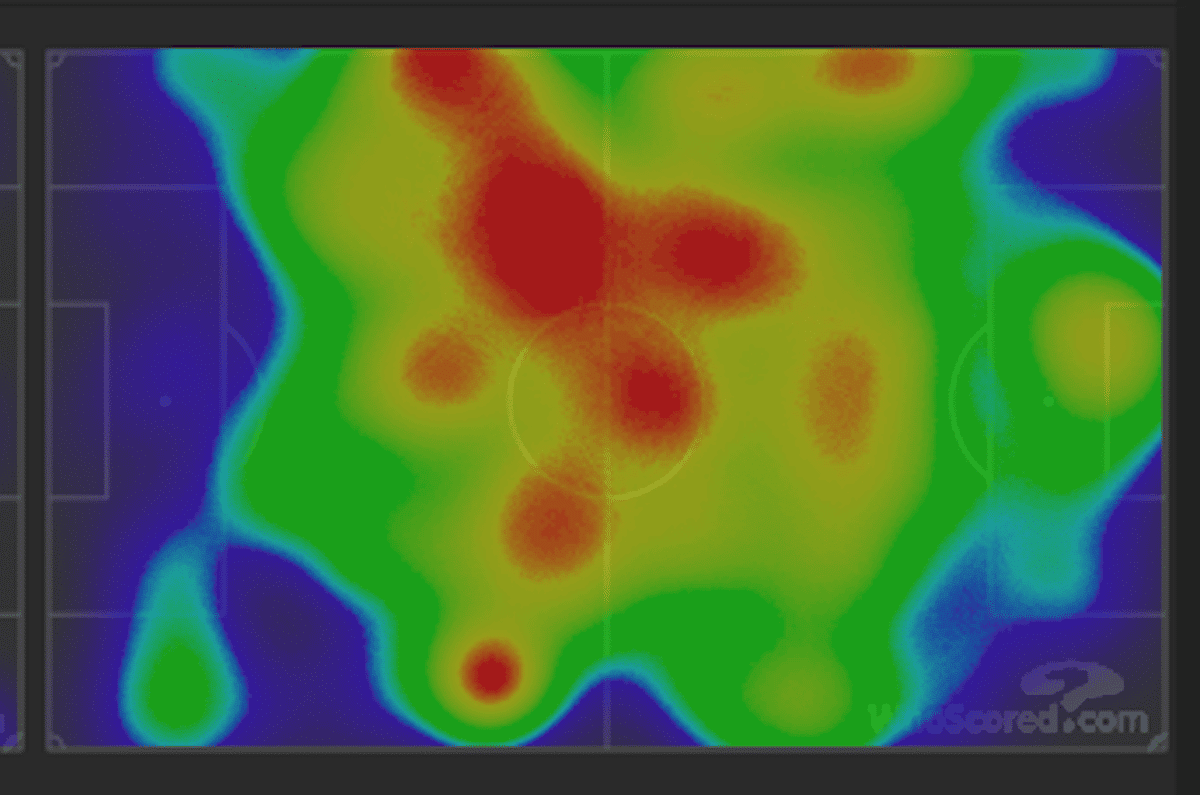 And Can's influence in particular is shown by the above heat map (again, couresty of Bayer Leverkusen star was occupying, carrying the ball forward from his defensive station and linking with team-mates.

Klopp's unique 3-5-2 may not be the system for every occasion, and stronger opposition is likely to see specialist defenders picked for defensive roles. But against an inferior side intent on stifling their attacking flow, this shape and the personnel used could be the perfect go-to.