Against Manchester United, Mohamed Salah was noticeable for what he didn’t do.

The Egyptian was largely anonymous. He struggled to get involved and managed just one shot on goal by the time was replaced by Divock Origi after 79 minutes.

It is not the first time this season Salah has been rendered ineffective by an organised defence. In the Champions League against Bayern Munich last week, it was a similar story. In last month’s defeat at Manchester City he was kept quiet, too.

Many have suggested the 26-year-old simply hasn't turned up against the best sides this season. But it seems there is a more concerning trend developing. Salah was on the periphery, not just when playing United and City, but against Leicester City and West Ham United.

Over his last ten appearances in all competitions, Salah has scored just three goals (excluding penalties). He has managed just 2.3 shots per game, significantly below his season average of 3.46. And his xG per 90 is down at 0.52 (0.64 over the season).

This could be put down to a bad run of form or a lack of confidence. Teams certainly target Salah and attempt to nullify him. That is an inevitable consequence of his superb first season at Liverpool, in which he scored 44 goals.

A slump in form at some point is to be expected. But the trends that have emerged over the last few weeks will be a concern for Liverpool. Salah appears deprived of service and attempts to force something when he has the ball. His contribution has suffered as a result.

Salah seemed infallible last season, he scored at a remarkable rate and rarely turned in a below-par performance. For most of this campaign, too, he has been excellent. That should not be forgotten.

With 17 Premier League goals, he is the joint top scorer in the division and has confounded those critics who predictably, and tiresomely, claimed he would be a “one-season wonder”.

Of late, though, Salah has hit top form only sporadically. In the Premier League, since the turn of the year, his contribution has drastically declined. He has gone from creating an average of 0.51 big chances per 90 to just 0.14. And his xA per 90, previously at 0.3, is down at 0.12.

Interestingly, Salah is attempting more take-ons (3.64 per 90 compared with 3.26) but completing fewer (1.89 per 90 compared with 2.08). It suggests that he is being crowded out by defenders and receiving the ball in positions which make it difficult for him to fashion a chance.

It is, perhaps, a consequence of a slight change in approach from Jürgen Klopp, known for so long for his “heavy metal” style of play. The pressing was intense, the tempo often absurdly fast. Attacking players benefited from it.

This season, though, Liverpool have been more conservative in key games. Think back to the 0-0 draw with Manchester City at Anfield in October. The recent goalless draws against Bayern and United are evidence of this, too.

Liverpool’s passing, particularly in midfield, is safer. The tempo of the game is slower and it can often mean Klopp’s side struggle to break down packed defences, as was the case on Sunday.

A midfield three of Jordan Henderson, Fabinho and Georginio Wijnaldum was solid, dependable, but not dynamic. There appeared a disconnect between them and the front trio of Sadio Mané, Daniel Sturridge – who replaced Firmino early on – and Salah.

Whereas in the past, Salah was helped by the playmaking ability of Philippe Coutinho and the surging runs from midfield of Alex Oxlade-Chamberlain, he is now left to collect the ball and face a set defence. 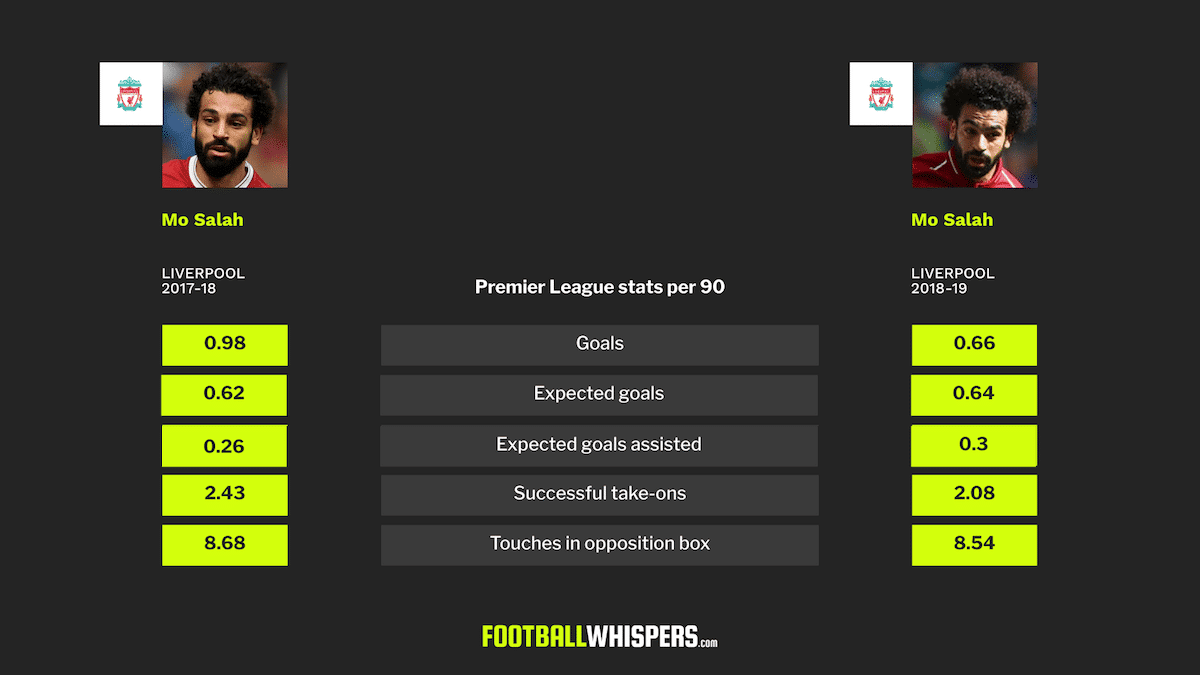 It may be that Klopp must tweak things to once again get the best out of his top scorer.

“Mo knows he can play better than he did today… we know he can,” Klopp said after the United game. “Two weeks ago we played against Bournemouth and he was unbelievable.

“In big games, against Bayern he was up against (David) Alaba who is a world-class player himself. It's about how we use him, how we play him, all that stuff. Today obviously Lindelof and Shaw together did a pretty good job.”

The key for Salah now will be to work out a way of evading defenders who have set out with the intention of stopping him.

With 11 league games still to play in a close title race and an upcoming Champions League last-16 decider against Bayern, it is crucial that he and his teammates find a solution.