Jürgen, what's happened, man? You used to be cool. The Liverpool team at the minute, this isn't you. This isn't post-watershed heavy metal. This is listening to Radio 4 on a Sunday afternoon with a warm cocoa (coffee will keep you up late, you claim).

There was a time not so long ago that you and your guys would have gone to Serbia and run riot. Instead, you've returned from your trip with a few nice photos and telling everyone how pleasant the locals are: “Did you see that display? Wasn't that impressive?”

This isn't what Liverpool under your watch have been. This isn't what your Liverpool should be. So kick off the slippers, put down that cocoa, turn off Radio 4 and get back to what made the Reds one of the most feared sides in Europe.

Surely you're making too much of one defeat, we hear you cry. Well not exactly. Liverpool's loss in Serbia to Crvena Zvezda isn't the issue here. Why they lost the game is.

The defeat brought into sharp focus the issues that have plagued the Reds in recent weeks. Their midfield lacked structure. Their attack lacked fluidity. And it needs rectifying.

A huge overhaul isn't required. A few tactical tweaks and Liverpool can quickly return to their swashbuckling best. But it requires Klopp to be bold and to ditch the 4-3-3 shape that he's been wedded to for much of his time at Anfield.

So what's the problem?

Last season, as they proved time and time again, Liverpool could be devastating in attack. They would swarm opposition sides, win possession high up the pitch and, fairly often, give the ball to Mohamed Salah. He would then do the rest.

It sounds simple enough. The reality, of course, was far more complicated. The Reds players didn't simply charge manically at opponents, they laid traps for them to fall into. And when they had the ball, there was a defined structure to their attacks.

Salah would often move into the centre. Roberto Firmino would drop back into a deeper role. The right-sided midfielder – Alex Oxlade-Chamberlain was excellent in this role – would then shift out to the flank the Egyptian had occupied.

It may have appeared chaotic yet it was choreographed and extremely effective.

However, this season it hasn't been and it's largely because of who has been placed on the right of the midfield three. Quite simply, nobody can pull it off like Oxlade-Chamberlain.

James Milner is a workhorse, one who started the campaign in excellent form. But when he moves into the wide position and receives the ball, he lacks the ability to break defensive structures and reverts to putting hopeful crosses into the penalty area.

In years past Adam Lallana was effective in the role but injuries have taken their toll and he no longer has the same dynamism to his game. And Jordan Henderson… well his limitations make him completely unsuited for the job.

Yet Klopp has preserved. He could point to the fact his side are only two points off the top of the Premier League summit and are second a tricky Champions League group as proof the system is still working. Their underlying numbers, however, suggest otherwise.

Since Liverpool's 1-0 win over Brighton and Hove Albion on August 28, the Reds have played eight games in the top flight. Five of these have resulted in victory, three have ended as draws.

The Reds have scored 14 goals in these matches and their xG (expected goals) of 11.7 is a sign that they are creating good quality chances – although it's only the tenth highest total among Premier League sides.

Yet these opportunities are coming from moments of individual brilliance or mistakes from opponents. Liverpool have not been carving defences open with any regularity for over two months.

Tellingly, in the time period in question, Klopp's side have created just nine big chances in the Premier League. According to data from the Football Whispers lab, that tally is bettered by twelve other top-flight sides.

Liverpool will still win more games than they lose and draw. Their quality across the pitch dictates that. But if they're to have ambitions of winning the title or going deep once again in the Champions League, the Reds boss must revigorate his side.

It's simple; 4-2-3-1. Klopp has already used the shape twice this season, at home to Crvena Zvezda and against Cardiff City. In each of those games, the Reds scored four goals.

The opposition wasn't the strongest and that must be taken into account, however, there was far greater fluidity in the final third and much more of a goal threat, as detailed in depth here.

It also allowed Klopp to put Salah, Firmino, Sadio Mané and Xherdan Shaqiri in the same side. The latter occupied the right flank, a position he is comfortable in, while Salah moved into the central striking role. Firmino dropped deep and Mané stayed on the left. Square pegs, square holes.

The other benefit of the system is that it should, if implemented correctly, bring out the best of two Liverpool summer signings; Fabinho and Naby Keïta.

The former shone at Monaco on the right of a two-man midfield pivot while the Guniea international made his name at RB Leipzig on the left.

Liverpool fans have yet to see the best of Keïta, partly due to injury, partly because of indifferent form, and partly because he was used on the left of a midfield three at the start of the campaign.

It limited his impact. As the heat maps below show, put him in the centre and he can dominate across the pitch. 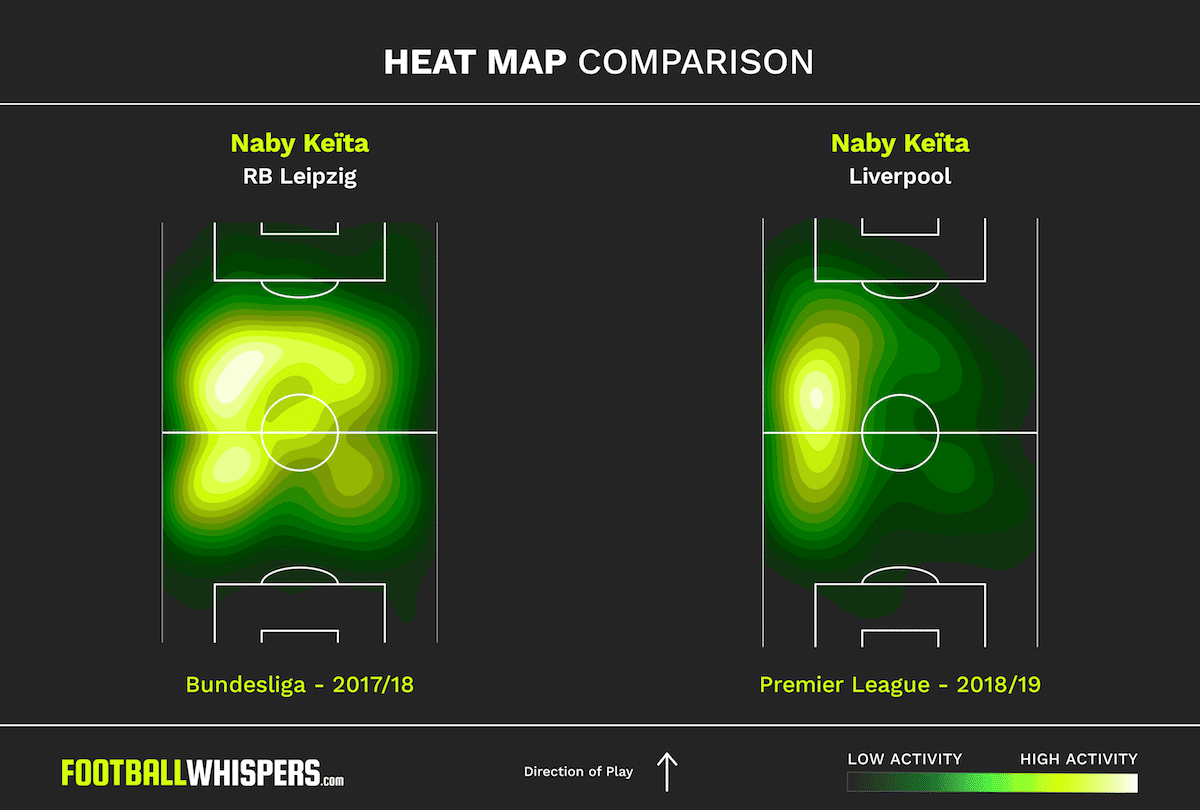 A switch to 4-2-3-1 would not only allow Liverpool greater freedom when playing out from the back – with two passing options instead of one – but it would free Keïta to do what he does best.

Last term for Leipzig, the 23-year-old often collected possession from one of the German club's centre-backs and marauded forward. He would slalom past challenges and in an instant would have turned defence in attack.

That has rarely happened since his move to Anfield. So far at Liverpool, he has completed 1.02 take-ons per 90 minutes in the Premier League. In the Bundesliga last season, he averaged 3.07. The drop off has been stark.

Klopp will know these figures. He will also know his side's attacking efficiency has dropped. And, you suspect, he knows what the solution to the problems are. He simply needs to be brave and implement them.