In August 2017, Liverpool announced they had agreed to sign Naby Keïta from RB Leipzig the following summer. It was viewed as an excellent piece of business and Reds fans were assured he would be well worth the £48million fee.

When he arrived on Merseyside, after another solid season in the Bundesliga and with transfer fees continuing to balloon, his signing appeared to be a steal.

Now, who knows? Injuries haven’t helped but the Guinean has spent an awful lot of time on the bench. And, despite a reputation as a dribble king, he’s completed just five take-ons in the league this season. In his two years in the Bundesliga, he’d beat that in two games.

Successful take-ons per 90, in the league

Klopp was full of praise for Keïta when the deal was first announced. “He is young, he is full of football skills, very stable, very good in small spaces, endurance-wise fantastic, quick, good finishes, good runs in the box,” he said of the midfielder.

“So that’s a package that’s really interesting and that’s why we thought we should take him.”

He isn’t just dribbling less, but he’s playing a more restrictive position than at Leipzig, keeping him away from the centre of the pitch 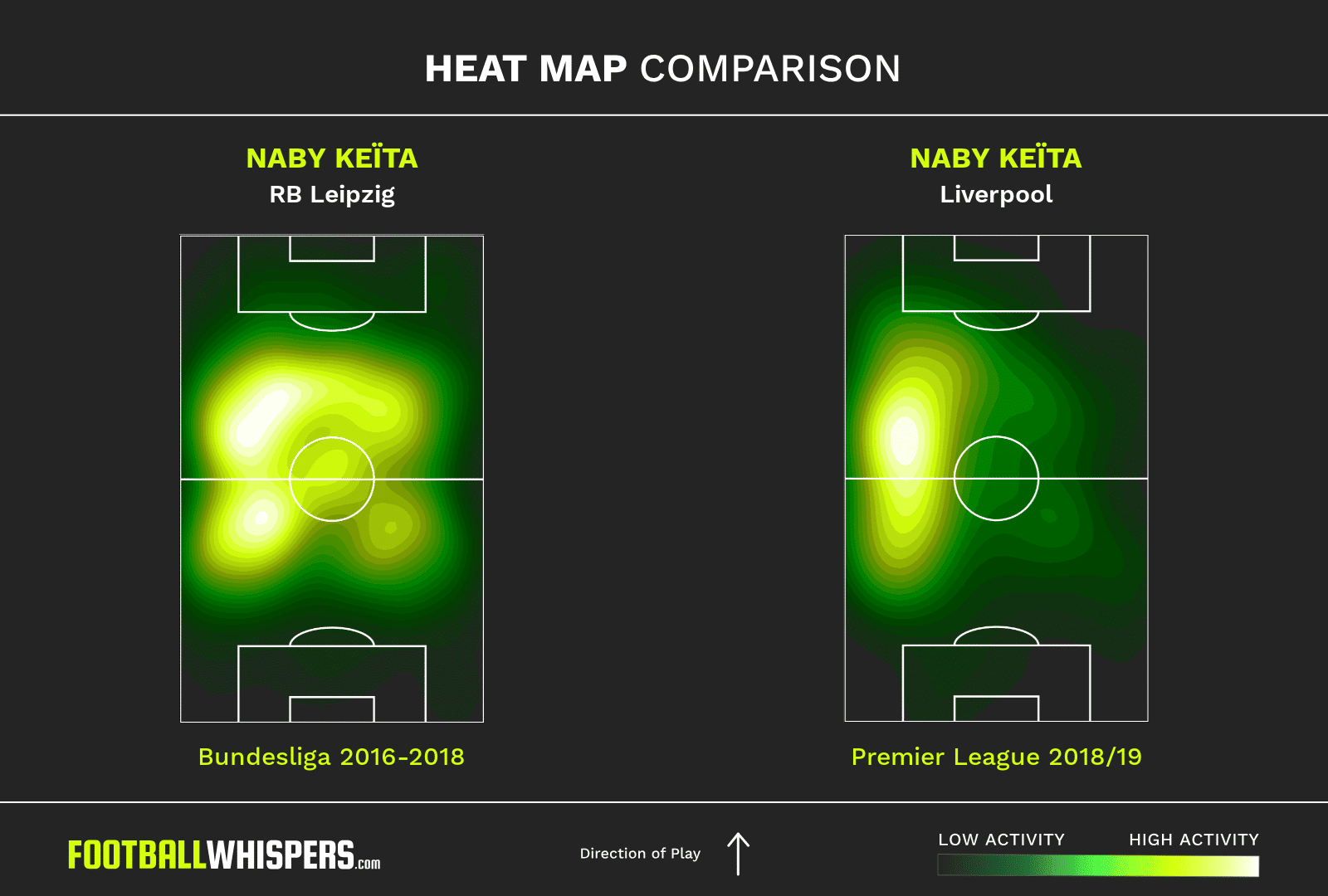 Given Keïta isn’t doing the things that made him so eye-catching in the Bundesliga, is there an argument that his talents are being wasted?

The part of his game that Keïta considers the most important is, in his words, “to win the ball back and then distribute the ball to my strikers and create chances for them to score.”

He’s still doing part of this. His defensive actions have dipped slightly since joining Liverpool, from 4.81 to 3.32 per 90 minutes, with most of the drop-off coming from interceptions.

In the Premier League, he’s less involved in all facets of play, though. We can see on his Football Whispers persona radar that, as a proportion of his whole game, his defensive duties haven’t dropped hugely. His chance creation is also a slightly larger share of his game, even if it’s dropped in absolute terms.

One wonders what Keïta himself makes of this change. In his final season at Leipzig, he watched every one of Liverpool’s games to get a sense of how they played.

“Bobby likes to come a little deeper and join in, so he wants it to feet,” he explained as an example, earlier this year.

“I knew all this before I came, then, of course, you have to assimilate the manager’s ideas, but I had an idea of how I could help to get the team playing and join in with moves.”

All of this is feeding into a perception that Liverpool are less intense in attack this season. Klopp has perhaps decided that it makes more sense to tighten up defensively and sacrifice some of the mayhem in attack. His side are averaging two fewer shots per game than in 2017/18 – although the expected goals value of these are roughly the same.

“He will be a massive player in the future for LFC and he is already,” he said in late November. “He is now really fit, he looks sharp in training, but as it is at a club like ours sometimes you have to wait a bit longer for the moment.

“And when you get the moment, then you have to be ready. That’s how it is. He is an outstanding player and we are happy to have him.”

Now that he’s getting back to full fitness maybe we’ll get to see the Keïta of old. Maybe.