Jurgen Klopp has stated he is sick of Liverpool conceding the same goals over and over again so what is he going to do about it?

It is said ‘insanity is doing the same thing over and over and expecting a different result’ so with that in mind, it is clear something has to change for the Reds and quickly after another night on Tuesday where their defensive shortcomings were exposed once again.

Liverpool return to the King Power Stadium on Saturday evening looking to avenge Tuesday's Carabao Cup defeat to the hands of Leicester City, where the Foxes triumphed 2-0 thanks to goals from Shinji Okazaki and Islam Slimani.

That defeat means Reds are now without a win in four games and pressure is beginning to mount on manager Jürgen Klopp with his team making the same mistakes on an almost weekly basis.

The manager hit out at his defence when fielding questions post match. After witnessing his side concede from a corner and a throw-in, he told Sky Sports: “I'm sick of goals like this to be honest, you cannot play football and do that.”

Liverpool's inability to defend set pieces is well documented and teams are taking full advantage of it once again this season. Much to the frustration of fans and the the manager.

The Reds were yet again slow to press Leicester which allowed them to loft the ball back into the area. They then won two aerial duels and Okazaki fired home after Jordan Henderson failed to track him during the third phase of play.

It was almost a carbon copy of the goal Liverpool conceded at the hands of Burnley over the weekend.

More worryingly, however, it was the latest in a long line of instances where players failing to do their most basic job has resulted in Liverpool's backline being breached.

While the Reds' attack papered over the defensive cracks earlier in the season it's failed to do so in recent matches. Since the 4-0 destruction of Arsenal in August, they have scored just three goals in four matches.

Their bad run of form coincides with Sadio Mané being suspended. In the 200 minutes of football he's missed Liverpool have found the back of the net once. When he's playing, however, they have scored a goal every 34 minutes.

For all of Liverpool's dominance in matches against Sevilla, Burnley and Leicester, they scored just three goals despite having 80 shots. However, scratch below the surface and you'll see it's not as black and white as some might suggest. 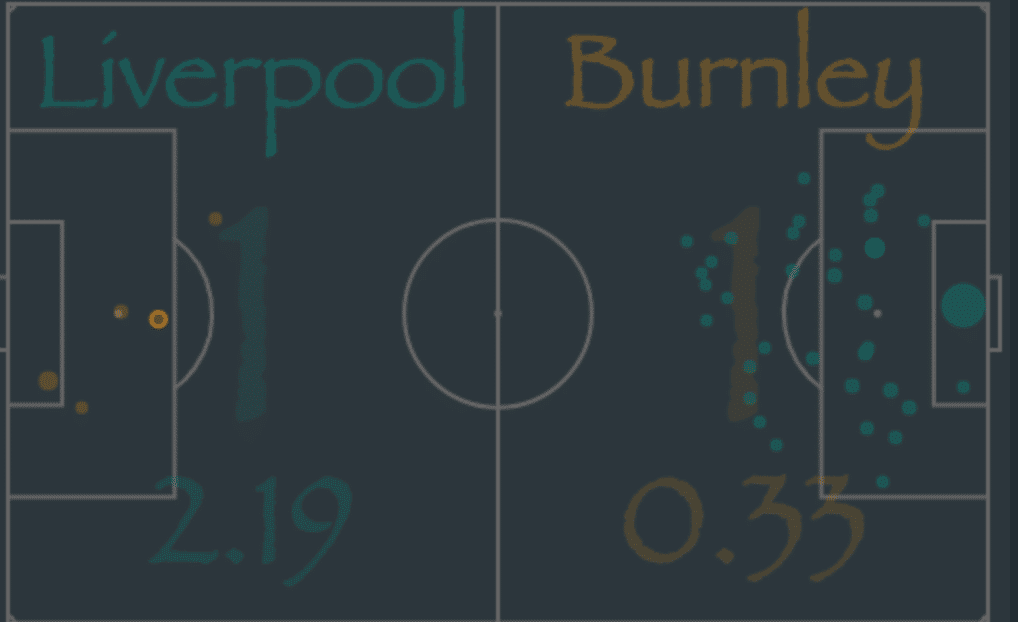 The expected goals (xG) graphic above, via understat.com, paints an interesting picture. Liverpool were in control but showed very little patience when within 30-yards of goal. Instead of looking to work the ball into the penalty area they'd take a shot from distance. Of their 35 shots on the day 15 came from outside the penalty area and they managed just two inside the six-yard box

Those expecting Mané's return – his suspension ends after Saturday's re-match at Leicester – to result in a quick fix might be in for a harsh realisation.

Klopp's side aren't creating clear-cut chances and they're failing to show resiliency, even with the former Southampton man starting. Liverpool are conceding a goal every 61 minutes with Mané on the pitch.

Is it now time for a change? At least for the short-term in an attempt to halt the bad run of form.

Not in manager, like some are suggesting, but a tweak to the system. With Mané, Barcelona transfer target Philippe Coutinho, Roberto Firmino and Mo Salah in the team Liverpool will continue to create chances. They might not be as clinical as many hope for but the law of averages suggests they'll score most games with that quartet on the pitch.

They need to stop conceding, though, so their lack of ruthlessness isn't quite as evident. Switching to a 3-4-3 formation may be viewed as Klopp going into safe mode but adding balance to his side may benefit them going forward as well as defensively. 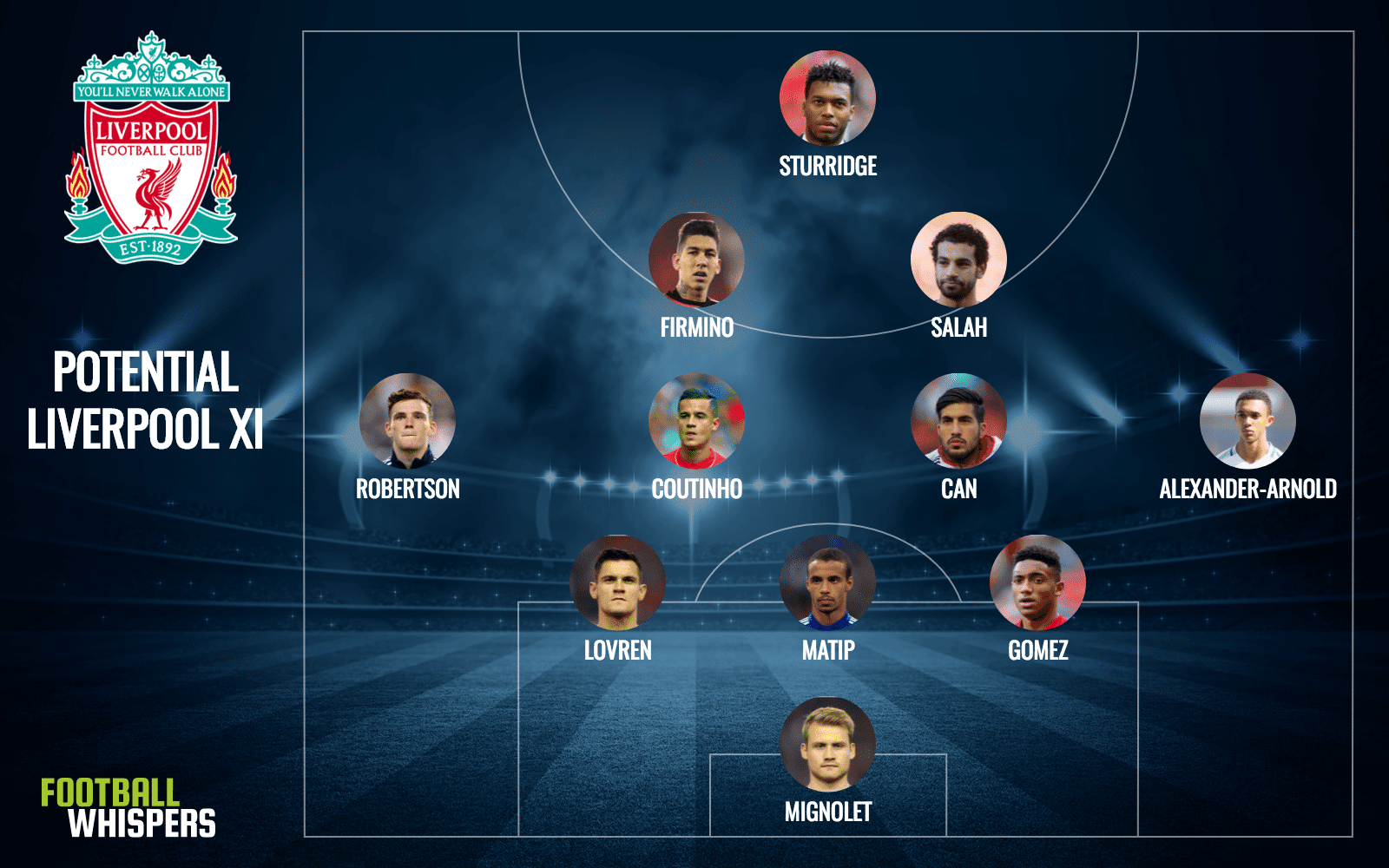 The team above is one which could do well against Leicester. When Mané returns he'd replace Firmino as the man behind the striker and the Brazilian would go back to leading the line.

This XI is by no means perfect but it does three things.

It allows the wing-backs to focus more on being an attacking outlet and stretching the play, safe in the knowledge they aren't expected to be in two places at once.

A lot of the time there's a turnover of possession high up the pitch; Liverpool's full-backs had been supporting the attack but are now expected to be in the defensive third in the blink of an eye.

As obvious as it sounds, using three centre-backs gives the defence more cover. Dejan Lovren isn't the most natural when defending the channels but it's less of an issue when there's two others sweeping up in central areas.

It would also help the team defend aerial balls. In recent matches the spacing of the back four has been a problem and resulted in goals for Burnley and Leicester. One more body back there, on paper at least, solves the issue of huge gaps between players.

It also works in Liverpool's favour when it comes to aerial duels because the opposition won't be able to target the smaller full-backs with diagonal balls like Burnley did.

And finally, Liverpool would have key players in central areas on the pitch. Joël Matip has the ability to act almost as a defensive midfielder and can push on when Liverpool are dominating possession.

This allows Coutinho a free role to create something for Mané, Firmino and Salah who will all be interchanging and popping up all over the place.

It's unlikely Klopp will make such drastic changes. The manager may feel it's unnecessary with Liverpool not giving up many chances to the opposition and the xG against his team being fairly low. Burnley's xG was 0.33 and Leicester's was 0.38. A little bit more luck here and there and those negative results turn into positives.

With Liverpool doubtless sticking to their 4-3-3 formation, with Henderson acting as the deepest midfielder, Leicester should do what they do best and look to punish the visitors on the counter-attack.

With Jamie Vardy – who has a knack for scoring goals against Liverpool at home – and Okazaki starting in attack they have the pace to threaten a high defensive line if balls are played in over the top.

If Liverpool manage to repel this, Craig Shakespeare can bring Slimani off of the bench and look to bully Liverpool aerially. It's kind of a win-win for the Leicester manager.

The Foxes would be wise to start Vicente Iborra again. His physicality and presence could unsettle Liverpool just as it did in the Carabao Cup.

Shakespeare is still yet to lose when facing Klopp and could well extend that streak to three meetings on Saturday evening if he gets his tactics spot on.