Pep Guardiola looked to flex his innovative muscles against Liverpool at the Etihad on Tuesday night, with Manchester City needing something special to progress into the semi-finals of the Champions League. But it was Jürgen Klopp who put on a tactical clinic against the Catalan coach, yet again.

Klopp is portrayed by the media as an idealist, a manager who won’t stray from from his principles. It’s often implied that the former Borussia Dortmund boss has no plan B.

Sky Sports pundit Gary Neville took to Twitter last week to say he felt as though Liverpool couldn’t challenge for the title because it would be impossible for the Reds to play their full-throttle style in every single match, not with Europe to contend with as well.

However, Liverpool don’t play that way in every single match: it’s just their more eye-catching performances tend to be in games they’ve blitzed the opposition in. In a quixotic world there’s no doubt the Stuttgart native would like to play that way all the time, and in the past he attempted it while in Germany, but he’s much more pragmatic now.

There’s a misconception that Klopp relies on passion man-management to inspire his players. To some extent, it’s true: his team give him 110 per cent because of how he is as a person, but he’s much more switched on tactically than he’s given credit for, and it’s time people recognise that. He can function without his Spotify Workout playlists and he showed it at the Etihad.

The home side had Liverpool chasing shadows in the first half. At times it looked like City were two or three steps ahead of their counterparts in red. Guardiola’s decision to go for broke and field as many forward players as possible appeared to be paying dividends, and it looked a question of when and not if they’d break the resolve of their visitors.

In the opening 45 minutes, those in blue were relentless and they lived up to their tag of best pressing side in Europe. They had Liverpool pinned in their own half and smothered all counter-attack opportunities.

Bernardo Silva hit the woodwork with a superb effort and Leroy Sane had a goal wrongly disallowed. In his post-match press conference, Klopp admitted his side were fortunate to only go in 1-0 down: “They could have scored two or three goals in the first half but it was 100 percent clear that if we won the ball we’d have an opportunity.”

The Liverpool boss used the half-time break to make a switch to his system, one he thought would give his side side the best chance of engineering a goalscoring opportunity if there was a regain of possession in the middle third.

Roberto Firmino was shifted to the left of the front three, Sadio Mané moved over to the right, and Mohamed Salah took up a central position. On paper, it appeared to be a defensive move; the Egyptian is a lot of things but he's not the most diligent when it comes to defensive work, not when compared to the other two Liverpool forwards at least.

Firmino offered Andrew Robertson more protection down the left and Mané's pace helped combat Sané – the Senegalese speedster covered 11.55km of ground against the Premier League champions-elect, the fourth highest on the night.

But the change to how the front three positioned themselves was also done so that Liverpool could make the most of the fact Fernandinho was playing two positions for the home side.

When Manchester City weren't in possession, the Brazilian would drop into defence alongside Nicolás Otamendi and Aymeric Laporte. He'd then aggressively look to press the ball if it was played forward, almost operating as a defensive midfielder at this point. Liverpool had to hit City during this transition from centre-back to midfielder. Getting their No.11 into central areas was one way of doing this.

Liverpool's opener on the night was perfectly executed. 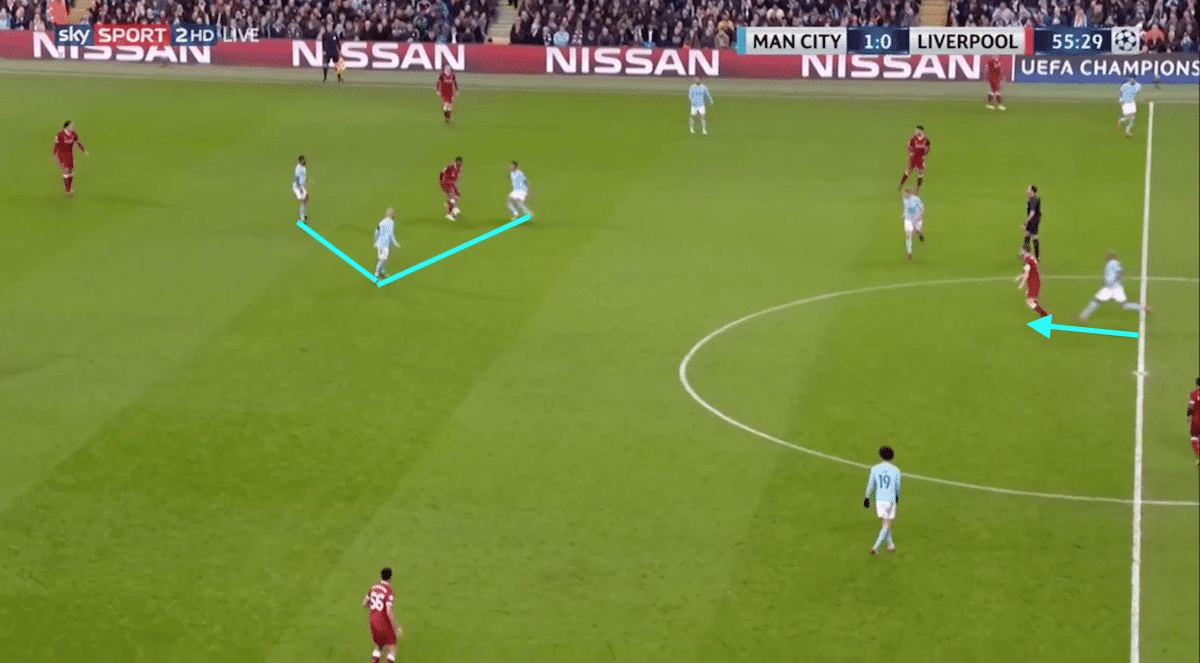 Georginio Wijnaldum, being deployed as the deepest Liverpool midfielder, picks the ball up and shows a lot of bravery – which was one the potential keys to success highlighted in our recent feature on the No.5. City are looking to dictate where he can play a pass. They've closed up the pass to Dejan Lovren and have players anticipating passes to James Milner and Andrew Robertson.

The former Newcastle United man feints to pass to to Milner in the centre of the pitch and this draws Fernandinho out from his centre-back role. Wijnaldum then plays the ball to Alex Oxlade-Chamberlain, who finds himself in space after Kevin de Bruyne shuffles over to put a squeeze on Milner. 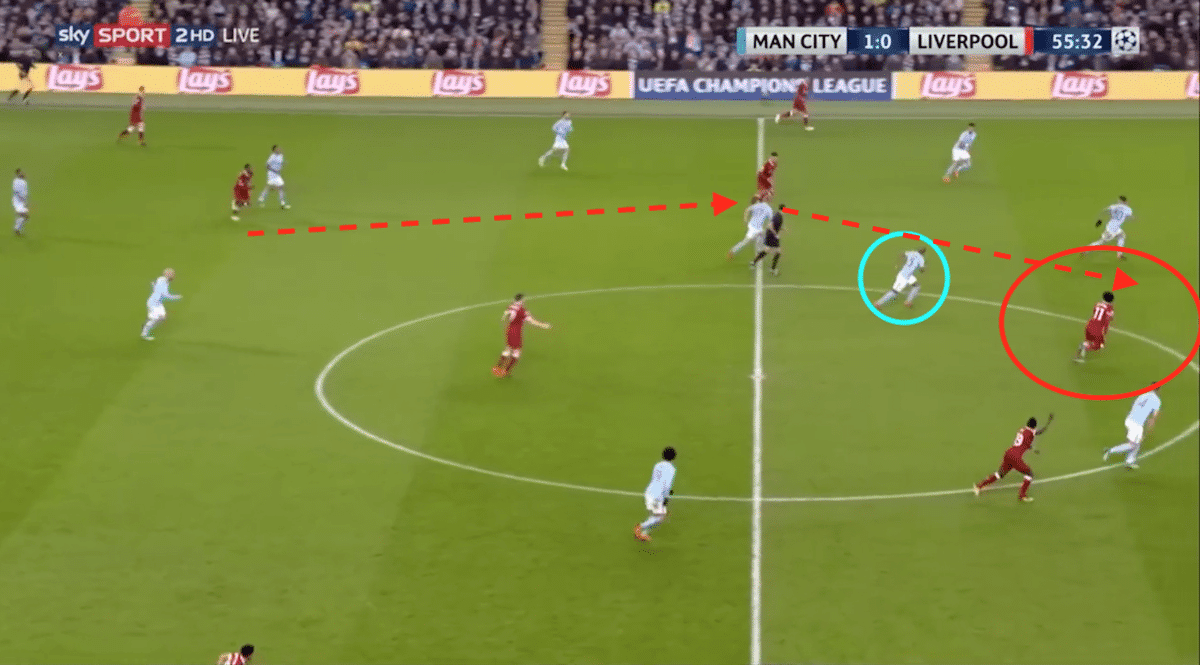 Oxlade-Chamberlain, arguably the ideal player for transition football, plays an early pass to Salah. The Egyptian looks to exploit the space between Otamendi and Laporte, with Fernandinho still struggling to get back into position.

Afterwards, Klopp said that the “Champions League is not about perfection, it’s about the result.” While he has a point, Liverpool's opener was picture perfect. It showed he'd sussed out a way to punish Guardiola's decision to have a key figure in the team playing a number of roles.

There was nothing passionate about the tweak. It was calculated and showed that Klopp has tactically bested a manager many consider to be peerless.

The Liverpool team is still maturing and far from the finished article, something the manager acknowledged after the win at the Etihad: “We're still in a development phase, but we're already a good team.” But with Klopp now seemingly much more self-aware and pro-active, as opposed to reactive, the Reds have it in them to not just blow teams away, but to outsmart the best of the best.