Liverpool kicked their 2017/18 Premier League campaign off with an entertaining 3-3 draw with Watford. It’s not been the summer of change fans had hoped for but Mohamed Salah’s arrival gives the Reds something different in attack while the Philippe Coutinho shaped hole in midfield was noticeable.

Despite these two big changes, though, supporters of Jürgen Klopp’s men could have been forgiven for feeling as though it was groundhog day.

Liverpool barely flexed their attacking muscle but still managed to find the back of the net on three occasions. It was their defensive performance, as a team, which left with a sense of deja vu. Their inability to defend set pieces is well known but this weakness was there for all to see at Vicarage Road.

The Hornets capitalised on Liverpool’s statuesque defending during corner kicks to score two of their three goals and deprive the Reds of what would have been three fortunate points to kick the season off.

Following on from the match, Jamie’s Carragher and Redknapp had a heated debate on Sky Sports. The former went as far as to say it was Klopp's fault that winning a corner kick against the Reds was just as good as a penalty while Redknapp was of the belief it was a personnel issue and that better players would see Liverpool improve defensively.

Redknapp said: “I look at that Liverpool back four and there's a reason why they concede so many goals because they're disorganised and they have no leaders at the back. Who wanted to head that ball there (prior to the Watford opener)? Only Watford players.”

However, Carragher disagreed, saying: “On set pieces it's not about the defenders. The way Liverpool are set up – set piece wise – they will always concede goals. No matter which defenders they buy or how much they cost – it won't make a difference.

Redknapp, though, wasn't having any of it, responding: “On average Liverpool conceded around 50 goals a season. If you want to win the Premier League, you've got to be conceding 30-35 goals. So Liverpool need to take 15 goals away.”

He added: “You need people that want to head the ball. If you can get a leader and someone who wants to attack the ball, you won't go from the worst to the best in a year but it will certainly make a difference. And Liverpool win that game if you have a player like Virgil van Dijk at the back. That's what I think and that's why he wants to spend £60m on him.

“If you're Van Dijk's agent you've got another 20 grand a week on his contract after watching that.”

But once again Carragher disagreed, he said: “If Van Dijk was playing instead of Lovren or Matip – he would have been in one of their positions. It comes down to the manager.”

Truth be told, it's probably a mixture of both. The way Liverpool set up during a set piece is down to the manager and his staff. The former Borussia Dortmund coach uses a zonal system. 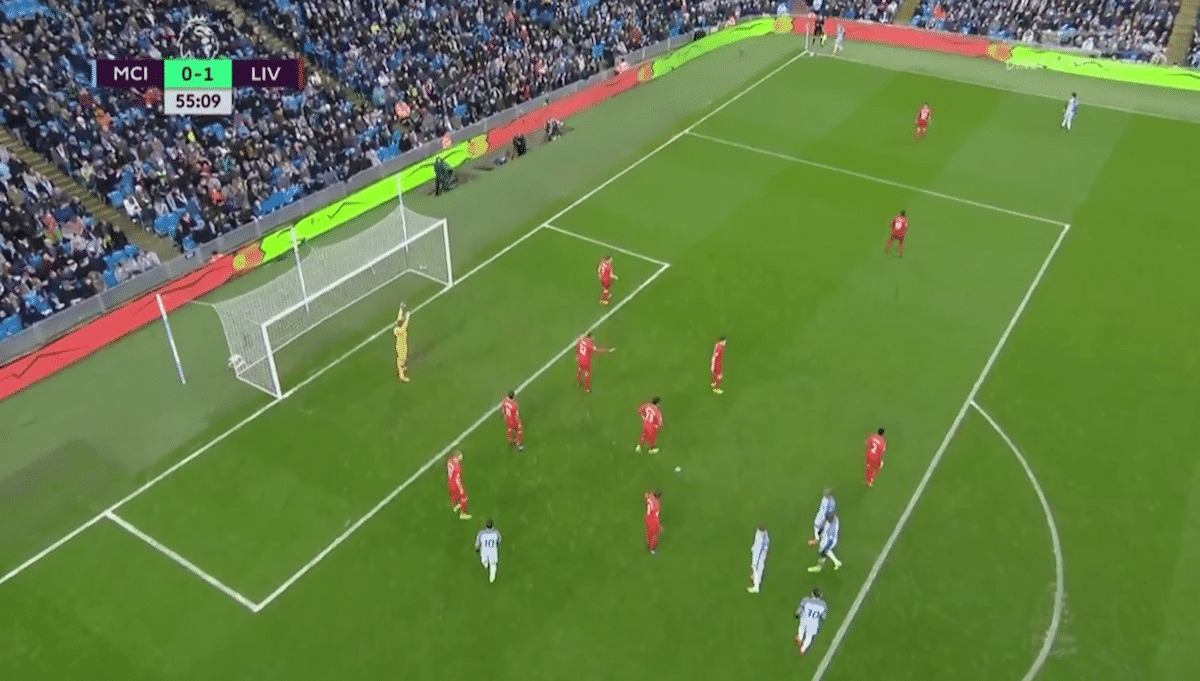 In the picture above, taken from a match against Manchester City last season, you get to see the shape. Across the six-yard line it's centre-back, Roberto Firmino, centre-back.

Firmino, despite not being one of the taller players, is deceptively good in the air and wins his fair share of aerial duels. Anything short the first centre-back will clear, anything long and the second centre-back should be there but anything in the middle is Firmino's area.

Furthermore, anything in Firmino's area should be well within the reach of an advancing goalkeeper.

Liverpool then use their midfielders as blockers in an attempt to disrupt the opposition. Their aim is to stop those arriving late from getting a free run at the static zonal markers. 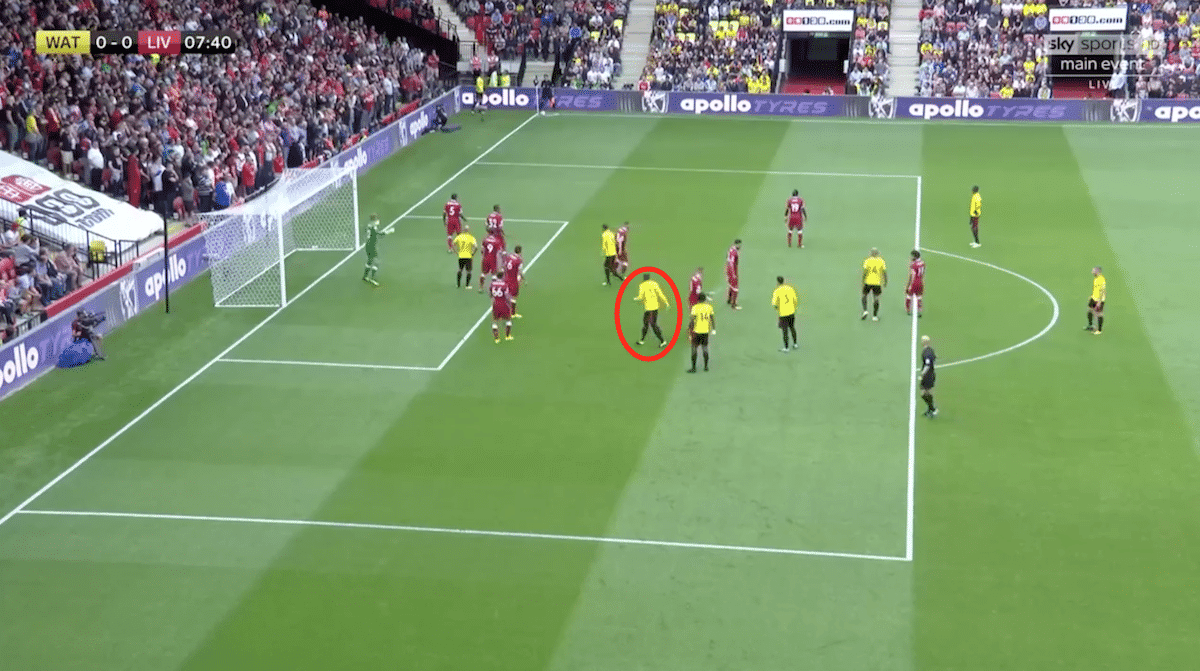 You can see the way Liverpool shape up for the opening goal on Saturday. You have Georginio Wijnaldum defending the front post with Joel Matip, Firmino and Dejan Lovren on or around the six-yard line.

Stefano Okaka, the goalscorer is circled in red, is in behind the blockers. 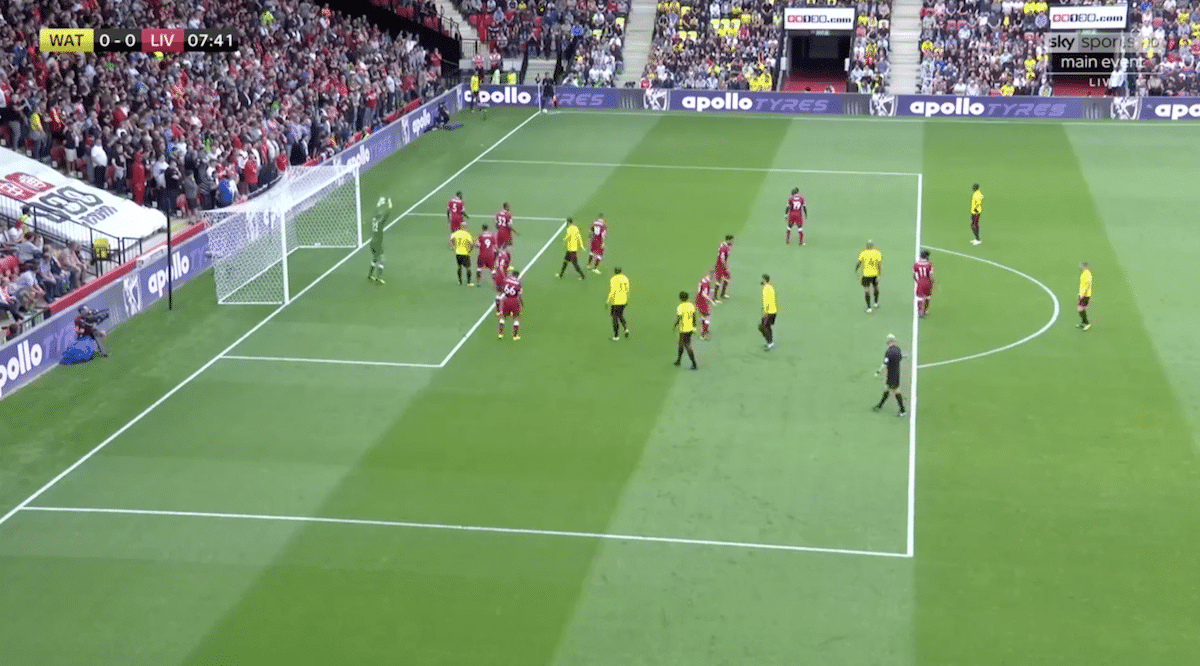 As the corner is about to be taken Dejan Lovren has clocked Okaka and has eyes on him. Emre Can is the man tasked with blocking Younes Kaboul and Jordan Henderson is on close proximity to Miguel Britos. 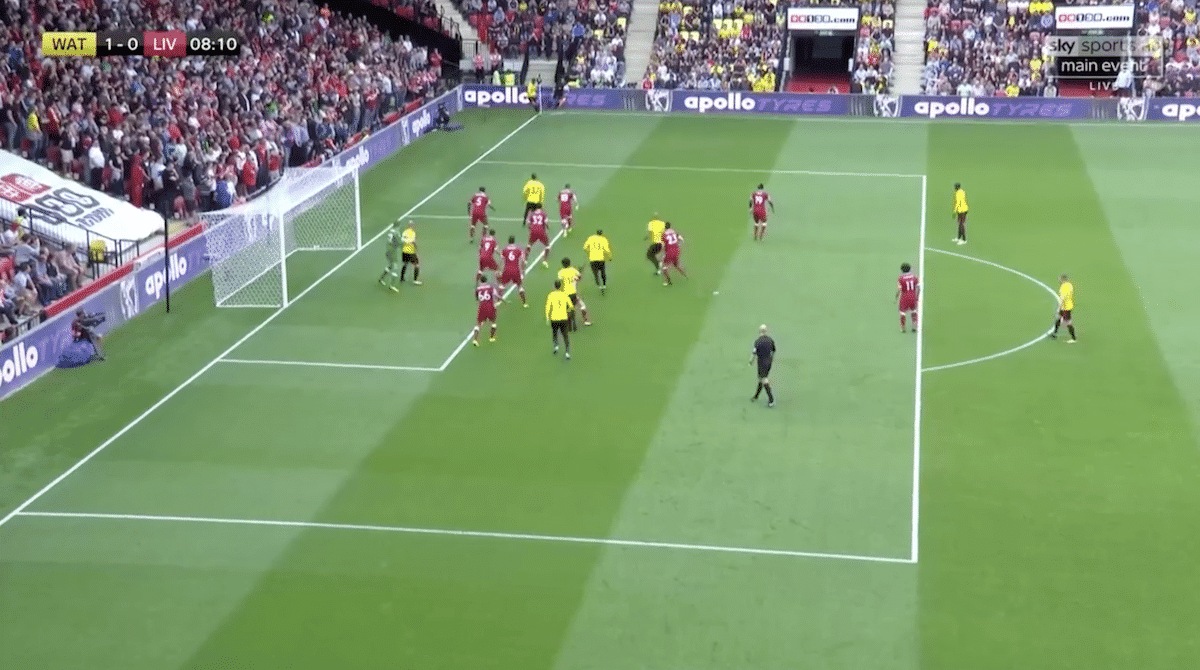 Just as the ball is struck Liverpool are already scrambling. Okaka has left Lovren's zone and is in space in a central area, Henderson is the wrong side of Nathaniel Chalobah, Britos has peeled off into the area Trent Alexander-Arnold is patrolling and Can has failed to get a good block on Kaboul. 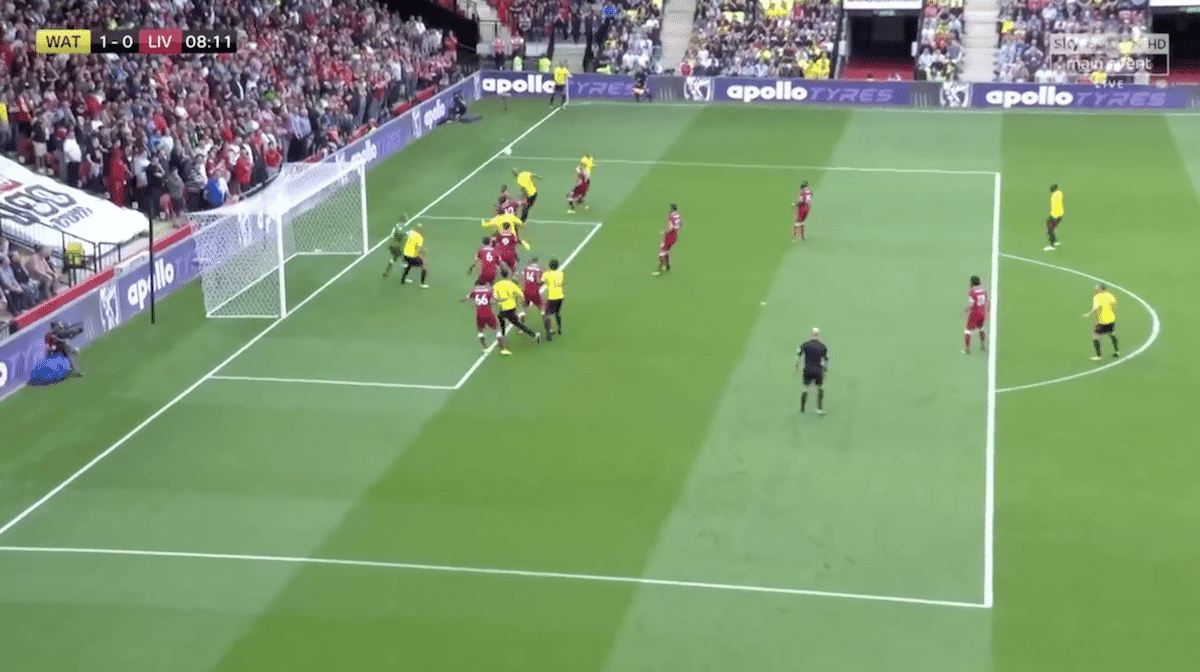 Now, there is an argument to be had to say Nordin Amrabat, the Watford man closest to Simon Mignolet, is offside. And he is. But you have to play to the whistle. Kaboul, who evaded Can, is inches away from connecting at the front post and Okaka, the goalscorer, has drifted into a position between Matip and Firmino.

He's able to head home from four yards out.

One of the first things to note is only the Watford players are jumping for the ball. They've got the run on their Liverpool counterparts and they make the most of it.

Had Liverpool been able to call upon the services of van Dijk, in that system what could he have done? He would have either been in Matip's position or Lovren's. The goal was scored in Firmino's zone. If, you're going off what Redknapp suggests, and you put van Dijk in that area why can't Klopp do that with the two centre-backs he has now.

Lovren has many faults but he wins the ball in the air. He won 3.5 aerial duels per 90 minutes last season which isn't as good as van Dijk's 4.7 but it's considerably better than Matip's 2.2.

It's also worth noting Lovren won eight headers on Saturday so it's not as though he was bullied. However, would van Dijk have been more vocal during the set play to let Firmino know Okaka was on the move?

Liverpool's defensive system during set plays is broken and needs fixing. It can't be ignored. But, as much as the system undoubtedly plays a part in Liverpool conceding so regularly from set pieces, personnel is an issue, too.

The culprit here being Simon Mignolet. Why isn't he coming for a cross which has landed in a central area four yards from his line?

Amrabat is in his way but he's a goalkeeper, if he comes for that and is fouled or obstructed it's likely the referee blows for a freekick.

Firmino could perhaps do better but it's a big ask for him to beat a 6ft 1ins brute of a striker in the air. His ‘keeper should be steaming out there to clear his lines and take out anybody in his path. But he isn't.

While the system often lets Liverpool down, it's more problematic because the individuals in the system don't do their job to the best of their ability. After all, the whole is only as good as the sum of its parts

Mignolet plays a part in this. Last season, the Reds conceded a number of goals from within their six-yard box with the Belgian keeper glued to his line. If the former Sunderland man was more aggressive in his approach how many of those could have been prevented?

However, it's not a one signing fixes all situation. The arrival of van Dijk won't see the Liverpool backline become impenetrable. A number of new faces may see them improve defensively but a tweak in the system may be necessary if it's to be sustainable.