Solihull Moors had threatened to challenge for the top seven over recent weeks but it now looks like they're going to run out of games to achieve that feat. For King's Lynn there is still lots to play for as they face a very real prospect of relegation. Can they grab a vital win here? Find out with our King's Lynn vs Solihull Moors match preview with free tips, predictions and odds mentioned along the way.

Another defeat for King's Lynn

Look, shocks do happen in football but the idea of King's Lynn avoiding defeat against Solihull Moors looks very close to impossible. One side have been on a terrific run of form with Solihull Moors winning their last five matches whilst King's Lynn haven't won in 11; they've lost nine in that period too. If that picture just painted isn't bleak enough for you then let us remind you that last time these sides met – in October – that Solihull Moors absolutely battered King's Lynn.

We suggested our first prediction is as good as guaranteed; this tip is less so but only because we've been seriously bold going for over 4.5 goals. You could play uber safe and go over 2.5 but you'll get significantly shorter odds from your bookmaker. King's Lynn vs Solihull Moors has potential for hitting the required five goal mark too. For starters, that head to head meeting we mentioned in tip one ended in a 5-0 Solihull Moors win. Then there is recent form. Of the last 10 King's Lynn matches four of them have seen at least five goals including their defeat to Wrexham on Saturday that saw eight goals. At the same time, Solihull Moors were winning 4-1 away at Wealdstone. 4.5 goals is a big shout but the value is there to be had.

Solihull Moors to win with ease

If tipping Solihull Moors simply to win isn't doing it for you then picking them up on a minus one goal handicap might; it still has a damn good chance of coming in too. King's Lynn have lost eight of their last 10 games and each of those defeats has been my a margin of at least two goals. Solihull Moors have win their last five. The combined stats reading as 13 goals scored with just three conceded.

King's Lynn are currently four points from safety with two games remaining. That means they need to take something from this game. The trouble is, Solihull Moors have been rather good of late. In fact, they're the form team of the entire National League. It would be a huge shock if King's Lynn can grab three points but, if you're a neutral looking for a game full of goals and the potential of drama then this one is for you. 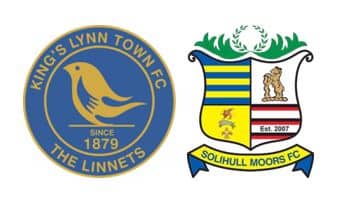