King Faisal could move within two points of their visitors with a win here. Will they have enough about them to take all three points? Find out with our King Faisal vs Great Olympics match preview with free tips, predictions and odds mentioned along the way.

A draw will have to do

King Faisal have not drawn a lot of games this season, they've drawn just five of their 30 league games so far; however, it's important to note that three of those draws came in their last five games alone. King Faisal have struggled to win games the past couple of months; they've won just one of their last 11 games across all competitions. Just like King Faisal, Accra Great Olympics have not exactly enjoyed their best form recently; they suffered six losses in their last 10 games, with just two wins and two draws. These are two struggling teams, we believe that both teams will be level at the end of this match.

Accra Great Olympics have not been able to keep the goals out recently; they have seen their defense breached in eight of their last 10 games, with 15 goals conceded in that 10 game stretch. Conversely, Accra Great Olympics have scored their fair share of goals; as they've averaged exactly one goal per game this season. In the same vein, King Faisal have scored and conceded a lot of goals this season, especially recently; they found the net in all of their last five games, whilst keeping just one clean sheet in their last 16 games. Considering both teams scored in four of King Faisal's last five games, both teams should score.

A midtable matchup but with plenty in the balance

These two sides might be sat in midtable but this game could have big ramifications on the trajectory of their respective seasons. A King Faisal win probably confines both to midtable. A Great Olympics win though would give them a chance to look up and force the hosts to look nervously behind.

King Faisal's struggles continued with a 1:1 draw at Karela United last weekend; they've managed just one win in their last 11 games, with three draws and seven losses. King Faisal sit at 13th on the 18 team table, just three points clear off the relegation zone; they'll hope to go up the table with a win today.

Accra Great Olympics were third on the table in mid-March, having won nine of their first 20 league games; however, they've managed just two wins in 10 games since then, with two draws and six losses. Due to their poor run of form, Accra Great Olympics have dropped to seventh on the Premier League table; they'll hope to get back to winning ways as they take on King Faisal.

A quickfire FAQ on King Faisal vs Great Olympics 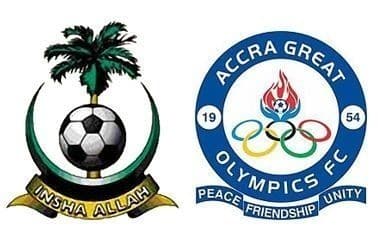